The Morrison government has warned a jump in pay for low income earners could force small businesses already coping with the economic fallout of the global pandemic to cut jobs or staff hours.

In its submission to the annual minimum wage case, which typically updates the pay of about 2.3 million workers each July, the government does not say exactly what the minimum wage should be but highlights the risks of a substantial increase. 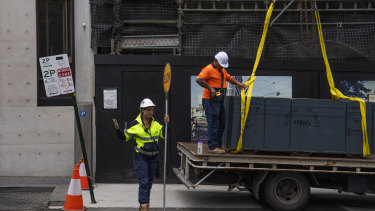 More than two million workers across the country have their pay set relative to the minimum wage.Credit:Louise Kennerley

About 180,000 people in Australia earn the absolute minimum wage of $19.84 an hour but millions more have their pay set relative to it, especially in small businesses, making any movement in the wage a crucial economic lever that ratchet up salary costs.

“Given the current uncertainties in the domestic and international economic outlook, the government therefore urges… a cautious approach,” the government’s submission says.

It urges the independent expert panel which sets the minimum wage to consider the importance of creating jobs and ensuring small businesses remain viable when they deliver this year’s decision in June.

The panel recommended a small 1.75 per cent increase last year.

The Australian Council of Trade Unions, which each year pushes for higher wages, said the government was tacitly suggesting a wage freeze.

The unions want a 3.5 per cent increase, which would take the minimum wage to $20.53 an hour, on the basis that it would let workers spend more and assist the recovery.

JobKeeper ended last month but the government has committed money to support international aviation workers in recognition they have been particularly affected by the pandemic. Overall the government’s wage submission welcomes the improved economy since last year but still suggests the cautious approach because of the global environment.

Businesses have taken a mixed view to the minimum wage case this year, with some joining the government in suggesting caution and others such as Master Grocers Australia going further by explicitly suggesting no wage rise.