The world is hungry for live music, and the Black Eyed Peas are ready to dish up some fun with their 4k interactive event. They talked EXCLUSIVELY with HL about what to expect – and more!

Music, particularly live music, is about “creating moments” for the Black Eyed Peas, and the group – Apl.de.Ap, Taboo, Will.i.am, and newcomer J. Rey Soul – will definitely create some special moments on June 11. For the first time in fourteen months, the Peas will hit the stage and create an extravagant concert experience like no other. By partnering with Melrose Media and streaming platform Eluv.io, the concert (taking place at the Bayfront Park in Miami) will be broadcast around the world, giving fans a unique, interactive show that is sure to bring the fun.

“A lot of the party and energy that Miami is famous for is the same energy that has fueled Black Eyed Peas for 20 years,” Apl.de.ap tells HollywoodLife. The group, who chatted over email, will channel South Beach’s vibe for their first show since releasing 2020’s Translation. The album is a celebration of Latin music and features appearances from Nicky Jam, J Balvin, Maluma, Ozuna, Shakira, and Becky G.

The June 11 show – which will be broadcast on BEPLIVE.com, and can be viewed via mobile, desktop, Apple TV, and Roku – promises some “surprises” and “an much more intimate experience.” The Peas – Apl, Taboo, and Will.i.am – talked with HollywoodLife about the show, their connection to Latin America, and how they felt when they first heard the word “corona” (since their hit “Ritmo” sampled “The Rhythm Of The night” by 90’s dance group Corona.) 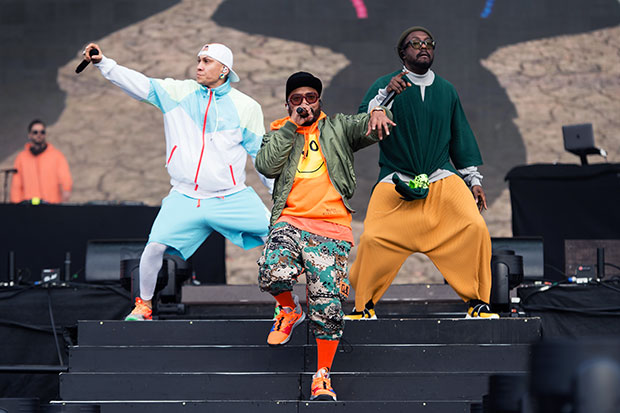 HollywoodLife: On June 11, you’re putting on your first show in support of Translation on BEPLIVE.com. What led to doing a streaming concert? And what can fans expect?

Apl: COVID is still a very real situation, unfortunately. As much as we want to connect with our fans around the world, it’s still unsafe to do so. So we wanted to find a way to bring the experience of our show closer to home. This also being the first time we get to do music off the TRANSLATION album is special, so we wanted to share it with everyone.

The show takes place at Bayfront Park in Miami. How excited are you to perform in front of a crowd again? And why did you pick Miami for this event? One would assume it’s because TRANSLATION celebrates Latin music, but does South Beach hold a special place in your heart?

APL: Miami has always been a special place for us. A lot of the party and energy that Miami is famous for is the same energy that has fueled Black Eyed Peas for 20 years. We’re about the positivity, and we’re about the party – so of course, Miami is the perfect place to kick this one off.

Over the past 14-months, we’ve seen streaming shows and they’re quite different than regular in-person concerts. The lack of crowds has been a mood-killer but technology has allowed for some fun visual and interactive effects. Do you plan on any special things for the audience at home – augmented reality, etc.?

Apl: Doing shows during COVID was definitely hard. The Peas have always fed off the crowd’s energy and so much of our music was created to be loud and experienced together. It’s about creating moments. We have a couple of surprises for the PPV audience that won’t be available to the live show. I don’t want to necessarily spoil it, but the experience will allow the viewers to get a much more intimate experience with each of us. I feel like the technology doesn’t override the experience of this show, but will enhance it. 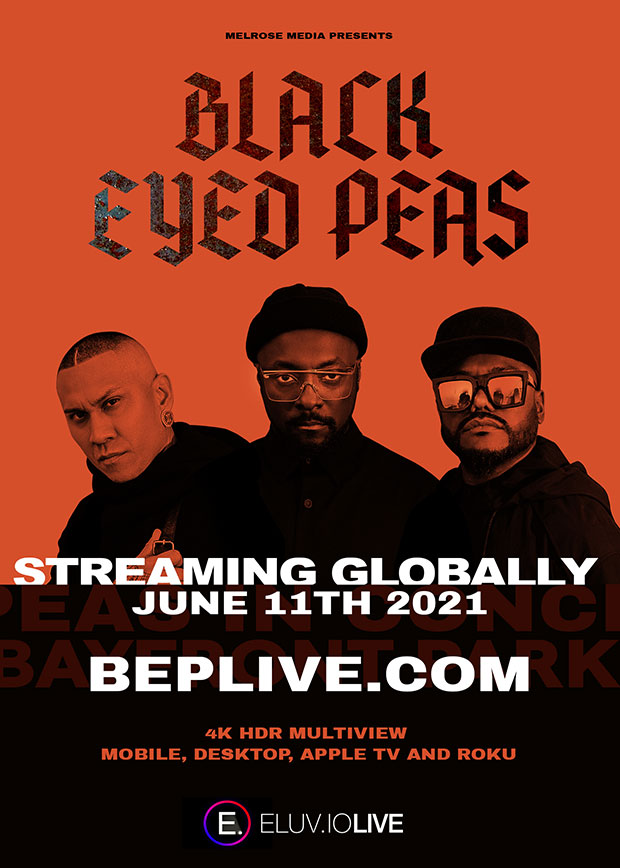 One of the big hits off of Translation is “Ritmo,” which samples “The Rhythm of the Night,” by Corona. You said in a previous interview that the song was that was “already on our hard drive” so I have to ask — what was your first reaction to hearing the word “coronavirus?” Or how suddenly “corona” was a four-letter word?

Taboo: My first reaction to hearing the word “coronavirus” was WTF is going on with the world mama!? How crazy that this all happened right when we started going hard on pushing “RITMO” – suddenly the world shut down and we were quarantined while “Ritmo” was really moving up the charts. But we managed to still release “Mamacita” featuring Ozuna,  “Feel the Beat” featuring Maluma, “No Mañana” featuring El Alfa,  “Vida Loca” featuring Nicky Jam & Tyga,  and our last single off our TRANSLATION album, “Girl Like Me” featuring Shakira.

In that interview, Will.i.am also said that, for almost a good decade, Black Eyed Peas were bigger in Latin America/Spain. What was it about your music that resonated with those fans?

Taboo: It was our music, live shows, frequency of positivity, love, and also bringing that party and celebration to all these countries in South America, Brazil, and Mexico. We didn’t have to sing in Spanish for those folks to feel the vibes.

2020 saw the first-ever all-Spanish album reach No. 1 on the Billboard 200. As a band with history in the Latin and Spanish-speaking world – and who has collaborated with Latin artists before this recent surge – why do you think these artists are experiencing that level of mainstream success? Is it a shifting demographics, or something like…audiences no longer being scared if someone sings in a different language?

Will.i.am: TRANSLATION is Black Eyed Peas first Latin album featuring blended lyrics in both Spanish and English and our first album in 8 years. We are beyond thrilled that music fans around the globe love it too and propelled the album and singles like “RITMO”, “Mamacita”, “Girl Like Me” “Vida Loca” and “Feel the Beat” up the charts.  Latin music has a huge audience and global reach, much bigger than the English-only market.

As an international group that has played in dozens of countries where English is not the primary language, we know that music that moves you has no borders.  When you want to get up and dance, even when the words are in a different language you don’t understand, the music just draws you in. Whether it’s a live show or a karaoke party, audiences love to sing along and learn the words while they are having fun. After 14 long months without our families and friends, we all need to add fun back in our lives, in whatever language we speak.

Taboo: I think these amazing artists in the Latin space bring that global sound, and the beauty of their culture shines along with the pride they have to represent their country. Their native language is also Spanish – so that being said –  the good vibes shine a global light to these artists which deserve all the love in mainstream pop charts as much as in the Latin charts.