Beaten and shackled by Louisiana state troopers, Black motorist Ronald Greene desperately tried to roll over in what may have been a struggle to breathe but was ordered to stay on his belly, according to body-camera video released by the Louisiana State Police.

A long-secret autopsy report, obtained by the Associated Press, cited Greene’s head injuries and the way he was restrained as factors in his 2019 death. It also noted he had high levels of cocaine and alcohol in his system as well as a broken breastbone and a torn aorta.

“I beat the ever-living f— out of him, choked him and everything else trying to get him under control,” Trooper Chris Hollingsworth can be heard telling a fellow officer in the newly released batch of video. “All of a sudden he just went limp. … I thought he was dead.”

“You all got that on bodycam?” the other officer asks over the phone, at which point Hollingsworth switches his camera off. 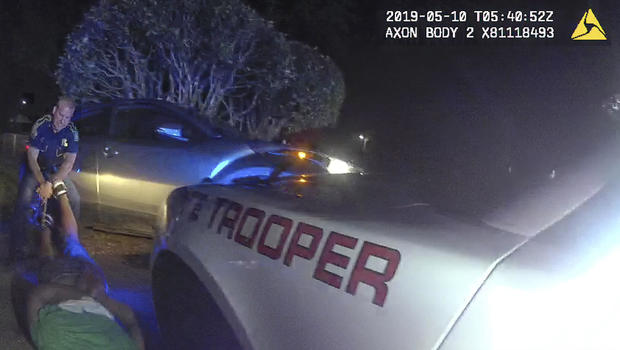 The footage and the autopsy report add to the growing wealth of details about Greene’s death, which has long been surrounded by allegations of a cover-up and is now the subject of a federal civil rights investigation. Louisiana State Police initially blamed his death on a car crash and made no mention of use of force by officers.

On Friday, after two years of refusing to explain Greene’s death and under mounting public pressure, the state police released all body camera footage related to Greene’s arrest, despite the ongoing investigations.

“While  the premature release of investigative  files  and video  evidence  can have  a  negative  effect on  the  criminal  justice  proceedings  of  any  investigation, LSP  remains  confident  in  the judicial  system and  fair review  of this  incident  and  continues  to offer our  full  cooperation,”  the state police said in a statement.

Gov. John Bel Edwards, in an about-face, said he “strongly supported” the release, calling the video “disturbing and difficult to watch.”

But the AP had already obtained those materials and this week published previously unreleased body-camera footage that showed troopers converging on Greene’s car outside Monroe, Louisiana, after a high-speed chase, repeatedly jolting the 49-year-old unarmed man with stun guns, putting him in a chokehold, punching him in the head and dragging him by his ankle shackles.

Use-of-force experts say the most dangerous and troubling parts of the arrest came after the struggle, when officers left the heavyset Greene facedown on the ground with his hands and feet restrained for more than nine minutes.

At one point in a new 30-minute video, Greene can be seen struggling to prop himself up on his side.

York then kneels on Greene’s back and tells him again, “You better lay on your f—— belly like I told you to! You understand?”

“The trooper’s wrong and what he did is excessive,” said Charles Key, a use-of-force expert and former Baltimore police lieutenant. “It’s a mistake because he can’t breathe. You see Greene drawing his legs up, and that may be because he can’t freaking breathe.”

Police are highly discouraged from leaving handcuffed suspects in a prone position, particularly when they aren’t resisting, because it can greatly hinder their breathing – a point made repeatedly at the trial this spring of the former Minneapolis officer convicted of murder in the death of George Floyd.

State Police Superintendent Col. Lamar Davis, who was not in charge at the time of Greene’s death, wouldn’t comment on the conduct of the troopers involved or whether he believed they should be charged. But he said he’d spoken with Greene’s family and offered his condolences: “I can feel their pain and feel it in my heart.”

“The officers who are subject to these investigations are afforded due process,” Davis said. “You have my commitment that we will follow the facts and hold our personnel accountable.”

While the autopsy on Greene listed his cause of death as “cocaine induced agitated delirium complicated by motor vehicle collision, physical struggle, inflicted head injury and restraint,” it did not specify the manner of death – a highly unusual move that did not make it clear whether Greene’s death could be deemed a homicide, an accident or undetermined.

Arkansas State Crime Lab pathologists Jennifer Forsyth and Frank J. Paretti, who conducted the autopsy in May 2019 for the Union Parish Coroner’s Office, found Greene had a “significant” level of cocaine in his system – 1,700 nanograms per milliliter – and a blood-alcohol content of 0.106, just above the 0.08 level that amounts to drunken driving in Louisiana.

They said it “cannot be stated with certainty” whether many of Greene’s injuries – including a fracture of the sternum, or breastbone, and a laceration of his aorta – were attributable to the car crash or the struggle with troopers.

“There were lacerations of the head inconsistent with motor vehicle collision injury,” they wrote. “These injuries are most consistent with multiple impact sites from a blunt object.”

In the latest video, Greene, his legs shackled and his hands cuffed behind his back, is prone on the ground, and two troopers can be seen hovering over him before he suddenly cries out. One of the officers tells him, “Yeah, yeah, that s– hurts, doesn’t it?”

It’s not clear from the video what the officer is describing, but several law enforcement officials who reviewed the footage indicated this might be the moment when one of them sprays Greene with pepper spray. A use-of-force document not previously made public shows pepper spray was used in the arrest.

“If they pepper-sprayed him at that point, that’s excessive,” Key said. “There has to be some threat. He’s handcuffed.”

Minutes after Greene’s outburst, he begins to moan and make gurgling noises as two troopers keep holding him down.

The new video, recorded on Lt. John Clary’s body camera (warning: link contains graphic, disturbing video), remained under wraps for months even within State Police but was recently turned over to the FBI as part of its investigation, according to three law enforcement officials. They were not authorized to discuss the investigation and spoke on the condition of anonymity.

At one point, after medical help arrives, a paramedic is heard saying, “He’s not getting enough air” and appears to put his blood oxygen level at 86, which Key described as critically low. Yet nobody appears to be giving Greene oxygen.

Louisiana officials had for two years rebuffed  repeated calls to release footage and details about what caused Greene’s death after the chase, which began over an unspecified traffic violation. Troopers initially told his family he died on impact after crashing into a tree. State Police later released a brief statement acknowledging only that Greene struggled with troopers and died on his way to the hospital.

That secrecy extended to the autopsy, which pathologists said was hindered by the State Police’s failure to provide even the most routine documents relating to Greene’s arrest, including police reports, collision details or emergency medical records.

Andrew Scott, a former Boca Raton, Florida, police chief who testifies as an expert use-of-force witness, said Greene’s case is an example of how “stonewalling is the Achilles’ heel of law enforcement.”

“The only reason I can even conjecture that this information would not be provided to the medical examiner’s office is because they didn’t want them to see it,” Scott said. “They intentionally thwarted the facts of this case to be truly revealed.”