Many businesses, including those in holiday hotspots that rely disproportionately on summer trade, are warning the “shadow lockdown” has put them in uncharted territory, with the economic effects of the Omicron wave seen by many as worse than previous COVID outbreaks. 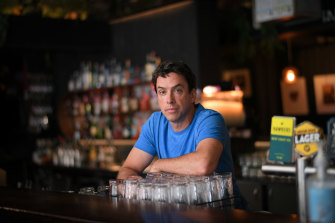 But because there is no official lockdown, federal and state support mechanisms have not been triggered. Asked on Wednesday about further financial support, Deputy Premier James Merlino said he had “no further announcements”.

National cabinet will discuss on Thursday proposals believed to include lifting restrictions on working hours for temporary migrants, and the relaxation of isolation requirements for workers in critical industries – a measure similar to rules that took effect in Victoria on Wednesday night.

After facing restrictions and lockdowns for much of the past two years, Melbourne CBD bar owner Luke Delaney has just experienced what he calls his most difficult week yet.

“It is a bit like we’ve been in a boxing match with COVID and the ref should have basically just called it by now,” he said. “We are in the ring, only just keeping our feet.”

‘We had lots of people saying, “Hold on, hold on.” But what are we holding on for?’

Mr Delaney, co-owner of music venues Fiftyfive and Workshop, said a large proportion of his staff had either succumbed to the coronavirus or been forced to isolate as close contacts while facing lengthy testing delays.

It has made it difficult to stay open, but the situation has been compounded by density limits, a ban on dance floors and an “absolute lack of demand”, particularly in the city.

“We had lots of people saying, ‘Hold on, hold on.’ But what are we holding on for? I don’t know how many more negative forces can be put on a business.”

Things are as bad in Victoria’s holiday hotspots. Inverloch Esplanade Hotel managing director Dylan Clark said many restaurants and cafes were shutting their doors and tourists were packing up and heading home in droves.

“On Monday there was one place you could order food from out of about a dozen,” he said.

Mr Clark said in a normal year his take over the Christmas and Australia Day periods made up between 20 and 25 per cent of his annual turnover “and we’ve already pretty much missed a whole week of that.

“This is literally affecting everyone and hitting the coastal areas really hard at the moment. In the week leading up to our [kitchen] closure, we were doing about 800 meals a day. We had to slowly reduce that back before completely shutting.”

Keziah Lowden, manager of Lemon Tree cafe in Shepparton, said: “I think everyone is struggling. It was busy … in late December and early January because a lot of the other hospitality venues had closed.” But since then, business had dropped off significantly and “it’s been very quiet”. 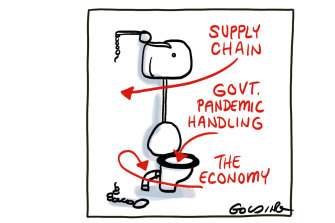 “There is a likelihood that businesses, particularly in areas like retail and hospitality, could find themselves in a real pickle, and that pickle is they are not getting supported by the government and also not getting the trade they need.”

The state government remains optimistic the Omicron wave will begin to dissipate in late January or early February, meaning the pain would be relatively short-lived. Mr Merlino said the government was trying to strike the right balance between protecting the public and allowing businesses to keep operating.

“I’ve got no announcements today, so I really can’t expand any further,” he said on Wednesday. “We’ve put significant supports in place for businesses over the last two years of the pandemic, and what we’ve done is, again, strike the right balance between what are the public health settings to keep Victorians safe and what are the settings to make sure that we can keep the economy ticking along.”

Chrissie Maus, general manager of Chapel Street Precinct, which represents 2200 businesses, said with more than one-third of staff working in the Chapel Street area hit with the virus, “we need our government to come forward with solutions to rapidly assist. We are in the eye of a perfect storm: deferred payroll taxes and wage increases are kicking in now. Chapel Street Precinct is at a crisis point and needs government cash support.”

“I know many state governments and certainly the federal government has told us time and time again of the billions and billions of dollars that have been spent in the past,” he told ABC Radio, “but we continue to say, ‘It’s today, it doesn’t matter what we’ve done in the past; we need help today and in the future.’ ”

Victorian Chamber of Commerce and Industry acting chief executive Scott Veenker said the federal and state governments should be offering free rapid antigen tests to small and medium businesses, and increasing the list of essential workforces that are not subject to isolation requirements if they test negative.

Barrie Elvish, chief executive of AUSActive, said the health and fitness industry’s problems had been compounded because many people employed in the industry had left due to the uncertainty of lockdowns.

“We have lost over half of our workforce,” he said. “So replenishing that is going to be a short-term problem as we wait for new personal trainers that come through the VET sector or the university sector.”

Recent data released by ANZ showed consumer spending has slumped to its lowest levels since the Delta lockdowns. It found spending in Melbourne during the week to January 5 was similar to lockdown conditions.