Home » Lifestyle » Can you REALLY massage away your midlife middle?

Can you REALLY massage away your midlife middle?

Can you REALLY massage away your midlife middle? asks a hopeful GERALDINE BEDELL, as she meets the woman celebs ring to banish bloating

She’s the woman who celebrities have on speed dial before a red-carpet event, known for her magic hands and said to be the secret behind many a toned A-list thigh.

One of the latter, Emma Louise Connolly, says: ‘I feel like I’ve dropped a dress size after each session.’ While Lottie Moss (Kate’s half-sister) posted on social media that Flavia is ‘honestly the best thing, especially after a heavy weekend’.

Now, Brazilian-born Flavia is about to wield her magic hands on me. 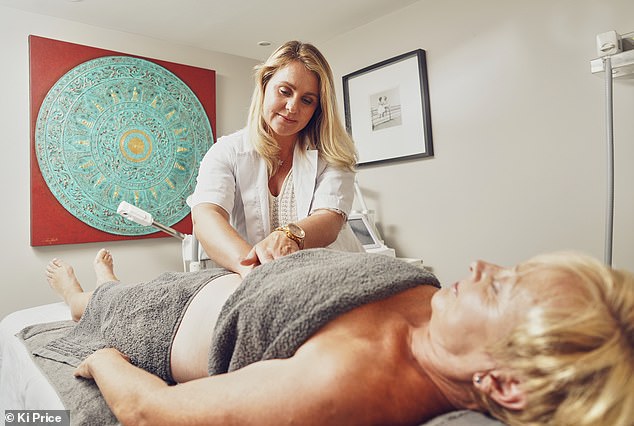 She has brought Brazilian techniques to Britain and enhanced them with her own ideas, developed during her training as a physiotherapist.

Since she arrived in London in 2016, she has built up a starry reputation through word of mouth.

Lymphatic drainage works by massaging the body’s lymphatic system — the body’s natural drainage, which collect excess fluid and waste products from the tissues and helps to flush them out.

In Brazil, lymphatic drainage is much more commonplace. It’s widely used to reduce puffiness and bloating. It’s often prescribed after plastic surgery, and to deal with cellulite, menopause, PMS and poor circulation.

Many women take courses to aid weight loss; others book a session to help them look and feel better. 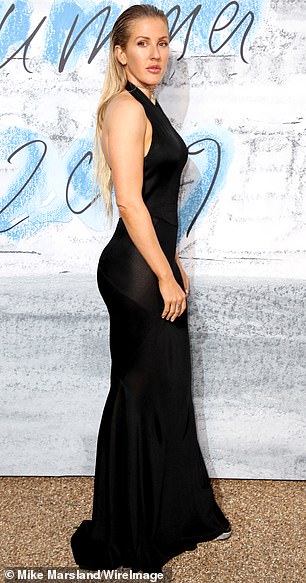 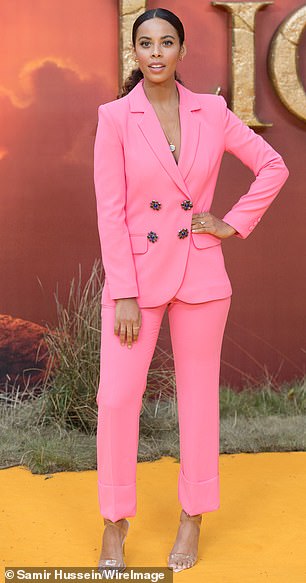 Flavia tells me Brazilian models first made the treatment popular in America, then brought it to Europe.

In the UK, lymphatic drainage has tended to be based on the method invented by a Danish doctor, Emil Vodder, in the 1930s, which is more gentle and still used as a way of treating lymphoedema (swelling of parts of the body, often limbs) which occurs in some cancer patients.

Flavia’s focus on the digestive system and her use of physiotherapeutic methods — greater pressure, differing speeds — has ensured that lymphatic drainage is also becoming a favourite therapy for A-listers before photoshoots, weddings and bikini shoots on Instagram.

I, too, want a flat stomach, smoother skin and to feel lighter and more relaxed, so I am keen to try out this secret therapy beloved of women in the know.

Unfortunately, on the day of my appointment, my digestion is having one of its periodic off-days. I am horribly bloated. So bloated I’m worried Flavia won’t even be able to find my lymph nodes under all the puffiness and swelling.

To make matters worse, I absolutely hate having my stomach massaged. I love massage generally, but can often jump a foot in the air when someone comes near my middle. 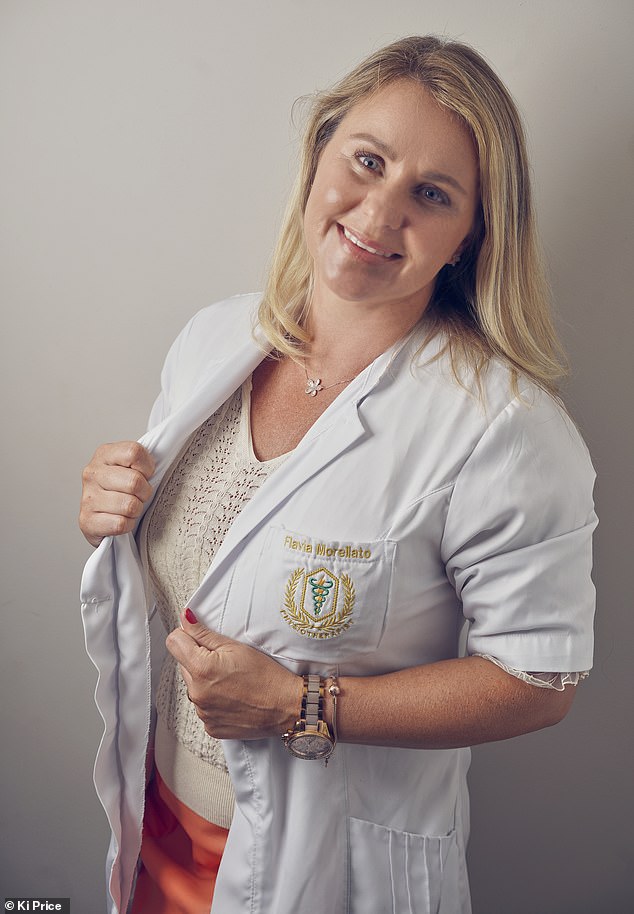 Flavia (pictured) who is married and the mother of an 11-year-old son, studied physiotherapy for five years in Brazil, where lymphatic drainage is taught as part of the degree

Unfortunately, there’s no choice here: Flavia’s lymphatic drainage method is all about the gut.

At her current South London base, I jump on the massage table, naked apart from my knickers. Flavia, 37, married, and the mother of an 11-year-old son, covers me with a couple of towels and starts working on my abdomen.

Fortunately, she is a reassuring presence: warm, lively and bursting with infectious enthusiasm. She makes me feel that I’m (literally) in good hands. She ‘fell in love with lymphatic drainage’, she tells me, after gaining a lot of weight during pregnancy. Back home in Brazil, following the birth of her son in the UK, her mother recommended lymphatic drainage to help her get back in shape. She lost eight kilos through a diet regime and regular sessions.

‘I thought this was something incredible,’ she says. ‘I knew I wanted to be involved with it.’

So she studied physiotherapy for five years in Brazil, where lymphatic drainage is taught as part of a physiotherapy degree. She came back to the UK intending to do a physiotherapy Masters degree. But she met Dr Mica Engel, the woman behind the Cosmetica London clinic, who started to promote Flavia to her clients, and to recommend her services after cosmetic treatments. 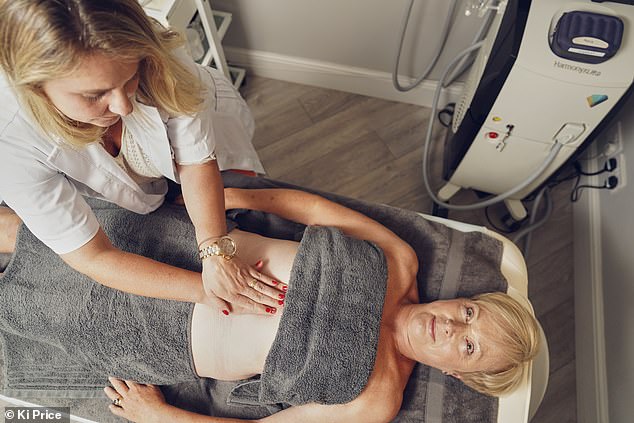 ‘You have quite an inflamed gut,’ Flavia notes with understatement, as she starts pressing the area beneath my breastbone. I explain about not really liking having this part of me massaged.

‘People often don’t,’ she says. ‘I understand. All your major organs are here, so it’s an area you instinctively want to protect.’

Flavia uses a massage cream she imports from Brazil that contains algae and grape seeds to boost circulation. There is more pressure than I’ve ever experienced in a tummy massage. Yet, oddly, it’s soothing and not at all uncomfortable. I sense my stomach tension beginning to evaporate.

She explains that she is moving lymph (a colourless liquid) towards the heart. From here, the blood carries fluid and waste products to the kidneys to be flushed out. Lymphatic drainage is based on the idea that the process can be speeded up and made more efficient by massaging.

Sometimes, when hormones are erratic, or after injury or illness, or simply because you’ve overdone it, excess fluid can build up. Lymphatic drainage expels that fluid along with the waste products — ‘from cosmetics, preservatives, pesticides, pollution’, Flavia tells me — plus the metabolic waste that is carried by the lymph. 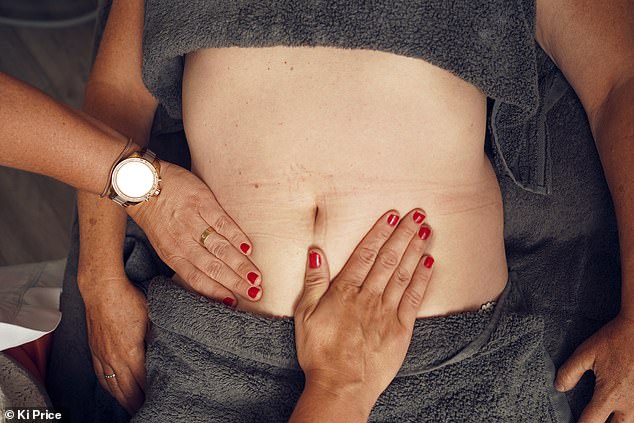 The therapist has to work with the body’s pathways rather than against them. ‘It has to be done properly,’ Flavia says, ‘otherwise it can have the opposite effect.’

Mechanical forms of lymphatic drainage exist, but she doesn’t trust them. ‘Feeling the body and responding to it is important.’

After only five minutes, she instructs me to touch my stomach. It feels much softer. All that hard, angry swelling has gone.

Once she’s finished on my gut she moves onto my legs. She can locate where there is fluid build-up — behind a stiff knee, around an injured ankle. The massage eases it deliciously.

When she’s finished on my right leg, she tells me to lift it. The leg floats up effortlessly. ‘Now try the other one.’ By comparison it feels like it weighs a ton.

Flavia instructs me to take deep breaths while she presses hard into the lymph nodes (in my armpits and my groin, for example). Weirdly, this feels quite soothing. 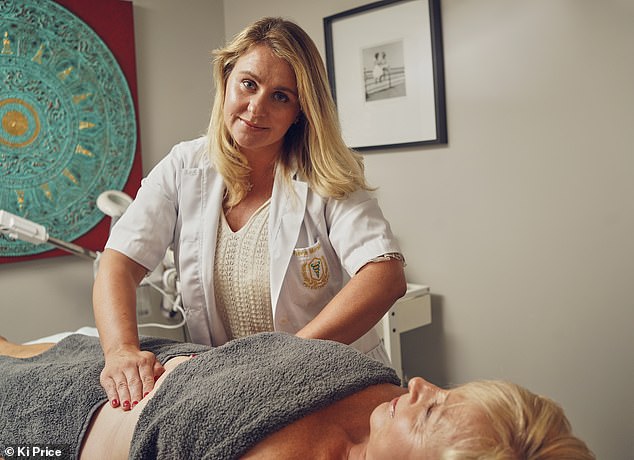 Flavia (pictured) explained that the results of the therapy could last for up to ten days if carbohydrates, refined sugars and alcohol are avoided

Lymphatic drainage is particularly valuable for people whose systems are upset, including menopausal women, people recovering from surgery and those who want to get their body healthy again after too much hard living.

It’s also popular with pregnant women — less pummelling of the gut for them obviously, but great for swollen legs and feet.

I feel a sense of lightness when I get off the table. My stomach has stopped creaking. The swelling is gone. It looks soft and, yes, slimmer. I can see how people might get addicted to this; might want to come before every big night out. And after, come to that.

Flavia instructs me to drink plenty of water afterwards.

So how long will the effects last? Flavia says if I also avoid carbohydrates, refined sugars and alcohol, I may well feel the effects for up to ten days.

Unfortunately, when I get home, my husband has made pasta. It’s late. I’m starving. I eat it. I sleep very well. When I look in the mirror the next morning I am convinced my stomach is still flatter. Especially if I suck it in.