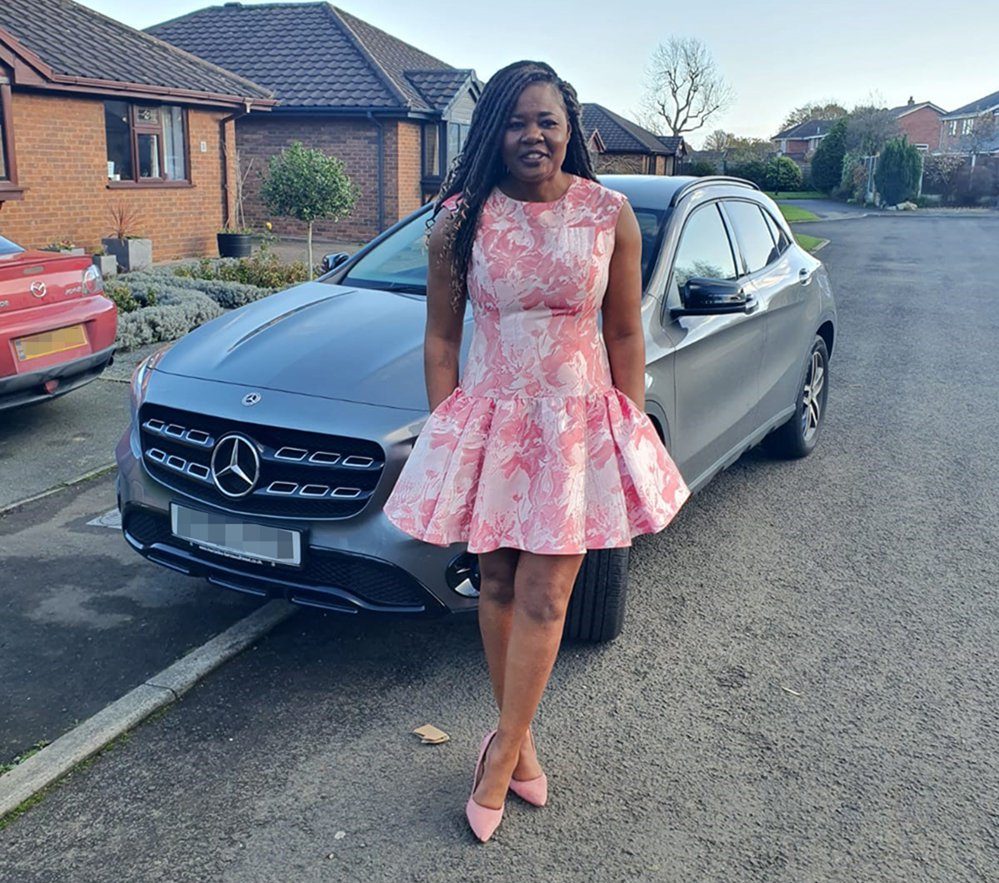 A mum who used a ‘lipstick and heels’ philosophy to get through breast cancer treatment has told how her eyelash business – specifically for people going through chemotherapy – has taken off.

Cody Gapare, 43, was diagnosed with stage two breast cancer in August 2014, right before a university interview.

Single Cody, of Northwich, Cheshire – mum to office worker Panashe, 21, and Takunda, 13 – said: ‘I found out I had cancer at 3pm and went for my university interview at 6pm.

‘I’d convinced myself it wouldn’t be cancer. I was only 36, I’d never drunk or smoked in my life and was very active. I was so sure it couldn’t be cancer that I didn’t see any point in cancelling my interview.’

Desperate not to discuss her mortality, Cody waited for treatment until she’d taken her kids to Legoland – something she’d always promised them she’d do. It was then that she had a lumpectomy.

The grape-sized lump she’d initially found in the shower was removed in October 2015, before chemo and radiotherapy started the following year.

This was also when Cody had the idea for her eyelash business.

She says: ‘I started looking for a way to lift my mood and came up with a philosophy I called ‘lipstick and heels’.

‘Basically, it meant getting up every single morning, having a shower, putting make-up on, perfume, a nice dress and heels – nothing more than that.”

Cody, who has now been cancer-free since 2015, wanted to feel as normal – and as far away from being a cancer patient – as possible.

She said: ‘I could put on my make up, I could draw on my eyebrows, I could wear my wigs to hide the hair loss, because of treatment.’

But she hit a brick wall when chemotherapy made her eyelashes fall out.

She said: ‘I discovered that when you use normal false lashes, they need a line of real lashes to rest on. They don’t look natural otherwise. It’s like they need a ridge to fix onto.

‘It was so difficult to make them look nice and it was obvious they were false.’

In an effort to rectify the issue, Cody tried modifying lashes to wear herself, and went on forums to see if anyone else was experiencing similar issues – which they were.

A friend helped her to make a rough prototype, which was sturdier than normal false lashes and had a built in lined ridge. When this friend said she’d buy the lashes if they were in a ship, they knew they were onto a winner.

‘I didn’t even wear make-up before I started chemotherapy. So, I didn’t know the basics and felt nervous about going to people and asking them.’

Thankfully she found a manufacturer in Southend on Sea, Essex, and her official prototype got her a partnership with well-known brand Eylure.

The C-lash, which stands for the positive C-words connected with cancer, such as ‘champion’ and ‘conviction’ which are printed on the packaging, are in Boots stores across the UK, as well as America, Australia, Sweden, and Norway.

Now, despite Covid, the business is going from strength to strength, generating more than £500,000 gross turnover in 2020.

But Cody says the most satisfying part of her business is the feedback she receives from fellow cancer survivors.

She said: ‘Creating a new product is one thing, but what really matters is how it’s received by the people you made it for.

‘For me,  the positive feedback is the thing that makes this whole journey worthwhile.’

The company has even branched into unisex lashes with a more natural feel, as customers suggested a line that men who’ve lost their hair during chemo can wear too.

Despite all the negatives that led to her launching her product, Cody’s 13-year-old son recently gave her another reason to celebrate.

She said: ‘He’s keeping a scrapbook of the great reviews I’ve had.

‘He’s at that cool age when kids don’t want too much to do with their parents, so when I found out that he was this proud of me, my heart melted. It was quite a moment.

‘Both my sons are proud of me and, looking back, it really was my “lipstick and heels” approach to cancer that made me.’