Lord mayor Sally Capp is firming as the clear front runner in the race to lead Melbourne Town Hall, after the Victorian government confirmed it would allow the October election to go ahead. 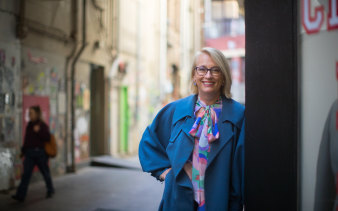 Neither councillor would confirm the joint ticket on Thursday, with Cr Reece saying only that he was focused on helping Melbourne recover from the COVID-19 pandemic.

With nominations opening in four weeks, Cr Capp’s deputy, Arron Wood, is firming up to challenge her for the leadership.

While Cr Wood said he was not ready to announce his plans, he did say he was "strongly considering getting a team together"

Councillors Capp and Reece teaming up would mean Labor voters have at least three pairings to choose from, with the party endorsing Phil Reed for lord mayor and Jennifer Yang in the running as an unofficial Labor candidate for lord mayor.

Ms Yang, who narrowly missed out in the 2018 lord mayoral byelection on preferences, is understood to be backed by a group of unions affiliated with the industrial left of the ALP, including the Rail, Tram and Bus Union (RTBU).

The byelection was sparked by the resignation in February 2018 of lord mayor Robert Doyle, days after he was handed the key findings of a council investigation into sexual harassment claims against him by multiple women. He has denied all allegations against him. A two-year police investigation into the allegations ended with no charges being laid.

If Cr Wood decides to put his hat in the ring for lord mayor, he could have his former Team Doyle members beside him.

Councillors Susan Riley and Beverly Pinder both say they may retire, but would consider running on Cr Wood’s ticket if he joined the race.

Cr Riley, who served as deputy lord mayor under successive lord mayors John So and Robert Doyle, said she was torn over whether to run but was "very loyal to Arron".

"He hasn't made that decision yet, but if that was the case, there is a good possibility," Cr Riley said.

Cr Pinder, a public relations executive, was more resolved that she would not recontest, citing the stress of working from home and a fractious relationship with Cr Capp.

"Do I want to serve under this Lord Mayor? No, probably not," she said.

"She is not a leader. You consult with your team. You don't go consulting with rich people in Toorak."

However, the 1978 Miss Universe Australia left the door open if someone, including Cr Wood, made her a good offer and she felt their values aligned.

"What we don't want is an amalgam of Labor Party, Greens Party, Sally Capp in there," she said.

"This is local government for the people and that is what we need."

Cr Philip Le Liu, the only Liberal member on the council, confirmed he was recontesting on an unofficial Liberal ticket as a councillor.

The Liberal Party does not formally endorse council election candidates, but provides support through a newly formed internal local government committee, of which Cr Le Liu is part.

The Greens, holding both the state and federal seats of Melbourne, are expected to announce their candidate for lord mayor in coming weeks.

Cr Rohan Leppert has confirmed he will renominate for council but Cr Cathy Oke will not run again, having sat on the council for 12 years.

Other early contenders for lord mayor include pollster Gary Morgan, who has contested the position four times previously. He has not come close to getting elected but candidates on his "team" have been elected as councillors each time.

Mr Morgan is teaming up with Queen Victoria Market activist Mary-Lou Howie as his deputy, with long-term councillor Jackie Watts as their lead councillor candidate.

Former independent councillor Stephen Mayne is also expected to run, while ex-politician Phil Cleary is deciding whether to nominate.

Cr Watts has listed two motions for next Tuesday's council meeting to increase transparency in the election.

She will call on candidates to decline donations from property developers and the gambling and tobacco industries. Cr Watts also wants candidates to disclose all donations and gifts within five business days, with current legislation only requiring it be disclosed 40 days after the election.

In a separate motion, Cr Watts will also ask candidates to disclose their positions and any beneficial interest they have in a company or body.

Both motions are seconded by Cr Wood.

Cr Nicolas Frances Gilley confirmed he was not standing but said he was in conversations with a number of potential Aboriginal candidates he hoped to support to run.

"I'm an old white man, and that's the last thing you need these days," he said.

The most important news, analysis and insights delivered to your inbox at the start and end of each day. Sign up to The Sydney Morning Herald’s newsletter here, to The Age’s newsletter here and Brisbane Times‘ here.