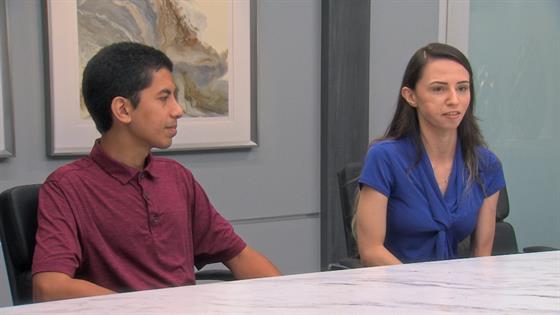 It takes a lot to horrify doctors Paul Nassif and Terry Dubrow.

Yet, in this clip from tonight’s all-new Botched, the famed plastic surgeons are left practically speechless after meeting with a car crash survivor. During a consultation, new patient Brontee opens up about the horrible emergency room care she received after being hit by a drunk driver.

“Three years ago, we were involved in a car accident, a drunk driver had hit us,” Brontee starts off.

As Brontee’s boyfriend Axel recalls, the driver was heavily intoxicated and tested positive for cocaine. So, it’s safe to say that the person shouldn’t have been driving.

“The windows smashed and my face took the impact of the glass,” Brontee continues.

“So, the glass sliced right through your cheek?” Dr. Nassif inquires.

After being taken to the emergency room by paramedics, Brontee recalls being left bleeding with glass in her face for hours.

“They didn’t have a surgeon on duty and they had to wait until the surgeon came in at about 7 a.m.,” she adds.

According to Brontee, none of the E.R. physicians attempted to take the glass out of her face. Apparently, they just “wrapped it up” and tried to “control the bleeding.”

Since Brontee arrived at the hospital around midnight, the doctors are horrified by the fact that she was “bleeding all night long.”

“Brontee had many problems relating to waiting all night for a doctor to come in. One, she was bleeding all night. That could’ve stopped if the doctor closed it,” Dr. Nassif tells the Botched camera. “Two, the risk of infection goes up. Three, there’s a possibility that it could increase scar formation if you wait too long.”

Unsurprisingly, Dr. Nassif has some blunt words for Brontee’s previous medical team: “The doctor should’ve gotten his ass in there a lot sooner.”

Watch the Botched consultation in the clip above.

Watch a brand new episode of Botched Monday at 9 p.m., only on E!