The very HANGRY caterpillar: Monarch butterfly caterpillars head-butt rivals out of the way when food is scarce, study finds

A species of caterpillar gets ‘hangry’ – angry due to hunger – when food is scarce, a new study reveals.

Monarch butterfly caterpillars (danaus plexippus) become aggressive fighters in their quest to eat milkweed – a herbaceous plant that’s toxic to most animals and their favourite food.

US researchers found that monarch caterpillars with less access to milkweed were more likely to lunge at others to knock them aside.

Caterpillars were most aggressive during the final all-important stages before metamorphosis – the transformation into an exquisite butterfly.

A lack of nutrition during these larval stages can delay development as well as reduce body size, reproductive performance and lifespan after metamorphosis. 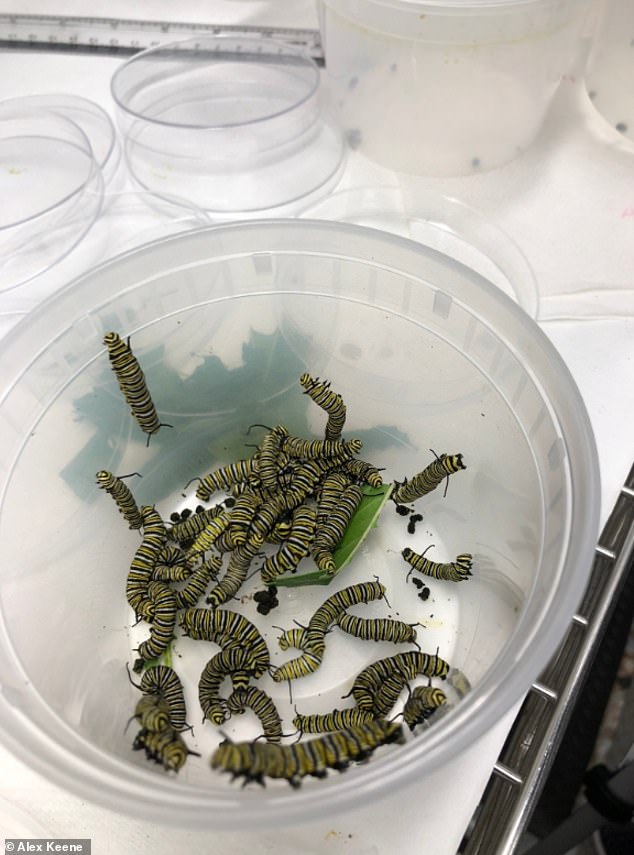 When food is scarce, monarch butterfly caterpillars go from docile to domineering. Pictured, the species in a bucket in a lab scrapping for a scarce form of their favourite food – milkweed

‘I decided to investigate monarch caterpillars because I was intrigued by their combative behaviour, which I observed first-hand in my own garden,’ said study author Alex Keene at Florida Atlantic University in the US.

‘They are large and easily recognisable compared to many other insects.

‘These are charismatic animals that everyone loves, and there’s a growing appreciation for their potential to tell us about how the brain controls behaviour.’

The species, which is a native of the US, is one of the largest butterflies in the British Isles with a wingspan somewhere between 3.7 to 3.9 inches (95-100mm).

‘These are charismatic animals that everyone loves, and there’s a growing appreciation for their potential to tell us about how the brain controls behaviour,’ said Keene.

In many locations, milkweed is only available for part of the year, placing a significant constraint on monarch development. 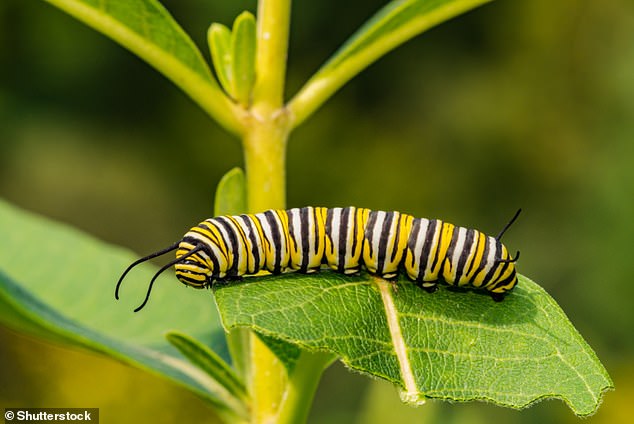 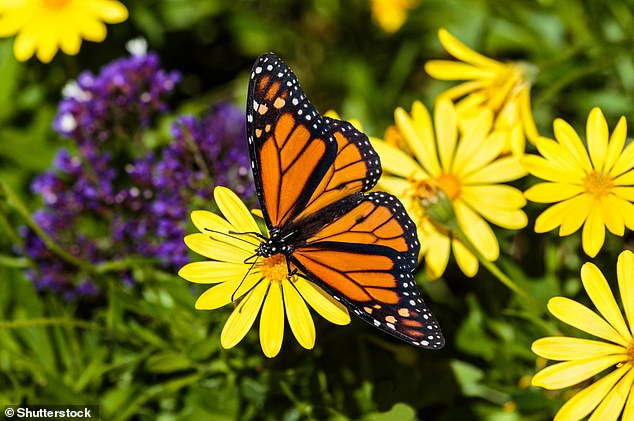 And as a butterfly. It’s known for its ability to migrate across large distances. The migrations in north America are one of the greatest natural phenomena in the world

At their largest and hungriest phase, a single caterpillar may eat an entire milkweed leaf in under five minutes.

‘If you compare that to a fruit fly where there are lot of larvae on one piece of rotting fruit, there is less competition there,’ said Keene.

‘But each of these caterpillars will at some point in their developmental cycle encounter resource limitation.’

For their study, Keene and his team built an open milkweed garden behind their lab in Boca Raton in Florida to entice caterpillars.

‘We found that almost every nursery sells their milkweed with pesticides so, we ended up having to grow our own.’

Back in the lab, the researchers placed the caterpillars into groups with different amounts of milkweed and observed their levels of aggression.

The number of lunges toward another caterpillar was significantly increased under conditions of low food availability, they found, suggesting a link between ‘resource defence’ and aggression. 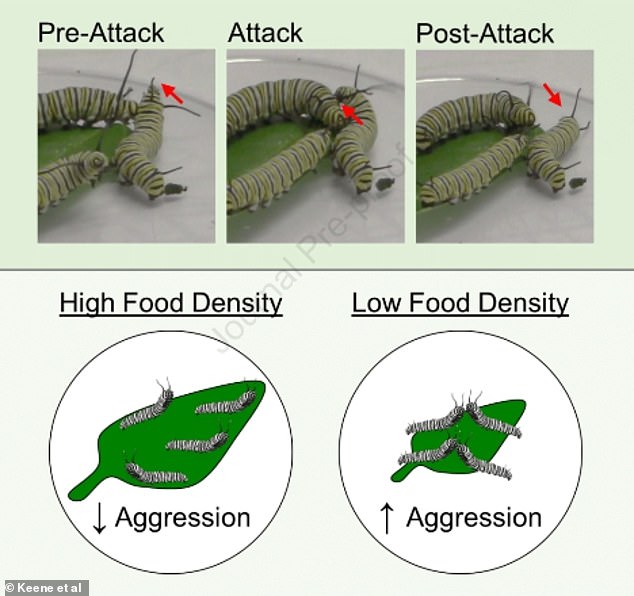 Researchers hope to learn more about what drives this response in their brains, which is important for learning more about how these responses work outside the lab.

‘One of the fundamental problems with work like this is that we’re testing animals in a very derived setting and that’s not what brains evolved to do,’ Keene said.

‘So now that we have this invertebrate model in a relatively controlled setting but doing an ecologically relevant behaviour, that becomes important in terms of looking at the mechanism and function of this behaviour in more complex organisms.’

The study has been published in iScience.

The monarch butterfly (danaus plexippus) is a native of the US but is one of the largest butterflies seen in the British Isles.

It is well known for its ability to travel great distances.

Every autumn, millions of monarch butterflies migrate 3,000 miles from their breeding grounds in northeastern North America.

The first record of this species in the British Isles, by a schoolboy, was on September 6, 1876 in Neath in south Wales.

Although initial records were thought to be the result of accidental transportation by ship, subsequent years, such as 1933 when 40 individuals were caught, meant that this theory was dismissed and that the most-likely cause was a genuine immigration.

This butterfly is also very occasionally recorded from the British Isles, making it our largest and rarest migrant butterfly.

The monarch caterpillars feed solely on Milkweed plants – which is toxic to most animals.

Monarchs have evolved to tolerate it and use it to their advantage, storing the toxins in their bodies and making themselves poisonous to predators.

The total number of records for the British Isles is less than 500.

In August 1981, a Monarch that had escaped from a nearby butterfly farm was seen to lay on Milkweeds in Kew Gardens.

Some of the eggs were collected and reared indoors, where the first adult emerged just one month after the egg had been laid.