Chef shares recipe to make your own McDonald's cheeseburger at home

Make McDonald’s at HOME: Celebrity chef behind the famous Mr Wong restaurant reveals his eight-ingredient cheeseburger recipe (and the secret to the perfect mince blend)

A celebrity chef has shared his easy-to-follow recipe for making McDonald’s-inspired cheeseburgers while at home in isolation.

Dan Hong, the executive chef behind Sydney’s famous Mr Wong and Ms.G’s restaurants, revealed his secret to the perfect cheeseburger using eight ingredients – and why you should never season your patties with herbs or breadcrumbs.

‘I’m going to make a very quick meal for the family – cheeseburgers, inspired by one of my favourite burgers at McDonald’s,’ Hong said on his Instagram. 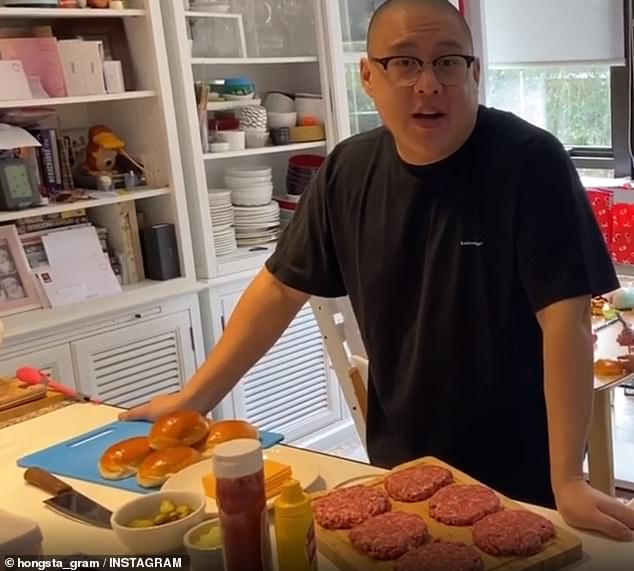 Ingredients to make your own McDonald’s cheeseburger at home

‘The most important thing about your burger patties is using the best quality beef mince. So that means do not buy your beef mince from a supermarket, buy it from a butcher or a premium meat supplier,’ Hong said.

‘My perfect mixture is chuck and brisket 50/50. If you get good quality beef mince, the beef is going to be delicious. I like grain-fed, its got more flavour in terms of that fat that comes out.’

The 37-year-old chef said the biggest mistake when making hamburger patties is seasoning the meat.

‘I haven’t seasoned them at all. The biggest no-nos of doing hamburger patties is putting seasoning inside, no dried herbs, no bread crumbs, no ketchup, none of that because that’s not a hamburger. You know what that is? That’s a rissole,’ Hong said.

‘We’re not making rissole sandwiches, we’re making burgers. This is 100 per cent beef, no added seasoning. We’re going to season it with salt just before we cook it.’

For the buns, he suggested buying a soft type of bread.

‘I got these buns from Bread Top, they’re really soft so that’s the type of buns I like to use. I don’t like brioche or a crusty damper bun… Needs to be soft,’ he said. 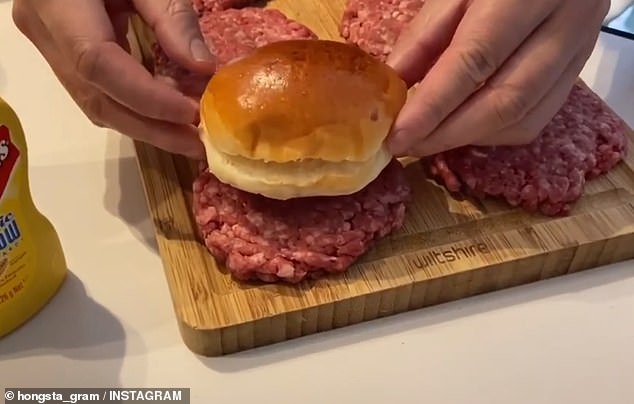 When preparing the beef patties, Hong said you must shape them bigger than the buns because they shrink in the pan when cooking 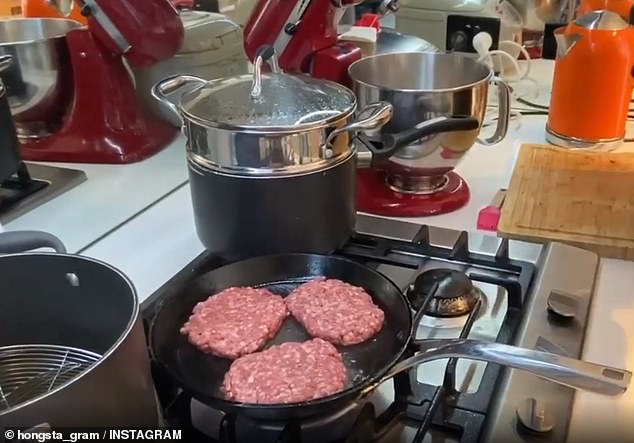 Shape the beef patties bigger than the buns

Season the beef patties with salt before you cook them

The processed cheese and mustard sauce must be American

Press the patties with a spatula as soon as it hits the frying pan because if you do it later during the cook, all the juices will run out

When preparing the beef patties, Hong said you must shape them bigger than the buns.

‘Make sure your patties are bigger than your buns in terms of diameter. The reason is when we cook the patty, it’s going to shrink and when the patty shrinks, we don’t want it to be smaller than the bun,’ he explained.

‘There’s nothing worse than a terrible meat to bun ratio. So the whole process behind this is when it shrinks, the meat is still going to stick out a little bit outside the bun, and that’s what’s going to make the perfect burger.’

Hong said if you want to me a ‘proper’ American style cheeseburger, you need to use American processed cheese while the gherkins must be dill pickles.

He suggested preparing a bowl of raw finely chopped white onion so you can use when assembling the cheeseburger.

For the condiments, Hong said you should only use Heinz ketchup and American mustard. 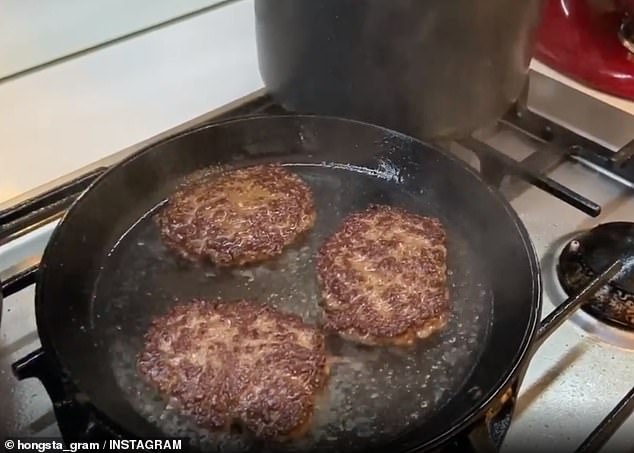 Hong flips the patties over after two minutes, showing a ‘crispy layer of caramelisation’ 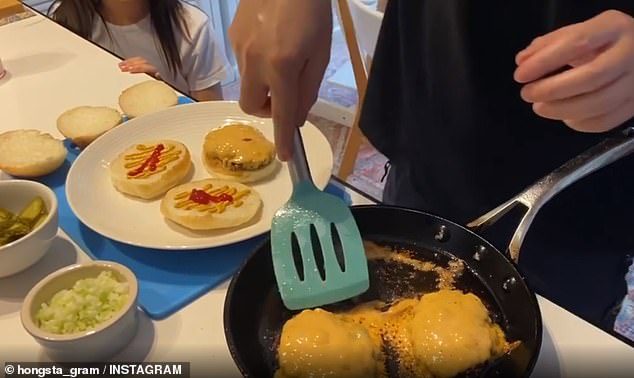 During the cooking process, he added the American cheese to the patties so it melts. When assembling, he put the mustard on in a zig-zag line, before putting ketchup in the centre 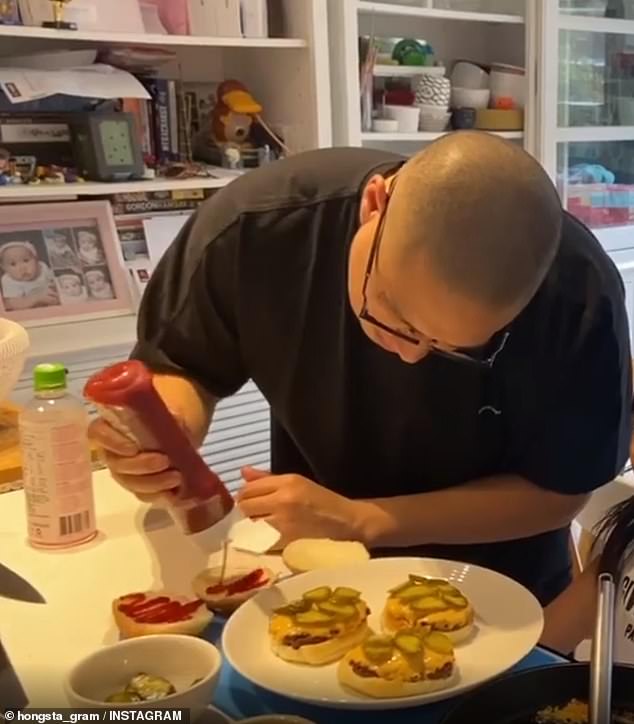 After placing the pickles on the cheese, he adds tomato ketchup and raw diced onion to the top of the bun before assembling the rest of his cheesebuger

To begin cooking, he seasons the patties with salt before adding them to a frying pan over high heat – and then he quickly presses them with a spatula.

‘I like to press the patties at the beginning so we get that maximum caramelisation. If you press it a bit later on, you’re pressing all the juices out because it’s already sealed down the bottom,’ Hong explained.

He said you need to cook the patties on one side for at least two minutes or until the edges start to change into a grey colour.

Hong then turns the heat down to medium, before he flips the patties over, showing a ‘crispy layer of caramelisation’.

He then adds his buns to a steamer for 20 to 30 seconds, then he adds the cheese directly on the patties as it continues to cook over the heat. 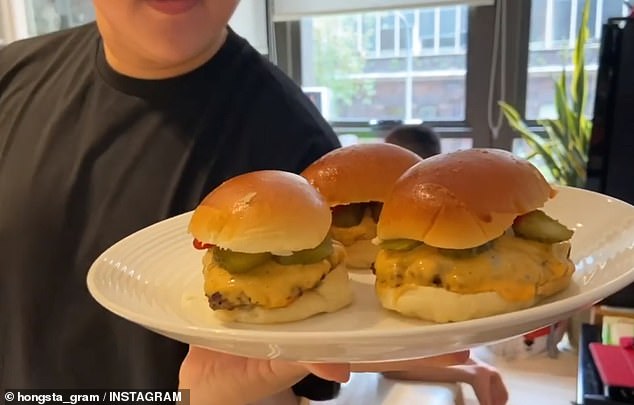 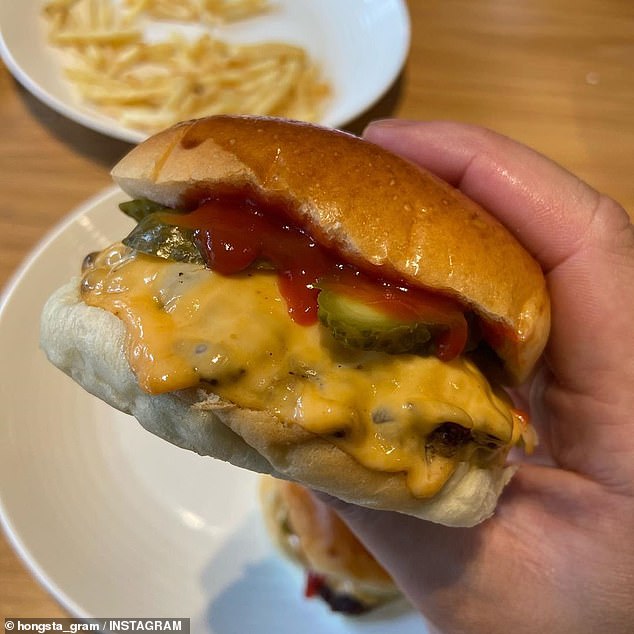 ‘Even though the burger is super simple, those elements need to be perfect, the meat and bun needs to be right, you’ve got to use the right condiments and the right pickles,’ Hong said

Next, he turns the heat down to low, before adding a second frying pan over the top to create a ‘steam’ so the cheese can melt over the patties.

In less than one minute, Hong took the beef patties and cheese off the stove before he begins assembling his cheeseburger.

He adds the mustard in a zig-zag line to the bottom buns, then squirts a bit of ketchup to the centre, followed by the patties and sliced pickles.

Finally, he puts ketchup all over the top bun, adds the diced onion and then he places it on top of the pickles to serve.

‘Even though the burger is super simple, it’s a classic cheeseburger, those elements need to be perfect, the meat and bun needs to be right, you’ve got to use the right condiments and the right pickles,’ Hong said.

‘Absolutely delicious, try this at home.’