The “Cravings” cookbook author recently recounted a “horrifying” incident that took place in Virginia over a decade ago. Teigen said she and husband John Legend were stalked by two white, “neighborhood-watch-type” men who harassed and followed them to their destination.

“We were in a nicer neighborhood at night, driving slowly, looking for John’s godmother’s home. These two guys were in a pickup truck slowly tailing us, flashing their lights and trying to speak to us,” Teigen told Marie Claire in an interview published Tuesday. “When we pulled over, they were like, ‘What are you guys looking for?’ and we gave them the address.”

“They literally said, ‘Get your asses out of here!’ and proceeded to follow us all the way into her driveway. They got out of the car and stared at us as we knocked on the door and went inside. It was a terrible, scary experience.”

“That was my first taste of seeing what happens to Black men every day,” Teigen told the magazine, tearing up. “It was horrifying and could have gone wrong so quickly. I was sobbing afterward for hours, and I noticed John wasn’t emotional about it. Seeing that he wasn’t very thrown by it was really upsetting because he obviously had experienced it before.”

The model and “Lip Sync Battle” co-host said that people are “very confident” and “open about their racism” today because of President Donald Trump’s support.

“It’s become such a hurtful, weird presidency for so many Americans, and I’m going to fight to get this person out of office because I can’t live another four years with this kind of hatred boiling through America,” she added.

Teigen also spoke to Marie Claire about raising children amid the current state of the world. She and Legend have two kids ― Luna, 4, and Miles, 2 ― and recently announced that they are expecting a third child. 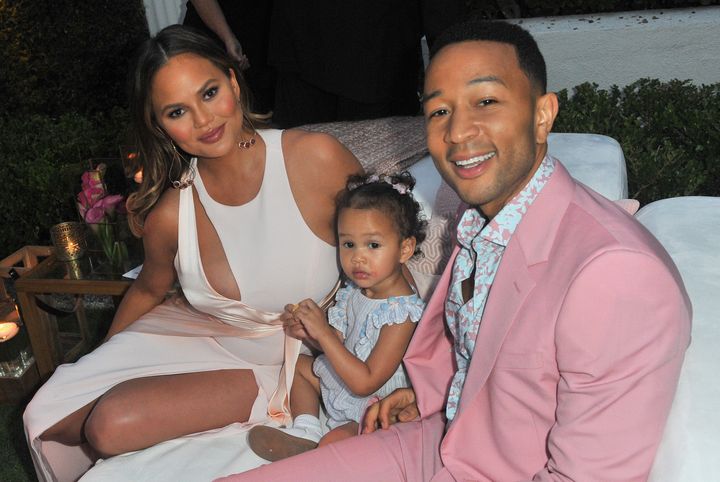 “When it comes to them being treated differently because of the color of their skin, I’m going to look to John for a lot of help with that because while they are Asian and white too, their skin color is Black,” she said.

“We just try to talk to them like little adults, saying it in words they’ll understand, making it known that it’s very serious, and letting them ask as many questions as they need.”

Both Legend and Teigen are politically active and have publicly supported the Democratic presidential nominee, Joe Biden, and his vice presidential pick, Kamala Harris. Harris was one of Teigen’s favored presidential candidates last year.

The model tweeted her support for Harris in August after the California senator became Biden’s running mate and even suggested a creative way to celebrate voting on Election Day.

Head to Marie Claire to read more of Teigen’s interview.