The federal government is quietly developing an agriculture climate change plan that would allow big business to buy carbon offsets from farmers in a bid to incentivise emission abatement without creating friction with conservative MPs who oppose a carbon price.

Agriculture Minister David Littleproud is creating a market that allows farmers and business to trade carbon offsets – which would be earned by farmers when they store carbon in plants and soil – as part of a push to get the agriculture sector to reach net zero emissions without losing productivity. 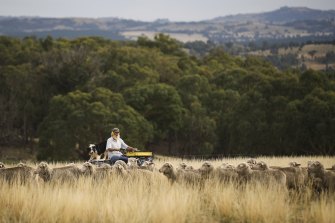 The appetite of farmers to deliver carbon abatement is untested.Credit:Alex Ellinghausen

The federal government’s “technology not taxes” climate mantra rules out creating a carbon price for a market to trade credits earned by companies that reduce their emissions, which is the policy economists have identified as the most efficient way to cut emissions.

The new voluntary system would allow investors, typically from polluting industries that want to offset environmental impacts, to buy credits in carbon abatement and biodiversity gains earned by farmers who revegetate parts of their land.

The policy could involve incentivising the planting of trees and shrubs in gullies and on ridges that are unproductive for agriculture but boost habitat for flora and fauna, including a focus on native and threatened species and habitat that boosts biodiversity.

Mr Littleproud’s market-based move could calm the climate culture wars in his party by removing some political arguments from emissions abatement and letting the market reward farmers for climate action.

Significant questions about the plan remain.

The Coalition has so far refused to set an emissions reduction goal, meaning it’s up to farmers to buy into their schemes, and their appetite to deliver carbon abatement is untested.

According to Mr Littleproud, big business is keen to buy into the scheme, and although many companies have set themselves ambitious emissions reduction goals, their appetite for a voluntary abatement scheme is also untested.

Another question mark hangs over the plan: how reliable will the carbon abatement be? Tight regulation would be needed to ensure the revegetation paid for on paper was delivered and maintained on the ground.

While most major agricultural representative groups have moved ahead of government and set their own climate goals, they emphasise caution over the design of carbon payment schemes, which they say must not restrict them to carbon abatement contracts where they bear the sole risk that drought, fire, or flood would wipe out the environmental gains.

Nevertheless, Mr Littleproud said if 16 per cent of Australia’s farmland was revegetated, the carbon captured in plant growth could offset all agricultural emissions.

“With farmers rejuvenating their unproductive landscape, we (the farm sector) could be net zero,” he said.

Despite the uncertainty, farm leaders are backing the scheme.

“This could be a game-changer,” National Farmers’ Federation chief executive Tony Mahar said. “It literally could change the landscape.

The government committed $32 million to develop a platform to trade the biodiversity and emissions abatement credits from re-vegetation as part of a $230 million farm policy.

It includes $100 million to lure farmers to measure their soil health and participate in emissions reduction funds, as well as $37 million for research to lower the cost of measuring carbon sequestration soil.

However, many climate policy analysts say while emissions offsets are important, the need to halt global warming is so urgent that rapid emissions reduction are also needed — especially by switching from fossil fuels to renewable energy and replacing combustion engines with electric vehicles.

Climate policy remains a controversial issue that threatens to split the Coalition party room. On one side of the debate are inner-city Liberal MPs such as Katie Allen and Trent Zimmerman whose constituents are calling for ambitious climate goals.

On the other side are right-wing MPs, including prominent Nationals Keith Pitt and Senator Matt Canavan, who say regional industries including coal and agriculture would bear the cost of ambitious climate policy.

Prime Minister Scott Morrison is stuck between local politics and the international push to climate action. He has not set a deadline for Australia, as has occurred in other developed nations, but he says his “goal is to reach net zero emissions as soon as possible, and preferably by 2050”.

The Farmers’ Federation has set a target for net-zero emissions by 2050. The red meat sector set a goal in 2017 to reach net-zero by 2030 and GrainGrowers has committed to developing a 2030 goal and the pork industry aims to go beyond carbon neutrality as soon as 2025.

“It takes the left versus right debate out of the equation. Every bank is looking at investing in natural capital, every multinational.”