There’s a sense among Australians that the political chaos and growth of the far-right movement in the United States is some kind of faraway spectacle, disconnected from our own realities. We watch, we shake our heads, we say to each other “Gee, I’m glad I live in Australia”, and we move on.

But the reaction of senior government figures in Australia to that final, violent spasm of the Trump-era last week, when protesters stormed the Capitol, should be a wake-up call to all of us. Australian politics isn’t at risk of mimicking Trump’s embrace of white nationalism, far-right conspiracies and hate speech. It already has. Most of us just haven’t wanted to accept it. 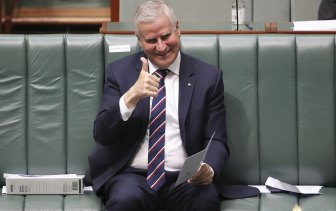 Michael McCormack is under fire for comparing the Black Lives Matter protests with the Capitol riot.Credit:Alex Ellinghausen

While senior Republicans in the US have condemned the way President Donald Trump fanned the flames of violent insurrection last week, Australia’s acting Prime Minister has deliberately downplayed the horror of what played out in Washington DC.

Over three separate media appearances on Tuesday, Michael McCormack compared the Capitol riots to the Black Lives Matter protests, described those who supported the Black Lives Matter campaign as “bleeding hearts” who were “confecting outrage”, and declared that “all lives matter”, adopting a favourite phrase of the far-right that is used to write off valid concerns about police brutality and structural racism in the US and Australia.

McCormack’s comments reflect a deliberate and concerted effort to embrace racist rhetoric, in order to downplay the political violence in the US. And their significance cannot be understated.

The Deputy Prime Minister’s comparison between Black Lives Matter and the Capitol riots was ostensibly based on the fact that both caused damage. It’s an absurd justification. Even if there was some way to quantify and compare the total damage done (To property? To livelihoods?) they are incomparable events. One is a global movement for racial justice aimed at correcting the consequences of hundreds of years of slavery, dispossession and discrimination. The other was an attempt to violently seize control of the political centre of the most powerful nation on earth, encouraged and abetted by a president who had created an anti-democratic coalition of white supremacists and conspiracy theorists.

By equating the two, McCormack downplayed the significance of the Capitol riots and refused to take a firm and unequivocal stance against the ideology that inspired them. And he effectively declared that the Australian government viewed the biggest modern movement for racial justice as no better than a riot, not deserving of credibility. 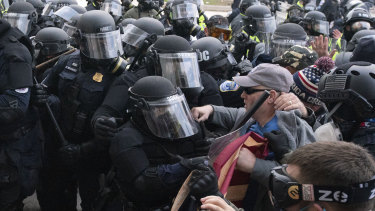 Capitol police officers in riot gear push back demonstrators trying to break a door of the US Capitol last week in Washington.Credit:AP

Trump might be gone but the politics he represents are embedded at the highest levels of our own political system.

None of this is new. In March 2019, just days after an Australian man killed 51 Muslims at their place of worship in Christchurch, New Zealand, Minister for Home Affairs Peter Dutton accused Greens leader Richard Di Natale of being “just as bad as Fraser Anning”.

Di Natale had criticised the growing acceptance of hate speech in Australian politics and had singled out Dutton’s comment that it was a mistake to settle Lebanese Muslims in Australia. Anning had blamed the victims of Christchurch for their own massacre, because they migrated to New Zealand. According to Dutton, these two statements were just as bad as each other.

There was no consequence for Dutton. He wasn’t reprimanded by his leader. He remained in his portfolio, which includes oversight of the security agencies responsible for combatting the threat of the far-right. A few months later his party was returned to government. The Christchurch massacre, and the political response, barely featured in the campaign.

In hindsight, that was a watershed moment for our political class. The total lack of any kind of introspection around that attack and what it said about how toxic our media, politics and society had become, is precisely how two years later we ended up with the acting Prime Minister of Australia turning an attempted far-right insurrection into an attack on Black Lives Matter protesters.

What would that introspection have resulted in? It would have forced us to reckon with the fact that the Christchurch shooter was born and raised in Australia, and according to the Royal Commission into the attacks, was radicalised here after absorbing local media and our political culture. 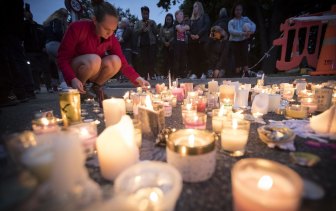 People gather outside the Al Noor mosque in Christchurch to pay their respects after the massacre in 2019. Credit:AP

It would have forced us to acknowledge that the ideas motivating the actor, particularly the white supremacist "Great Replacement" conspiracy, were not confined to the dark corners of the internet but were to be found on the pages of the most read newspapers in the country.

It would have forced us to accept that Australia has become a safe haven for those who have been made persona non grata in their home countries for their far-right views, and that our media ecosystem serves to validate them, by plucking them from the fringe and beaming them into TVs and laptops around the country.

The events of the past four years – from the election of Donald Trump, to the Christchurch attack and the terrorist atrocities it inspired, to the Capitol riots – have made it blindingly clear that white nationalism and far-right extremism are the most significant issues facing Western countries. If anything, that’s more true in Australia than anywhere else. But as we saw from the response to Christchurch and McCormack’s most recent comments, we are perhaps the least equipped to deal with them.

Osman Faruqi is a journalist and the editor of Schwartz Media's daily news podcast 7am.