Mr Kelly was banned in February from posting on Facebook, where he had more than 80,000 followers on his official page, after he continually promoted unproven treatments and theories for COVID-19 contradicted by official government and medical advice. 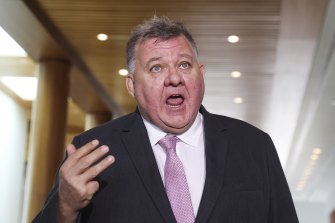 Independent MP Craig Kelly has had his official Facebook page shut down by the platform for repeatedly spruiking COVID-19 misinformation. Credit:Alex Ellinghausen

Facebook confirmed on Monday that it had permanently deleted Mr Kelly’s page for his ongoing failure to comply with its misinformation policies.

“We don’t allow anyone, including elected officials, to share misinformation about COVID-19 that could lead to imminent physical harm or [misinformation about] COVID-19 vaccines that have been debunked by public health experts,” a Facebook spokeswoman said.

He quit the Liberal Party in February, claiming he had been told by the Prime Minister’s office to “shut up” in regards to his promotion of misinformation on Facebook or he would be dumped as the party’s candidate for Hughes.

His defection to the crossbench came after a widely-publicised clash with Labor frontbencher Tanya Plibersek in the corridors of Parliament House, where she accused him of spreading “crazy conspiracy theories”.

Several weeks later, Facebook suspended Mr Kelly for at least seven days and deleted several of his posts, including one where he likened the wearing of masks by children to child abuse. He used the page to heavily promote ivermectin and hydroxychloroquine as treatments for COVID-19, which are unproven.

He described his suspension at the time as a “very sad day for freedom of speech.”