Debate sparked over the correct order to organise your kitchen drawers

Dad sparks heated debate over the ‘correct’ order to organise your kitchen drawers – so do you agree with him?

A father-of-three has sparked debate over the ‘right’ way to arrange your kitchen drawers after sharing a labelled photo of his layout online.

Jordan Watson, the New Zealand creator of the ‘How to Dad’ Facebook account, shared a photo of his drawers on Sunday and said if his followers’ drawers weren’t ordered the same way they needed to ‘sort their lives out’.

The father had the cutlery drawer first, followed by the utensils, tea towels and miscellaneous products at the bottom.

‘A few people are arguing tea towels should be in the bottom drawer,’ he said in a separate post. ‘I’ll let you in on a DadHack here. Babies will moan at your feet as you try and cook three meat and vegetables for dinner.

‘That is unless you have the bottom (baby accessible) wonderland of randomness drawer open for them to entertain themselves. Obviously remove the pointy things from the big random mess drawer first.’ 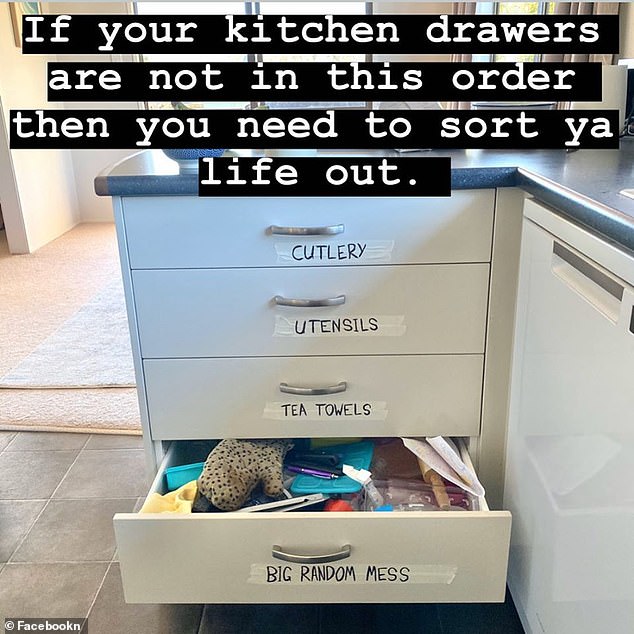 Jordan Watson, the New Zealand-based mastermind behind the ‘How to Dad’ Facebook account, shared a photo of his cabinetry on Sunday 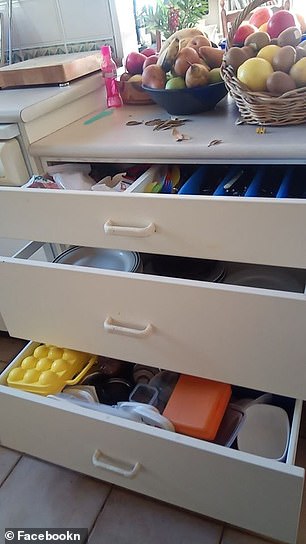 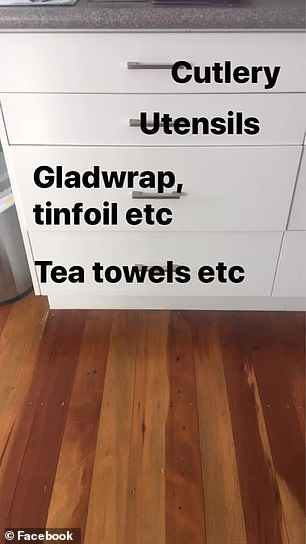 ‘A few people are arguing tea towels should be in the bottom drawer,’ he said in a separate post. ‘I’ll let you in on a DadHack here. Babies will moan at your feet as you try and cook three meat and vegetables for dinner

Many agreed with the arrangement, saying that it was ‘spooky’ how everyone seems to have their drawers set up in this way.

But others said they had drawers dedicated to plastic rubbish bags, baking paper and Cling Wrap as well.

‘We have one cutlery drawer mess and then three big random mess drawers. And don’t get my husband started on the plastic nightmare cupboard,’ one woman said.

‘Ours goes utensils, baking paper/foil/random bits, cutlery then tea towels. Gets almost every one that the cutlery isn’t at the top, but that way our two-year-old can help set the table without assistance,’ said another.

A third added: ‘Tea towels live in the linen cupboard! Third drawer is for rolls of glad wrap/aluminium foil/baking paper’.

It comes just a week after Mr Watson declared that knives must be laid on the left, forks in the centre and spoons on the right of the cutlery drawer.

More than 9,000 people weighed in on the photo, the vast majority of whom disagreed with the depicted layout. 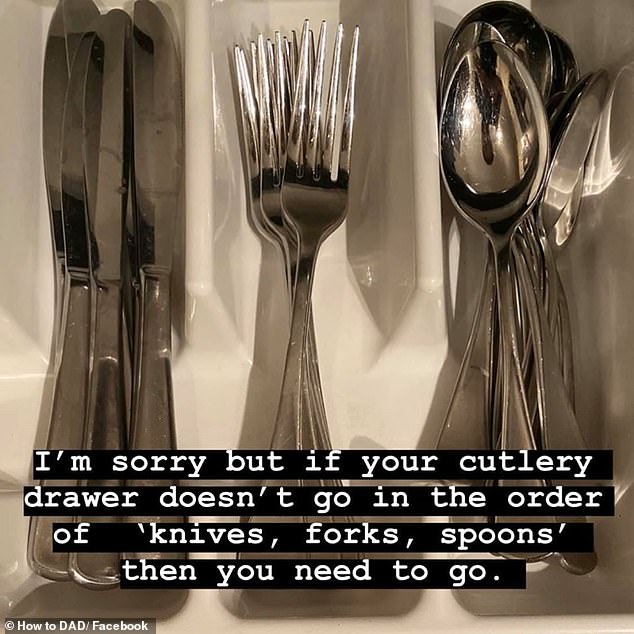 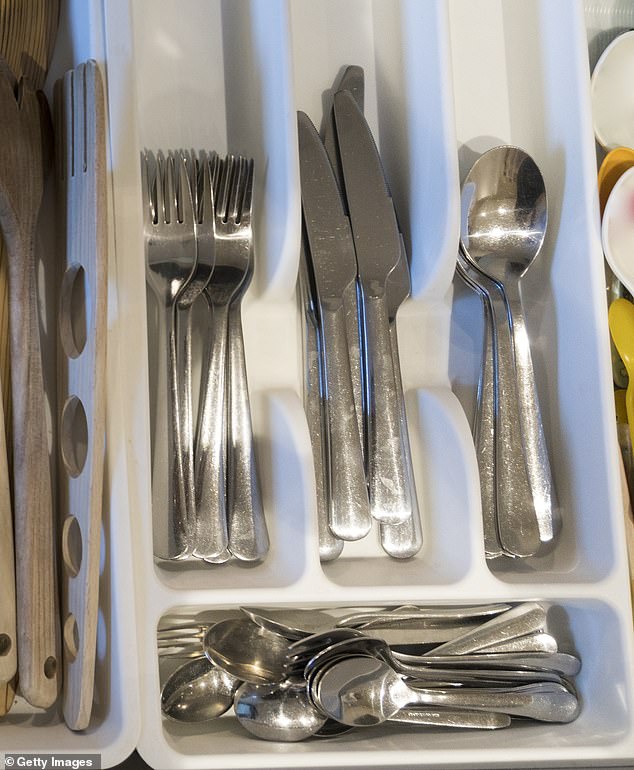 Most said drawers should be arranged the same as you set a dinner table, starting with forks on the left, followed by knives and spoons on the right as shown here (stock image)

They saw storing knives on the left as confusing and counter-intuitive because you always eat with a knife in your right hand.

Most said drawers should be arranged the same as you set a dinner table, starting with forks on the left, followed by knives and spoons on the right, with a small section for teaspoons running horizontally across the bottom of the tray.

‘Why would you put the knives on the left in the drawer when at the table you hold your knife with your RIGHT hand?’ a mother from Dunedin on New Zealand’s South Island said.

How do you arrange your cutlery drawer?

How do you arrange your cutlery drawer?

‘Put the knife and fork in the drawer as you would lay them on the table…then spoons go to the side. Honestly, I despair for mankind. I had no idea so many people were getting this simple concept so wrong!’

An Israeli woman agreed, saying drawers should always be arranged with forks on the left, knives in the centre and dessert and soup spoons on the right.

But not everyone accepted the standard table setting pattern.

‘This is all wrong, it’s messing with my head. It’s forks, spoons, then knives,’ a man said.

A Queensland father responded that only ‘psychopaths’ stack spoons in the middle of the tray. 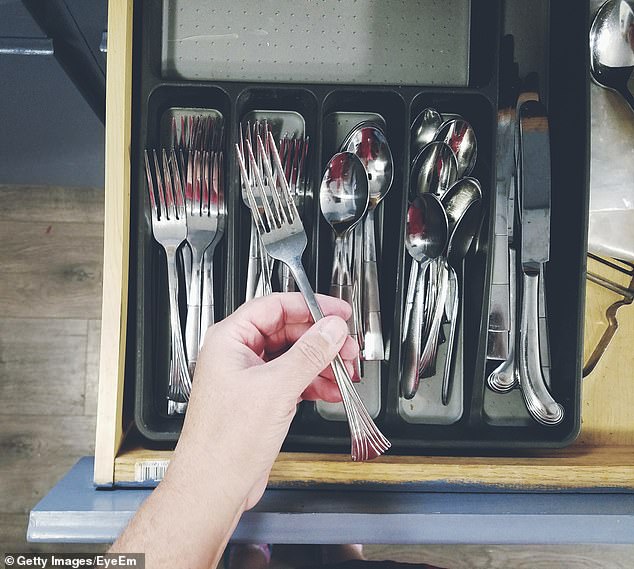 One man said drawers should always run forks, spoons then knives, as pictured, but his approach was branded ‘psychopathic’ by a father from Queensland (stock image)

One particularly passionate Auckland woman demanded to know why spoons would ever come between forks and knives.

She said the layout should run forks followed by knives, dessert spoons and soup spoons, with teaspoons along the bottom.

‘And heaven help anyone who has their teaspoons facing in different directions!’ she said.

Is there a correct way to arrange your cutlery drawer?

However most people prefer to work intuitively from left to right, the same way you would set a table, with forks on the left, followed by knives with blades facing left, and finally spoons.

‘It always makes sense to have the handles facing out and nearest to you, so that’s what you grab hold of when taking them out,’ Ms Maytom said. 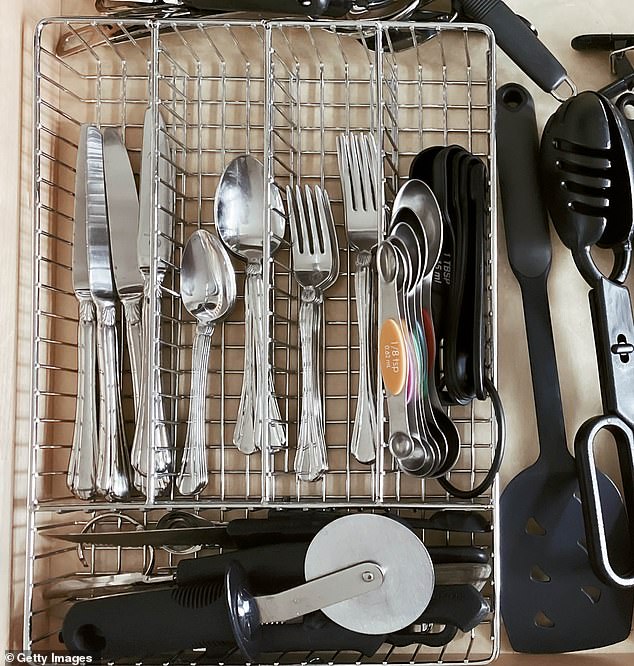 An Auckland woman said drawers should start with knives on the left, then large spoons and forks (stock image)

A woman from New Zealand’s North Island said the only way to store cutlery is with spoons on the left, forks in the middle and knives on the right.

‘I’ve always put it that way, and it drives me mad when the other half puts them in a different order. It’s just not right any other way,’ she said.

Her approach was supported by a Wellington man, who said spoons should always be on the left because they are ‘first out for cereal’ at breakfast time.