Defence Force chief Angus Campbell expects to see continuing violence in Afghanistan between the Taliban and the nation’s security forces but doesn’t believe the extremists will necessarily overrun the country once NATO forces leave later this year.

General Campbell spoke about Australia’s achievements in Afghanistan ahead of the final troops pulling out of the country in September, saying he hoped the overall picture of 20 years of engagement wouldn’t be overshadowed by war crimes alleged to have been committed by a handful of Special Forces troops. 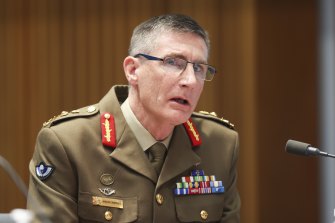 Chief of the Defence Force Angus Campbell spoke about Australia’s achievements in Afghanistan during a Senate estimates hearing.Credit:Alex Ellinghausen

Prime Minister Scott Morrison announced in April the last 80 or so Australian troops would withdraw from Afghanistan by September. Last week he also said Australia’s embassy in Kabul would close on Friday, although the government hopes to reopen it “once circumstances permit”.

The decision by the United States and its NATO partners, including Australia, to draw down forces over time was a reflection that “this was not going to be a conflict that would be resolved militarily”, General Campbell told a Senate estimates hearing on Tuesday.

He said negotiations between the US and the Taliban first, and then between Afghan parties were vital to returning peace to the country.

“We see a continuing level of violence and of the efforts of the Afghan forces against the Taliban,” General Campbell said, highlighting the southern and eastern provinces which were the Taliban’s traditional strongholds.

“There are areas of the country where the Afghan security forces hold their own and they do well. There are other areas where clearly, the Taliban has initiative.

“I do not think the situation is … at all assured in terms of what the Taliban’s claimed or they would seek to claim. This is very much going to be a negotiated settlement.”

The British government has announced it will fast-track resettlement for hundreds of Afghan interpreters and their family who worked with western troops amid fears about their safety as the NATO forces drawdown.

Labor senator Penny Wong asked whether Australia would do the same for those who had helped our troops.

“These are friends of Australia, I think they deserve to be treated better,” she said.

Foreign Minister Marise Payne said the government had been processing visas for several years and would continue to do so.

Defence first assistant secretary Hugh Jeffrey said the department had received about 1000 applications since 2013 and certified 600 of them. This has led to 1200 Afghans – interpreters and their families – resettling in Australia.

Mr Jeffrey took on notice to find out how many applications had been received since Australia announced its troops would leave Afghanistan.

General Campbell said the story of Australia’s longest war was already being written and it “will be painted in different hues” with the recent focus on alleged war crimes uncovered in the Brereton report.

“It will be coloured in part by the findings of the Afghanistan inquiry report and by the work of the Office of the Special Investigator,” he said.

“But it is my hope that this important work will be understood from the perspective of a larger canvas.”

Senator Payne told the committee the embassy closure was based on military and security advice and was the subject of several cabinet discussions. She also spoke with Afghan leaders and NATO officials about it during a visit to Kabul on May 10.

Defence officials said they provided advice to DFAT about the security situation over several weeks before the decision was made.