Dickie Bird on Covid, the Queen, Thatcher… and hating hawkeye!

‘This year has been tougher than the war’: Legendary cricket umpire Dickie Bird on Covid, corresponding with the Queen, knowing Margaret Thatcher ‘very well’… and hating Hawk-Eye!

It is starting to spit in Barnsley and, just like in days of old, Dickie Bird is nervously looking up at the sky.

‘No, I wouldn’t take you off for this — play on,’ smiles the legendary umpire, who jokes he no longer has his light meter to consult.

Dickie, it transpires, has called it right again as the most glorious spring sunshine soon breaks out while he sits with Sportsmail in his garden looking on to the Pennines. 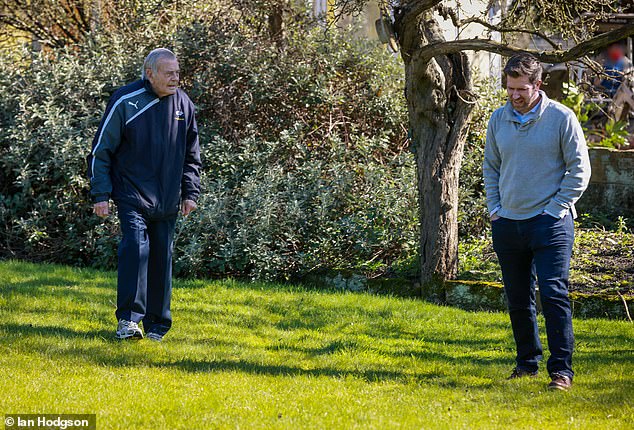 Sunshine after the rain. It perfectly encapsulates how Dickie is feeling ahead of his 88th birthday next month after what has been the toughest year of his storied life.

‘I had my second jab last weekend and this relief shot through my body,’ says Dickie, who is proudly wearing a Yorkshire County Cricket Club coat and a cricket-themed face mask. ‘It’s the first real light at the end of the tunnel we have had.’

The past 12 months have hit Dickie particularly hard because he has been on his own in his quaint 17th-century cottage, aptly named White Rose, which has been his home for more than 50 years.

‘I never got married because I was married to cricket, I gave my life to it,’ he admits. ‘If I have one regret in life it’s that I haven’t had a family. If I’d had a young lad who played cricket it would have been marvellous.’

Dickie has not been inside a shop for a year, with neighbours delivering food to his doorstep. Even his niece, who usually does his cleaning, has not been allowed in his home.

‘It’s a shambles inside,’ he laughs. But Dickie is serious when it comes to shielding in the coronavirus pandemic. ‘It’s been lonely and it’s been frightening,’ he says. ‘It’s been a long year, it’s been a grind. I went through the Second World War and that was very tough. Hitler flattened half of Sheffield and I’m not far from there. Then there was rationing and things like that but we pulled through that. So I’ve seen two really difficult periods — but I reckon this has been tougher.’

To keep himself sane, Dickie has exercised each day. He drew up an hour-long programme — including arm stretches, jogging on the spot and shuttle runs — and goes on 90-minute walks.

‘My advice to anyone would be: don’t sit in the house looking at the four walls. That’s the way to ruination. You’ve got to watch you don’t have this mental problem.’ 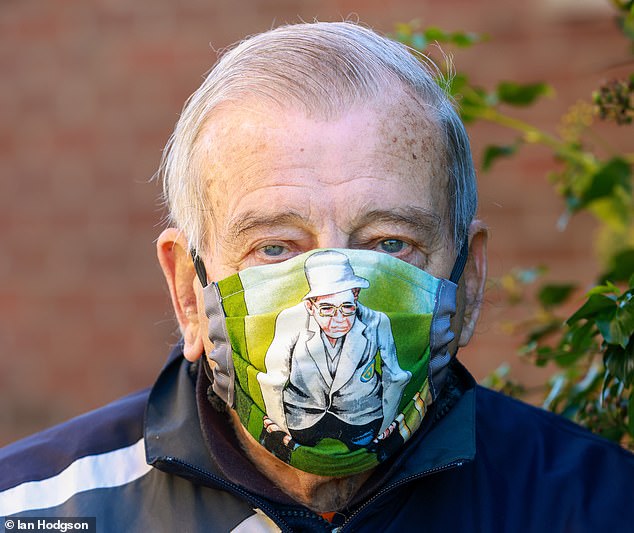 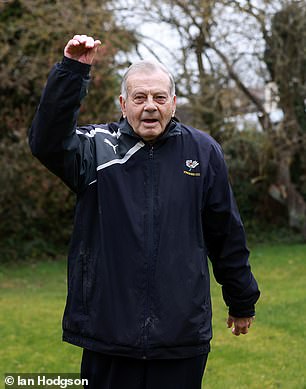 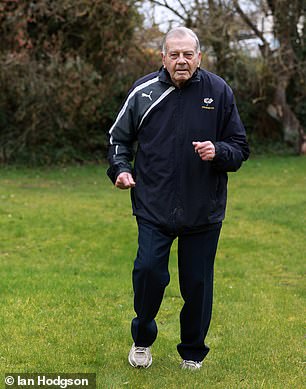 To keep himself sane in lockdown, Bird came up with his own exercise routine 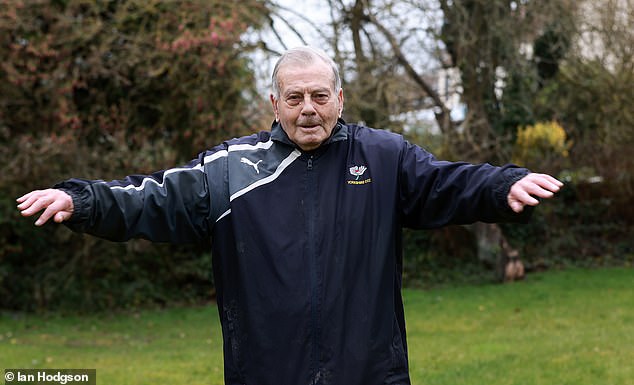 As well as his workout routine, Bird has been going on 90-minute walks to help stay healthy

When Dickie showed off his work-outs on local television earlier this month, the clip was shared on social media and has been watched 1.2 million times.

‘Never! Is that right?’ he asks in shock after being told the video has gone viral. ‘I’d have thought they’d have forgotten me by now.’

But how could you ever forget Harold ‘Dickie’ Bird? Even the Queen hasn’t.

‘I met the Queen 29 times and I still correspond with her,’ he explains. ‘I’ve got a letter in there that I just got the other week. She asked me how I am and Prince Philip sent his best wishes as well.’

Of those meetings with Her Majesty, the one that stands out came in November 1990. 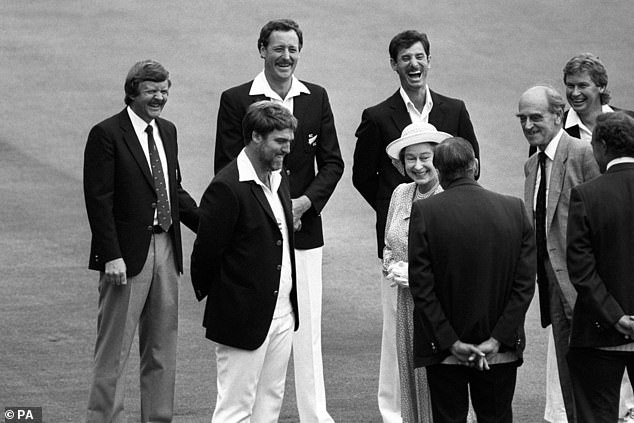 Bird’s career saw him meet people such as the Queen and former Prime Minister John Major – pictured the Queen shares a joke with Bird (back to camera, 4th right) during a visit to Lord’s 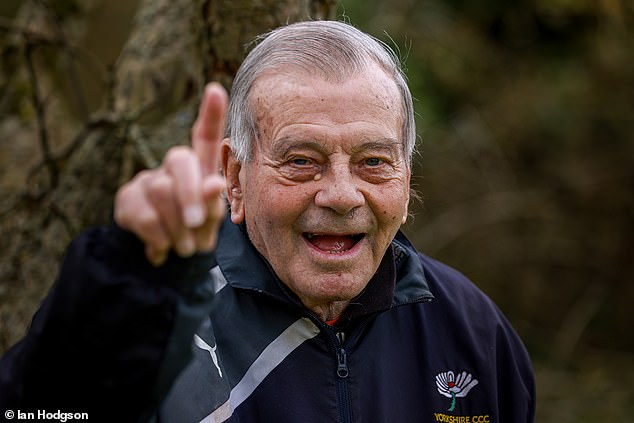 ‘I was sat in the house one day and the phone rang,’ he recalls. ‘The voice said, ‘This is the master of the household ringing from Buckingham Palace, I have been commanded by Her Majesty the Queen to see if you are available to have lunch with her at Buckingham Palace’.

‘I said, ‘If I’ve been invited to have lunch with the Queen, I’ll walk it from Barnsley’.

‘I had to be there at 1pm and I arrived at 8.30am. The policeman on the gates said to me, ‘We’ve got to have the Changing of the Guard first — we can’t stop that even for Dickie Bird’.

‘So I went into a little coffee shop and sat there for four hours. I then had a marvellous lunch with her and sat with her all afternoon. That was the best day of my life.’

Famously early for everything, Dickie tells a similar story about when John Major hosted him at Chequers. ‘I got there at 8.30am again and security at the top of the driveway phoned Major, who said, ‘I’m still in bed — tell Dickie to come down and have his breakfast with me’. So I had breakfast with him and then I had lunch!’

Another Prime Minister Dickie dined with was Margaret Thatcher and it was a relationship he found to be useful when he umpired Zimbabwe’s first Test against India in Harare in 1992. 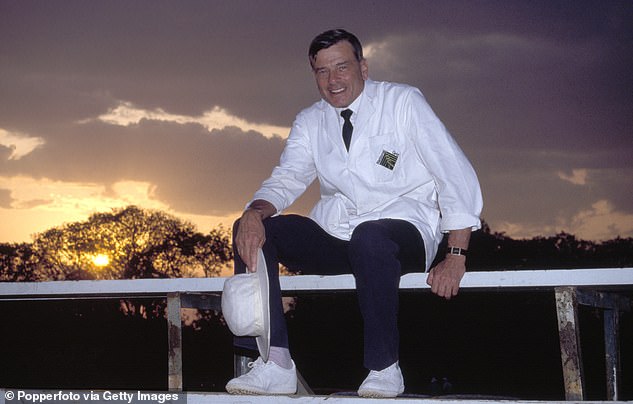 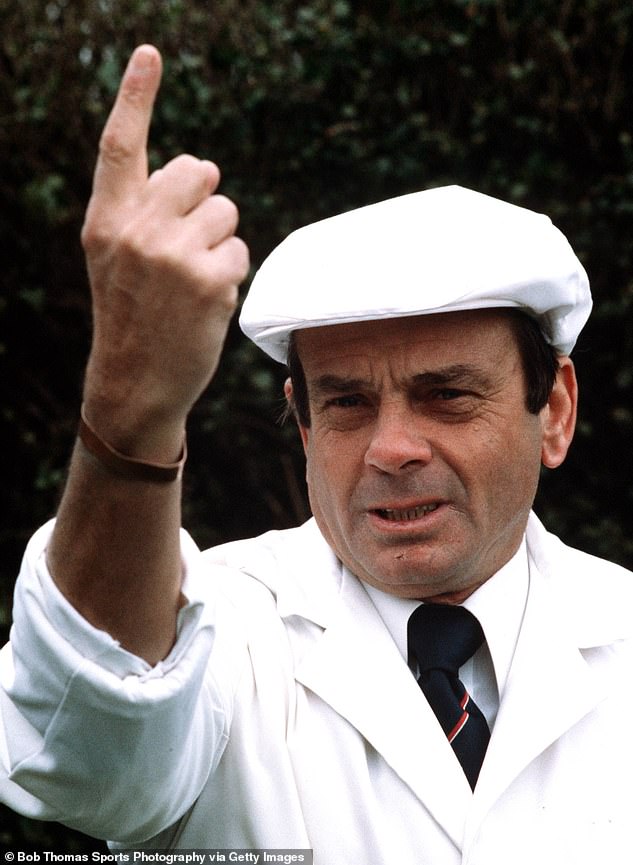 ‘The teams were lined up and Robert Mugabe came down shaking our hands,’ he remembers. ‘He got to me and said, ‘Are you a friend of Margaret Thatcher?’ I thought, ‘What do I say here?’ and then told him, ‘I know her very well, sir’. He said, ‘If you are a friend of Margaret Thatcher, you are welcome in my country’. He was surrounded by men with machine guns — it was a good job I said the right thing!’

Dickie umpired in 66 Tests from 1973 to 1996. He stood in three World Cup finals and ranks his first, the 1975 inaugural showpiece when West Indies beat Australia at Lord’s, as the greatest game he ever officiated.

‘At the end of the game, a West Indian supporter pinched my white cap straight off my head,’ he says. ‘A year later, I was on a bus in London and a conductor came round and was wearing a white cap. I asked him where he got it.

‘He said, ‘Haven’t you heard of Mr Dickie Bird, man? This is one of his caps. I took it off his head in the World Cup final. I am so proud of it’. I never let on who he was talking to!’

No official in world sport has ever enjoyed fame like it. His 1997 book is one of the best-selling autobiographies in British history and made him a ‘millionaire overnight’, a large amount of which he donated to children’s heart surgery funds.

‘I’ve got a lump in my throat,’ says this tough old Yorkshireman, who starts to well up as he remembers visiting poorly babies in hospital. ‘It means more to me than anything when parents thank me.’

Dickie has two racehorses named after him and appeared in a host of adverts, including one for Pepsi in India when he dressed up as a judge. But his favourite television moment came when he was the subject of the BBC’s This Is Your Life in 1992. ‘Presenter Michael Aspel says it’s the best one they’ve ever done,’ he grins.

‘They came from all over the world for me — Dennis Lillee, Garfield Sobers, all the greats. I was stunned. That was the respect they had for me. You can’t buy that respect, mate, can you?’ 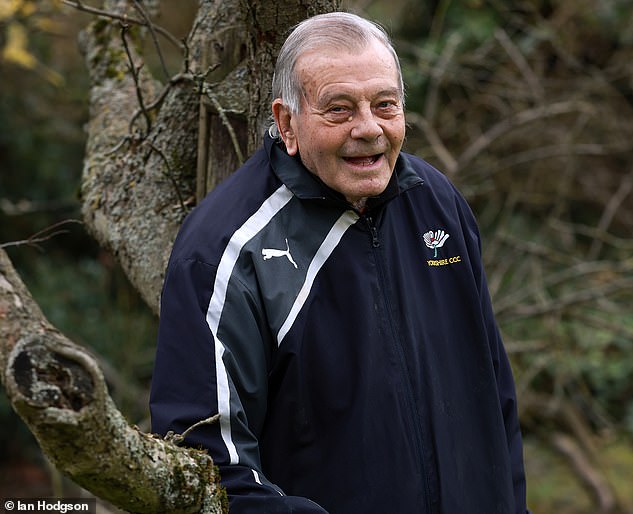 Bird spoke to Sportsmail at his home in Barnsley, where he has been throughout the pandemic 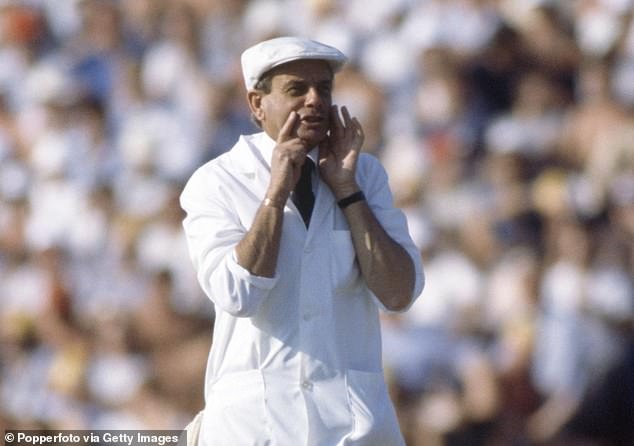 Bird pictured back in 1985, during a Test match between England and Australia at The Oval

Lillee has phoned him during lockdown, as has New Zealand legend Richard Hadlee and last week he received a text message from Sir Alastair Cook. He still receives requests for signed photographs and has a pile stacked up on his mantelpiece waiting to post off.

Another source of personal pride is the life-size statue of him in Barnsley town centre. He laughs at how local students used to hang bras and knickers on his raised finger until the bronze figure was lifted on to a five-foot plinth.

After meeting with Sportsmail, he calls later to note that he was also awarded the freedom of Barnsley and has received four honorary degrees, from Huddersfield, Leeds and Sheffield Hallam universities and Bradford College.

They sit alongside his MBE and OBE. ‘It’s like a museum in my house,’ he says. ‘Cricket has been good to me and I’ve been good to cricket. It is the greatest game in the world. Nothing can touch it.’

It is 25 years this summer since Dickie’s last Test as an umpire, when England and India formed a guard of honour and he received a standing ovation from the crowd at Lord’s. ‘I had tears in my eyes, they said I got a bigger ovation than Bradman when he had his last Test at the Oval,’ he says.

Umpiring, of course, has been transformed since then and not for the better, according to one of the greatest to wear the white coat. 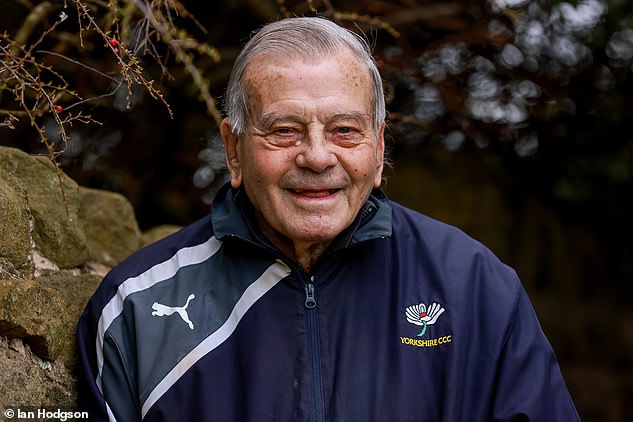 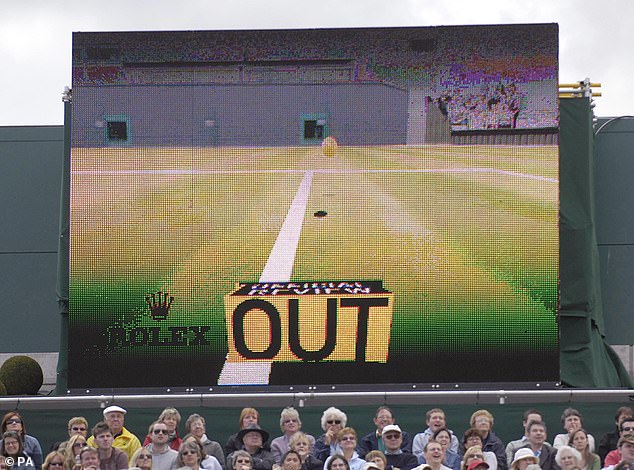 He isn’t a fan of hawkeye, saying that technology has slowly eroded umpire’s authority

‘I think all of the authority has been taken away from the umpire,’ he states. ‘If somebody asked me who I thought were the best umpires in world cricket today, I couldn’t tell you because technology makes all the decisions.

‘It’s all right for close run-outs but Hawk-Eye can’t tell me the bounce of the ball, the state of the pitch, the spin, the movement off the seam. It has taken something away from the game. It should be left to the umpires to make the decision. Let them get on with the game.’

Still, technology cannot dampen Dickie’s enthusiasm for cricket. After recovering from a serious stroke he suffered in 2009, his greatest recent thrill came when he served as Yorkshire’s president from 2014 to 2016, a period which saw them win back-to-back County Championship titles.

‘I went all over with the lads on the team coach,’ he says. ‘It was probably the best two years of my life.’

Dickie further cemented his legacy at Headingley when he paid £125,000 out of his own pocket for a new players’ balcony. His own regular seat is on the balcony above, ‘smack behind the bowler’s arm — I see everything’. 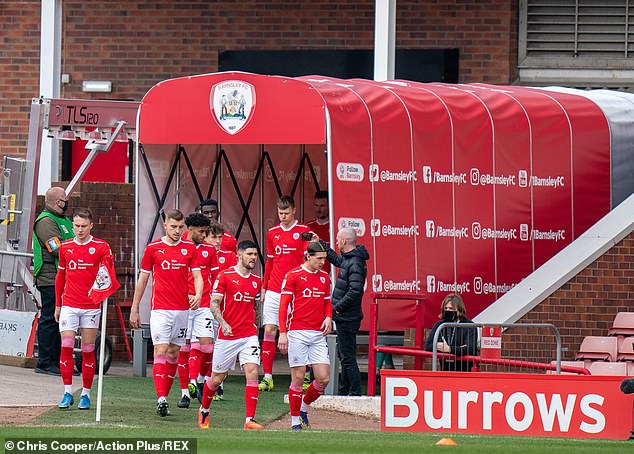 He is now counting down the days until he is back in that seat. April 8, when Yorkshire host Glamorgan in their County Championship opener, is circled in his diary.

‘I’m looking forward to the cricket now. The chief executive Mark Arthur has had a chat with me. They’ll let me in. Even if I have to sit on my own in the stand. I’ll be there before the players!’