In the fourth episode of season two, Emily Dickinson’s struggle is real — but then again, it feels like everyone’s having a bad day on ‘Dickinson’ this week.

The sun rises on Emily Dickinson as she wakes to start work on a new poem. Like many of us working from home, she makes sure her space feels totally zen: pencils sharpened, crisp fresh paper at the ready, and then – nothing. Our girl’s got nothing. Behold: the dreaded terror known as writer’s block.

Making her way to the kitchen, she laments to her maid, Maggie, that her thoughts are plagued by fear that editor Sam Bowles will reject her ‘submission’. She calls him ‘my master,’ a nod to the real Emily Dickinson’s poems that are thought to be about Sam, and insists she feels like there’s no point in ever writing again.

To take her mind off things, she walks with her parents and Maggie out to the yard, where the ‘teens’ have dug a rather large hole. Stranded inside is one of Lavinia’s cats Drummy Doodles (so cute), and Mrs. Dickinson is beside herself. Mr. Dickinson, on the other hand, seems unbothered and takes off with Emily to go birding, leaving Mrs. Dickinson stewing. 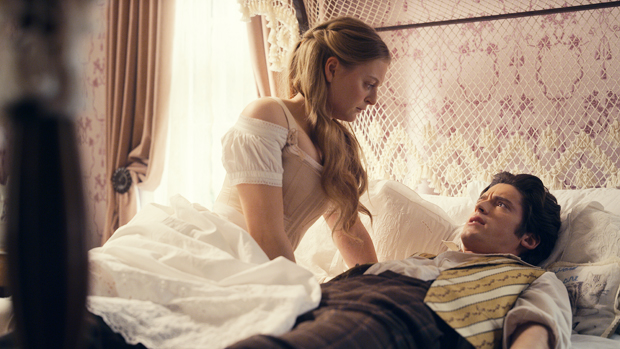 Back at the house, Vinnie and Ship are hooking up in her room – or at least, she’s trying to hook up with him. Ship doesn’t seem to be into it. Once again, he goes on and on about them acting “improper” and that he doesn’t want to get caught up with another Lola Montez *cue sexy guitar music*. But talking about Lola and her ‘spider dance’ just gets Vinnie hotter, and when Ship insists they’re moving too fast, she counters back, “We’re not even engaged!” Eh, careful what you wish for!

Back outside, Edward and Emily — wearing the best straw hat I’ve ever seen, please where can I get one – come across Austin talking to Frederick Law Olmsted; the same Frederick Law Olmsted who would be the lead architect of New York’s legendary Central Park. Indeed, history proves the Olmsted, played by Veep star Timothy Simons, was asked by the Amherst Ornamental Tree Association to consult on the town’s common, but whether he took a notable journey with Emily around the town, is unknown. But this is Dickinson, damn it, so yeah, he’s gonna! Emily is captivated by his creative process and decides to join him as he explores the town.

With Emily gone, Austin welcomes the moment alone with his father, but Edward only complains more about the ‘teens’ terrorizing his home and wife. Austin offers a solution: he will adopt the Newman girls. After all, their inheritance is paying for his house. Pleased to be rid of them, Edward agrees, and Austin looks excited – until he realizes he has to tell Sue. Back home, Sue, who is getting increasingly less like the Sue Austin/Emily/we all fell in love with by the minute, is rightfully frustrated, but uncharacteristically cold to Austin when he shares the news. He tells her again how much he wants to be a father, and this seemed like the best solution for them both. They can have a family, without Sue having to give birth. Sue resigns that he’s made up his mind, but refuses to be happy about it. As he leaves, she curls up in to a very sad looking ball. 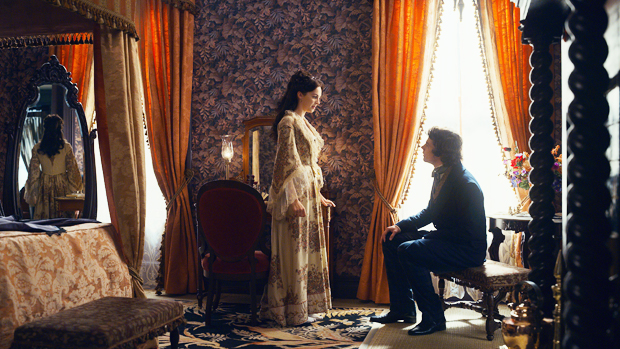 Elsewhere, Edward’s afternoon takes a turn when he accidentally falls into the massive hole in his yard. Perhaps nothing captures the collective feeling of humanity in 2020 better than Toby Huss repeatedly yelling, “I’m in a hole.”  His cries finally reach the ears of his wife, who, upon finding him in said hole, jumps in with him. Now, she can get some stuff off her chest, like how he needs to stop calling her “Mother” and how she misses the passion in their relationship. He laments they’ve just gotten too old, but Mrs. Dickinson isn’t buying it. Still, they work together to get her out of the pit, and when it’s her turn to raise him up — woman straight up leaves him there, giving him some more time to think about what she’s said.

Meanwhile, Emily follows Frederick around town, marveling at his confidence and opinions on everything from rose bushes to rocks. He invites her to explore a hedge maze and as they wander, Emily starts to get nervous they’re getting lost. “Getting lost is the whole point,” Frederick says. He adds that only by being so focused on something that you disappear into it, lose track of time, space, people – that’s how she’ll get her creative voice back. But as they continue to go deeper, Emily is still unsure. She finally tells Frederick the real problem “He holds my life in his hands,” Emily says of Sam. “It’s like I’m the daisy and he’s the sun and without the warmth of his approval, I can’t grow.”

But for Frederick, there’s a simple solution: “Refuse to be the daisy, start being the sun.” And with that advice, he disappears. Frightened, Emily goes looking for him.  Just when she thinks it’s hopeless, who should appear but Sam. Wouldn’t you know it, he’s been looking for her all day to tell her the good news – he loved her poem. He’s ready to publish her. When she doesn’t react as he’d like, she admits she felt so lost today. “When you’re famous,” he says to her, “and the whole world can see, you’ll never be able to get lost, ever again.” Somehow, that’s not exactly what she wants to hear.

And as for Vinnie, well, by days end, she finds herself engaged to Ship – you know, after he has his friends throw a bag over her head, pretend to kidnap her, drag her out into a field, unmask her, and, in front of most of the town, proposes. In the end, he misconstrues her words as an acceptance as she gapes at the words ‘Will You Marry Me’ painted on the side of her parent’s barn. Such is the start of all great love stories, right?