Check out what’s clicking on FoxBusiness.com

Older people with limited mobility and those with chronic health conditions requiring the use of electrically powered medical devices were especially vulnerable when Hurricane Ian slammed into Southwest Florida, and experts warn such risks to society's oldest are growing as disasters increase with the impact of climate change.

Almost all of the dozens of people killed by Ian in hardest hit Lee County were 50 or older, with many in their 70s, 80s and even 90s. That's highlighted the rising dangers for those least likely to be able to flee such disasters and those most likely to be impacted by the aftermath.

Climate change makes hurricanes wetter and more powerful, but it also increases the frequency of heat waves like ones that scorched the Pacific Northwest the last two summers, killing scores of mostly aged people. It's also intensified drought fueled wildfires like the inferno that incinerated the California town of Paradise in 2018, killing 85 people, again mostly older.

"It’s not terribly surprising that physically frail, socially isolated people are the most likely to die in these events. But it is politically significant," said New York University sociology professor Eric Klinenberg. "If we know people are at risk, why aren’t we doing more to help them?" 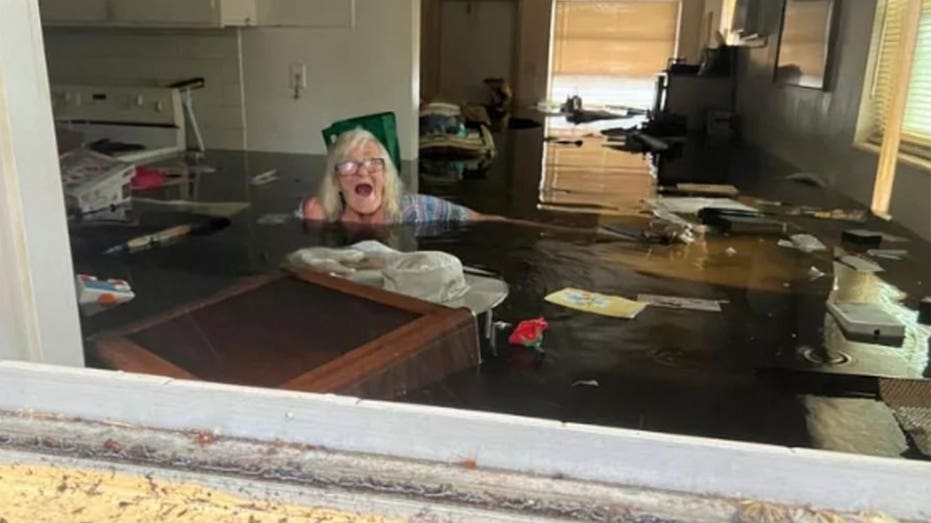 Klinenberg, who wrote the book "Heat Wave: A Social Autopsy of Disaster in Chicago" about extreme heat that killed more than 700 mostly older and Black people in July 1995, called Ian a mere preview.

"We saw this happen in Chicago, in (Hurricane) Katrina, in (Superstorm) Sandy, and we are going to see more and more as the globe becomes increasingly hotter," he said.

Florida in particular will feel the increased impact of climate-fueled disasters, sitting in the path of many Atlantic storms and with a large share of retirees drawn by warm weather, a vast coastline and relatively cheap housing. About 29% of Lee County’s population is 65 and older.

One of the more dramatic stories of Ian demonstrates the risks. Johnny Lauder's 86-year-old mother Karen Lauder, who uses a wheelchair, initially refused to evacuate. But as the water inside her home began to rise nearly above her head, she was unable to flee and her son had to come rescue her in an ordeal he documented.

The extreme dangers some face when they lose power was especially clear in Lee County, where an 89-year-old man died after the electricity he needed for his oxygen went out and then his backup generator failed. 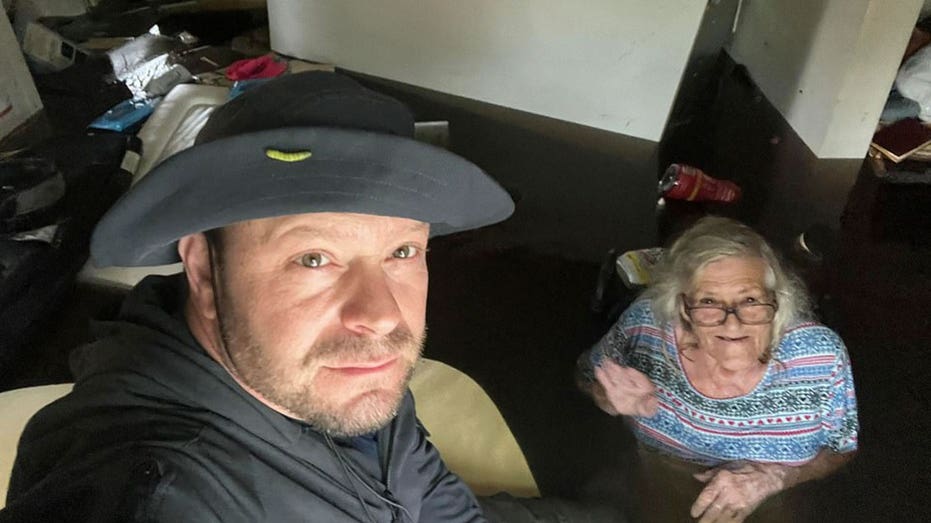 Florida has attempted to address some of these issues by setting up shelters where people with health conditions that require electricity for oxygen, dialysis and devices like ventilators can preregister to stay.

"There is room for improvement, but it would be wrong to say they aren't doing anything," he said.

Home-based networks that deliver care and services to older people, as well as neighborhood associations and faith communities can also help by checking on socially isolated older people, Johnson said.

Several hurricane survivors sat in wheelchairs Thursday outside one special shelter set up at an elementary school in Fort Myers.

FORT MYERS SMALL BUSINESSES FACE ‘A LOT OF WORK TO BE DONE’ AFTER HURRICANE IAN: RESTAURATEUR 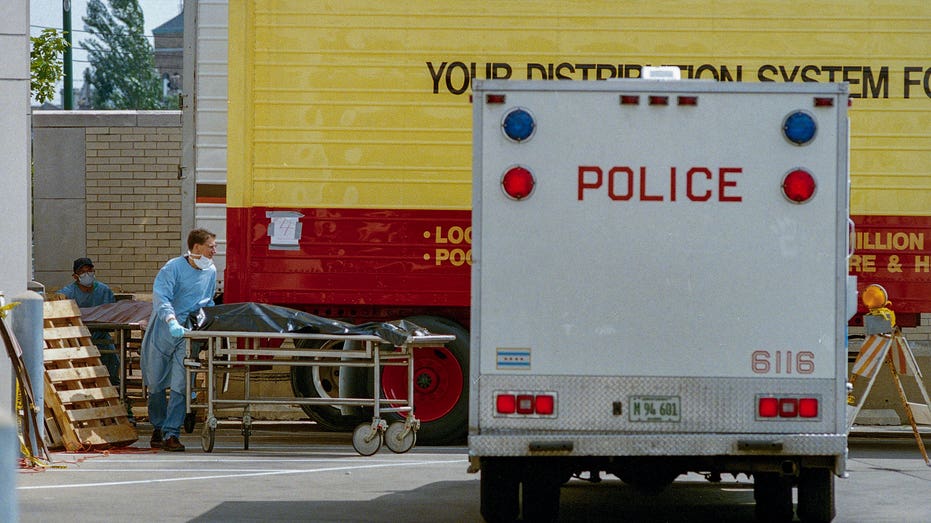 Merrill Bauchert, 60, was staying there because Ian destroyed his home and he needs electricity for the CPAP machine he uses for severe sleep apnea.

Bauchert said dozens of residents from a senior living facility were staying there, many of them with mobility problems or dependent on electrical medical devices to stay alive.

Large oxygen tanks were used at first for people with breathing problems, he said, but those were later replaced with mechanical oxygen generators for individual use. Conditions have improved with restored water service, but the early days were tough, Bauchert said.

With many people too frail to go outside and no sewer service inside, using the restroom involved putting a plastic bag in a toilet and sitting down, sometimes with help.

"You were actually doing your business in a trash bag. Take the trash bag, tie it in a knot, throw it in the trash can and put another bag in for the next person," he said. 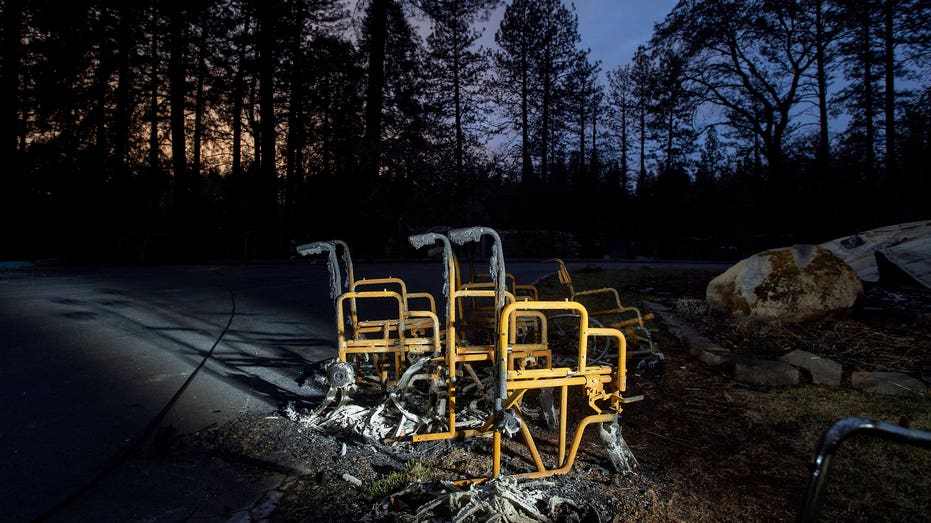 Gov. Ron DeSantis has recognized the disproportionate effect Ian had on the state's older residents, and the need for local groups to help their recovery.

"It hit in areas that have a lot of elderly residents, and I’ve met a lot of the folks," DeSantis said at a news conference Thursday. "So you’re somebody who’s maybe 85 years old. You may not be able to do the same home repair that you used to be able to do when you were younger."

While the death toll of over 100 and property damage from Ian was catastrophic, Hurricane Katrina caused far more deaths and destruction in August 2005.

Researchers have concluded that nearly half of those killed by Katrina in Louisiana were 75 or older. A 2006 Senate Committee report noted a failure by all levels of government to effectively evacuate thousands of older, sick and disabled people from New Orleans as neighbors with cars fled the city.

Older people are also at risk from heat in the days and weeks after major storms. 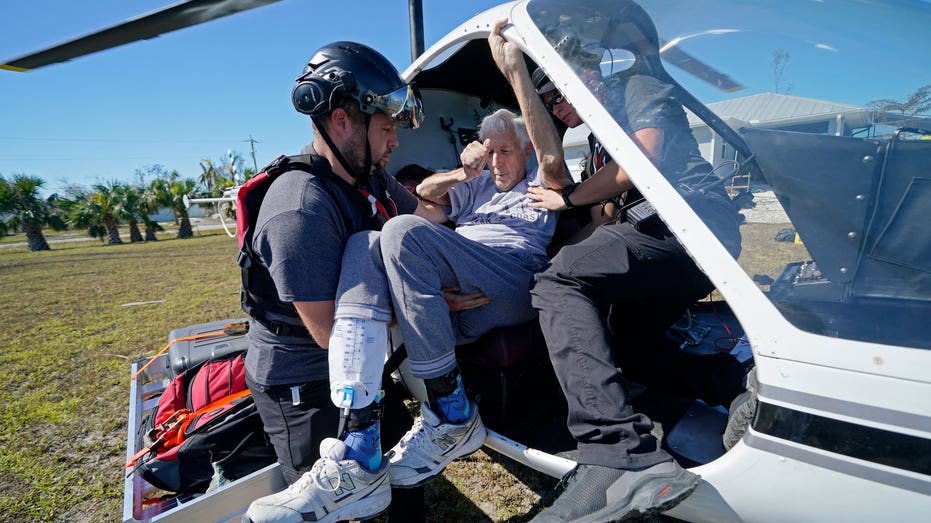 FILE – Members of mediccorps.org help evacuate Tom Acerbo in the aftermath of Hurricane Ian on Pine Island, Fla., Saturday, Oct. 1, 2022. The group arrived on the island with two helicopters, paramedics and volunteers, as the only bridge to the islan (AP Photo/Gerald Herbert, File / AP Images)

After Hurricane Ida slammed Louisiana in 2021, of nine New Orleans residents killed by heat and 10 for whom heat was a contributing cause of death, only four — two in each group — were under the age of 60, according to information provided by the Orleans Parish Coroner’s Office.

The aftereffects of Hurricane Irma in 2017 took an especially large toll. The direct impacts of the storm killed more than 90 people in the U.S., but researchers at the University of South Florida and Brown University found 433 additional residents at Florida nursing homes died within 90 days of the storm, compared to the same period in 2015, when there were no hurricanes.

The study was prompted by the heat-related deaths of 12 residents at a Broward County nursing home that occurred when the storm knocked out air conditioning and staff didn't move them to another facility. An administrator and three nurses were later charged.

Klinenberg, the sociologist who wrote about the Chicago heat deaths, said the fault lies in in how society cares for its elders not only during disasters, but daily.

"We live in an aging society and in a way we are victims of our own success," he said. "Europe has the same problem. Also Japan and Korea. People are living decades longer because of medical science, but we don't know how to care for them."