‘The best DIY SOS: The Big Build ever!’ Viewers ‘sob’ as disabled mother with rare connective tissue disorder who was ‘trapped’ in her bedroom is given a fully accessible house in incredible makeover

Viewers of DIY SOS: The Big Build were left sobbing last night after a disabled mother-of-two trapped in her bedroom was given a fully accessible house in an incredible home makeover.

However the mother-of-two, who uses a wheelchair, was left stuck in her bedroom because she can’t move freely around the house and said her life had become ‘a nightmare.’

Nick Knowles and his team of builders transformed the home in just nine days, widening corridors and installing a lift in order to make the property accessible for Mandy and her family.

The family-of-four were left overwhelmed by the renovation, with Mandy saying it  would ‘change everything’, explaining: ‘To be able to get into my house, move around my house, and be around the rest of the family. To be a mother and wife again…is amazing.’

Many of those watching the programme were left in hysterics over the transformation, with one saying: ‘DIY SOS Northern Ireland style! The best build so far! Proud as punch.’ 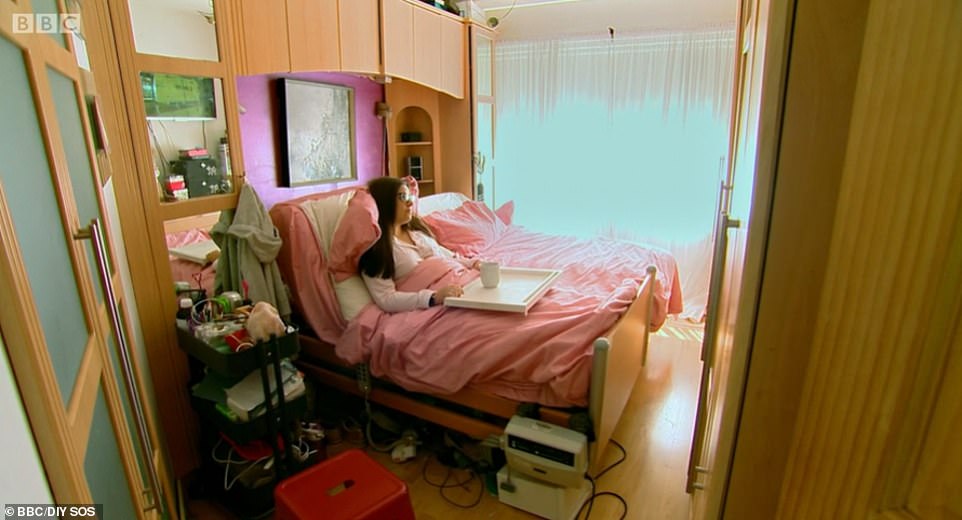 Viewers of DIY SOS: The Big Build were left sobbing last night after disabled mother-of-two Mandy McCreight, from Bangor, trapped in her bedroom was set free by an incredible home transformation (pictured, her bedroom before) 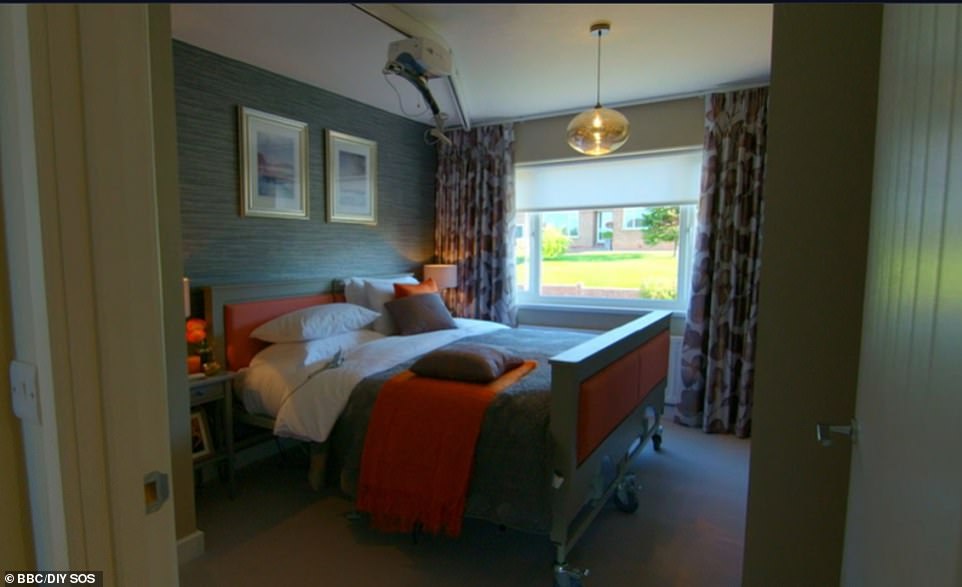 Nick Knowles and his team of builders transformed the home in just nine days, widening corridors and installing a lift in order to make the property accessible for Mandy and her family (pictured, the master bedroom after its transformation)

‘One of the best builds yet,’ another commented. ‘Nick Knowles, what you and the guys do for families is just amazing.’

While Mandy suffers from the debilitating condition, her husband Davy, 59, also has health complications including a back injury, while Ben, 18, has complex learning difficulties.

Mandy first suffered symptoms in 2002, when she was pregnant with Ben, but said things ‘changed dramatically overnight’ during her second pregnancy with daughter Kara, 15.

She was dealing with crippling pain and chronic fatigue, explaining: ‘I was told this was normal and it would get better after she was born. 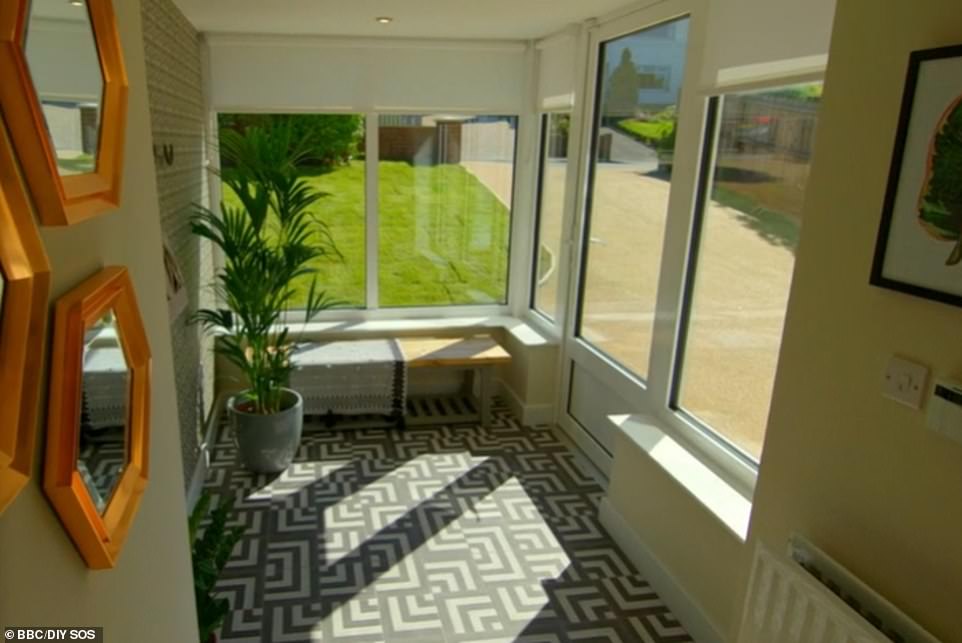 Nick and his team transformed the property in order for it to become more wheelchair accessible for Mandy, including widening hallways and doorframes 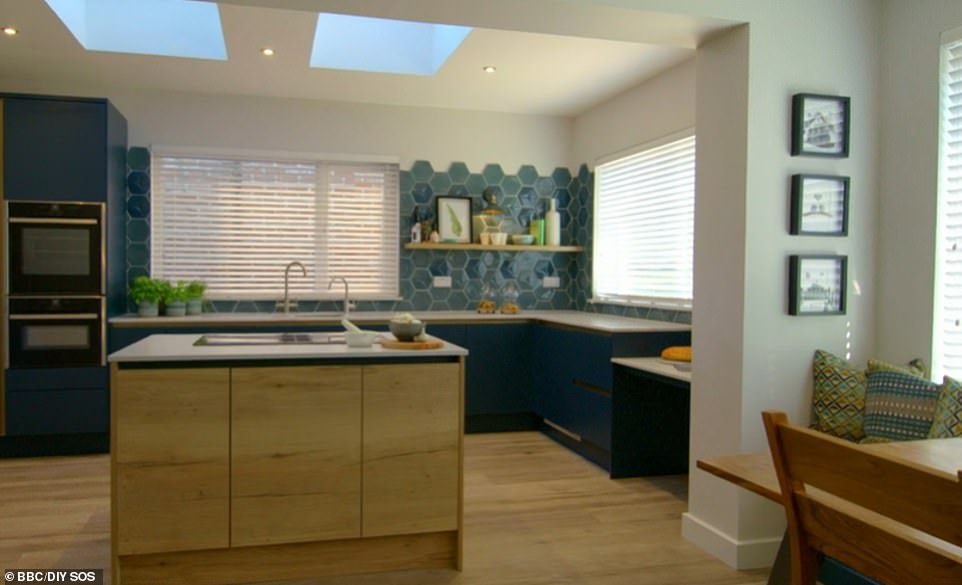 The team ripped out the old garage and built a state of the art kitchen into the area, with extra-wide spacing and a lower workspace for Mandy to join the family when cooking 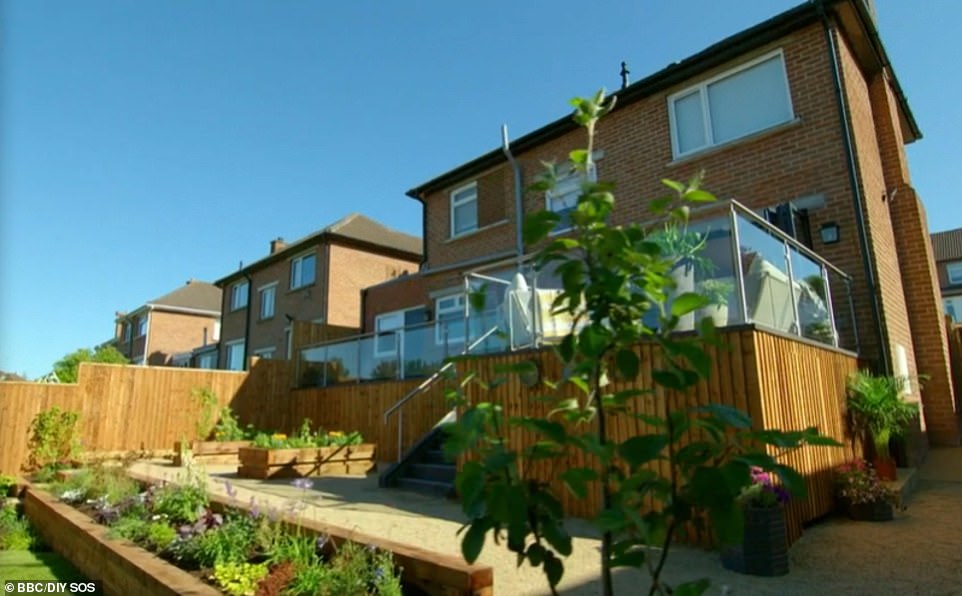 Meanwhile the back of the property was also transformed, with the team removing old shrublands and weeds to create a space for the whole family to relax

WHAT IS EHLERS-DANLOS SYNDROME?

Ehlers-Danlos syndrome (EDS) is the name for a group of rare inherited conditions that affect connective tissue.

Symptoms can range from immobility to hypermobility, an increased amount of movement in joints, as well as fragile skin, frequent dislocation of joints, digestive problems and heart problems.

The different types of EDS are caused by faults in certain genes that make connective tissue weaker.

EDS can affect people in different ways. For some the condition is relatively mild, while for others their symptoms can be disabling. Some of the rare severe types can be life-threatening.

‘I believed that. But I couldn’t even push her pram. I knew then, it was unlikely I would get better.

‘It’s difficult enough to be a parent but when you’re physically unable to care for them, it’s a nightmare.’

She said her ‘biggest fear’ was that she could spend the rest of her life ‘stuck in the bedroom’ and compared her husband to ‘a single dad’.

The mother-of-two emotionally added: ‘I cannot be a mum in a different room from my family.’ 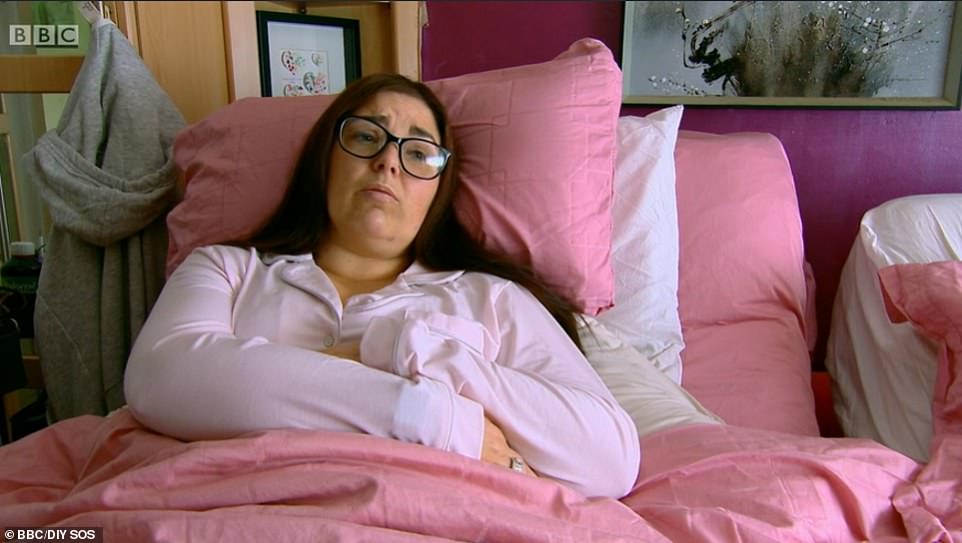 Mandy left viewers in tears after she described her struggles to be a present mother for her family, and said she felt completely confinded to her bedroom 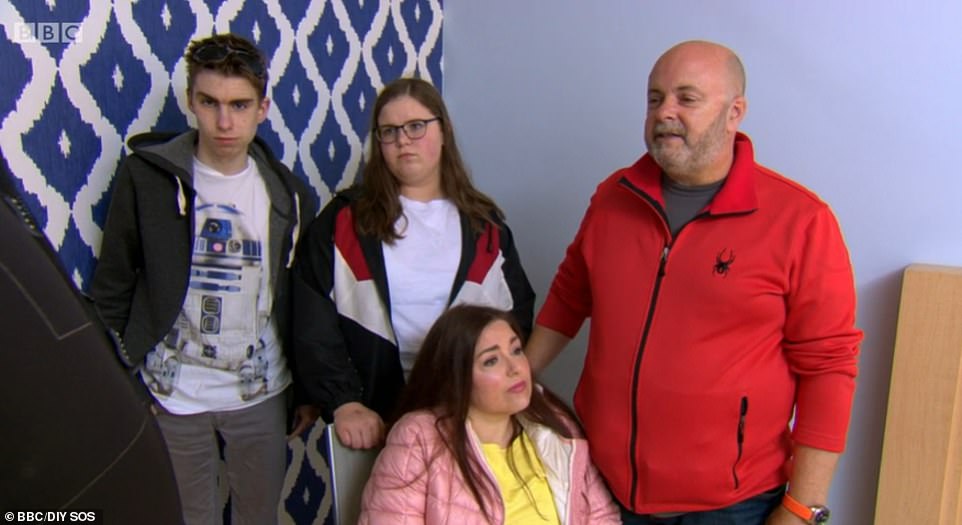 The mother-of-two said her husband was ‘like a single father’ to the couple’s children Ben, 18, and Kara, 15 (pictured, the famil together ahead of the renovation)

Meanwhile Ben and Kara have both inherited her Ehlers-Danlos Syndrome, and Mandy said she is terrified they too could need wheelchairs one day.

Mandy explained: ‘It was a shock. Somebody asked me, ‘Will Kara be in a wheelchair like you one day?’ and I said I hope and pray the answer is no, but with our medical condition I can’t honestly say that she won’t be.’

Despite her can-do attitude, Mandy struggled to move around the family home, with her wheelchair being too wide to get through doorways and too heavy to be carried upstairs.

She said her condition has meant she has been unable to be the mother she hoped she could be and called the condition ‘very lonely and isolating.’ 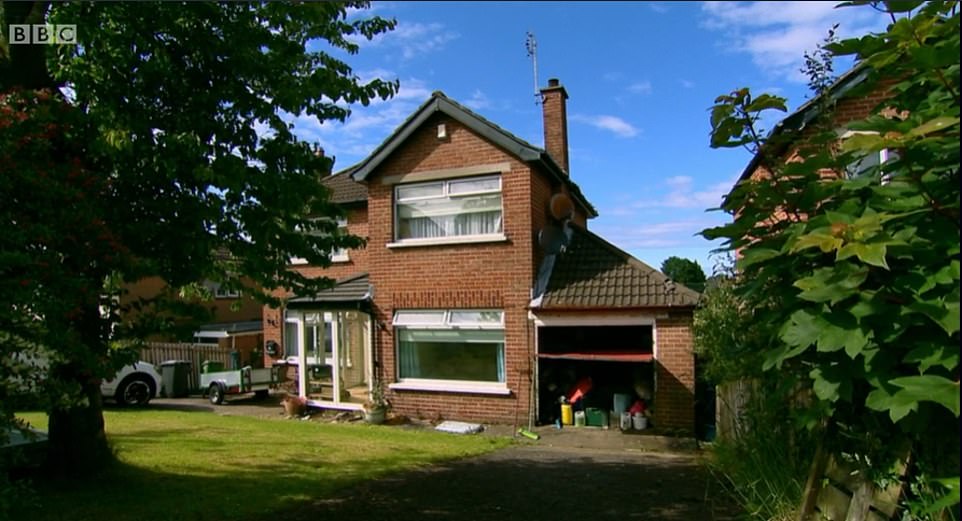 Nick Knowles and his DIY SOS team visited the family in Bangor, Co Down, to help transform their home and improve their quality of life (pictured, the outside of the property before the renovation)

Nick and his DIY SOS team were able to reconfigure the house to have appropriate bedrooms, a wet room and direct access for carers. Doors were widened and a lift installed to the first floor.

The team also provided special access to the garden to give Mandy independence.

However half way through the build, Mandy suffered an attack of particularly bad EDS symptoms and was rushed to hospital.

Speaking to Nick in hospital, she said she feared she would ‘have to go into a nursing home at some stage’ and said it would have been ‘heartbreaking.’ 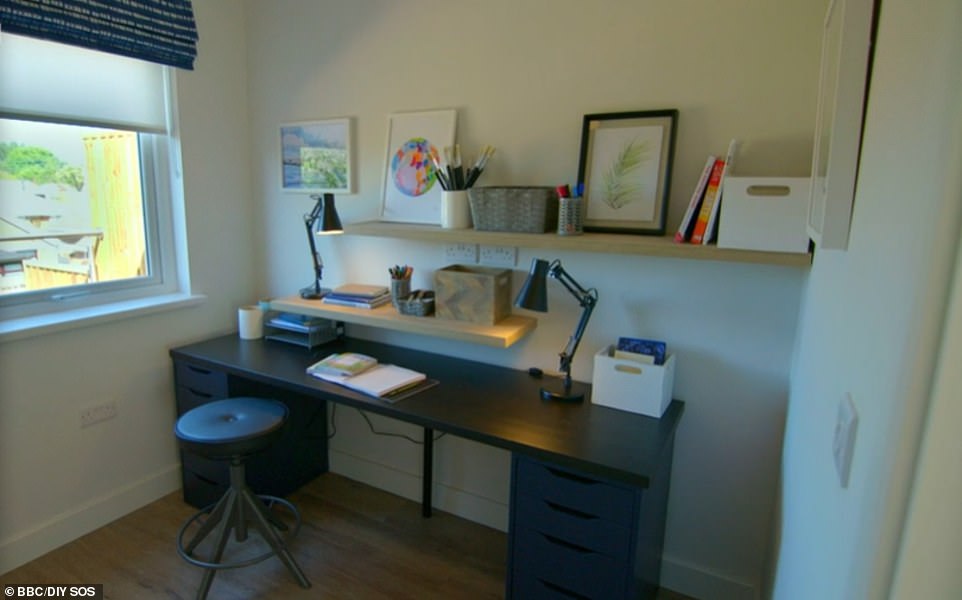 The team cleverly designed areas that were wheelchair accessible for Mandy throughout the home, including a craft area where she could paint with her daughter Kara

Meanwhile the mother-of-two confessed she ‘couldn’t wait’ to ‘be a mum again’ in her new home.

Compassion for the family bought the community together on the build, and they worked quickly to complete the project in less than two weeks.

The porch and front door were transformed to create a stylish and seamless reception area.

Meanwhile the old garage was turned into a bespoke kitchen diner, with lower work surfaces to help Mandy get back into cooking again. 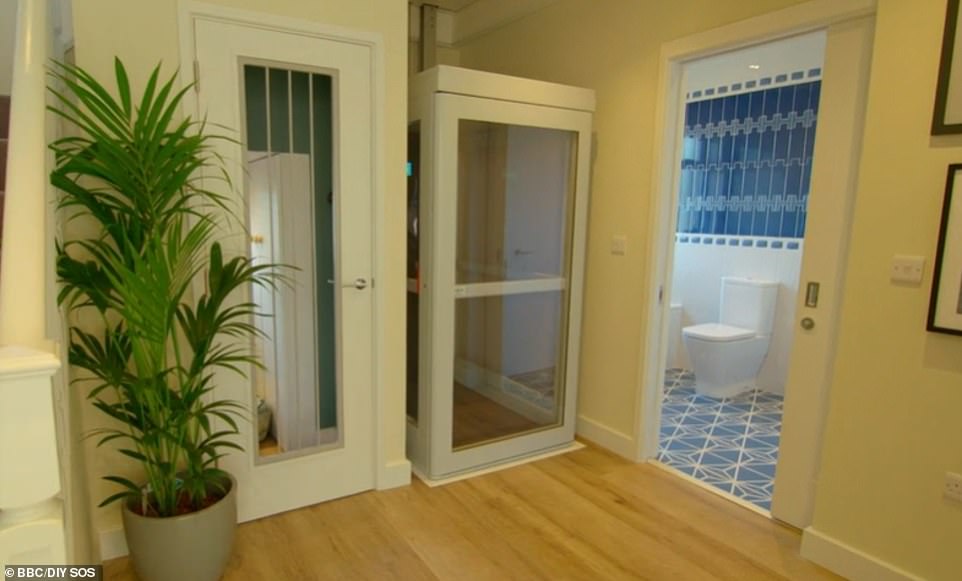 Meanwhile the state-of-the-art lift transformed the centre of the home for the couple, allowing Mandy to travel independently between floors

Next door, in the former utility room, the team built a craft space for Kara where Mandy could join her in painting.

The life changing lift would provide Mandy with the independence she craves to access her children’s bedrooms, which have also been renovated in a contemporary style.

The master bedroom has been decked out into a stunning modern room, with a specially adapted bed and a hoist to take the strain off Davy.

Meanwhile the overgrown garden has been levelled out to allow Mandy to spend time  with her children outside without leaving the house. 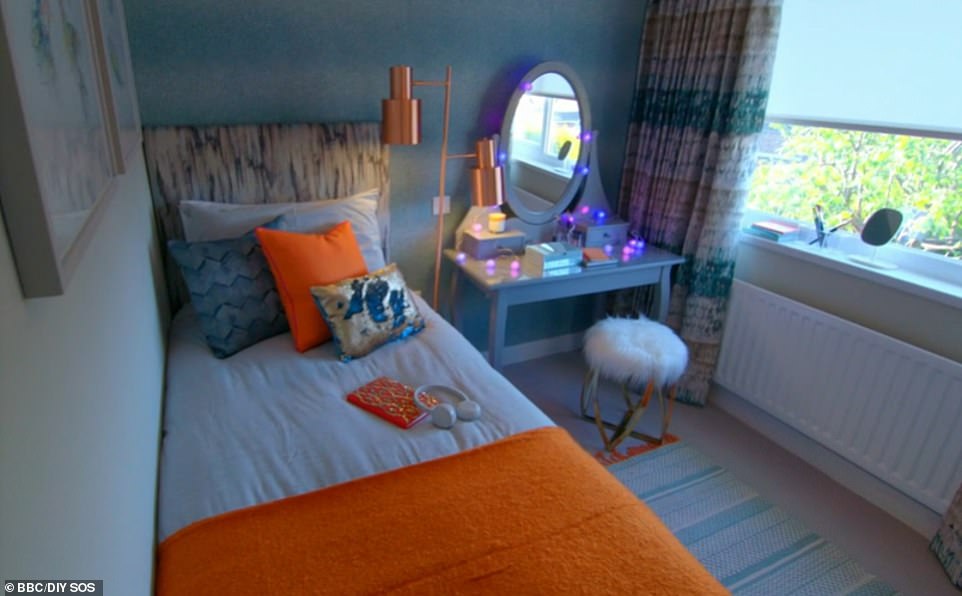 The parents were most emotional after seeing daughter Kara’s bedroom transformed into a trendy space for the young teenager, who has the same condition as her mother

The mother-of-two was left in hysterics as the home was revealed, saying: ‘It’s amazing. It’s absolutely amazing. Stunning.’

She broke down when she saw her daughter Kara’s room, explaining: ‘This is the one room I wanted to be special. On the bad days I wanted her to have somewhere really special, somewhere that would make those days easier.’

Many of those watching called it ‘the best episode of DIY SOS ever’, with one saying: ‘Bring a box of tissues #DIYSOS.’

Another wrote: ‘That was the best DIYSOS I’ve seen. Absolutely bloody awesome.’

A third added: ‘Urgh crying at DIYSOS and I don’t care a bit. The family’s reaction tonight during and after the reveal was everything.’ 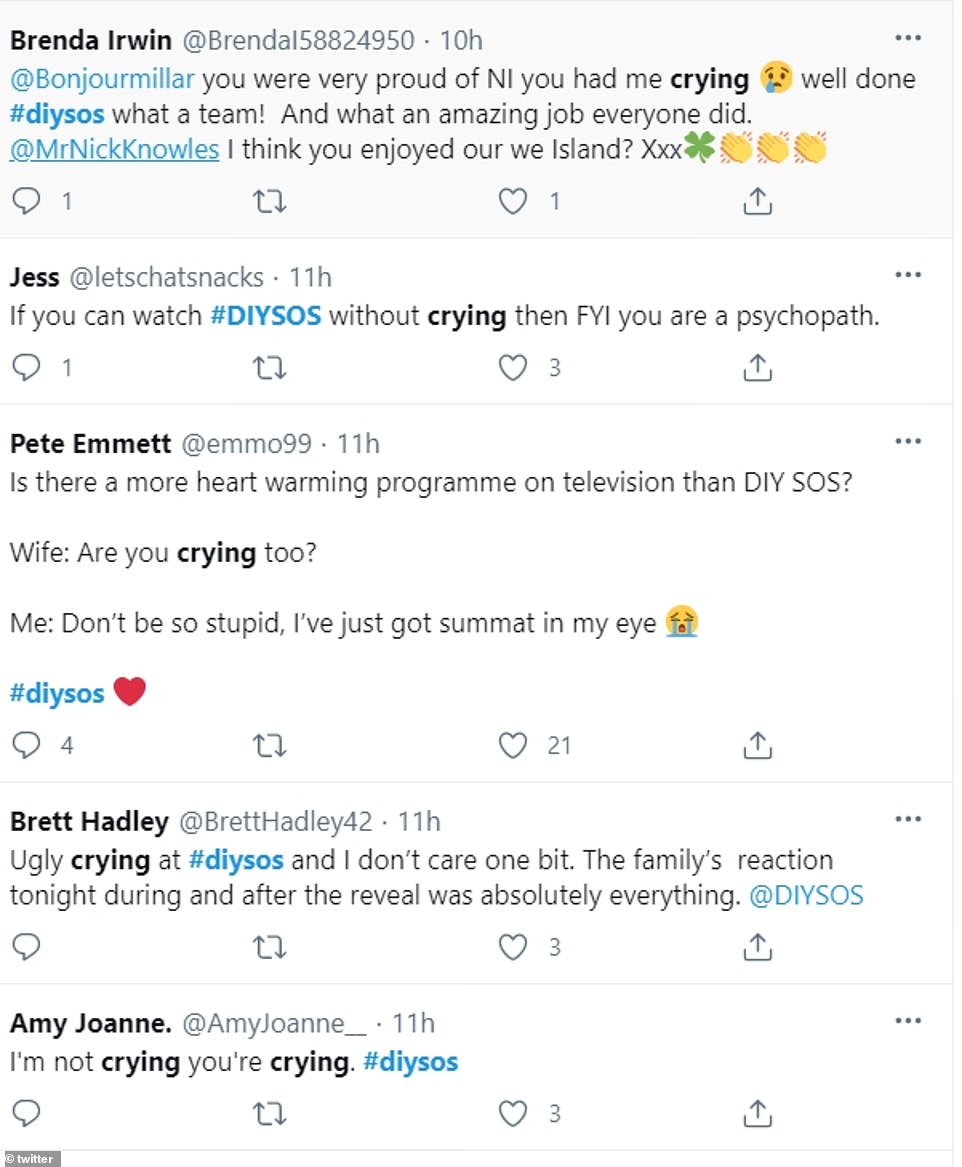 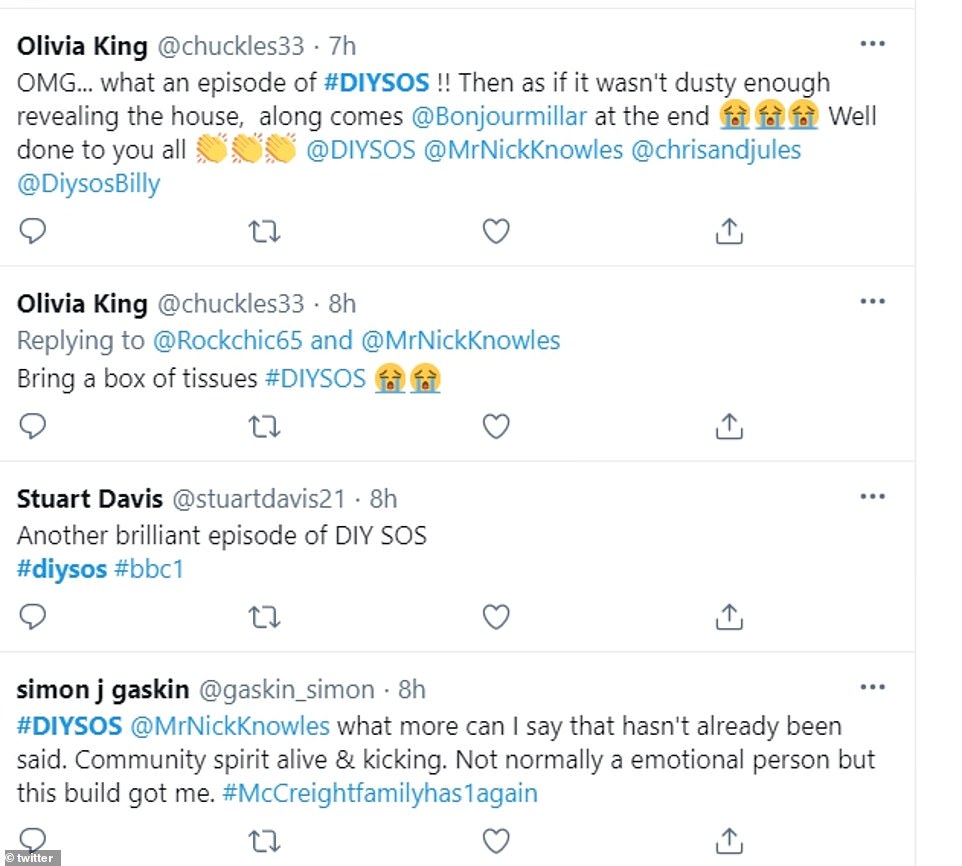 Many of those watching were left emotional over the incredible build, with some saying it was the best episode of DIY SOS they’d ever seen