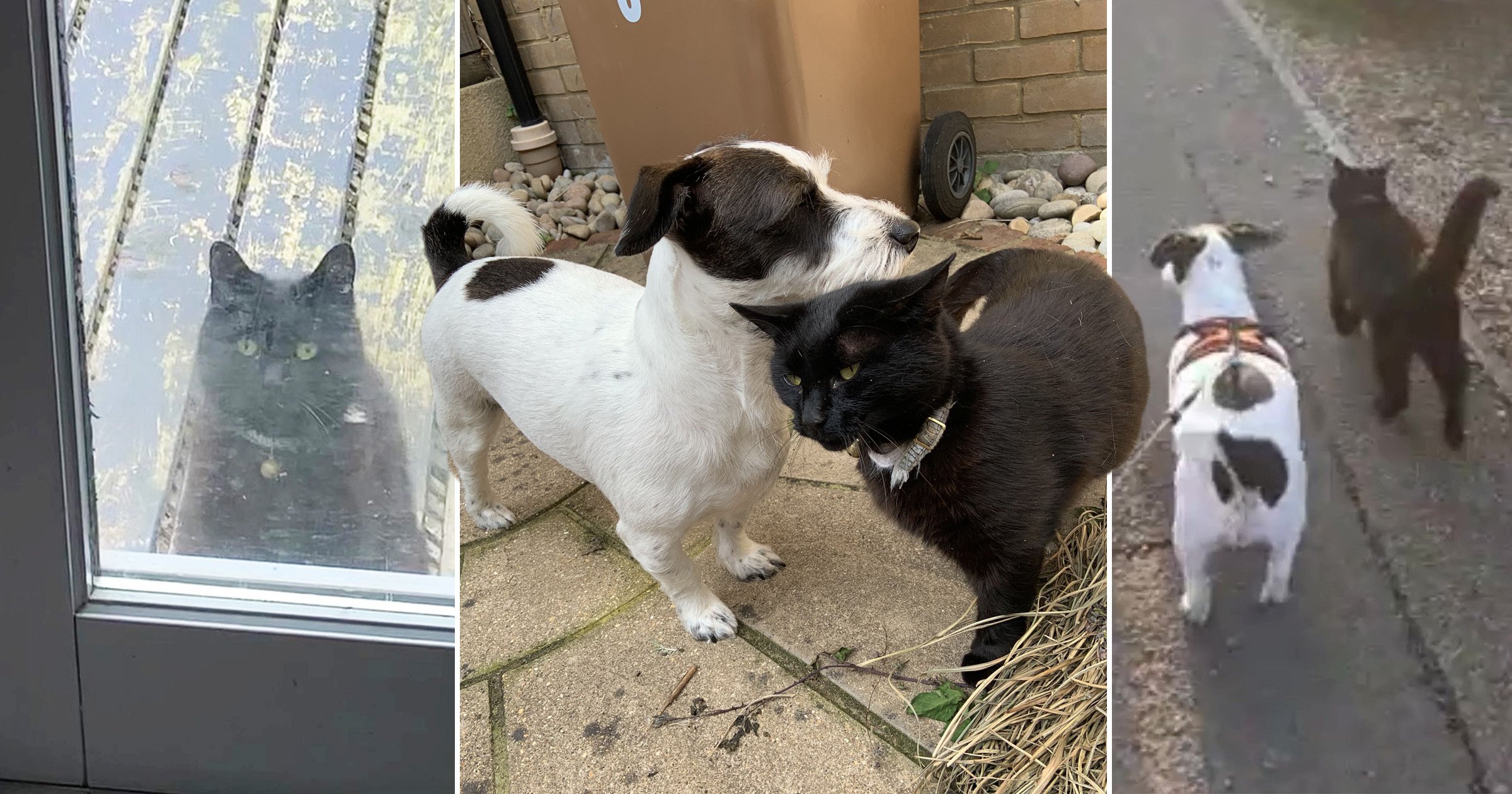 A dog has made as ‘inseparable’ best friend – a local black cat who waits in the garden and waits for her buddy to come and hang out.

When Sarah Hunt started taking then-puppy Benji – a Jack Russell, springer cross – for walks near her home in March, Cambridgeshire, 20 months ago, she noticed they had a cute little shadow following them around.

The 35-year-old says the cat – who they refer to as ‘Black Cat’ and appears to arrive from a nearby house – is in her garden every morning to do her ‘daily yoga’ stretches with Benji and will follow her and her dog on their walks into town for 20 minutes.

Sarah says: ‘They’ve been friends ever since we took Benji for his first walk at four months old. At first, she would follow us but only from a distance.

‘She would follow for the whole walk, even if we walked into March itself, which is 20 minutes away. Initially, we thought she was interested in us, not our dog.

‘Then we started to let him out in our garden, and she would jump off the fence and start playing with him. They run around and stroke each other. That’s when we realised she was interested in Benji.

‘He really loved the attention, and they’ve been inseparable ever since. She’s in our garden every day.

‘They’ve become closer and closer with each passing day. Some days she’ll stay in the garden all day.

‘She will always call around every morning because he will go out to meet her and they do stretches together. I joke it’s their daily yoga.

‘Then she will normally see him on his afternoon walk but if she doesn’t catch him, she will come into the garden in the evening to get her fix of Benji.’

Music producer Sarah previously worried that her new pup wouldn’t take kindly to a cat in the family, as Benji’s parents didn’t like felines.

Sarah said: ‘We just find it so funny. The reason we almost didn’t buy Benji was because both of his parents really didn’t like cats, and we were worried he wouldn’t get on with Marley.

‘But it turns out he absolutely loves cats, especially this one. Because we’ve got Marley, cats are always around the house and they all get on with him but none as much as Black Cat.

‘We’re trying so badly to find the cat’s owner to let them know about their friendship. Her collar and tag are really worn so we don’t even know her name.

‘All of our neighbours have only ever seen her outside so we don’t actually know where she comes from.

‘We just call her Black Cat for now. Benji recognises that name perfectly though. Whenever we mention her name, his ears prick up and he looks for her.

‘We sometimes leave treats and food out for her but we don’t do it every day because if she does have a home, we don’t want her to leave that family.

‘If it turns out she is a stray, we would love to adopt her into our house.’

Benji and Black Cat’s bond has made them a hit on social media, with some videos of the pair being watched more than 400,000 times.

One commenter said: ‘This friendship is so precious.’

Another person wrote: ‘Hope the cat’s parents know they can never move.’

In response, Sarah said: ‘I never expected their relationship to be something so many people are interested in. It’s been so nice to see people’s reactions to them.

‘It’s been beautiful to see all the love Benji and Black Cat get. Which is why I’d really love to tell her owner about the following they’ve got.

‘People have even been asking me to set up a wish list so they can send gifts to them both.’