DOGECOIN has soared by 91% in value over the past 24 hours, but analysts are warning the "bubble has to burst".

The cryptocurrency, which was invented as a joke, currently has a market value of more than £24.4billion ($33.6billion). 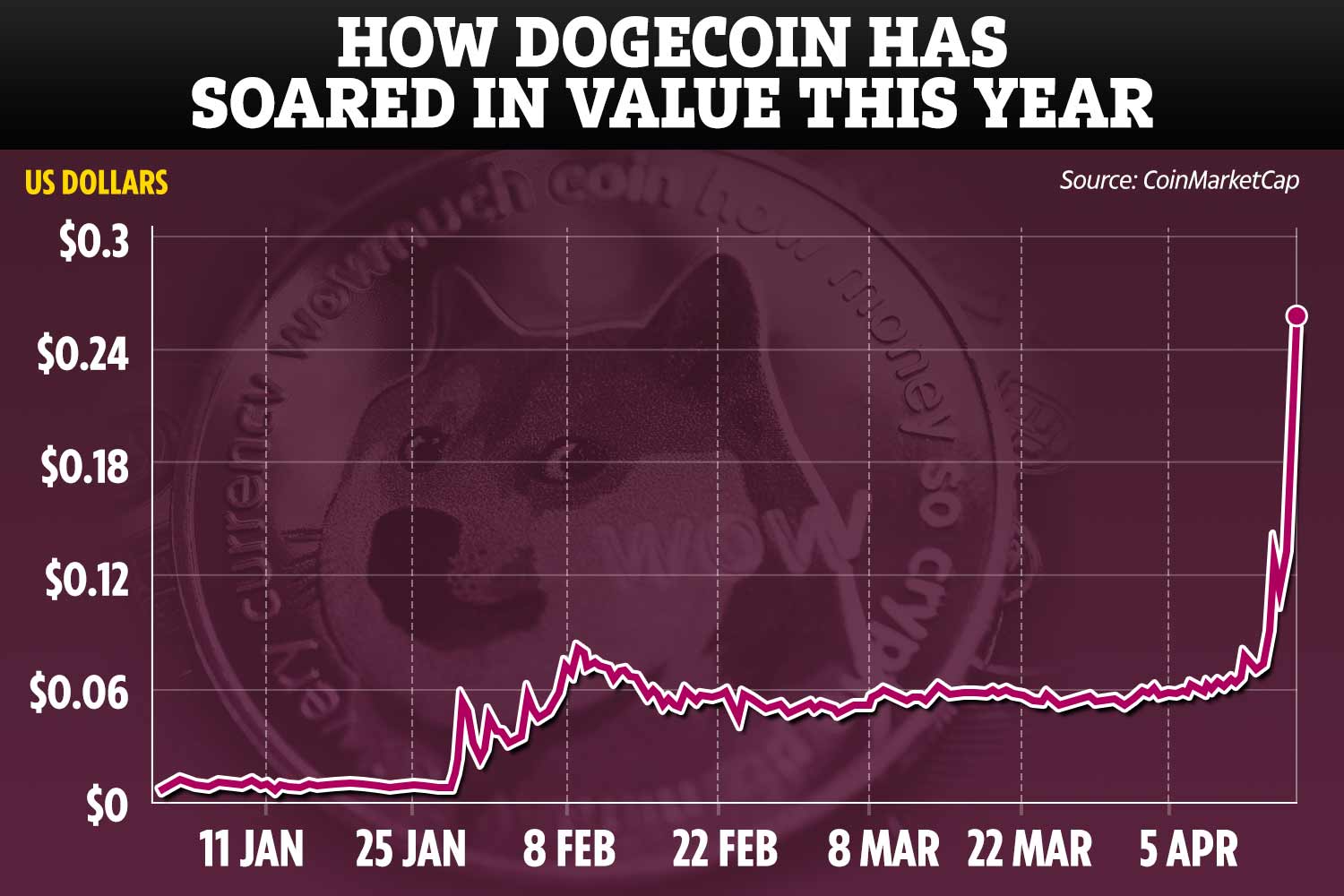 In comparison, it had a market value of £5.4billion ($7.5billion) a month ago on March 16, according to CoinMarketCap.

The rise comes after cryptocurrency exchange platform Coinbase went public in the US on Wednesday, with shares rocketing by 71% on its debut.

Bitcoin has also soared in value recently, hitting an all-time high for the second day in a row on the same day.

Investors have "jumped on the bandwagon", according to experts, in spite of the risks that come with buying cryptocurrencies.

DOGECOIN is a cryptocurrency which was launched in 2013.

Originally invented as a joke by software engineers Jackson Palmer and Billy Markus, the Dogecoin has the image of a Shuba Inu dog as its logo.

It has been marketed as the "fun" version of bitcoin.

Two weeks after its launch, the value of it jumped 300% after China banned banks from investing in cryptocurrencies, according to Investopedia.

Dogecoin then skyrocketed alongside other cryptos during the bubble that peaked in 2017, and it fell with the rest of them over 2018.

In recent days, its value has benefited by backing from celebrities including Elon Musk and Snoop Dog.

Investing is not a guaranteed way to make money, so you should be able to afford to lose the money.

Cryptocurrencies are also highly volatile, so your cash can go down as well as up in the blink of an eye.

David Kimberley, an analyst at investment platform Freetrade, told The Express: "Dogecoin’s rise is a classic example of greater fool theory at play.

"People are buying the cryptocurrency, not because they think it has any meaningful value, but because they hope others will pile in, push the price up and then they can sell off and make a quick buck.

"But when everyone is doing this, the bubble eventually has to burst and you’re going to be left short-changed if you don’t get out in time.

"And it’s almost impossible to say when that’s going to happen."

Meanwhile, the Financial Conduct Authority in January warned that Brits risk losing ALL of their money if they invest in cryptocurrencies.

The financial regulator said people need to be aware of the risks, ranging from prices going up and down suddenly, to the lack of protection if something goes wrong.

It comes after a ban on some crypto-related investment products.

THE Financial Conduct Authority (FCA) which creates the rules for the banking industry has warned people about the risks of investing in cryptocurrencies.

Bitcoin broke through the $20,000 price mark for the first time in December.

Meanwhile, an advert for a bitcoin exchange Coinfloor was banned last month for telling savers cryptocurrencies are a safe investment.

People considering investing in Bitcoin or shares and stocks have also been warned over "risky" tips being shared on TikTok.