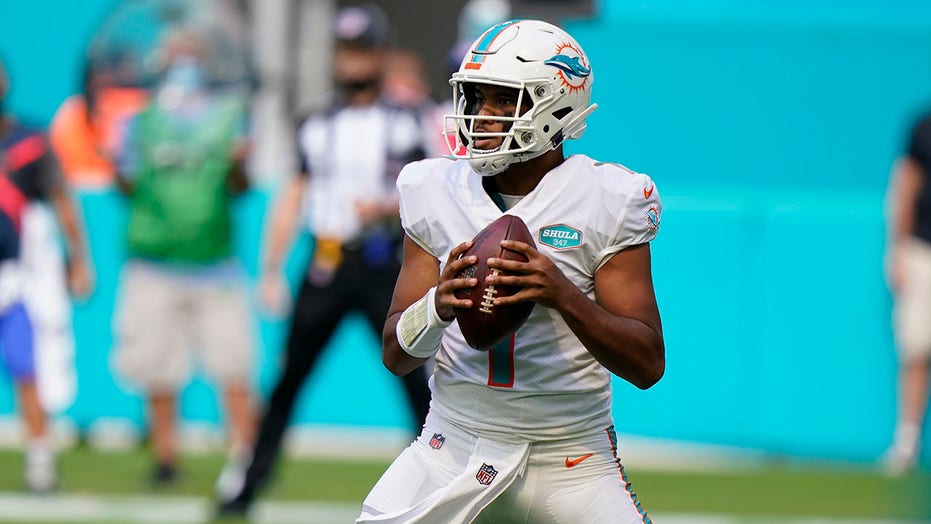 Tua Tagovailoa got his “welcome to NFL” moment early in his game against the Los Angeles Rams on Sunday.

The former Alabama standout was making the first start of his career for the Miami Dolphins. He was in the pocket trying to make a throw when he was strip-sacked by Aaron Donald.

ODELL BECKHAM JR. MAY HAVE PLAYED HIS LAST GAME WITH THE BROWNS, NFL INSIDER SAYS

Donald, the menacing defensive tackle, was able to strongarm his way through Dolphins offensive lineman Ereck Flowers and get his hand on the ball before Tagovailoa was able to throw it.

The fumble led to a Rams touchdown on Los Angeles’ next drive.

Jared Goff and his offense would only need three plays to get across the end zone. He handed the ball off twice to Darrell Henderson and then called a jet sweep in which Robert Woods got the ball and ran it in for a touchdown of his own.

Tagovailoa made his way into Hard Rock Stadium wearing a Hawaiian shirt, paying homage to his heritage.

Former Dolphins coach and NFL on FOX analyst Jimmy Johnson said on the pregame show he was surprised to see so much excitement in Miami around Tagovailoa.

“I’ve never seen this kind of excitement. You got to understand, the Dolphins have had a long dry spell. The last coach to win a playoff game? Dave Wannstedt 20 years ago,” Johnson said, adding that offensive coordinator Chan Gailey knows Ryan Fitzpatrick can be a streaky player at times and it would make sense for Tagovailoa to go in now.