In a major breakthrough, the discovery of 59 ancient coffins was announced by the Egyptian government in the vast burial ground of Saqqara, south of Cairo. Opening one of the ornately decorated sarcophagi, the team revealed mummified remains wrapped in burial cloth that bore hieroglyphic inscriptions in bright colours. And scores more may still lie buried there, Tourism and Antiquities Minister Khaled al-Anani said at the site which is near the 4,700-year-old pyramid of Djoser.

They provide a unique insight into the ancient civilisation, who were obsessed with the afterlife.

Egyptian religious doctrines included three ideologies on what happened after death – the belief in an underworld, eternal life, and rebirth of the soul.

The underworld, also known as the Duat, had only one entrance that could be reached by travelling through the tomb of the deceased.

And an incredible find exposes this mystical road map. 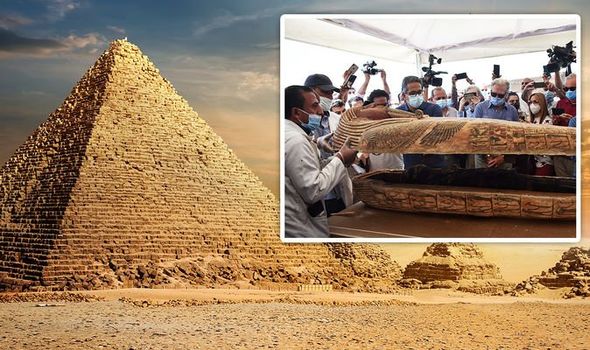 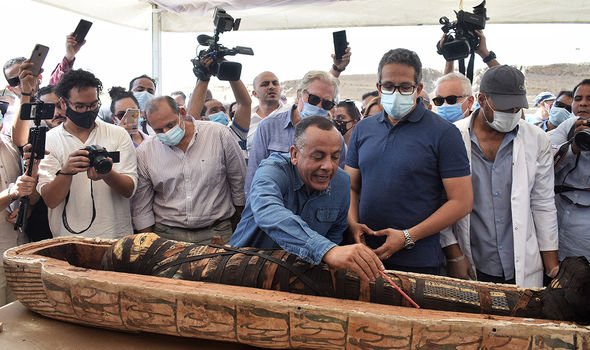 The ‘Book of Two Ways,’ a precursor to the Egyptian funerary texts known as the ‘Book of the Dead,’ depicted two paths by which the soul could navigate the spiritual obstacle to reach the realm of Osiris, the god of death.

And archaeologists unearthed a 4,000-year-old-copy of this text, making it possibly the oldest version ever found.

The find, described in the Journal of Egyptian Archaeology, traces this belief back further than previously thought.

Rita Lucarelli, an Egyptology curator at the University of California, said in 2019: “The ancient Egyptians were obsessed with life in all its forms.

“Death for them was a new life.” 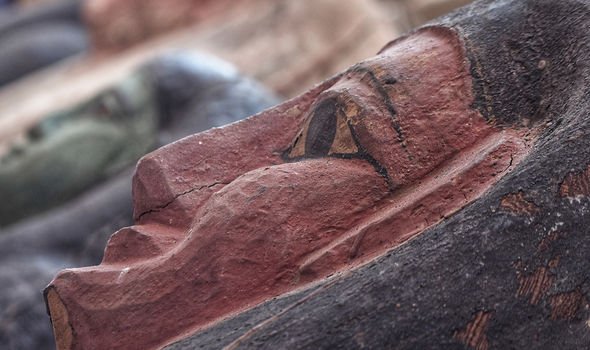 The discovery of the oldest known copy unseats the previous record-holder by about 40 years.

Found during excavations of a burial shaft in the Egyptian village of Dayr al-Barsha, the text was found in a coffin that had largely escaped the attention of both grave robbers and archaeologists.

Unlike the bound books of modern times, the ancient text was scrawled across the inside of the sarcophagus itself.

Experts said the inscriptions clearly quote the ‘Book of Two Ways’, and other artefacts in the grave have been dated to the reign of Pharaoh Mentuhotep II, who ruled until 2010BC.

Study author Dr Harco Willems, an Egyptologist at the University of Leuven in Belgium, said the “coffin texts” were meant to “situate the deceased in the world of the gods”. 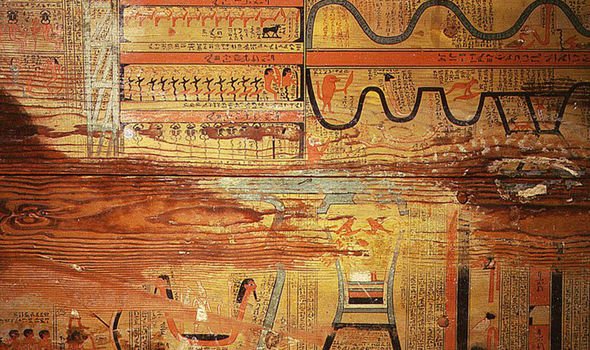 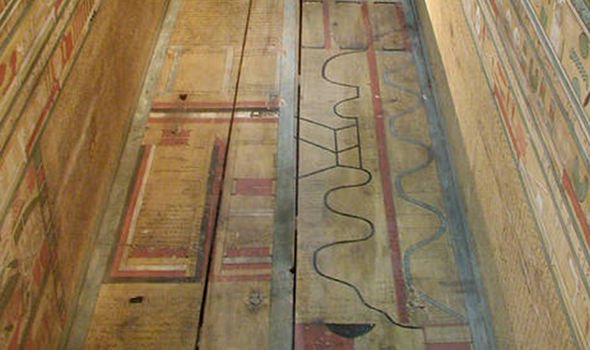 He added: “The funny thing is the whole idea of how you survive in the netherworld is expressed in male terms.”

Since some of the planks were etched with the name Djehutynakht, Dr Willems assumed the coffin had contained the governor’s body.

But closer inspection revealed that its occupant was a woman named ‘Ankh,’ who appeared to have been related to an elite official.

And the bones found in the shaft may be hers, even though the Book refers to Ankh as a male.

Kara Cooney, an expert on Egyptian art and architecture at the University of California explained that ancient Egyptian rebirth was linked with male gods, and so women would have to adapt to be more like Osiris in the afterlife.

Each individual’s “book” differed in length and lavishness depending on its owner’s wealth or status.

Dr Willems added: “This one begins with a text encircled by a red line designated as the ‘ring of fire’.

“The text is about the Sun god passing this protective fiery ring to reach Osiris.”

Gates feature prominently, as do two looping lines indicating the separate roads to the afterlife, surrounded by malignant spirits and other supernatural beings.

The final image shows a ship dragged on a sledge and follows the final text “Spell 1130”.

This is said to attach the mummy’s identity forever to the Sun god, Ra, the creator.

Assuming Ankh casts her spells properly, she would have become a god for eternity.