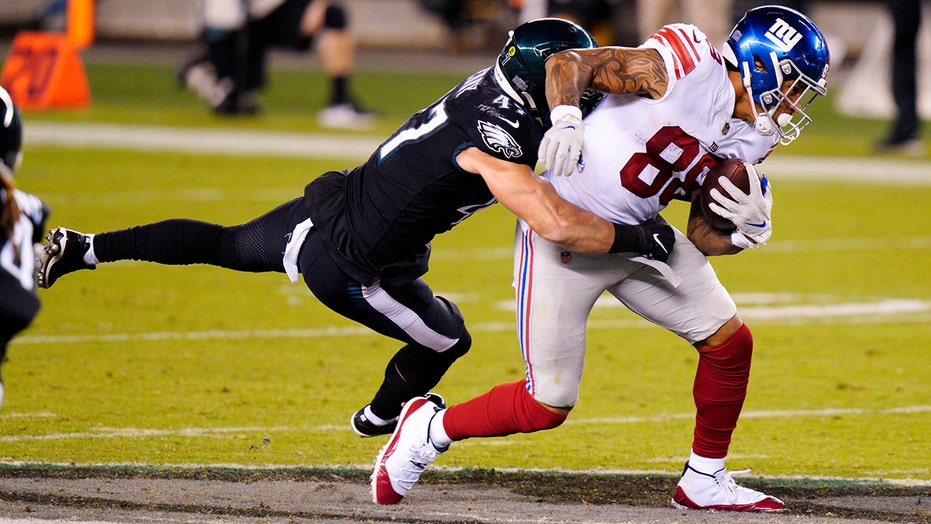 Evan Engram dropped a key pass on 3rd down with 2:14 remaining in the fourth quarter, which forced the New York Giants to punt the ball away and gave the Philadelphia Eagles the opportunity to score the go-ahead touchdown with 40 seconds.

While bonehead penalties were plentiful for the Giants late in the game, including a 15-yard lowering the head to tackle penalty called on Corey Ballentine for his tackle on Desean Jackson, the Engram dropped pass is going to be the pinpoint when fans look back on the game.

“Obviously, it sucked not making that play,” Engram responded when asked about his mindset on the pivotal play. “The defense was out on the field. Whether they got the stop or the Eagles scored, we were going to get the ball back. So I was staying in the game, being ready for whatever. But, obviously, it’s frustrating, it’s not a good feeling not making that play and possibly putting the game on ice.”

Engram also had a ball that bounced off his hand that led to a Giants turnover.

“It’s tough, you know. Don’t want to be on the short end of a turnover. I got to be better with mechanics and small things. It sucks. It’s a sucky feeling right now, just got to get back to work and correct the mistakes,” Engram said.

“I thought he made a lot of plays to keep us in the game and bring us back when we were down and struggling on offense. He had a lot of production for us tonight. We’ll keep on playing with him; he’s a guy that we have to keep involved in our offense and keep giving targets like we did tonight. He’s definitely a guy that helped us. Obviously, we’ll look at the tape and make any corrections possible, but we all have to do a better job coaching and playing. We have to make more plays and keep putting them in a position to be successful,” he said.

Engram finished with six catches for 46 yards and also had three rushing yards.

New York blew a 12-point lead with about 6 minutes left, giving the Eagles the victory.