Sacked Casey councillor Sam Aziz has admitted misleading the state's anti-corruption commission over how much money he gave to allegedly corrupt developer John Woodman as part of an "investment" that paid him hundreds of thousands of dollars.

The ex-mayor of Casey Council has also described handing a suitcase filled with $600,000 in cash to Mr Woodman in return for payments totalling hundreds of thousands of dollars more over the next year. 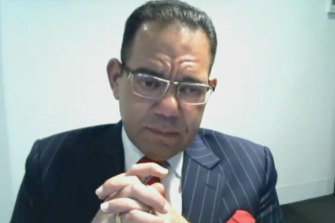 "I took a suitcase that I use for travelling because that was the only thing that I could think of that could contain that much cash. I took it to the bank manager and said 'Can you please, once the money is counted, put it in here'," Mr Aziz told the Independent Broad-based Anti-corruption Commission hearing on Monday.

IBAC is investigating alleged bribes paid to Mr Aziz and another councillor by Mr Woodman, in return for favourable planning decisions for both Mr Woodman, his relatives and his clients.

Last year under private examination Mr Aziz told the anti-corruption commission he gave Mr Woodman $370,000 in 2018, in return for him paying him an investment return over the course of a year.

But on Monday he agreed with IBAC's counsel assisting, Michael Tovey, QC, that he had in fact handed Mr Woodman $600,000 in cash, in a meeting at a restaurant at the Sandhurst golf club. 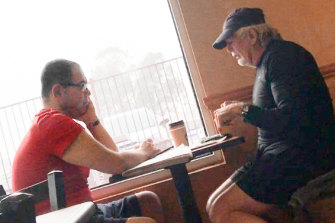 An IBAC surveillance photo of Sam Aziz (left) meeting developer John Woodman at a Subway restaurant in the suburb of Skye, in April 2018.Credit:IBAC

Lying to IBAC carries with it serious penalties, including jail time.

Last year forensic accountants for IBAC established that Mr Aziz had in total received close to $900,000 in payments from Mr Woodman in the year after handing him the $600,000 in cash.

IBAC is investigating the outsized influence of Mr Woodman both at Casey Council and within successive state governments, as a result of hundreds of thousands of dollars in donations to the election campaigns of Labor and Liberal candidates.

The Andrews government – which includes MPs that took campaign donations from Mr Woodman – sacked Casey Council earlier this year over the allegations.

Mr Woodman allegedly bribed select Casey councillors for years and showered councillors and state political candidates with donations in his bid to win planning approvals worth hundreds of millions of dollars for his developer clients and himself.

Mr Tovey said for this $600,000 payment to Mr Woodman, a sizeable sum was repaid to Mr Aziz.

"Over the period of the next 12 months you had repaid to you an amount of cash $150,000 which you call interest plus another $660,000," Mr Tovey told Mr Aziz, who did not dispute the total but said it was an "absolutely unfair" way to describe the motivations behind the payments. 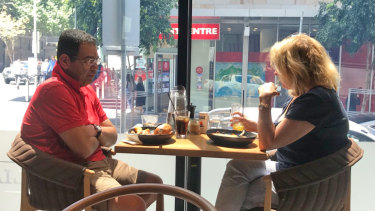 Surveillance photo of councillor Sam Aziz meeting former Liberal Party MP Lorraine Wreford in a city cafe so she could give him cash. Credit:IBAC

Mr Aziz said among the hundreds of thousands of dollars in payments from Mr Woodman, some were done via electronic transfer and others came as cash payments – delivered by former Liberal Party MP Lorraine Wreford.

"She presented herself – and I don’t mean this in a mean [way] – almost as a gopher for John Woodman," Mr Aziz said.

In evidence given in IBAC hearings last year, Ms Wreford said the payments to Mr Aziz were bribes.

When Mr Tovey asked Ms Wreford what the payments were for, she said: "It was [for] making decisions or trying to get favourable decisions for planning outcomes at Casey."

Under questioning, Ms Wreford agreed that the payments to Cr Aziz were "bribes" to gain favourable decisions.

Mr Aziz left Australia for Egypt last year, soon after the anti-corruption commission raided his home as part of its investigation. He returned from Egypt in August, and on Monday took the stand at IBAC to explain his role in taking payments from Mr Woodman without ever having declared them.

Mr Aziz claimed he had told IBAC he had paid $370,000 rather than the actual $600,000 because of a complicated divorce settlement with his former wife during which he was "stressed and unaware of decisions to take next" in dealing with money.

"That explanation is completely irreconcilable with the evidence you actually gave," Mr Redlich told Mr Aziz. He later told Mr Aziz's lawyer that the ex-mayor's "evidence is totally at odds with what he told the commission last year".

Mr Aziz was taped last November, after IBAC hearings had begun, calling a friend, Onorato Grossi, and checking he had WhatsApp on his phone so that they could talk without surveillance by the corruption commission.