Facebook finally brings its dating service to the UK and Europe

Great timing! Facebook finally rolls out its ‘Dating’ platform to locked-down singles in Europe — eight months after its planned release on Valentine’s Day

Facebook has finally brought its dating service to the UK and Europe following an eight-month delay due to a block from the European data regulator.

The feature lets users indicate their interest in potential matches in the local area, send messages and go on ‘virtual dating’ video calls.

It also includes the Secret Crush tool, which lets users select up to nine of their existing Facebook friends that they’re interested in and matches them up if the feelings are reciprocated and both people have a dating profile on the app.

The service, which was launched in the US in September 2019, is rolling out to 32 European countries including the UK, Ireland, France and Germany.

Facebook Dating has finally rolled out for users in the UK and Europe. The app requires no swiping – users are given matches based in who’s in the local area and they can indicate interest by tapping the purple heart under a profile

The European Union’s General Data Protection Regulation (GDPR) is a data protection law that entered into force on May 25, 2018.

Under GDPR, companies are required to report data breaches within 72 hours, as well as to allow customers to export their data and delete it.

Part of the expanded rights of data subjects outlined by the GDPR is the right for data subjects to obtain from the data controller confirmation as to whether or not personal data concerning them is being processed, where and for what purpose.

Further, the controller must provide a copy of the personal data, free of charge, in an electronic format.

GDPR aims to strengthen and unify data protection for all individuals within the European Union (EU).

The law marks the biggest overhaul of personal data privacy rules since the birth of the internet.

It was initially due to be released in the UK on Valentine’s Day 2020, but it was delayed after a documentation timing issue with Facebook’s lead EU regulator, the Irish Data Protection Commission (DPC).

However, the eight-month delay may inadvertently boost user take-up numbers during the coronavirus lockdown, when potential couples are opting to meet and date digitally.

Facebook is hopeful that its online platform and ‘virtual dates’ will see it thrive in a locked-down Europe.

Following the launch delay, the social network said in a press briefing that Facebook Dating is GDPR compliant and played down any issues with DPC.

‘We wanted to take our time to get the product right,’ Kate Orseth, product manager at Facebook, told reporters.

More than 1.5 billion successful matches have been created in the 20 countries where the feature is already available, Facebook said.

‘We’re launching Facebook Dating in Europe to help more people find meaningful relationships through things they have in common, like interests, events and groups,’ the social network said in a blog post.

Facebook stressed that the feature, which is only for people aged 18 and over, is separate from the main Facebook app and that any Facebook user who wants to try it will have to opt-in.

Facebook users will also have to update the Facebook app on their phone or tablet to get the experience, which will be rolling out throughout today.

The social media giant hopes to emulate the success of apps such as Tinder, Hinge and Bumble, which have millions of users across their platforms.

However, unlike Tinder, which is known for swiping user profiles either left or right of the screen to indicate interest, Facebook Dating is ‘swipe free’.

Firstly, users need to build a profile, which automatically takes the first name and age from the main Facebook profile – two bits of information that can’t be changed on Dating.

Users can select their gender identity as simply male or female or ‘be more specific’ by selecting trans or non-binary identities from a list.

Once the profile has been completed, users can be matched up with people in their local area.

And once a suggested profile comes up, users can indicate their interest in that person by tapping the purple heart icon.

If two users indicate their interest in each other, users can start to chat in Facebook Dating’s messaging feature.

Conversations are text only, meaning users cannot send images, video or links in the messaging thread, as a security and privacy precaution.

Once two people are matched, they can go on virtual dates using video calls built into the Dating feature.

Facebook Dating users can also can choose to see other people who have similar interests by opting in to syncing Facebook events and groups from their main account. 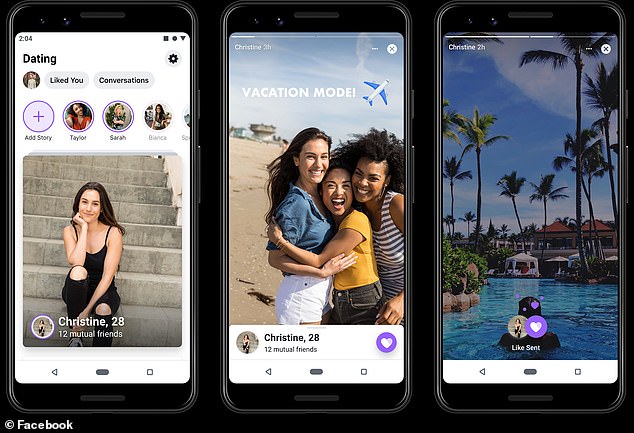 Facebook jumped into the dating game with Facebook Dating last year, which allows users to connect with people in and outside of their friend network

If users are looking for a fellow dog lover, they can see others using Dating who are in the same pet owner groups as them, for example.

Dating profile, Dating messages and who users like or match within Dating won’t appear on your Facebook News Feed, for example.

Facebook Dating users can also be blocked if any potential match or online date turns sour, the firm said. 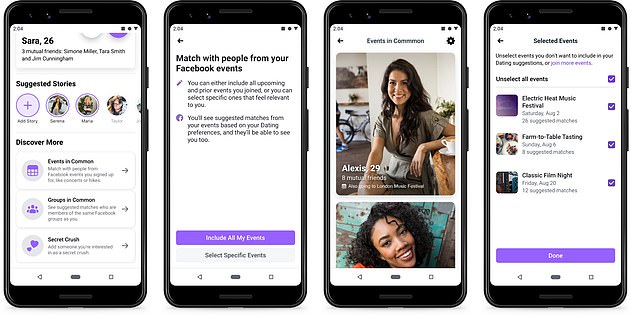 ‘We worked with experts in these areas to provide easy access to safety tips and build protections into Facebook Dating, including the ability to report and block anyone,’ it said.

‘We’re committed to making Facebook Dating a place where people feel comfortable looking for a date and starting meaningful relationships.’

If they do, this is where the dedicated ‘Secret Crush’ tool comes into action, which lets you select up to nine of your existing friends from the network that you’ve always had a thing for. 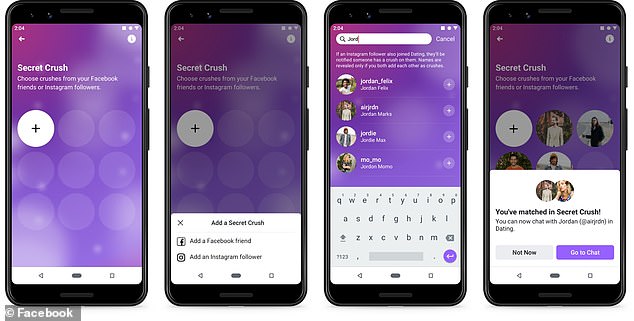 If one of these nine people also adds you to their own Secret Crush list, both of you will be notified that there’s a match.

But if they don’t create a Secret Crush list or add you to it, your crush information will not be shared and will remain a secret.

Secret Crush could be particularly revealing for people who have known each other for decades and have kept their feelings under wraps.

Facebook Dating is already available in the US and another 19 counties in Asia and the Americas, including the Canada, Mexico, Brazil, Singapore, Thailand and Malaysia.

It was originally set to launch on Valentine’s Day in Europe – however, Europeans were made to wait longer thanks to the decision of the DPC, which was concerned about late notice. 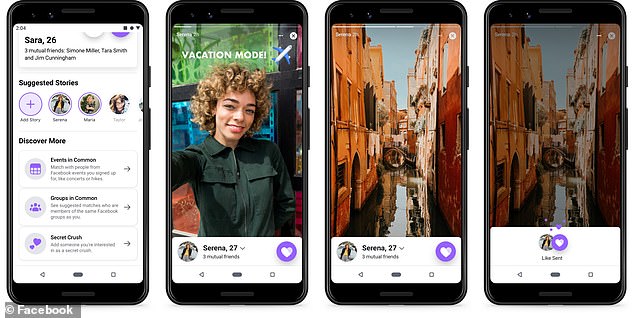 The DPC said it was first informed by Facebook about its intentions on February 3, about a week and a half before an intended roll-out on February 14.

DPC claimed no relevant information or documentation was provided on February 3, such as a Data Protection Impact Assessment (DPIA), which firms are required to submit in accordance with GDPR.

‘We were very concerned that this was the first that we’d heard from Facebook Ireland about this new feature, considering that it was their intention to roll it out tomorrow, 13 February,’ the regulator said in a statement on February 12.

‘In order to expedite the procurement of the relevant documentation, authorised officers of the DPC conducted an inspection at Facebook Ireland Limited’s offices in Dublin on Monday last, 10 February and gathered documentation.’

LOVE IN LOCKDOWN: MORE THAN HALF OF BUMBLE USERS ARE NOW SEEKING MORE ‘MEANINGFUL RELATIONSHIPS’

More than half of online daters are seeking long-term relationships after the coronavirus lockdown is lifted, according to a survey.

Dating app Bumble, which is known for letting putting ‘women first’, estimates that 52 per cent of its UK users will seek a steady partner post-social distancing.

‘Pre-dating’ video chats – a feature launched last year that lets users meet online before an in-person date – has also seen more than a 40 per cent rise in lockdown.

This shift to video to meet people during lockdown has left a lasting imprint and is ‘here to stay’, the app’s developer has said.

The pandemic has also sparked a ‘slow love trend’ that gives users more time to allow a romantic attachment to naturally flourish.

‘Digital intimacy’ – including the sending of intimate photos and video via the app – is also expected to become more important by half of respondents.

Bumble, which has released new features specific to lockdown including a ‘virtual date badge’ that shows a user wants digital-only meetups, believes social distancing has ‘drastically changed’ the way we date.

The company used internal data and online polling between May 15-18 with a sample of 726 men and women from the UK, to find out more about changes to dating habits mid-lockdown – and any lasting long-term effects.