Mayor Eric Garcetti, who’d been cheering the team on, warned Angelenos against gathering during the coronavirus pandemic, but crowds convened anyway.

“As we cheer our Lakers’ 17th championship, please remember it’s still not safe to gather in groups,” Garcetti tweeted. “Let’s honor our city’s triumph by protecting others and making sure we don’t spread the virus. Please celebrate safely at home. Do not gather at Staples Center. Thank you!”

A group of fans set off fireworks, which are illegal in unincorporated areas of L.A. County without a permit, and cars were seen doing “donuts.”

And what started as celebratory dissolved into confrontations between fans and law enforcement, who fired non-lethal projectiles. SWAT team members were among those who responded to the growing crowd.

Garcetti told KCAL9 in a phone interview that the California Highway Patrol closed freeway exits in downtown L.A. to discourage large gatherings, but what appeared to be thousands of people had already crowded the streets. KCAL said rocks and bottles were thrown at officers. 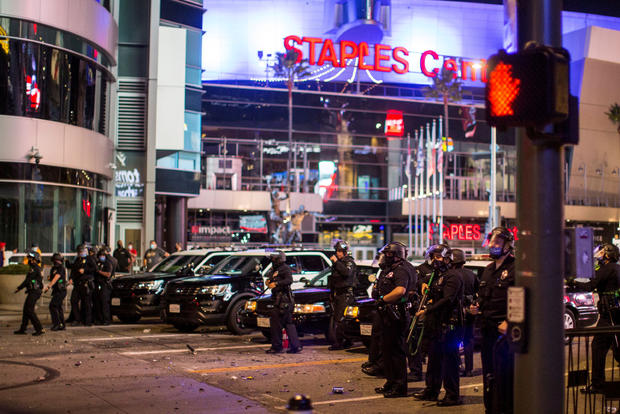 CBS L.A. says police responded with “beanbag” rounds and rubber bullets in an effort to get the crowd to disperse.

There was no word on whether any arrests were made.

Earlier, many fans told CBS L.A. that with all the challenges 2020 has brought — including COVID-19-linked deaths, job losses and other struggles — this was the perfect way to kick off the upcoming week. 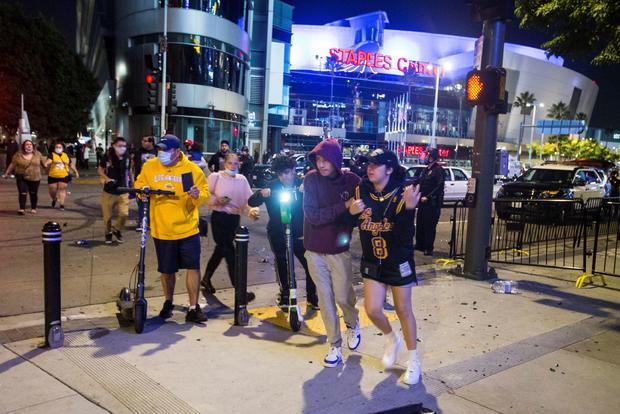 “Los Angeles really needed this. It’s been a rollercoaster for everybody around the world,” Lakers fan Gregory Paul said.

The Staples Center is the Lakers’ home arena but the game was played in the “bubble” in Lake Buena Vista, Florida, set up by the NBA protect players and league personnel from the coronavirus.