Fascinating book reveals the myths, lies and blunders on maps

From a flat Earth to Australia’s ‘inland sea’ and the ‘island of California’: Fascinating book reveals the myths, lies and blunders on maps throughout the ages

Australia had a vast inland sea, California was an island – along with Korea – and bizarre and terrifying sea creatures populated the oceans.

Welcome to the cartography of yesteryear, when maps were informed not just by mathematics and exploration, but also by huge dollops of folklore and imaginative speculation – as fascinating book The Phantom Atlas, the Greatest Myths, Lies and Blunders on Maps by Edward Brooke-Hitching reveals.

His fascinating tome gathers together the wildest misbeliefs ever drawn on maps, ‘revealing the world as it existed purely in the imaginations of our ancestors’.

Delve into it and you’ll discover the Mountains of Kong striding across Africa, the non-existent paradise of Poyais and a flat Earth held aloft by four angels.

Brooke-Hitching doesn’t just present the maps, though – he explains their origins and why their depictions were so widely believed.

Scroll down for a peek at some of the mesmerising maps he analyses. 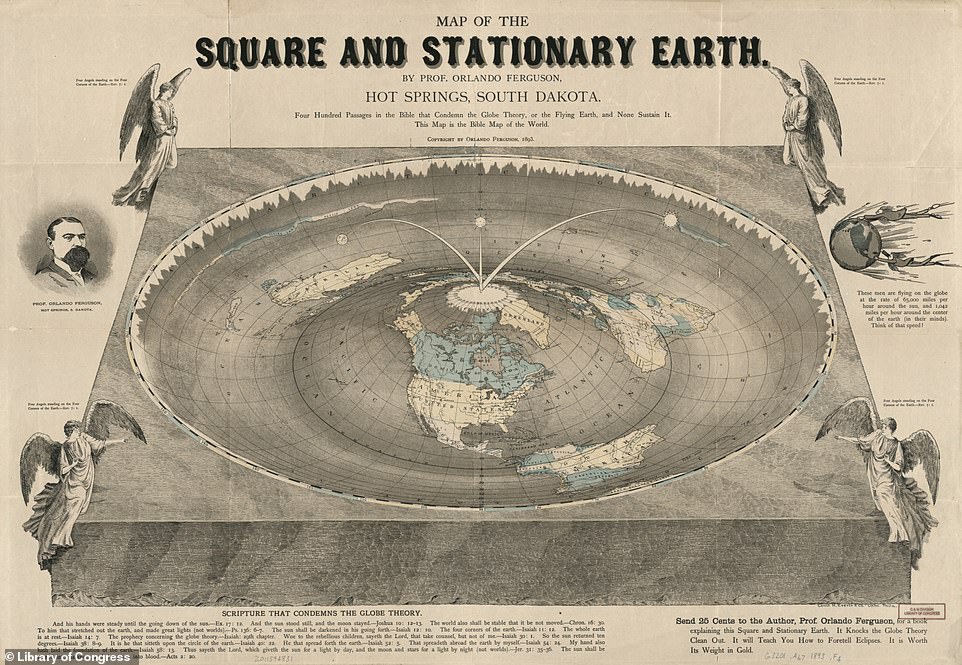 This map, explains Brooke-Hitching in Phantom Atlas, was created by Professor Orlando Ferguson of Hot Springs, South Dakota, in 1893, to illustrate his belief that the Earth is flat and square. Ferguson’s assertion came, apparently, from taking passages of the Bible literally, such as one in Revelations 7:1 that speaks of ‘four angels standing at the four corners of the earth, holding back the four winds’

This is the Tabula Rogeriana, a map drawn in 1154 by one of the most respected cartographers of the 12th century – Muhammad al-Idrisi (1099-1165). It shows Europe, North Africa and parts of Asia, including the mythical islands of Wak-Wak in the very bottom right-hand corner. Brooke-Hitching explains that these islands in reality probably represent Japan, as ‘Wo-Kowk’ is an old Cantonese term for that country. Various explorers used the map, including Christopher Columbus 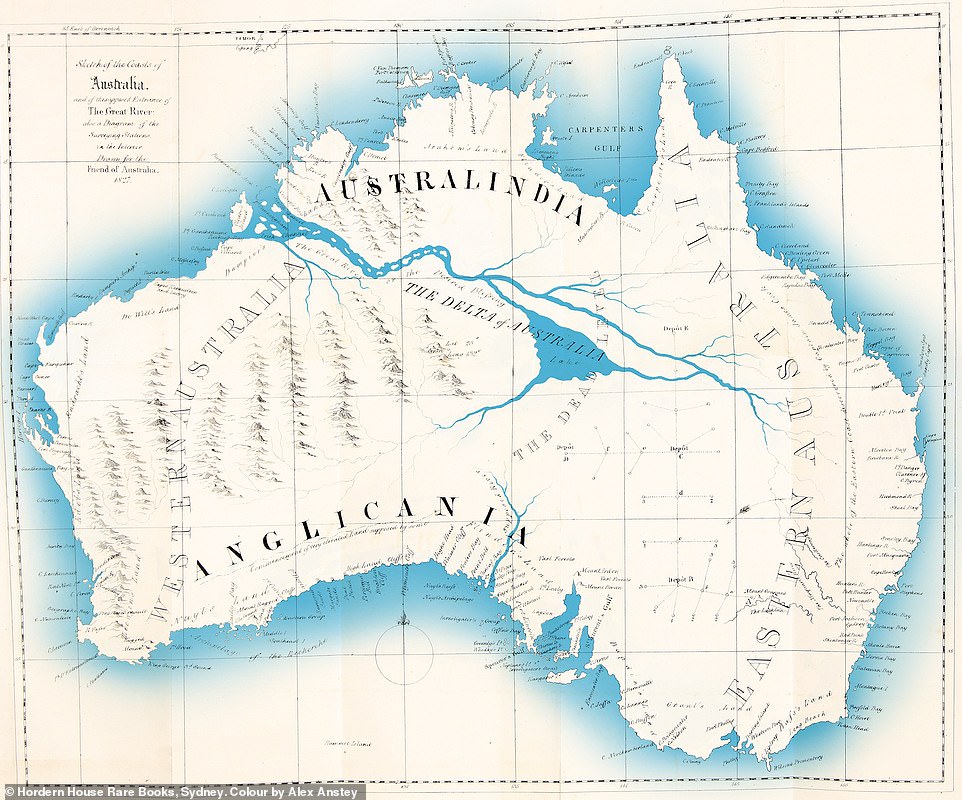 This ultra-rare map by English writer Thomas J Maslen shows Australia’s highly theoretical ‘inland sea’. It accompanied, reveals Brooke-Hitching, Maslen’s 1830 book The Friend of Australia, designed as a reference guide for explorers of the country and written 42 years after the British First Fleet landed at Botany Bay. It had a print run of just 250. The theory, says Brooke-Hitching, that Australia harboured a vast undiscovered system of rivers and lakes had been popular for years at the time, but Maslen ‘ran away with the idea in spectacular fashion’. He describes The Friend of Australia as ‘the ultimate monument to speculative geography’ 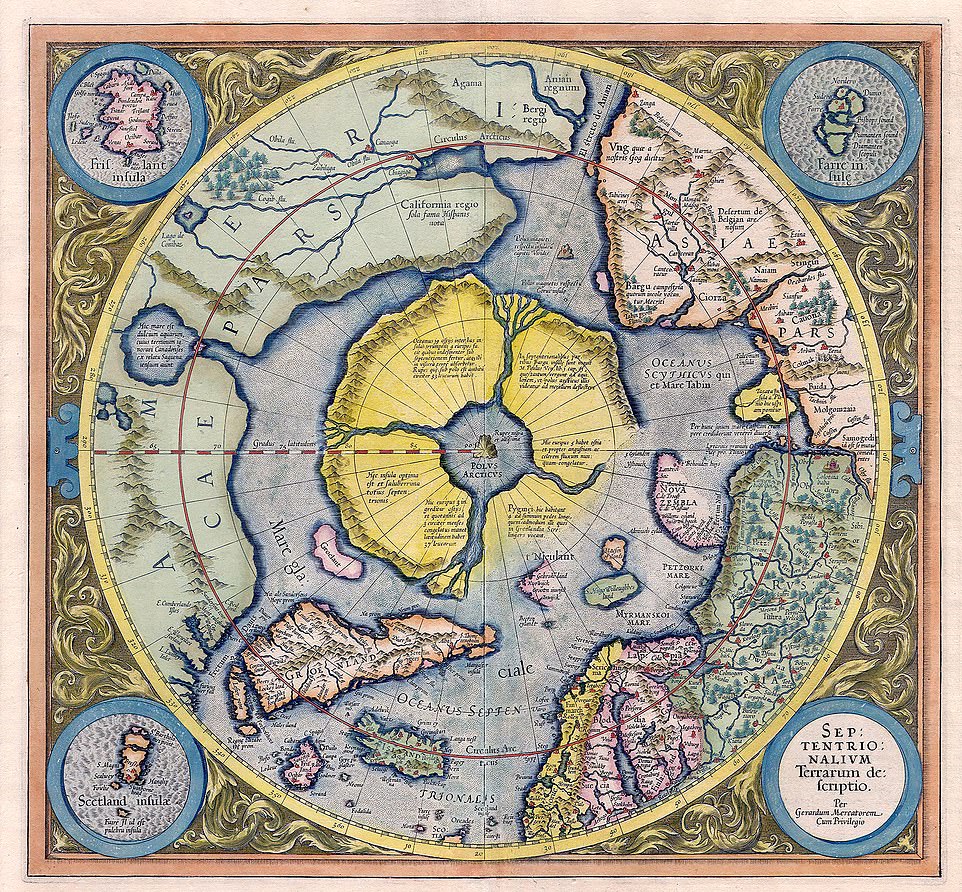 Belgian Gerardus Mercator’s 1606 map of the Arctic showing it as four islands surrounding a mythical black magnetic mountain, which he described as ‘high as the clouds’ 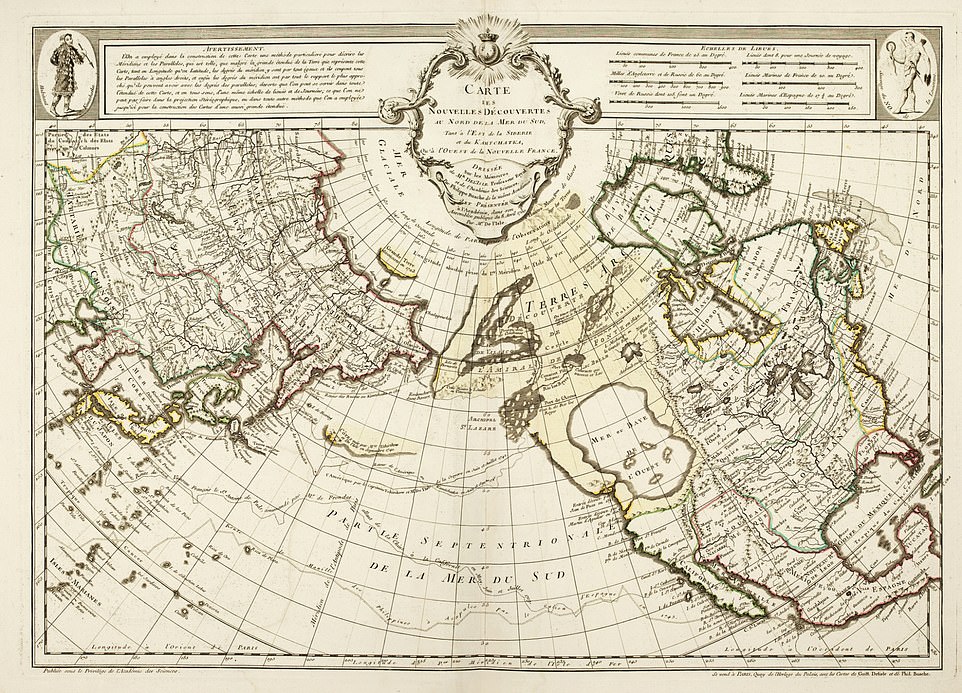 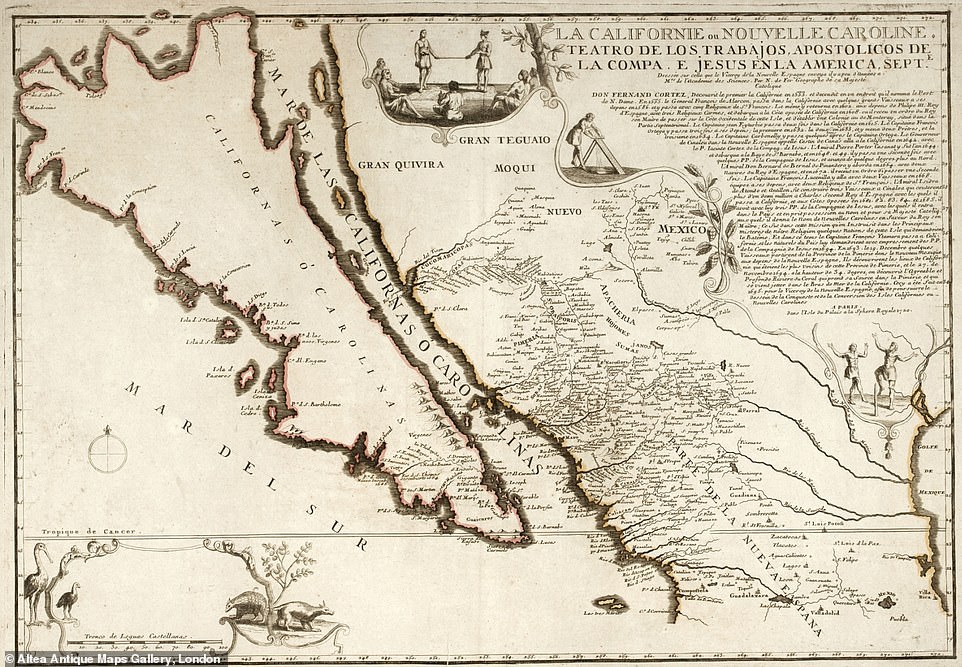 La Californie ou Nouvelle Caroline, created by Nicholas de Fer in 1720, shows ‘one of the largest and finest depictions of the island of California ever produced’. California, says Brooke-Hitching, actually appeared correctly as being attached to the mainland when it made its map debut in the 16th century, but then was redrawn as an island a total of 249 times across decades. It’s thought the misconception can be traced to the 1602 voyage of Sebastian Vizcaino up the Californian coast. Vizcaino wrote in his journal of the ‘mediterranean Sea of California’. This description went on to be misunderstood and mapped. Eventually, Ferdinand VI of Spain declared in 1747 that California was not an island following exploration by 18th-century explorers 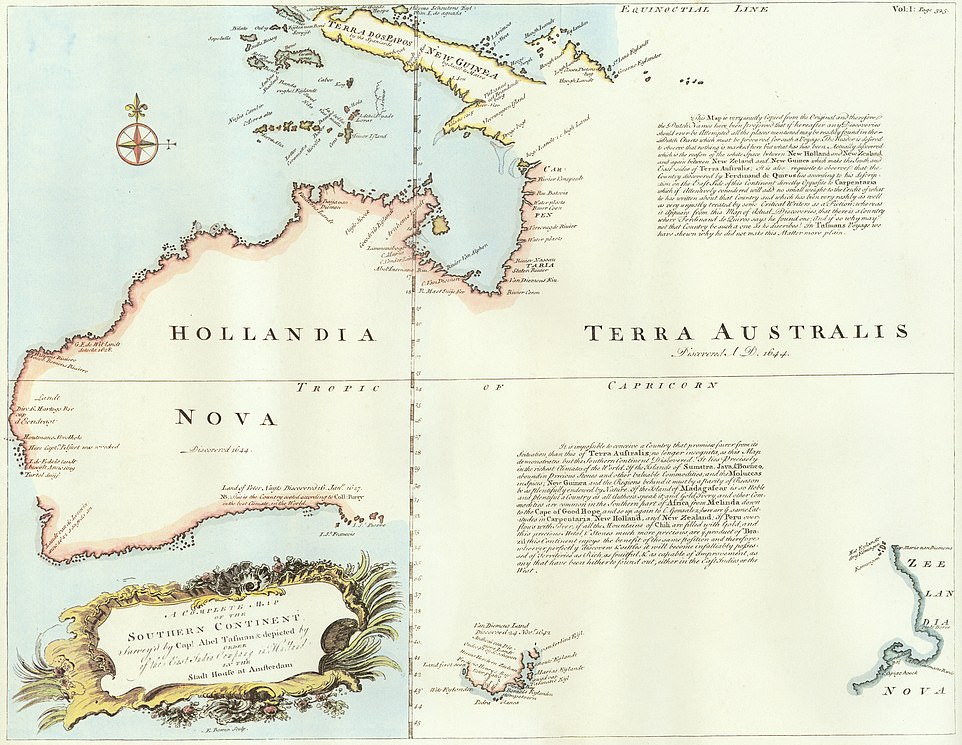 This is the first printed English map of Australia. It was made by Emanuel Bowen and shows the extent of discovery by 1767, writes Brooke-Hitching 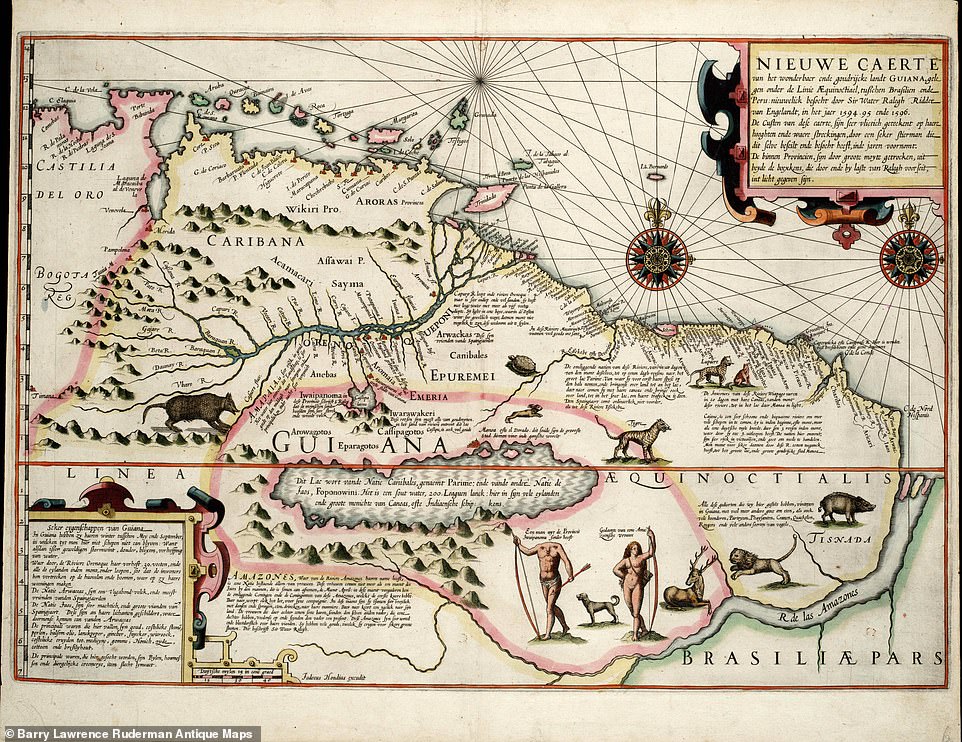 A 1598 map by Flemish cartographer Jodocus Hondius of French Guyana, based on Sir Walter Raleigh’s description of the region. It shows the mythical Lake Parime, with lost-city-of-gold El Dorado on the north shore, and headless men in the south 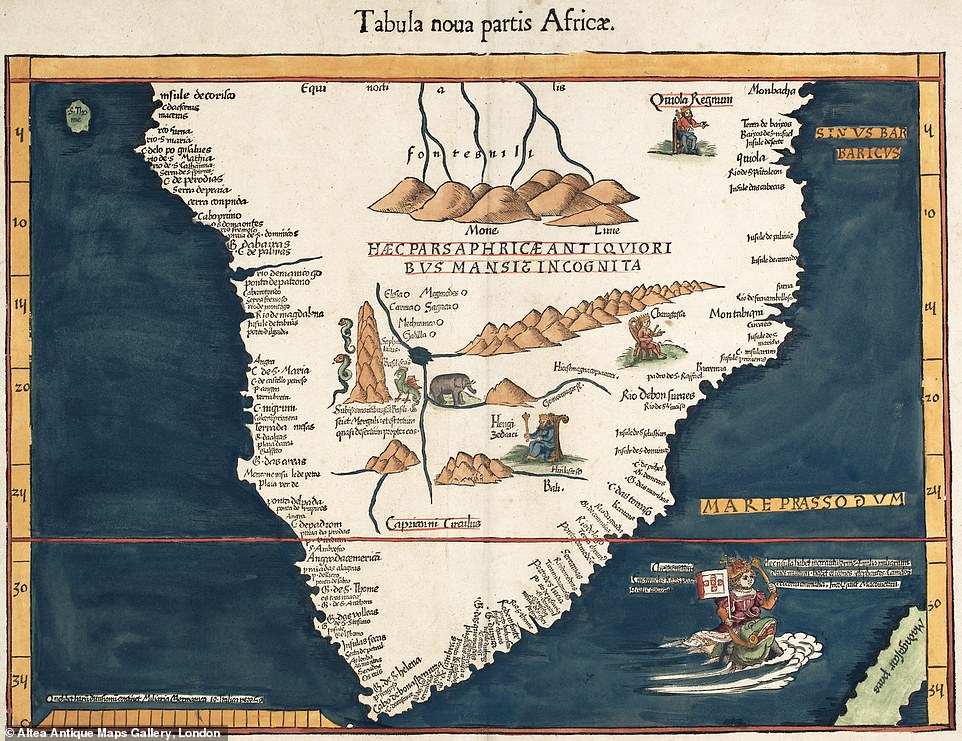 Martin Waldseemuller’s Tabula Nova Partis Africae, which dates to 1541 and shows the Mone Lune, or Mountains of the Moon, believed at the time to be where the Nile sprang from. Bottom right is the King of Portugal riding a sea monster, which Brooke-Hitching says represents the expansion of Portugal’s mercantile empire under his reign 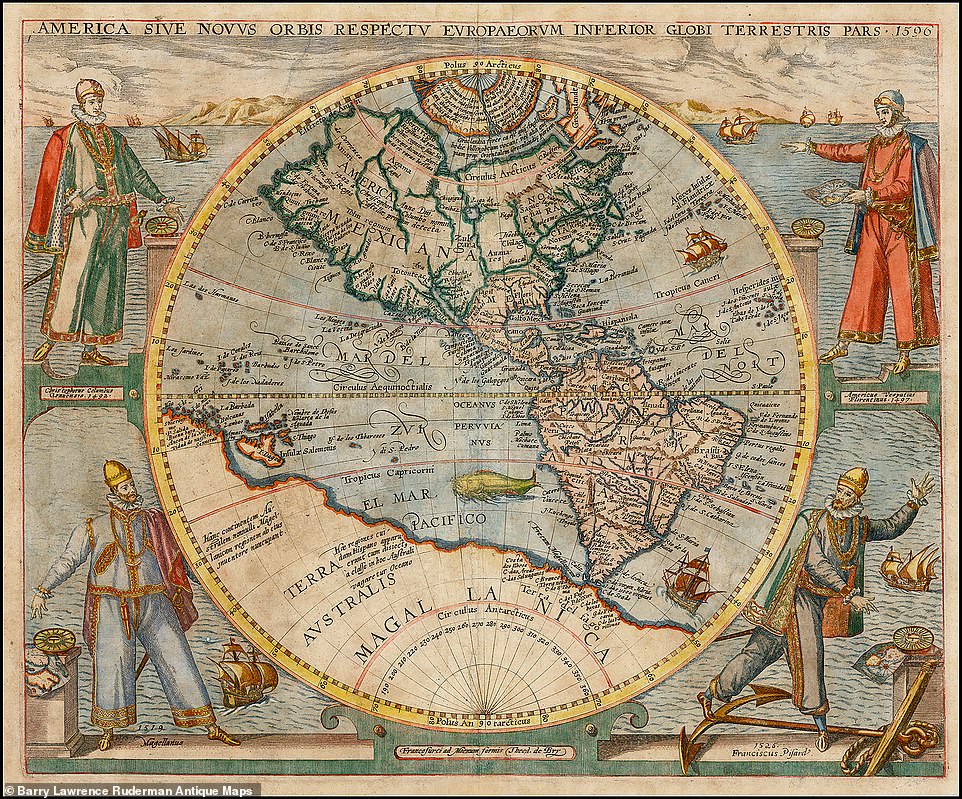 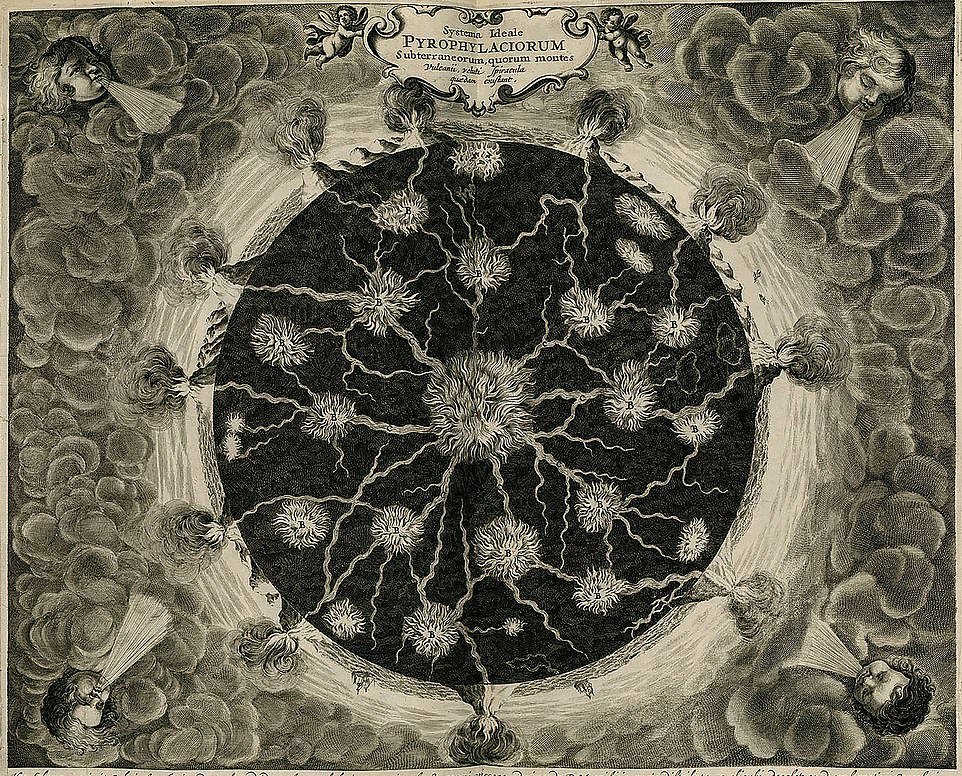 Athanasius Kircher’s 1665 depiction of the ‘fire canals’, or volcanic system, of the subterranean world 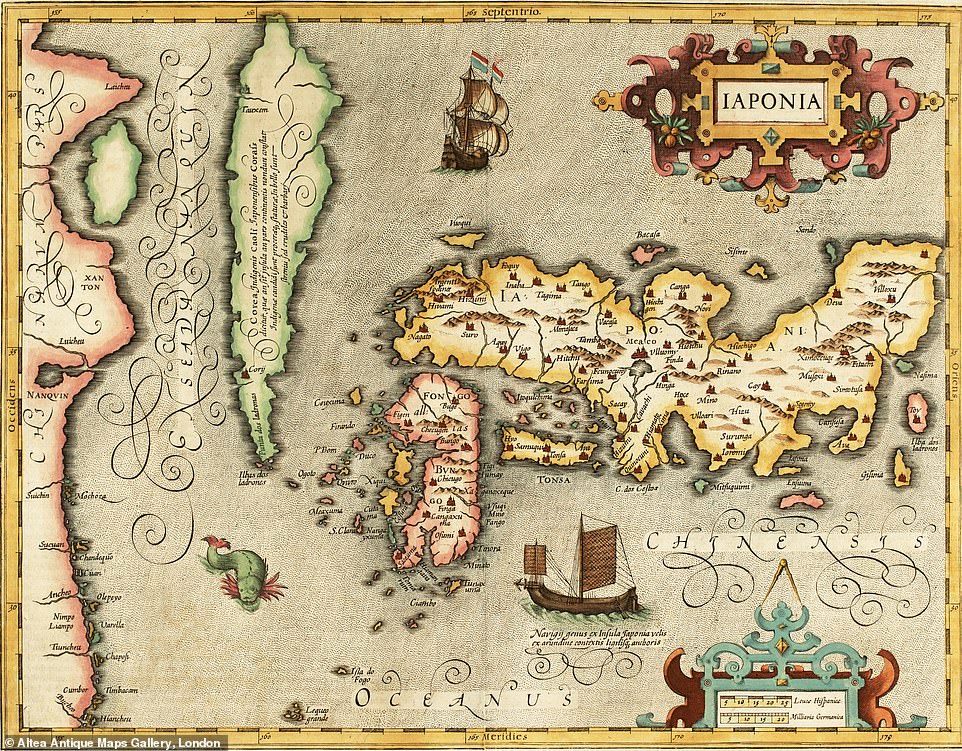 Hondius’s annotated depiction of Korea as an island on a map that dates to 1619. Brooke-Hitching says that how Korea came to be thought of as an island by Europeans in the late 16th and 17th centuries ‘is not known for sure’. He surmises that it’s probably a combination of incomplete exploration and speculation 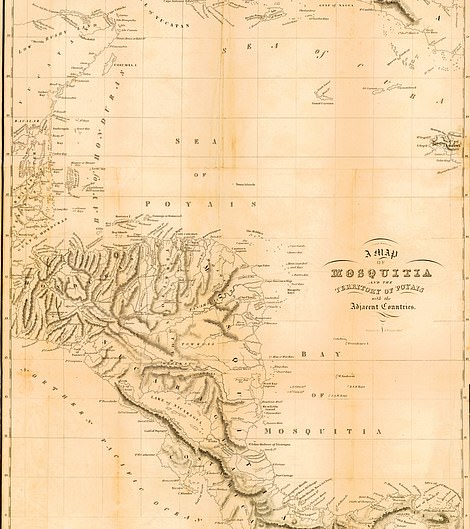 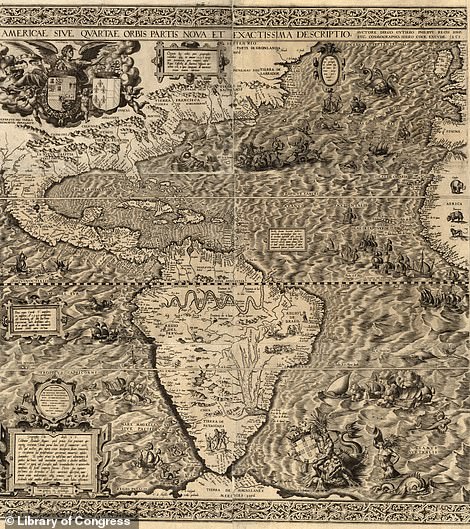 LEFT: A map of Mosquitia and the made-up Central American territory of Poyais, which confidence trickster ‘Sir’ Gregor MacGregor persuaded hundreds from England and Scotland to sail to in the 19th century for a price with the promise that they were heading to paradise. In reality they’d been sent to a malarial swampland with no trace of civilisation. RIGHT: The ornate Americae Sive Qvartae Orbis Partis Nova Et Exactissima Descriptio [A New and Most Exact Description of America or The Fourth Part of the World] by Diego Gutierrez (1562) 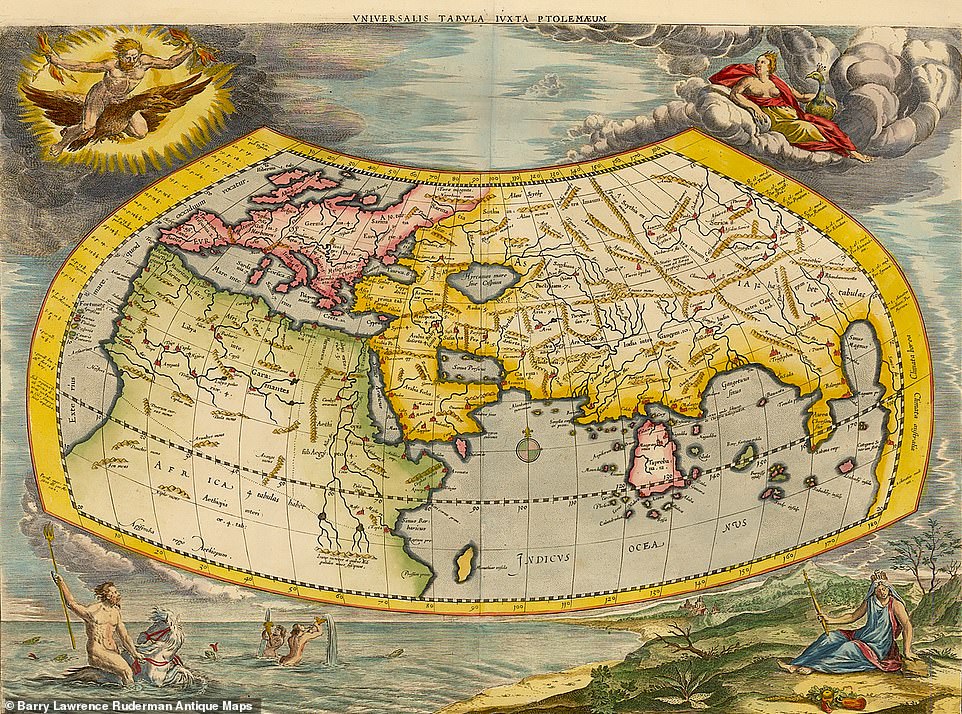 The revised second state of Mercator’s Universalis Tabula Iuxta Ptolemaeum (published in 1578), also shows the aforementioned Mountains of the Moon in Africa as the source of the Nile 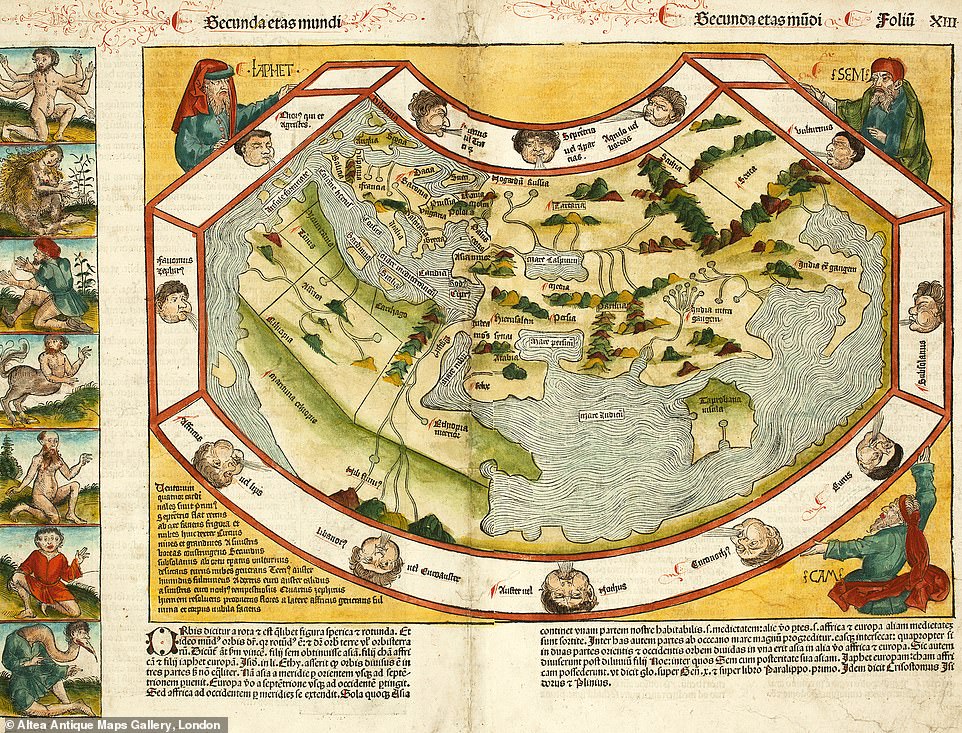 The stunning Liber Chronicarum, or Nuremberg Chronicle, by Hartmann Schedel, published in Nuremberg by Anton Koberger in 1493, describes the history of the Christian world and includes a map containing monsters believed to inhabit far-off lands 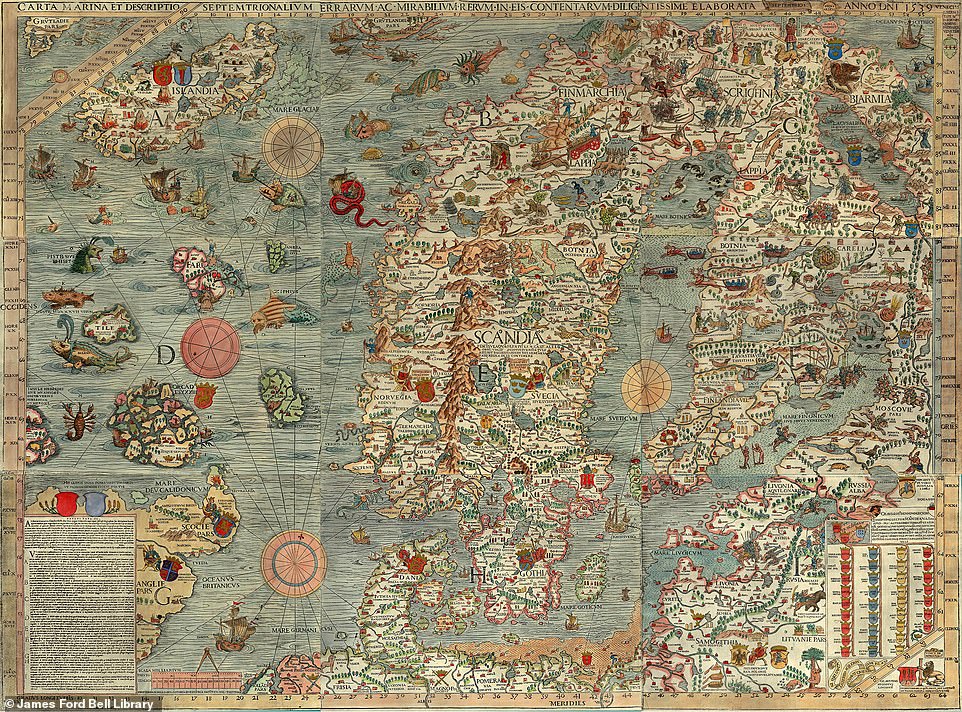 Olaus Magnus’s intensely imaginative Nautical Chart and Description of the Northern Lands and Wonders (1527-39). Mariners’ accounts and folklore informed the Swedish geographer and historian’s work, Brooke-Hitching says. The creatures depicted here include the sea pig, a giant lobster and a sea rhinoceros 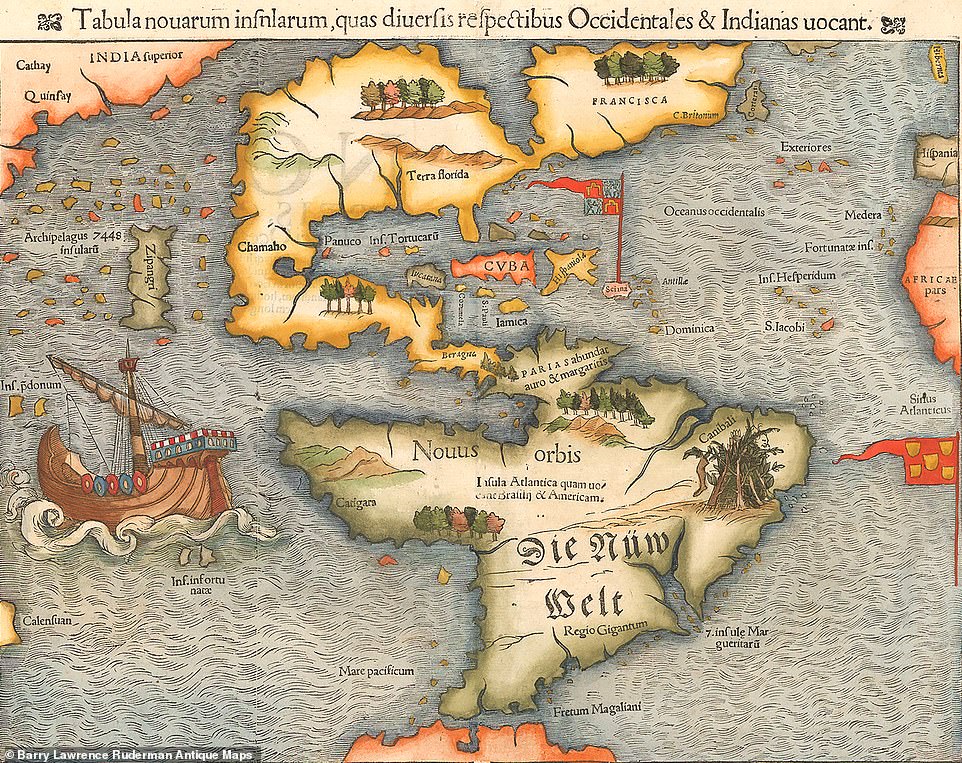 This 1554 creation by German cartographer Sebastian Munster was the first printed map of the American continent. At this point in time, reveals Brooke-Hitching, Europeans thought the Pacific and Atlantic were divided by a pencil-thin slice of North America 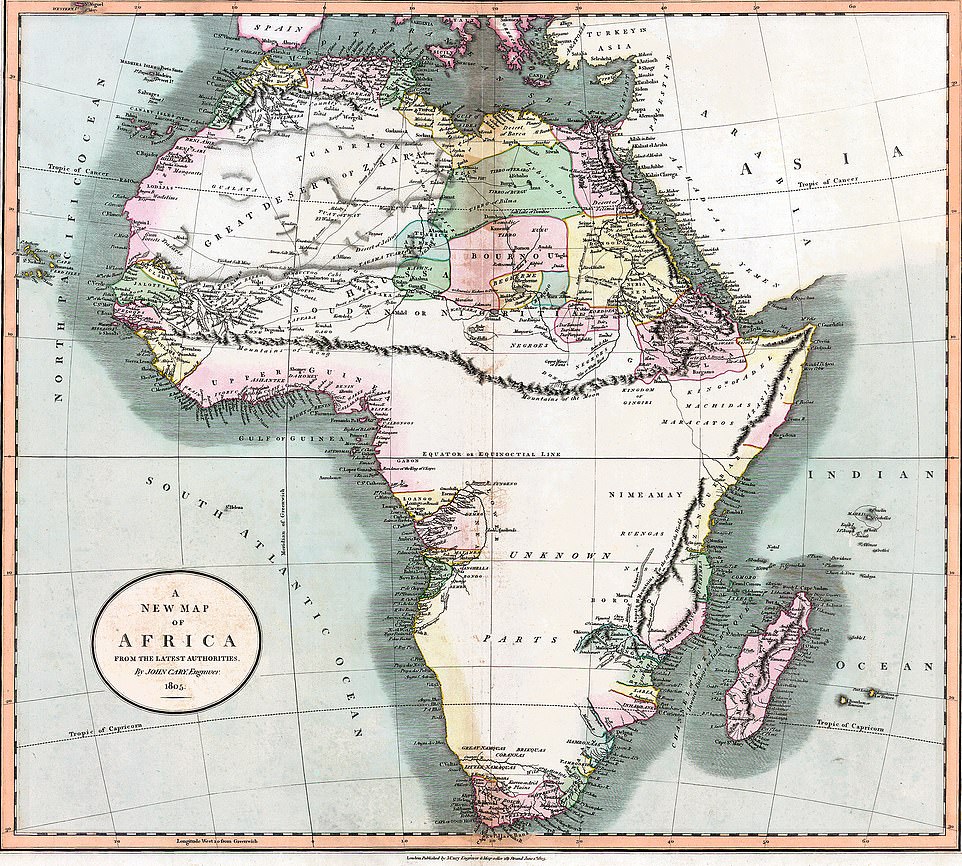 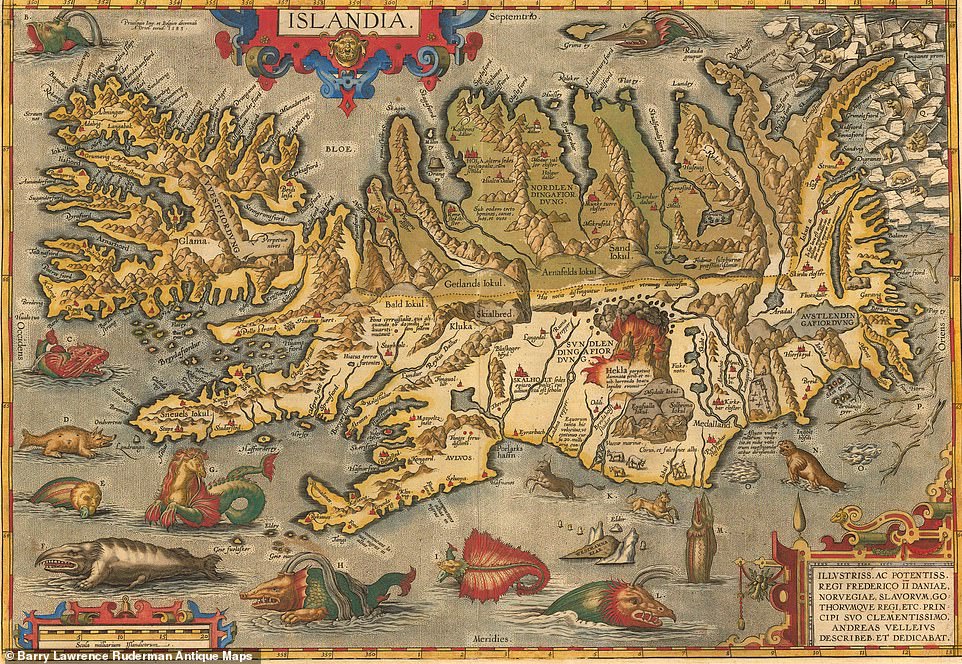 Abraham Ortelius added a few monster flourishes to his 1590 map of Iceland. Ortelius was the first to propose the idea of continental drift 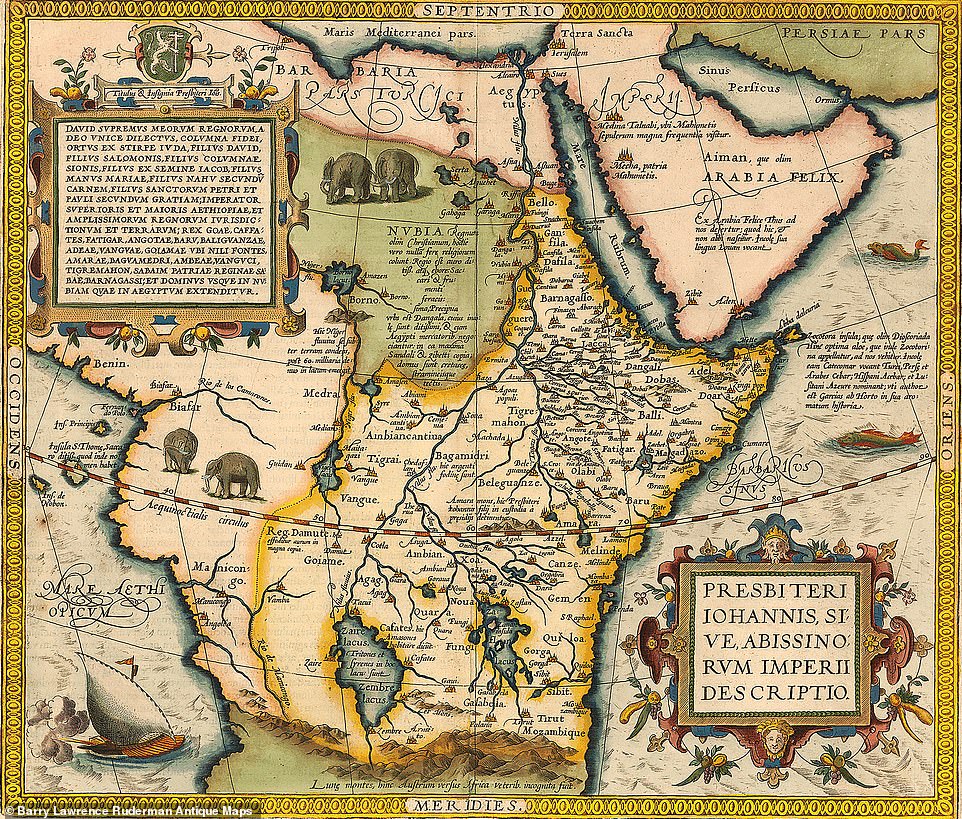 Ortelius’s 1573 map of the kingdom of legendary priest-king Prester John in Africa. He was said to be a descendant of the three kings in the Bible but by the 17th century it was accepted he probably had never existed 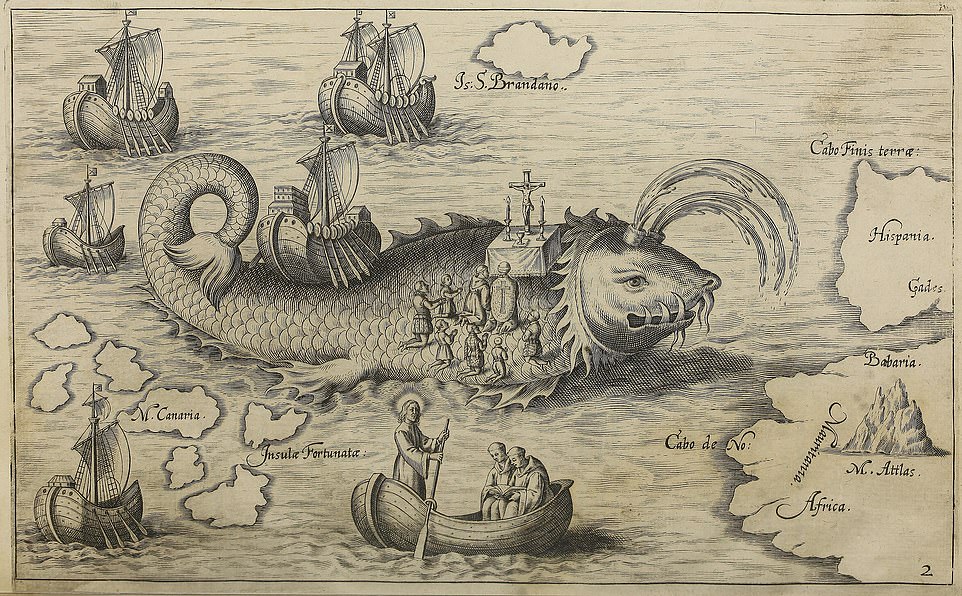 St Brendan, an Irish monastic saint, celebrating Mass on the back of a whale, from Caspar Plautius’s Novo Typis Transacta Navigatio (1621). The Voyage of St Brendan is thought to have taken place in the sixth century. It was a search for the ‘Promised Land of the Saints’, which well into the 17th century was designated cartographically as being near the coast of Newfoundland 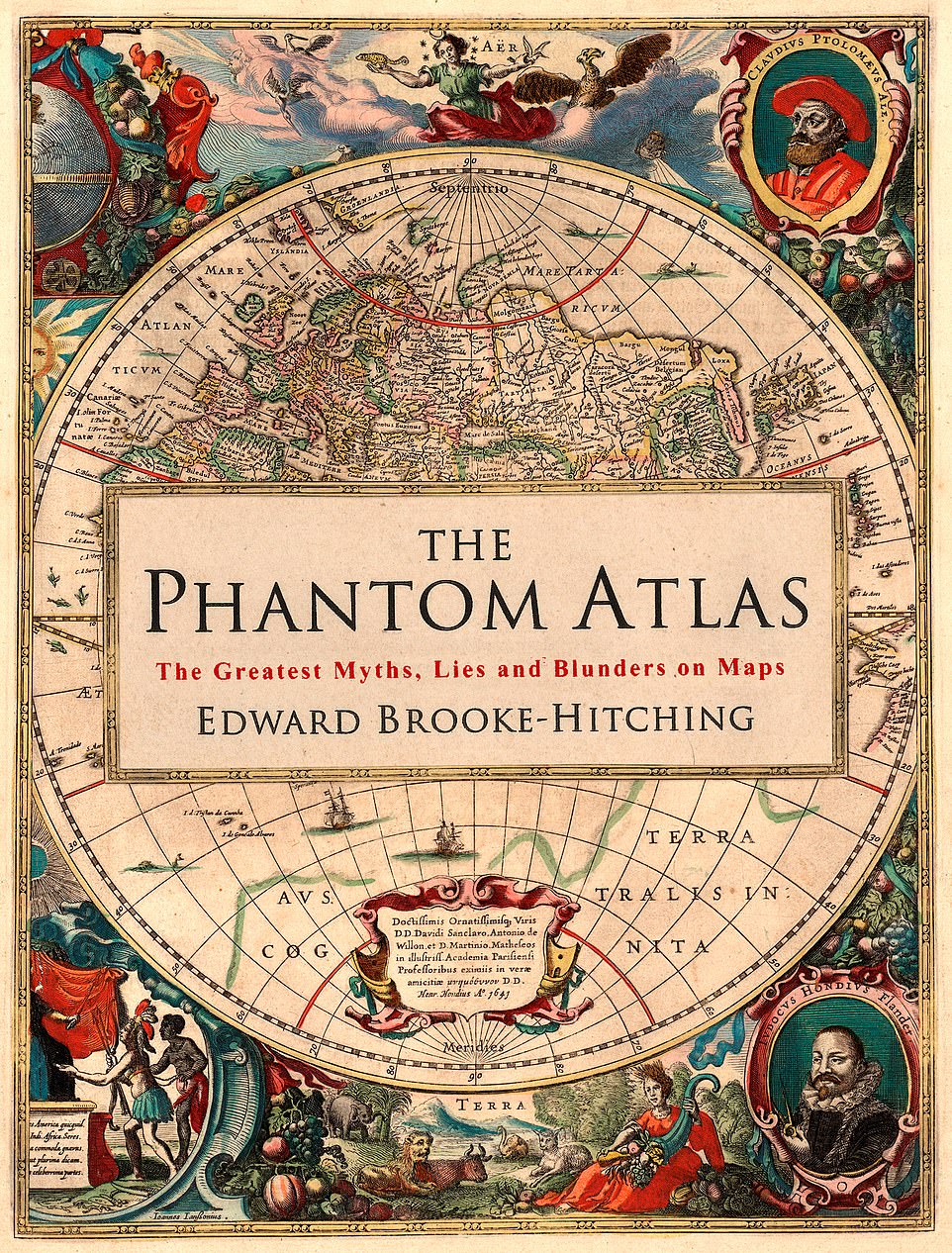 The Phantom Atlas by Edward Brooke-Hitching, published by Simon & Schuster, £25.00