Sweet escape! DIY dad creates an impressive two-storey playhouse for his daughter, 3, and reveals he spent JUST £10 on materials

A father who spent just £10 on materials to create a spectacular ‘treehouse’ for his daughter, has impressed DIY fans.

Images of the impressive two-storey structure sat in Tom’s back garden, follow weeks of hard work. 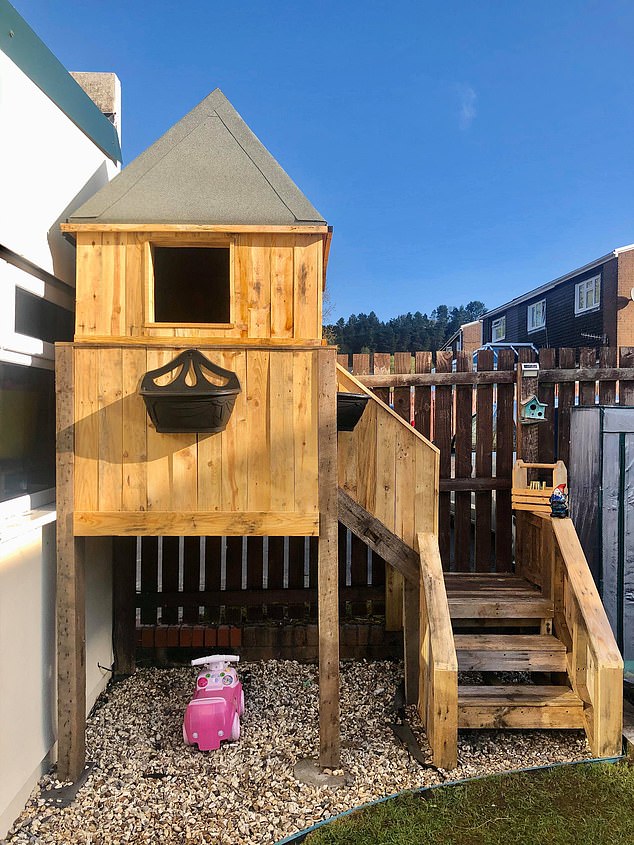 Tom Cole, 31, from Abergavenny, Monmouthshire, has created an impressive playhouse (pictured) for just £10 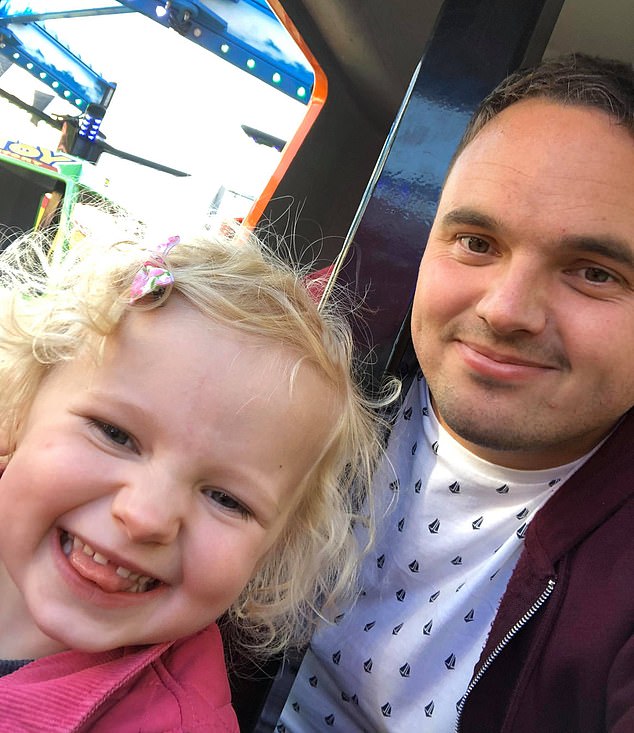 Tom brought pallets from a neighbour to create the structure for his three-year-old daughter Mila. Pictured: Tom and Mila

Tom spent just £10 towards the pallets, which be bought from a neighbour.

Tom revealed that he had only planned to make a ‘basic’ structure, but the end result was the ‘awesome’ treehouse pictured.

He posted a photo of Mila enjoying her castle, captioned: ‘Grand total of £10 spent on it.

‘Stripped down a load of pallets which is the biggest pain in the a***! One happy girl.’ 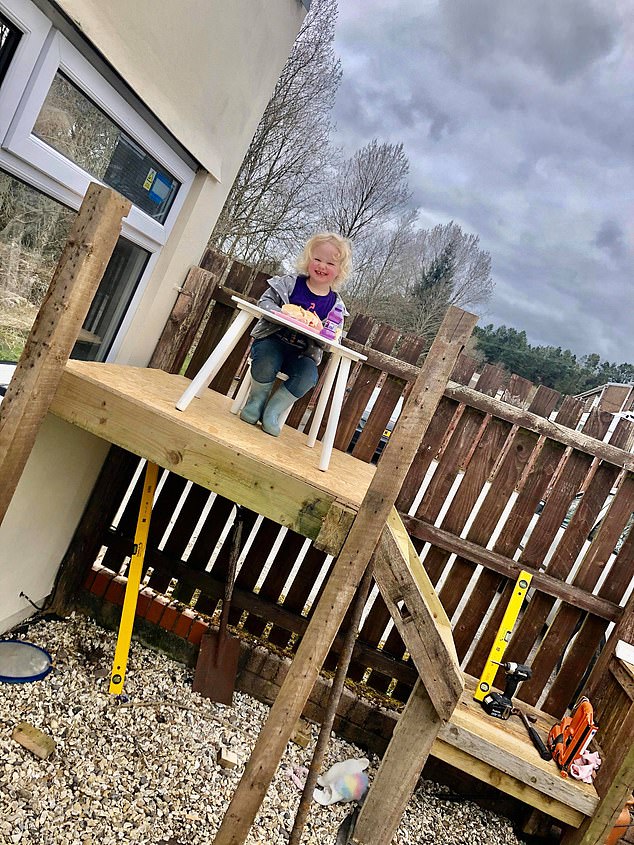 Tom received a stream of praise across social media, after sharing photos of the two-storey ‘treehouse’. Pictured: Mila during the construction process

Tom’s post, which has racked up more than 4,000 likes has blown away social media users.

Another said: ‘That’s awesome, lucky lady’, and a third added: ‘Mate, that is class.’

Speaking today, Tom said: ‘The only £10 I spent to be totally honest was the pallets. 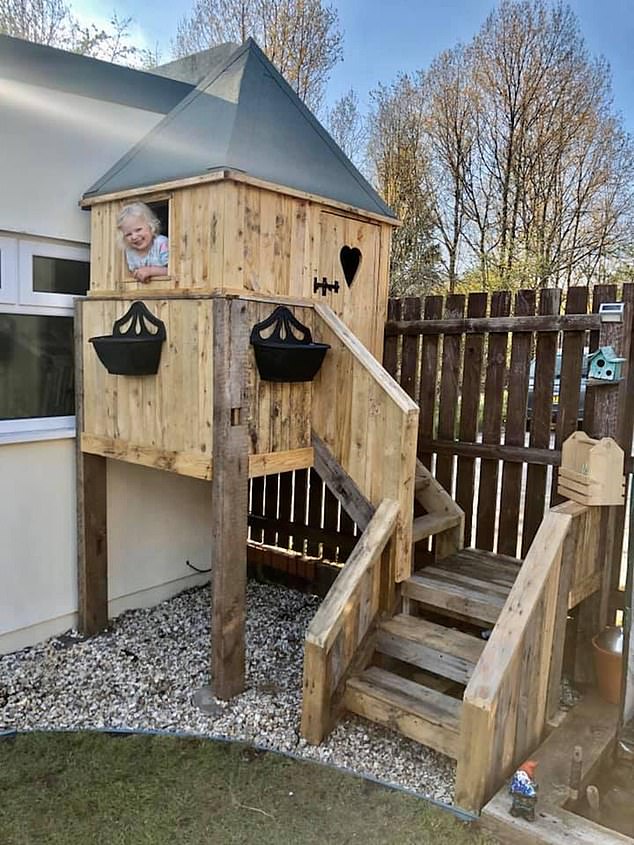 Tom who has struggled to keep Mila entertained during lockdown, said the project helped to pass the time. Pictured: Mila in the finished playhouse

‘I know they can be sourced free and the guy I get them from is happy enough to give them to me, but I wanted to give him a little something as thanks.

‘I did it slowly over the course of a few weeks. There is only so much pallet stripping one can take at a time to be fair.

‘I have found it difficult to keep Mila entertained with my other half having to be in work, but this project really did help us pass the time together, she’s a good helper.

‘I’m proud of her, that’s for sure. People say I should be proud of building it. All I aim to do is make her happy which I guess I have done.’ 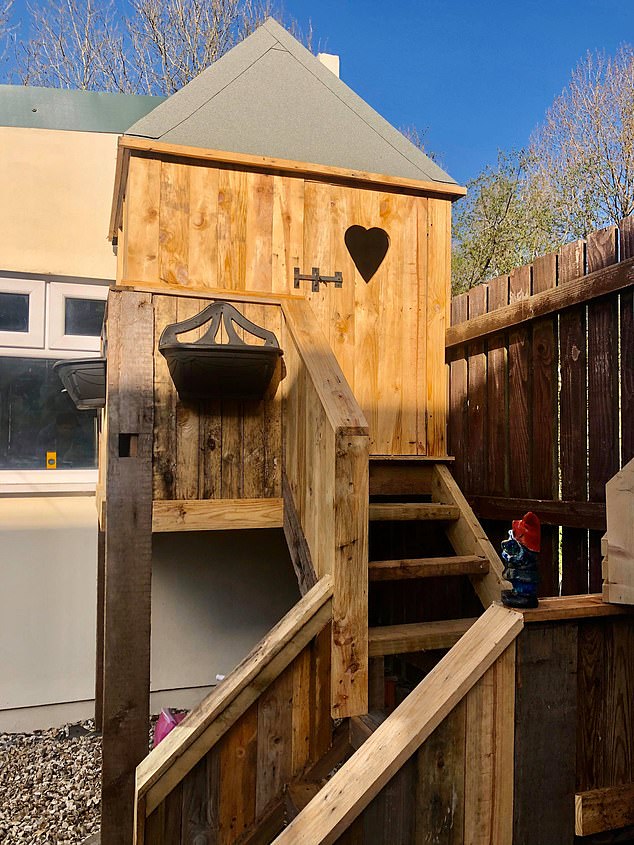 Tom revealed he’s proud of Mila and his aim with building the structure was to make her happy. Pictured: The finished structure