I lost thousands gambling … then tried to kill myself: One lost her home and husband. Another borrowed money for bets from her son. As the number of female problem gamblers in Britain tops 75,000, four victims share their desperate stories

Sitting at work, Tamsin Elliot placed another £10 on the online casino game lighting up the smartphone screen under her desk. Adrenaline surged as she netted £50. Excitement subsided, however, when a subsequent bet wiped out most of her winnings.

She continued in £10 increments, losing more than she won, her sole thought that this time she might hit the much-trumpeted £100,000 jackpot. It was only when she reached the bottom of her overdraft and realised she’d frittered away £2,500 before lunch, that she stopped. ‘I felt sick, and then anxiety, stress and fear set in,’ says Tamsin, 40.

The quietly-spoken mother of two is in a loving relationship and has a rewarding career as a scientist, yet her secret online gambling habit has spiralled during lockdown. Since last March, Tamsin has spent over £10,000 on gambling sites. She visits them daily — while at work, with family, even in the middle of the night.

Her addiction has forced her to take out three high-interest loans, ruined her credit rating and made it impossible to get a new mortgage. Yet when she’s gambling, this debt is all but forgotten. 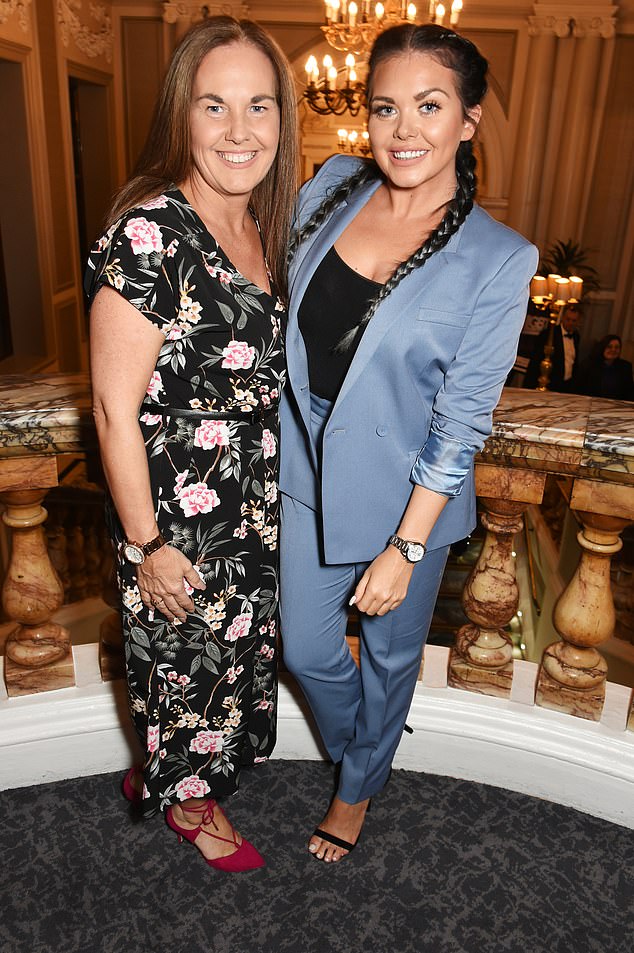 Women who’ve battled a gambling addiction share their experience, as it’s revealed there are around 75,000 problem female gamblers in the UK. Pictured: Betty Moffatt stole £50,000 from daughter Scarlett

‘You can spend at the click of a button. It’s terrifying, but it doesn’t feel like real money,’ she says.

This year, the Government is reviewing the legislation governing the gambling industry, amid concern about the lives ruined by addiction. And whereas gambling has traditionally been associated with men in betting shops and casinos, women are now the biggest cause for concern.

Last January, charity GamCare revealed women reporting gambling problems had risen by a third in five years. There are now around 75,000 problem female gamblers in the UK.

Seventy per cent of women who gamble use apps and websites.

Coronavirus restrictions at the end of last year gave rise to a spike in online gambling with yields among the biggest operators up 30 per cent, according to the latest figures from the Gambling Commission.

Earlier this year, it was reported reality television star Scarlett Moffatt’s mother and manager, Betty, 50, had developed an online gambling addiction in lockdown that led to her stealing £50,000 from her famous daughter to fund her habit.

Unlike alcohol or drug dependence, gambling is a hidden addiction through which users can, on the surface, continue to function.

‘At first gambling feels like a coping strategy,’ agrees Liz Karter, a therapist who specialises in women’s gambling problems. ‘For most women, it is about seeking a sense of calm. 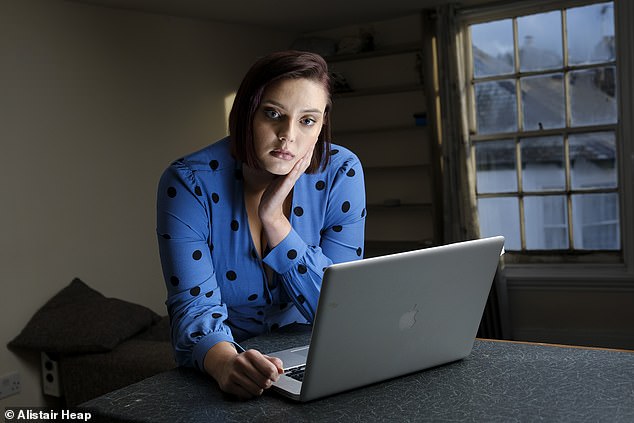 Abbey Little, 24, (pictured) whose addiction has cost her £5,000 and left her suicidal, revealed she placed a bet after receiving adverts on Facebook and YouTube

‘Women who wouldn’t have wanted to go into a bingo hall or arcade are now gambling. We see more professional women doing it.’

Tamsin started gambling after moving from London to Surrey three years ago. Her husband’s academic career was blossoming, but she only earned £16,000 in a part-time job that fitted around their children, aged nine and five. ‘I didn’t like relying on my partner’s income,’ she says.’

When she saw an online casino advertised in a women’s magazine, she downloaded the app and registered, providing her name, mobile number, date of birth, address and bank account details. ‘It took seconds,’ says Tamsin, whose initial £10 bet won her £150. Thrilled, she started spending £50 a week, keeping her hobby a secret.

For two years, she largely broke even. But anxiety caused by the first lockdown drove her to gamble more, and by last September, she was gambling every day.

By the end of last year, she was betting £200 in gambling sessions lasting as little as 20 minutes.

Gambling sites are keen to stress they promote ‘responsible’ gambling, and Tamsin’s heavy spending — one bank statement reveals 16 payments of bets totalling £1,595 to the same site in a single day last month — attracted the attention of one site’s ‘customer care’ department.

‘The woman who called asked if I was addicted. She ran through a list of questions, asking if I was depressed and spending within my means,’ she says. ‘I told her what she wanted to hear. They didn’t contact me again.’

But such concern is countered by attempts to make gamblers spend more. ‘I am bombarded by emails offering free spins,’ says Tamsin.

Although she and her partner Graham have separate bank accounts, she was forced to tell him she had gambled £2,500 last December, because she had emptied her account.

‘He was shocked but supportive,’ says Tamsin. Graham paid off her debt and Tamsin promised she’d stop. Instead, she took out a £3,000 loan and started again last month.

Because this is her third loan in a year, she is paying 29 per cent interest. ‘I worry I am destroying our family’s finances,’ she says.

Experts believe gambling affects the brain in the same way as drugs and alcohol, releasing the mood-boosting hormone oxytocin and chemical dopamine. Add exploitative advertising campaigns and it’s little wonder so many get hooked.

While gambling adverts often target men through sport, sites aiming at women tend to portray betting as a social activity. ‘Adverts show women gambling online, but together, having a party,’ says Liz. 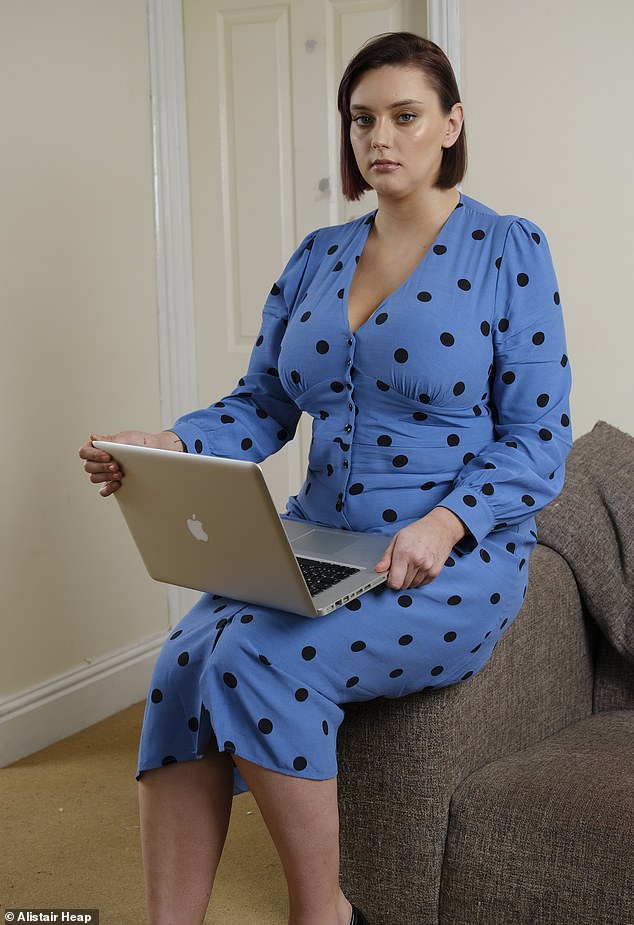 Abbey (pictured) revealed she would gamble most of her £1,200 monthly income as a beauty blogger and felt like she couldn’t escape texts from gambling sites

After Abbey Little, 24, placed a £5 bet on an online tombola in June 2019 ‘for fun’, she was besieged by online adverts.

‘They popped up on Facebook and YouTube,’ says Abbey, a beauty blogger whose addiction has cost her £5,000 and left her suicidal. ‘The sites started texting me every day at 7.30pm. It feels like I can’t escape.’

By the autumn, Abbey was gambling most of her £1,200 monthly income. Her father was forced to pay her rent three times, while penniless Abbey started selling possessions to raise more gambling funds.

In November 2019, after losing £400 in one evening, she swallowed a handful of prescription pills. ‘I wanted a way out of gambling,’ she says.

A friend called an ambulance and she woke up in A&E. ‘I told a doctor I had a gambling problem,’ she says. ‘He said there were charities, but the hospital didn’t offer much help. It was left to me to find it and I didn’t choose to.’

She managed to control her gambling until last summer when, during lockdown, it got ‘out of hand’ again.

Experts say women are likely to be put off by male-dominated gambling support groups and less likely to be able to leave children behind.

To counter this, charity The Gordon Moody Association is this year setting up the world’s first residential course exclusively for women gamblers in the Midlands, which, spokesman Kenneth Smith says, will provide a ‘safe, supportive environment’. 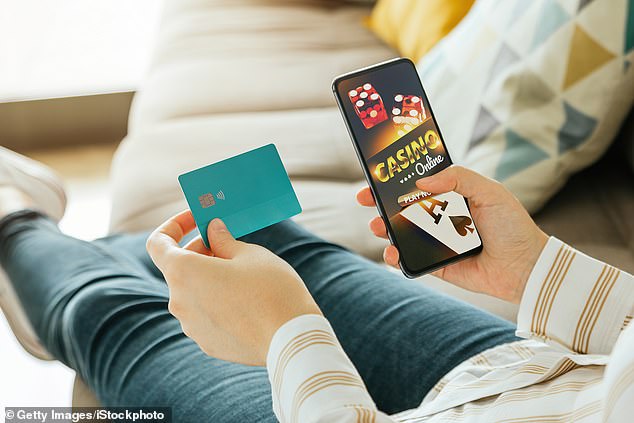 Kerri Nicholls, 38, from Birmingham, who started gambling in 2010, revealed her addiction cost her over £100,000 and left her suicidal (file image)

When Kerri Nicholls, 38, attended Gambling Anonymous, she found the meetings were ‘95 per cent men’. An outreach worker from Birmingham whose addiction cost her over £100,000 and also left her suicidal, Kerri says: ‘It made me feel I didn’t belong.’

She’d started gambling online in 2010, betting £1 a week on football matches. By the following year, her gambling escalated, using websites, rather than apps, to better hide her history on her phone.

After a year, she’d gambled away her £3,000 savings. She started using a credit card and took out loans: ‘I’ve even gambled at a funeral, I just couldn’t stop.’

By 2013, Kerri had persuaded her girlfriend to take a loan out for her to pay off her ‘student debt’. ‘I didn’t have any. It was a way to get more money to gamble.’

By 2015, she had £45,000 of debt and confessed her problem to her partner. Initially, she stopped gambling but just six weeks later she realised her credit rating was high enough for another loan.

Another £25,000 was in her account within minutes and she started betting up to £5,000 a time until, in July 2016, after spending the mortgage money from the joint account she shared with her partner, she finally broke down.

Her seven-year relationship didn’t survive the deception. After considering ending her life, she was given weekly counselling with GamCare as well as attending Gamblers Anonymous for a year, and moving in with her mother. 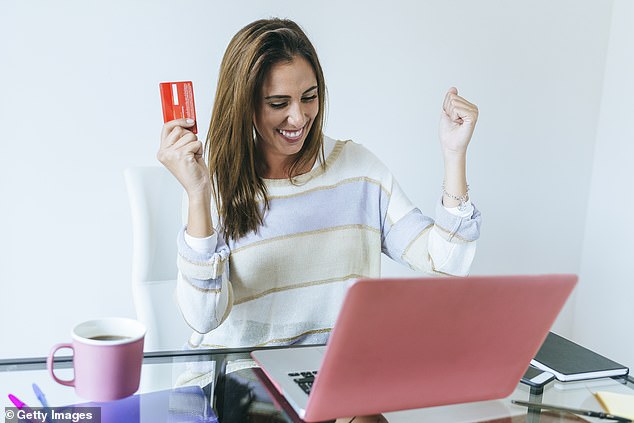 Lisa Walker became addicted to gambling after winning £127,000 at a casino in Southend-on-Sea, Essex (file image)

‘I was enticed back by the casino, who offered me free meals and drinks,’ says Lisa, 48, from nearby Hornchurch, a former teaching assistant who’d only enjoyed occasional bets before that freak win with a Royal Flush.

Yet she kept the extent of it a secret: ‘As a woman with two children, one of them with special needs, I was frightened social services might get involved.’

In 2008, her four-year marriage broke down because of her addiction. Unable to afford her mortgage, she and her children Georgia, now 25, and Danny, 24, spent six weeks in a hostel before the council rehomed them.

In April 2018, she borrowed £2,000 from Danny to pay off a payday loan — and gambled it away. ‘I’d never borrowed from my son. To let him down was my lowest point. I thought “I can’t go on like this,”’ says Lisa, who says she’s spent ‘between £400,000 and £500,000’ on gambling. The next day Lisa, who has remarried, went to a Gamblers Anonymous meeting — one of two women out of 37 people — and hasn’t placed a bet since. She installed Gamstop — software to block gambling websites — and became a support worker for female gambling addicts. 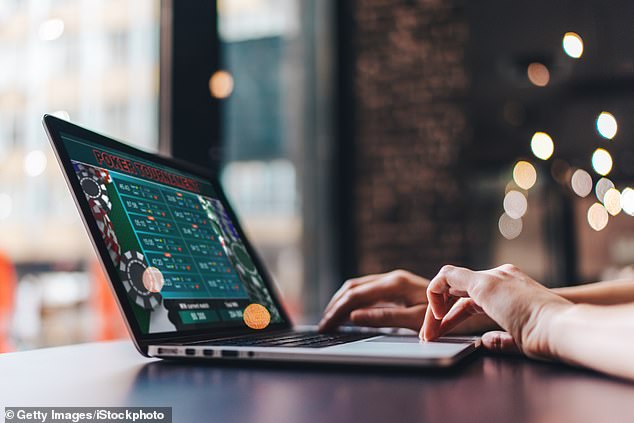 Pippa Longley, 39, from Leeds, stopped gambling a year ago, but is still paying off high-interest loans of over £5,000 (file image)

A spokesperson for the Betting and Gaming Council, the body representing the regulated gambling industry, told the Mail: ‘Our members encourage customers to set deposit limits to control their spending, while they must also adhere to strict rules on how they advertise their products.

‘Customers who think they may be experiencing problems can self-exclude from online sites by signing up to Gamstop which prevents them betting with all UK-regulated operators and stops all marketing and promotions.’

The Council says new rules prevent social-media gambling adverts being targeted at under 25s, ‘unless the website can prove they are accurately reaching over-18s’ and that since the first lockdown began, the number of safer gambling messages on websites, put there by the gambling companies, has more than doubled.

It also adds that ‘the number of direct interventions [by gambling companies] where a player has been spending more time or money betting than before Covid has increased by 25 per cent,’ and that ‘at least 20 per cent of their TV and radio ads are safer gambling messages’.

Pippa Longley stopped gambling a year ago, but is still paying off high-interest loans of over £5,000.

Pippa, 39, from Leeds, who has two children aged 14 and ten with her husband Robert, a labourer, started gambling on bingo sites eight years ago to deal with stress from her nursing career.

Now a senior nursing support worker on a £65,000 salary, she became adept at lying to her husband. And it wasn’t until last year, when she realised she could block gambling websites on her devices with Gamstop, that she quit.

‘I’m blocked for five years and can’t change that,’ says Pippa. But the urge to gamble is still there — and heightened during lockdown. ‘If I could, I’d think, “I’ll just put £20 on.”’