Home » Lifestyle » Fossils reveal journey of a mother and child 13,000 years ago

Fossils reveal journey of a mother and child 13,000 years ago

The remarkable prehistoric journey of a terrified mother and her toddler across a muddy riverbed frequented by ancient predators has been unearthed by scientists.

Fossilised footprints show a small adult, most likely a woman but possibly a teenage male, trekking for almost a mile across the hunter hotbed 13,000 years ago.

Analysis shows the adult scurried across sludgy terrain at a rapid pace while carrying a two-year-old child.

The pair, likely aware of the danger they were in, never deviated from a perfectly straight path, so as to minimise their time exposed.

The remarkable prehistoric journey of a terrified mother and her toddler across a muddy riverbed frequented by ancient predators has been unearthed by scientists. Pictured, an artist’s impression of what the treacherous journey may have looked like 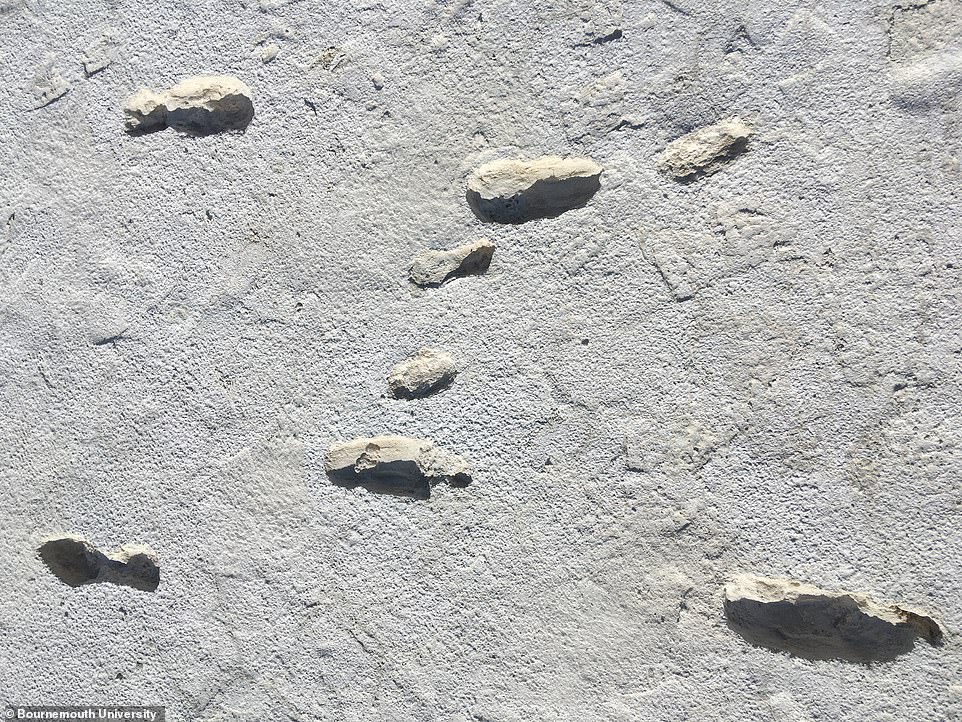 For most of the trip, there is one set of footprints, those of the adult. But in some locations these are joined by a series of small child tracks (pictured)

The 1.5 km (0.9 mile) long walk was discovered in New Mexico and also shows the human route was later crossed by a mammoth and a giant sloth. It is the longest known trackway of early-human footprints ever found.

Separate analysis of the playa, a dried up lakebed, reveals the area was also popular with sabre-toothed cats, dire wolves, bison and camels.

During this period of history, around 13,000 years ago, humans hunted some of these animals, and were hunted by others, making the journey extremely hazardous.

According to the researchers who discovered and analysed the tracks, the mother knew this too, hence her rapid pace.

In an article for The Conversation, Professor Matthew Robert Bennett and Professor Sally Christine Reynolds from Bournemouth University write: ‘The ground was wet and slick with mud and they were walking at speed, which would have been exhausting.

The researchers know the woman and her child were in a rush because of the shape and depth of the footprints, which were scanned in 3D.

For most of the trip, there is one set of footprints, those of the adult. But in some locations these are joined by a series of small child tracks.

The researchers speculate that this may have been when the adult, who was carrying the toddler, set the youngster down to either change hips or have a rest.

Resting in this area would have been risky, as the tracks reveal it was rife with dangerous beasts, all capable of killing the travellers.

The researchers say they do not know where the pair were heading as the tracks inevitably expired.

Wherever the pair were going, the adult returned along the same path a few hours later, but this time she was alone.

Without the need to lug around an inevitably irritable child, the mother had an easier time passing through this hostile land.

‘The trackway tells a remarkable story. What was this individual doing alone and with a child out on the playa, moving with haste?’ the researchers say in The Conversation.

‘Clearly it speaks to social organisation, they knew their destination and were assured of a friendly reception.

‘Was the child sick? Or was it being returned to its mother? Did a rainstorm quickly come in catching a mother and child off guard? 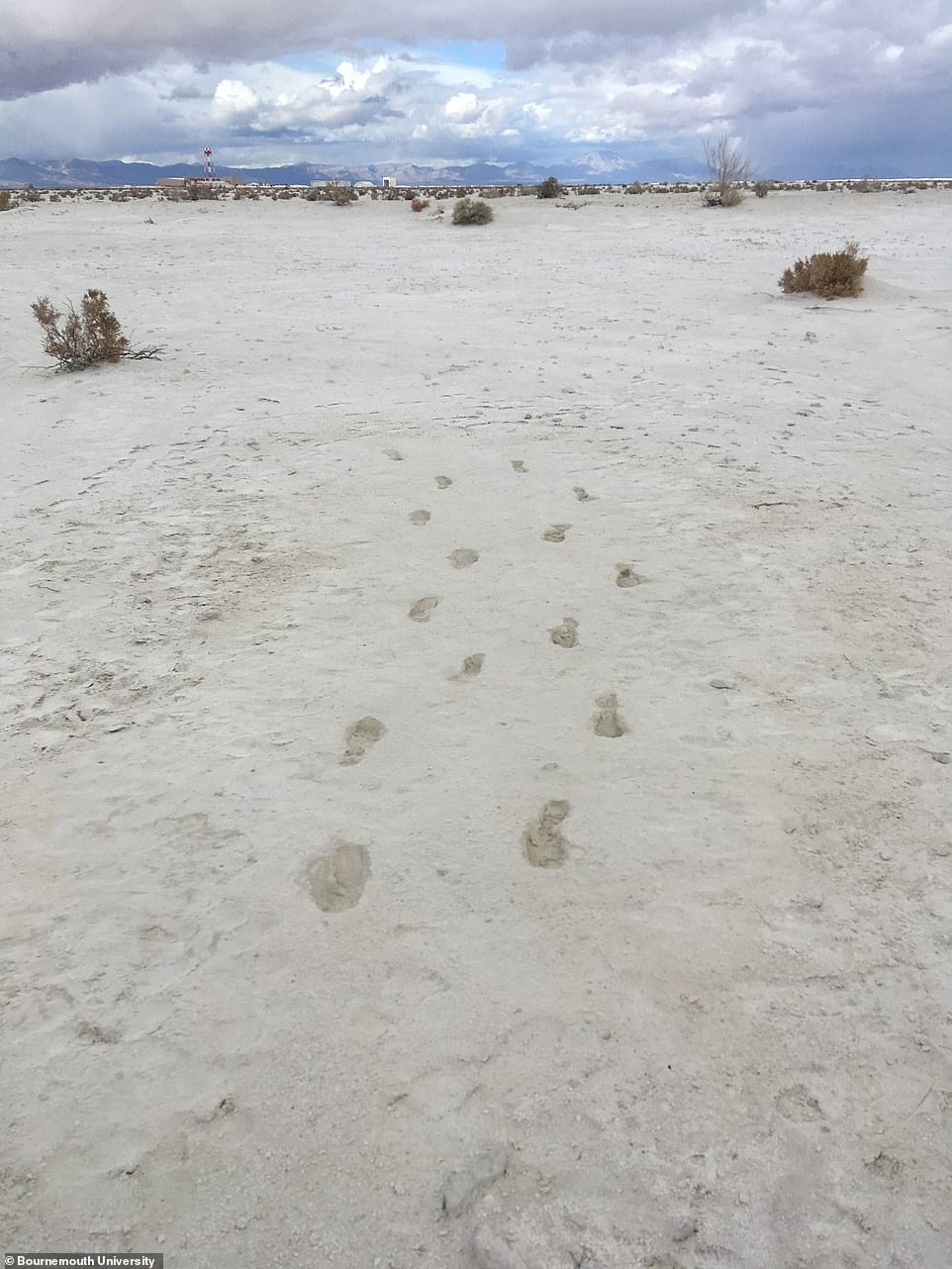 The 1.5 km (0.9 mile) long walk was discovered in New Mexico and also shows the human route was later crossed by a mammoth and a giant sloth 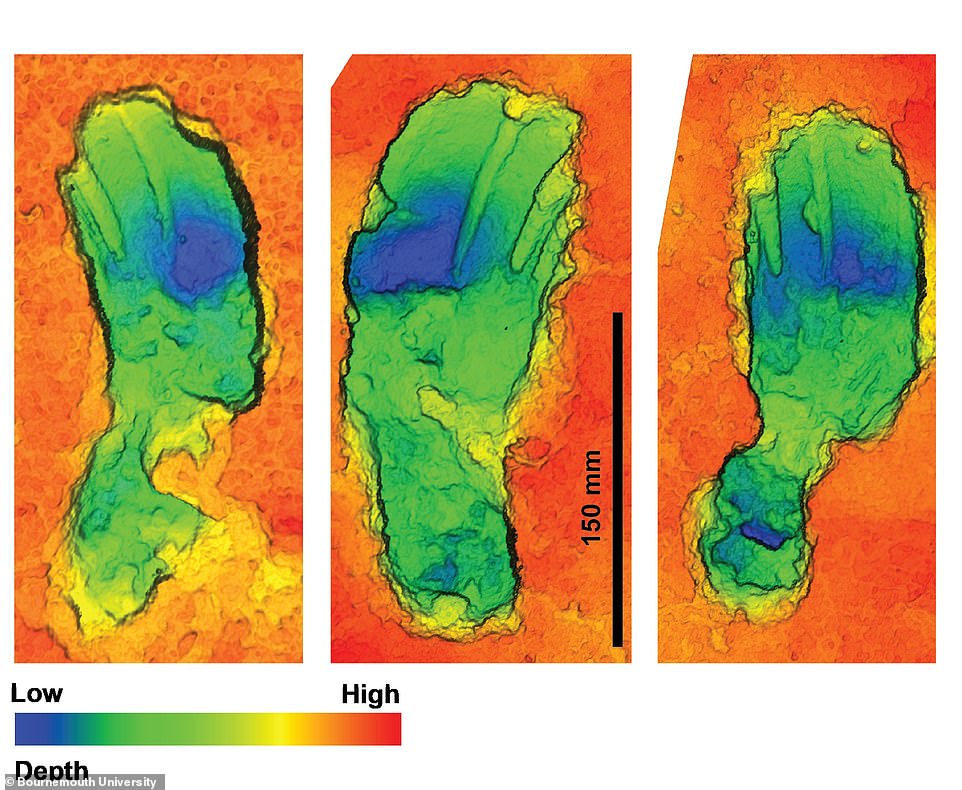 The researchers know the woman and her child were in a rush because of the shape and depth of the footprints, which were scanned in 3D (pictured) 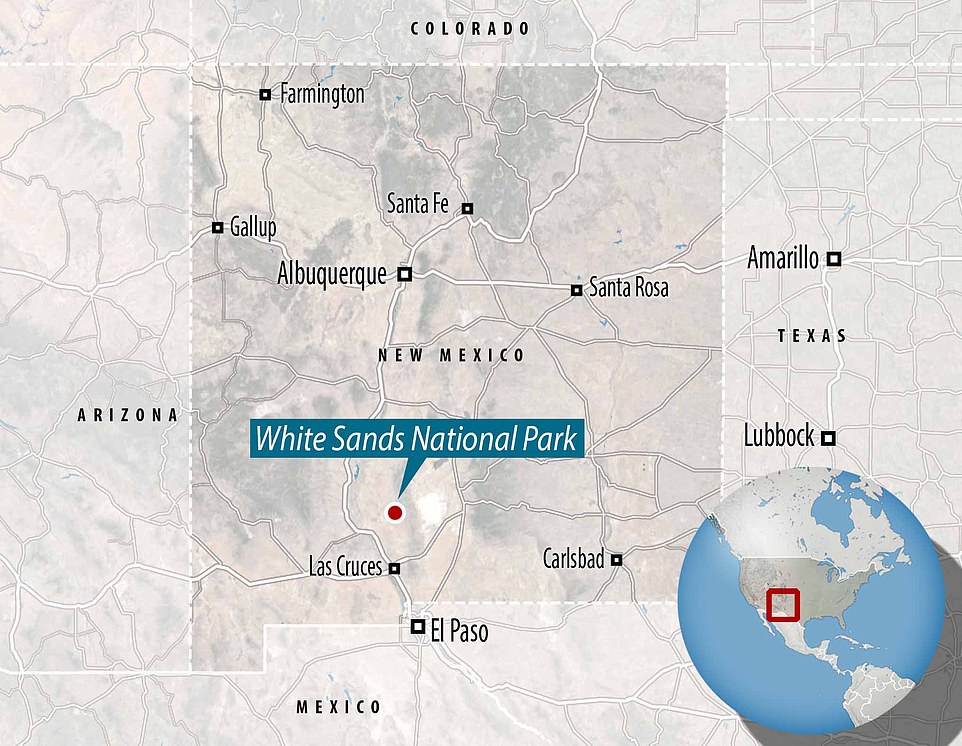 ‘We have no way of knowing and it is easy to give way to speculation for which we have little evidence.

‘What we can say is that the woman is likely to have been uncomfortable on that hostile landscape, but was prepared to make the journey anyway.’

In the brief period between the adult going out and returning, their chosen path was crossed by now extinct megafauna.

Enormous beasts roamed the plains of the Americas and tracks of these animals helped the academics date the event.

‘Between the outward and return journeys, a sloth and a mammoth crossed the outward trackway,’ the researchers say.

‘The footprints of the return journey in turn cross those animal tracks. The sloth tracks show awareness of the human passage.’

‘As the animal approached the trackway, it appears to have reared-up on its hind legs to catch the scent – pausing by turning and trampling the human tracks before dropping to all fours and making off. It was aware of the danger.

‘In contrast, the mammoth tracks, at one site made by a large bull, cross the human trackway without deviation, most likely not having noticed the humans.’

The research is published in Quaternary Science Reviews.

Ancient footprints found in Saudi Arabia reveal how humans may have followed lakes and rivers to migrate from Africa to Eurasia 120,000 years ago

Archaeologists have uncovered the earliest human footprints ever found in the Arabian peninsula.

They are believed to be around 120,000 years old and lie at the site of an ancient lake in the modern-day Nefud Desert.

This region was crucial in the migration of humans out of Africa and into the rest of the world, serving as the gateway between Africa and Eurasia.

It is thought humans appeared in Africa around 300,000 years ago and did not reach the Levant for more than 150,000 years.

Experts previously believed humans made this journey along coastal routes, but the researchers behind the latest finding believe this may not necessarily be true.

They theorise that instead of following the ocean, humans may have taken inland routes and followed lakes and rivers.

Alongside the human marks are 233 fossils and 369 animal tracks, including 44 elephant and 107 camel footprints, indicating the lake was a popular watering hole.

‘The presence of large animals such as elephants and hippos, together with open grasslands and large water resources, may have made northern Arabia a particularly attractive place to humans moving between Africa and Eurasia,’ says the study’s senior author Michael Petraglia of the Max Planck Institute.

Today, the Arabian Peninsula is characterised by vast, arid deserts that would have been inhospitable to early people and the animals they hunted down.

But research over the last decade has shown this wasn’t always the case and it would have been lush and humid in a period known as the last interglacial.

Professor Ian Candy from Royal Holloway, co-author of the study, says this period of time is ‘an important moment in human prehistory’.