From the Archives, 1988: Margaret Thatcher jostled, pushed in Melbourne

Senior police last night criticised British authorities over yesterday’s walk in the Bourke Street Mall by the British Prime Minister, Mrs Thatcher, during which she was jostled and pushed by about 300 people. 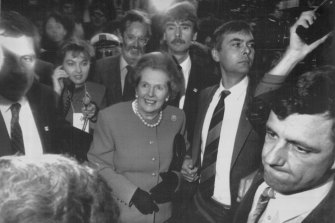 Demonstrators carrying placards and chanting “Thatcher out” mingled with supporters and shoppers as Mrs Thatcher walked along the mall about 5 pm.

Uniformed police and security men surrounded Mrs Thatcher to provide an escort, but struggled to forge a path through the crowd. When Mrs Thatcher arrived at the Walk Arcade, police managed to block the entrance partially and keep some of the demonstrators out.

The demonstrators, from several socialist and gay-rights groups, were protesting at recent British Government policies, which they claimed discriminated against homosexuals.

Senior police last night defended the security arrangements for Mrs Thatcher’s city walk, but said they would have preferred that it did not take place.

The assistant commissioner (operations), Mr Frank Green, said the walk along the mall had been “at the insistence of British authorities, and against the recommendations of the Victorian Government and police.”

Mr Green said British authorities had insisted on an “informal walk”, and this was why no barricades had been erected in the mall.

He said that at 5.15 pm on a working day in the centre of the city such an “informal walk” was bound to create difficulties.

Last night, two people were arrested outside the Victorian Arts Centre where Mrs Thatcher attended a formal dinner. Police said one of the men was carrying a knife when arrested.

Mounted police and uniformed police stood behind barriers erected outside the Arts Centre. Mrs Thatcher arrived about 7.30 pm to a barrage of verbal abuse from demonstrators, who were kept at a safe distance.