Josh Warrington was boxing like a dream when his rematch with Mauricio Lara was halted at the end of two rounds in Leeds on Saturday night.

There was confusion in the ring, looks of despair from both corners, the referee, Steve Gray, anxiously hovered over Lara’s team as a ringside doctor examined a two-inch gash that had replaced the eyebrow over his left eye. It was too deep to repair in the corner. The fight was over.

A few moments later, as Michael Buffer, splendid in a crushed velvet jacket, took the microphone there was suddenly, and for the first time, a silence in the chill Yorkshire night. The party mood flattened inside Headingley rugby league ground; it was so sudden that it felt like the volume had been switched off, the glowing fell mute. They waited on both sides of the ropes, a certain dread swirled above their heads.

Buffer cleared his throat, a pin dropped somewhere and they stood in utter silence. It was a crowd of 20,000 and, like the two fighters, they were just warming up and getting ready for something very special. And then the bad news tumbled out.

The fight was over, no winner, no loser and it was declared a technical draw. The cut, the referee correctly said, was caused by an accidental clash of heads and because a minimum of four rounds had not been completed, the scores are an irrelevance; the only end was the unsatisfactory one that even the great Buffer could not sugarcoat. Lara shrugged, Warrington was livid. The crowd vanished, it was like magic and at ringside, unable to look up, Warrington was crushed. He had not lost, but it made no difference – he had to win.

“I could cry,” he said. And it looked like he had. It looked like he had done a lot crying in hard nights since being knocked out by Lara in February. He admits to the demon visits each night, a clash with Lara each time he closes his eyes.

In February, Lara had dropped and stopped Warrington. The rematch was created for revenge, but the threat of a repeat was very real. There was fear in the air all week, but on the night news filtered out to ringside that Warrington was in a great place. He was a changed man to the hyped, drained and confused fighter back in February.

Warrington dominated the two completed rounds, hands high, eyes alert, smart moves, caution and sense. Lara missed, smiled, lunged, laughed and was picked off. It was brilliant from Warrington, the crowd in full voice, Buffer beaming at ringside and super fights, back at Elland Road, suddenly looking possible once again.

And then, in round two, the heads crashed and clashed. Not once, but twice. Lara winced, hopped in pain and complained. It was an accident both times. Warrington dismissed the complaints, kept his cool and connected with sharp punches on the cut over the left eye. The bell sounded, the place was raucous. Warrington was flying. It’s a basic business the one I follow, a business where men and women get exposed and hurt and beat in pursuit of sporting excellence. I make no apologies for the brutal facts; Warrington had a man close to defeat, a man of just 23, not much more than a boy and he was damaged, left vulnerable with a terrible cut and everybody was delighted. What a business.

At the bell to end round two, the action in the ring switched from the boxers to the cornermen, the doctor and finally the referee. It was not ideal, but we have boundaries for a reason in the old fight game.

Lara and Warrington will do it all again. “I have to beat him, I have to,” muttered Warrington at the end as he finally left ringside. “I was enjoying that; I can’t believe I let him knock me out. I just can’t believe it.” 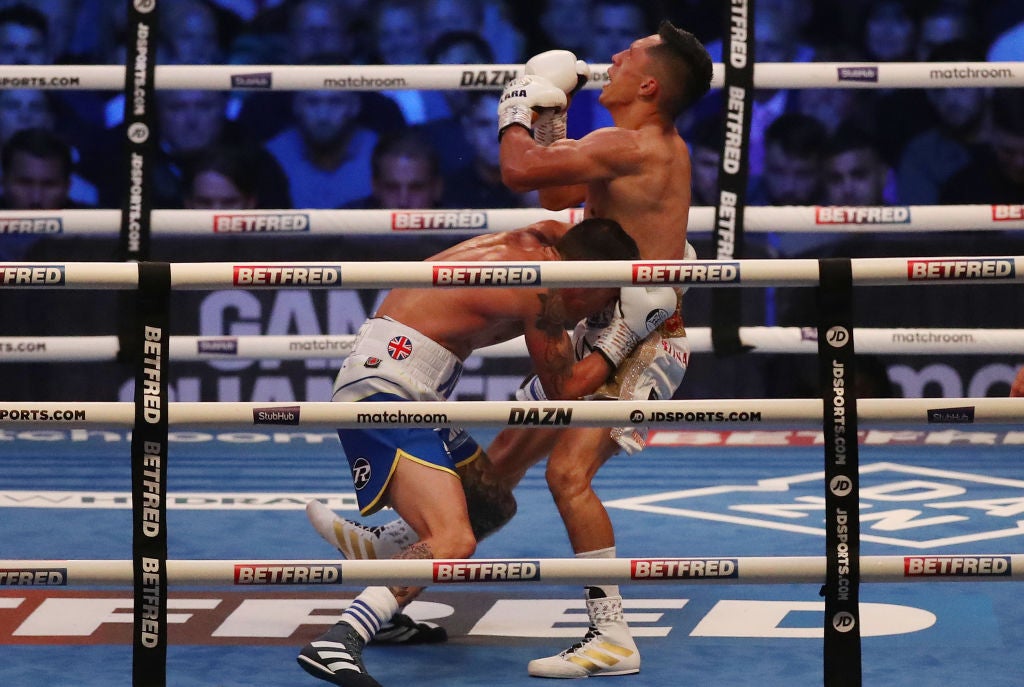 Obviously, a lot can happen in a fight scheduled for twelve rounds that suddenly ends after two rounds. The fight was poised, sure, but Warrington’s concentration was brilliant, his timing perfect and it looked like Lara had taken the fight lightly. It was really starting to get interesting and from the ring canvas, a rare broadcasting position in the modern game, I could sense Lara’s frustration. I could also see Warrington’s intensity – it was a wonderful contrast. It is possible that Lara had the best result on Saturday night.

The cut will take months to heal, there is talk of a fight for Warrington this side of Christmas and then a rematch will take place next year. Warrington lost to Lara because he lacked the necessary motivation, fought carelessly and without respect and that could be an issue again if he fights in December. Will it be enough of a test to pull Warrington away from his desire to beat Lara?

Warrington started the year unbeaten, a world champion, a man in control and demand. He relinquished his title and two weeks later he lost to Lara. The year will, hopefully, end better than it started.

And one night next year we get to do it all again. It will be memorable, a third fight and a return to one of boxing’s grandest questions: Repeat or revenge?