The commander of the Defence response to the pandemic has confirmed an ADF offer to make troops available to strengthen Victoria's hotel quarantine scheme was not taken up by the Andrews government.

Lieutenant General John Frewen, the head of the Defence COVID-19 Taskforce, told a Senate inquiry the same support offered to NSW and Queensland to establish and maintain their hotel quarantine regimes was available to Victoria. 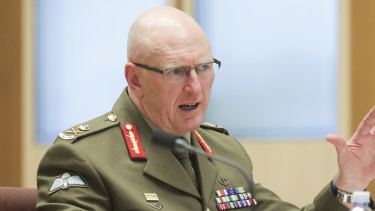 The Lieutenant General's testimony made clear that had Victoria sought ADF assistance on the same scale as NSW, hundreds of personnel could have been mobilised to bolster the state’s quarantine arrangements.

It prompted the Victorian Opposition to renew its call for Premier Daniel Andrews to resign for misleading the public about a crucial element of the deadly hotel quarantine debacle.

Breakouts from two quarantine hotels in Melbourne were identified in scientific evidence presented to the Coate inquiry on Tuesday as the source of nearly all cases in Victoria’s second wave epidemic, now responsible for more than 300 deaths.

Dr Charles Alpren, an epidemiologist with Victoria’s Department of Health and Human Services, told the hotel quarantine inquiry that 90 per cent of infections since late May could be traced to the Rydges Hotel on Swanston.

Subsequent outbreaks at the Stamford Plaza Hotel were responsible for the remainder of second wave cases, Dr Alpren told the hearing. 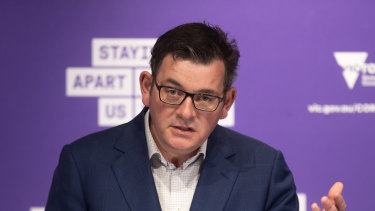 Premier Daniel Andrews has stood by his claim that no ADF help was on offer for hotel quarantine.Credit:Simon Schluter

Lieutenant General Frewen's testimony confirmed a timeline of events published last week by The Age and the Herald setting out the ADF's standing offer to help with hotel quarantine from March 27, the day the National Cabinet agreed to back the mandatory quarantine program.

It contradicted what Mr Andrews said last week when he told a Victorian parliamentary hearing that “ADF support was not on offer’’ for hotel quarantine.

Mr Andrews told the hearing that it was “fundamentally incorrect to assert that there were hundreds of ADF staff on offer and somehow, someone said no’’.

“A decorated officer has confirmed that the ADF did offer Victoria support, including for security in hotel quarantine,’’ Mr O'Brien said.

“This proves that the Premier gave false evidence to the Parliament when he claimed this did not occur. A Premier willing to lie to Victorians can’t be trusted to lead us through this pandemic. It’s time for him to go.”

Mr Andrews said he stood by his previous comments.

Senator Paterson: “To be very clear here, ADF assistance was available to Victoria on an equal basis as every other state throughout this crisis, was it not?”

On the day of Mr Andrews’ appearance before the parliamentary committee, Commissioner Crisp said: "Representatives of the ADF participated in the Operation Soteria planning and coordination meetings on 27 and 28 March 2020. During these discussions I did not seek nor did representatives of the ADF offer assistance as part of the hotel quarantine program.’’

Lieutenant General Frewen told the Senate that on March 27, the ADF “stood to’’ 100 personnel [put them on standby] in Victoria to help establish the mandatory hotel quarantine regime announced that day by Prime Minister Scott Morrison.

“In the PM’s offer, the ADF, it was made plain, would be available to all of the states and territories to help with whatever arrangements were put in place for quarantine and quarantine enforcement,’’ the Lieutenant General said.

Commissioner Crisp referred The Age to his previous statement. "My position has not changed,'' he said.

Lieutenant General Frewen said the ADF offer for help was quickly taken up by the NSW and Queensland governments, with the ADF contingent in NSW swelling to 360 personnel within the first week of the hotel quarantine regime.

Premier Andrews told the parliamentary committee that ADF support in NSW was limited to transporting returned travellers from airports to quarantine hotels.

He said there had been 14 requests by Victoria for ADF assistance since the COVID-19 crisis began. Of these, only one request – a request for aerial surveillance – had been refused. A further two requests were withdrawn by Victoria and 11 had been approved.

Lieutenant General Frewen said one of the withdrawn requests was a June 24 request by Commissioner Crisp for 850 ADF personnel to help with hotel quarantine. He said the ADF was given no explanation for why Commissioner Crisp rescinded the request the next day.