GERMAN Doner Kebab fast food chain plans to open 12 new branches in the UK by the end of the year, creating nearly 500 jobs.

Seven out of the 12 branches have already opened since lockdown, with another five to be opened by the end of December. 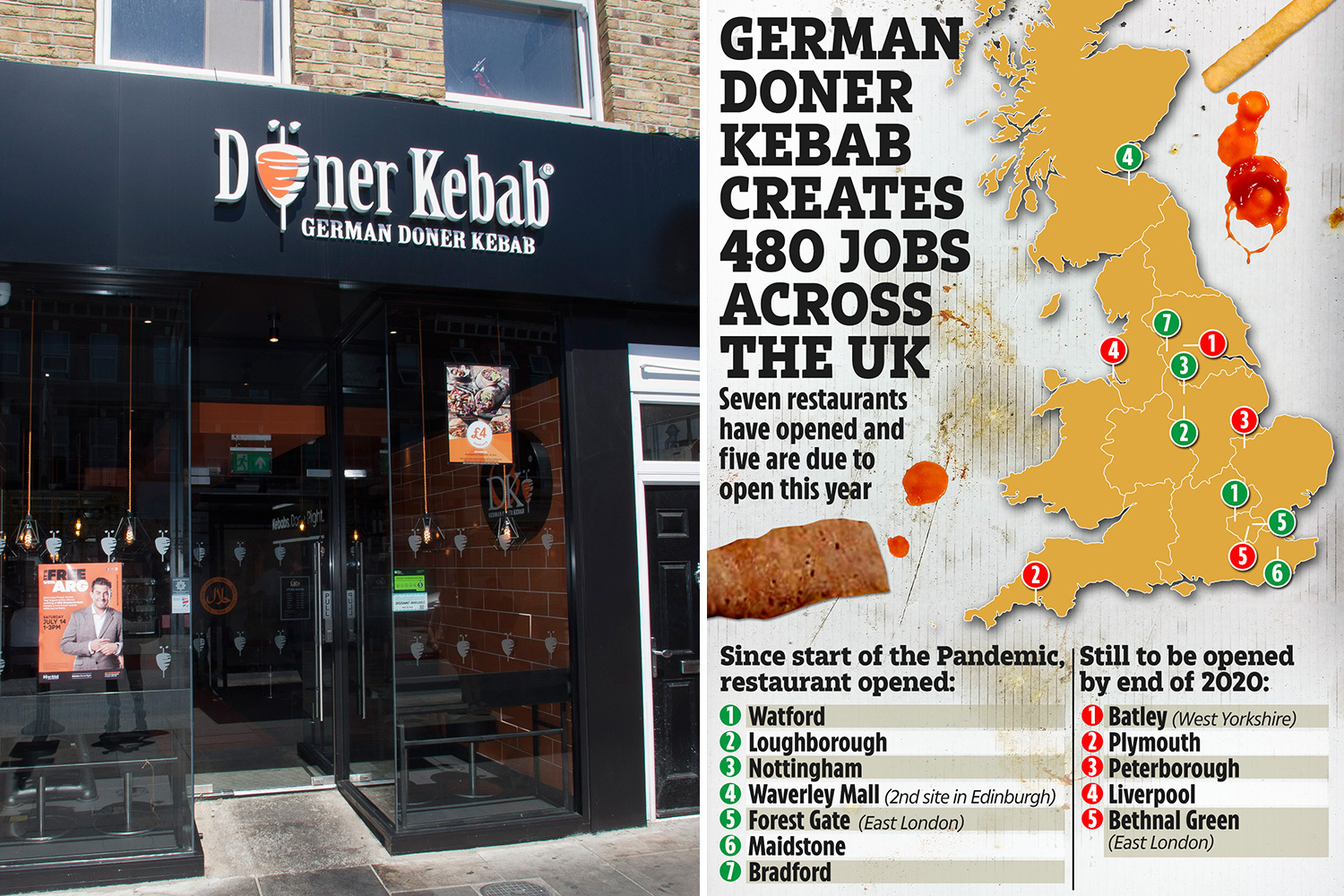 The new restaurants that have recently opened are in Nottingham, Bradford, Maidstone, Watford, Loughborough, Forest Gate, East London and a second branch in Edinburgh.

Watford and Loughborough were opened at the beginning of the year, while last month saw the opening of the Nottingham, Edinburgh and Forest Gate restaurants.

The next five will open in November and December, and are located in Batley, Plymouth, Peterborough, Liverpool and London's Bethnal Green.

A total of 480 jobs have been created thanks to the openings, with around 280 jobs being snapped up so far.

The chain is expanding after the business saw an uptick as a result of the pandemic.

The casual restaurant stayed open throughout lockdown and saw a 46% rise in sales in August thanks to the Chancellor’s Eat Out to Help Out scheme.

The chain boosted sales by partnering with delivery services Deliveroo, Uber Eats and Just Eats to deliver to customers who were self isolating.

It comes as the rest of the hospitality industry has faced choppy waters during the pandemic.

Hundreds of high street stores and restaurants have closed or are at risk of closing after a drop in footfall from shoppers,

And today, experts have warned more than a million jobs in hospitality and retail could be lost by the end of this year.

Daniel Bunce, UK and Europe managing director at the chain, told The Sun they hope to open another 60 branches the UK next year, which will create another 2,500 jobs.

It’s also expanding internationally too, with seven sites in Sweden, two in Canada and one in Saudi Arabian capital of Riyadh, which is lined up to open next year.

Mr Bunce told The Sun: “It has been challenging, despite our success. There’s no winners in any pandemic. It’s a shame, we don’t want a weaker high street.

“From our point of view we’re an agile business. We’re a fast-casual restaurant but very quickly adapted our model into a delivery business.

“After talking to our franchise community, we decided to not close when everyone else was closing in March and April. We decided it was beneficial to carry on supporting our communities.”

The chain was founded in Germany in 1989 and later launched in the UK in 2016 by United Brands as a franchise.

It sells a variety of different foods centred around the doner kebab, including wraps, quesadillas and burgers.

German Doner Kebab has 47 branches in the UK and employs more than 1,500 staff in total.

If you want to apply for a job, you can visit German Doner Kebab's website.

We've rounded up other companies that are currently recruiting.

Here's some tools you can use for free to help make your CV stand out.

And here's everything you need to know about the job support scheme.