Female students are four times less likely to enrol in a maths-heavy subject like physics or engineering than boys, a study found.

This is despite evidence that girls demonstrate a ‘higher degree of competence’ for those subjects while they are at school, according to education policy experts.

Researchers from New York University studied data from almost 6,000 high school students over seven years – from the start of high school into college.

The lowest performing male maths students at school are just as likely to enrol on a maths-heavy degree as the highest performing female student, they found.

The research shows that grades are not the main barrier to girls enrolling on maths heavy courses at university, according to lead author Joseph R. Cimpian.

He said efforts to dismantle barriers to women enrolling on maths-intensive courses at university would raise the overall quality of students and the eventual workforce. 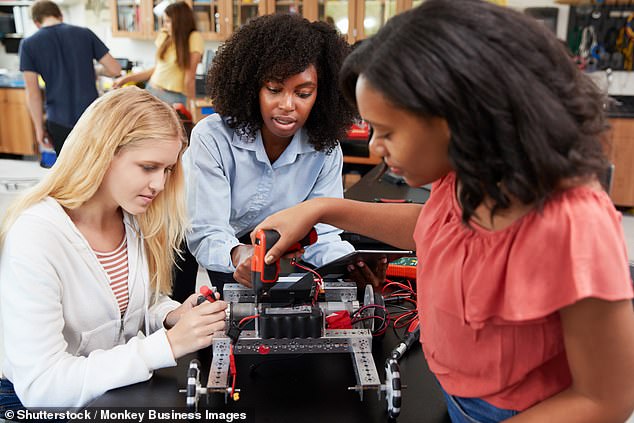 Some subjects have a one to one male and female ratio, but university courses in physics, engineering and computer science have a much wider gender gap. Stock image

Some subjects have a one to one male and female ratio, but university courses in physics, engineering and computer science have a much wider gender gap.

Boosting confidence in scientific abilities among girls at a younger age, and encouraging STEM careers will help to some extent, Cimpian said.

However, overall measures aimed at encouraging more girls into maths-heavy STEM subjects ‘need to be more nuanced and targeted to the individual’, he added.

‘Physics, engineering and computer science fields are differentially attracting and retaining lower-achieving males, resulting in women being underrepresented in these majors,’ he said.

This is despite them having demonstrated a higher STEM competence and academic achievement than their male counterparts, the authors said.

When the researchers ranked students by their high-school math and science achievement, they noticed that male students in the 1st percentile were majoring in maths heavy subjects at the same rate as females in the 80th percentile.

While men and women are now nearly equally represented in biology, chemistry, mathematics and many other STEM college majors, men continue to outnumber women 4-to-1 in the fields of physics, engineering and computer science (PECS)

The researchers also reviewed the data for students who did not intend to major in PECS fields, but later decided to.

The rich dataset the researchers used was collected by the US Department of Education, and it contained measures of many factors previously linked to the gender gap in STEM.

The NYU team tested whether an extensive set of factors could explain the gender gap equally well among high, average, and low achieving students. 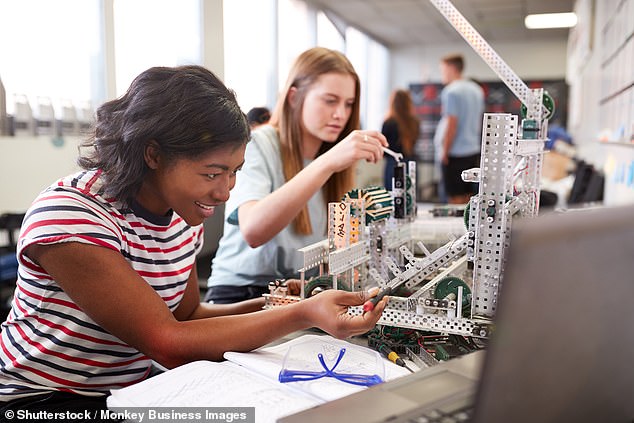 Researchers claim that efforts to dismantle barriers to women enrolling on maths-intensive courses at university would raise the overall quality of students and the eventual workforce. Stock image

The gender gap in PECS among highest achievers could be explained by other factors such as career aspirations and confidene in their abilities in science.

However, these same factors could not explain the higher rates of low-achieving men in these fields, said Cimpian.

This new work suggests that interventions to improve gender equity need to become more nuanced with respect to student achievement.

‘Our results suggest that boosting STEM confidence and earlier career aspirations might raise the numbers of high-achieving women in PECS,’ said Cimpian.

He said those same interventions were less likely to work for average and lower achieving girls – who weren’t going in to STEM despite having the same grades as male counterparts who were enrolling on these course.

‘Something beyond all these student factors is drawing low-achieving men to these fields,’ said Cimpian.

‘This new evidence, combined with emerging literature on male-favoring cultures that deter women in PECS, suggests that efforts to dismantle barriers to women in these fields would raise overall quality of students,’ continued Cimpian.

The research has been published in the journal Science.