Google feature lets you search for a song by humming it

Song stuck in your head? New Google Assistant feature lets you identify a track by simply humming or whistling the tune – but does it really work?

Google has launched a new feature for its smart voice ‘Assistant’ that lets you identify a song by simply humming, whistling or singing the tune.

The feature, which is available on smartphones and smart speakers that use Google Assistant, uses machine learning to identify potential song matches.

Users just need to tap the microphone on the search bar on the Google Assistant app and say ‘what’s this song’ or address their smart speakers by saying ‘Hey Google, what’s this song?’ before reciting it to the best of their ability.

Without lyrics or even a perfect-pitch performance, the new tool will return potential matches and help the user identify the song that’s been stuck in their head.

In MailOnline’s tests, the technology successfully identified 60 per cent of the songs hummed, sang or whistled into the Google Assistant mobile app.

Google said the new feature is currently available in English on iOS, and in more than 20 languages on Android, and plans to expand this to more languages in the future. 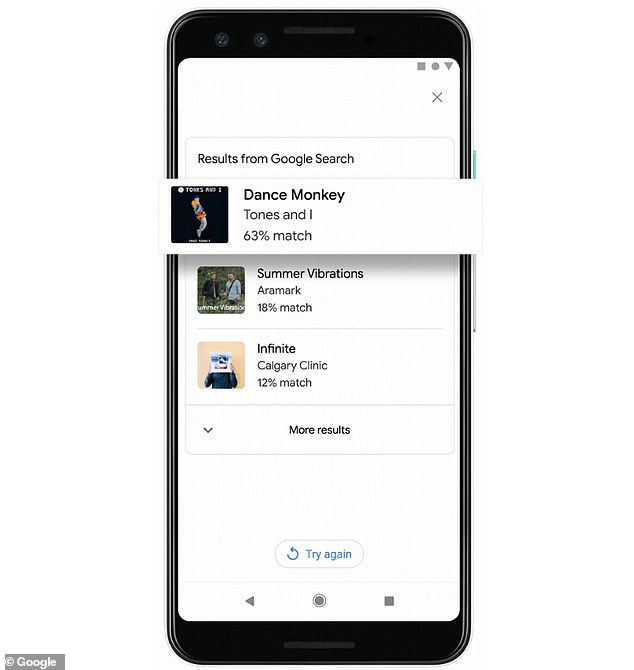 Google Assistant will recognise Tones and I’s Dance Monkey whether it was sung, whistled, or hummed. The machine learning models recognise the melody of the studio-recorded version of the song, which are used to match it with a person’s hummed audio

The technology giant revealed the new feature at its Search On virtual event, which is mainly used to announce updates to its search engine, which is the most used in the world.

‘We all know how frustrating it is when you can’t remember the name of a song or any of the words but the tune is stuck in your head,’ Google said in a blog post.

‘Google can now help you figure it out – no lyrics, artist name or perfect pitch required.’

In trials, MailOnline recited 10 songs to Google Assistant, either hummed, sang or whistled.

The technology correctly identified six out of 10 of the songs as the top result, or in one of those cases, the only result.

In another case, when MailOnline hummed Paranoid by Black Sabbath, Google Assistant didn’t return any results and said it didn’t recognise the song.

It also mistook an Arctic Monkeys song for the 1987 smash hit It Must Have Been Love by Roxette and mistook XTC for the band’s 1980s contemporaries The Human League.

WHAT IS MACHINE LEARNING?

Machine learning (ML) is a branch of AI based on the idea that systems can learn from data, identify patterns and make decisions.

ML systems can learn to improve their ability to perform a task without being explicitly programmed to do so.

Such systems can find patterns or trends in sets of data to come to conclusions or help humans make better decisions.

Machine learning systems get more effective over time as they learn.

On their phones, users need to open the latest version of the Google Assistant app and can then tap the microphone icon.

Next, they can either say ‘what’s this song?’ or click the ‘Search a song’ button that appears lower down, before humming, singing or whistling the tune for around 10 to 15 seconds.

With Google Assistant on smart speakers, users can just say ‘Hey Google, what’s this song? before giving their recital.

As the user is humming, a series of vertical lines appear to indicate that Google is listening.

After the user has finished humming, the Google machine learning algorithm helps identify potential song matches and brings them up in its search results.

Google Assistant presents the results while saying ‘That sounds like it could be one of these’.

Google said users don’t need perfect pitch to use the feature, and they’ll see the most likely options based on the audio input – meaning more than one result may appear.

A more accurate rendition from the user is more likely to narrow down the results to just one correct result.

Each search result will come with an estimation of how likely it is that it’s the one users have been trying to identify, expressed as a percentage.

Once the results pop up, users can select a match and explore information on the song and artist, view music videos, find the lyrics or listen to the song on a music app.

Google said each song’s melody is like its fingerprint with its own unique identity. 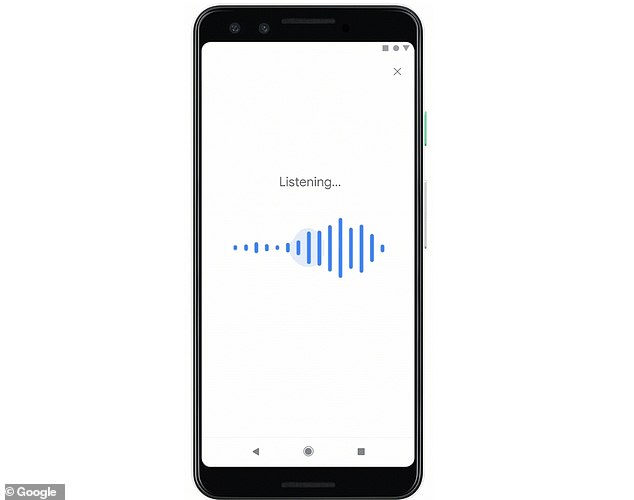 Google is listening to your humming, whistling or terrible singing when the vertical bars appear

‘We’ve built machine learning models that can match your hum, whistle or singing to the right ‘fingerprint”,’ it said.

When users hum, Google’s machine learning models transform the audio into a number-based sequence, which is a representation of the song’s melody.

‘We compare these sequences to thousands of songs from around the world and identify potential matches in real time,’ Google said.

Identifying a song from a hummed melody is not new – US audio recognition firm SoundHound offers an app that can identify a song from humming or music playing nearby.

Successful – returned as the only match

29% Take a While by Yellow Lockdown