Are monsters born or made? And how much blood and gore is too much?

These are the questions sparked by Ratched, a new Netflix series from "super producer" Ryan Murphy which features on the latest episode of the Televisionaries podcast.

The eight-part psychological thriller is a prequel to 1962 novel One Flew Over the Cuckoo's Nest. Ratched features a strong female cast with Sarah Paulson playing the lead character nurse Mildred Ratched. 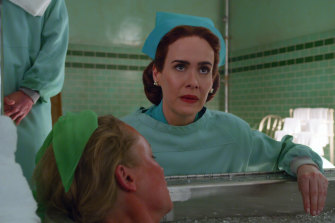 "Ratched feels really like another chapter of that, even though it is ostensibly the back-story for Mildred Ratched," she said.

"Even six episodes in I'm still not entirely sure what her back-story is. It's sort of exploring [the question] 'Are monsters born or made?' But really it's just an excuse for a lot of beautifully filmed, high-concept gore."

Rugendyke wasn't quite so taken with the show

"I was covering my eyes from the two-minute mark," she said.

"Mildred's decision-making is all over the place, there's just no consistency in the way her character was acting. I just found that really jarring."

The Guide and Green Guide critic Debi Enker said despite not being a fan of horror, the show "looks extraordinary".

"At any moment bloody awful things could happen. Throats could be cut, blood could be spurting all over the place," Enker said.

The trio discuss the value of "super producers" such as Murphy, who has a lucrative $US300 million deal with Netflix.

Enker said star writers and producers "not only have a proven track record but [they] bring with them an audience".

"The other advantage of this sort of deal is you're basically poaching the talent from the opposition. Once you sign Ryan Murphy to a five-year deal that means he's not going to be signing with anyone else … you're denying your opposition access to that talent."

Elsewhere in the podcast, the panel indulges in a flashback to medical drama series ER which spanned 15 seasons between 1994 and 2009. They also share what they have been watching recently, with The Comey Rule (Stan) and Hillary (SBS On Demand) among the recommendations in the lead up to the US election.

Listen to the new episode now and don't forget to subscribe to The Televisionaries wherever you listen to your favourite podcasts.