Graziers and greenies unite in ‘drive to save the forest’

This is a story of unlikely alliances: a family of alpine cattle graziers and environmentalists joining forces for the first time in an attempt to stop logging in Victoria’s high country.

The Treasure family – which has grazed cattle in the Dargo high plains area for 140 years – has formed a new relationship with two Gippsland environment groups to oppose logging plans in forests south of Dinner Plain. 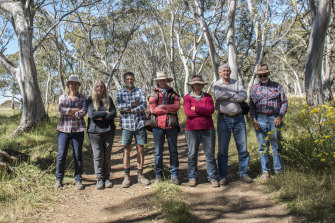 The state government logging agency, VicForests, intends to log a total of 11 “coupes”, or sections, of mature forest in the headwaters of the Little Dargo River, an area of state forest that abuts the Alpine National Park. One coupe has already been logged.

The graziers and environmentalists said this forest is irreplaceable: a swathe of old mountain ash and other tree species that hasn’t burnt since 1939.

It acts as a critical refuge for endangered animals after the vast 2019-20 bushfires in eastern Victoria, they said. More than 320,000 hectares of East Gippsland were charred in these fires.

And they’re concerned that if logging goes ahead, thick sapling regrowth will increase the fire risk and the loss of vegetation will affect water quality and turbidity in the river.

One of the graziers is Christa Treasure, whose great-grandmother Emily Treasure came to the high plains in 1888 with her husband, George, and two children on pack horses, and rode across the alps to Omeo to secure a grazing licence for the Dargo area.

Ms Treasure said she is passionate about this stand of alpine ash because her family has lived in the region for generations.

“What the graziers have in common with conservation groups is our drive to save the forest around the Little Dargo River,” she said.

“The environmentalists are really intelligent, good people. I was in awe of how much they know about the lay of the land.” 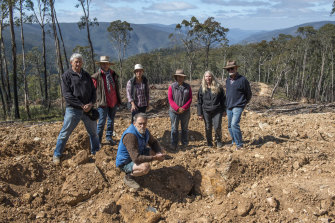 The Treasure family, whose cattle graze near the areas to be logged but not usually in the forest, are also concerned logging will destroy a number of early historic mining and grazier tracks.

“After the ecological catastrophe of the last summer’s bushfires, every patch of unburnt forest is more precious than ever for our remaining native animals,” Ms Crisp said.

In 2019 the Andrews government announced native forest logging would be phased out in Victoria by 2030 and the logging of old-growth forests would cease immediately. 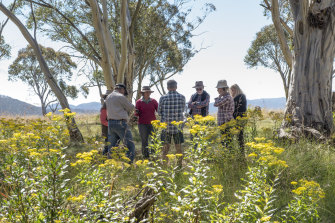 But conservationists are concerned that much of the state’s forests, which don’t qualify as old-growth but are still mature and provide valuable habitat, could be logged in the coming decade.

Ray Anderson, Ms Treasure’s partner, said he first approached the two conservation groups – Gippsland Environment Group and Environment East Gippsland – in desperation because the family was “getting nowhere” with their concerns.

Mr Anderson made it clear they held no animosity towards forestry workers, who were simply doing their jobs. But the damage done was irreparable, he said.

“I’m coming on 73, and I’ll be in front of a bulldozer if logging starts,” Mr Anderson said. “What drives someone who has never had a conviction in his life to do something like that?”

‘I’m coming on 73, and I’ll be in front of a bulldozer if logging starts.’

“We know how important it is for our grandchildren – they will never see these 200-year-old trees in their lives, they’ll be gone.”

In a statement, a VicForests spokesperson said harvesting was essential to restoring wood supply to timber mills that were “significantly impacted by supply constraints during 2020”.

The agency said it was not aware of any evidence to support allegations that its logging activities would degrade water quality or affect rivers downstream.

“Old-growth assessments are also completed at every coupe and, if identified, excluded from harvesting,” it said.

The coupes in question have not yet been scheduled for harvesting, and are yet to be surveyed.

VicForests is under pressure in the courts, facing five different crowdfunded court challenges from community environmental groups. At least 65 Victorian logging coupes are currently subject to legal challenges and cannot be logged.

A spokeswoman for Environment Minister Lily D’Ambrosio said the state’s forestry plan protects all old-growth forests in the state and sets Victoria on a course to phase out native timber harvesting by 2030.