BRIGHTON all but secured Premier League survival for another year – but did it in the way only they can.

Graham Potter’s men have been shocking in front of goal all season and this was no different even though they eventually proved too good for a below-par Leeds. 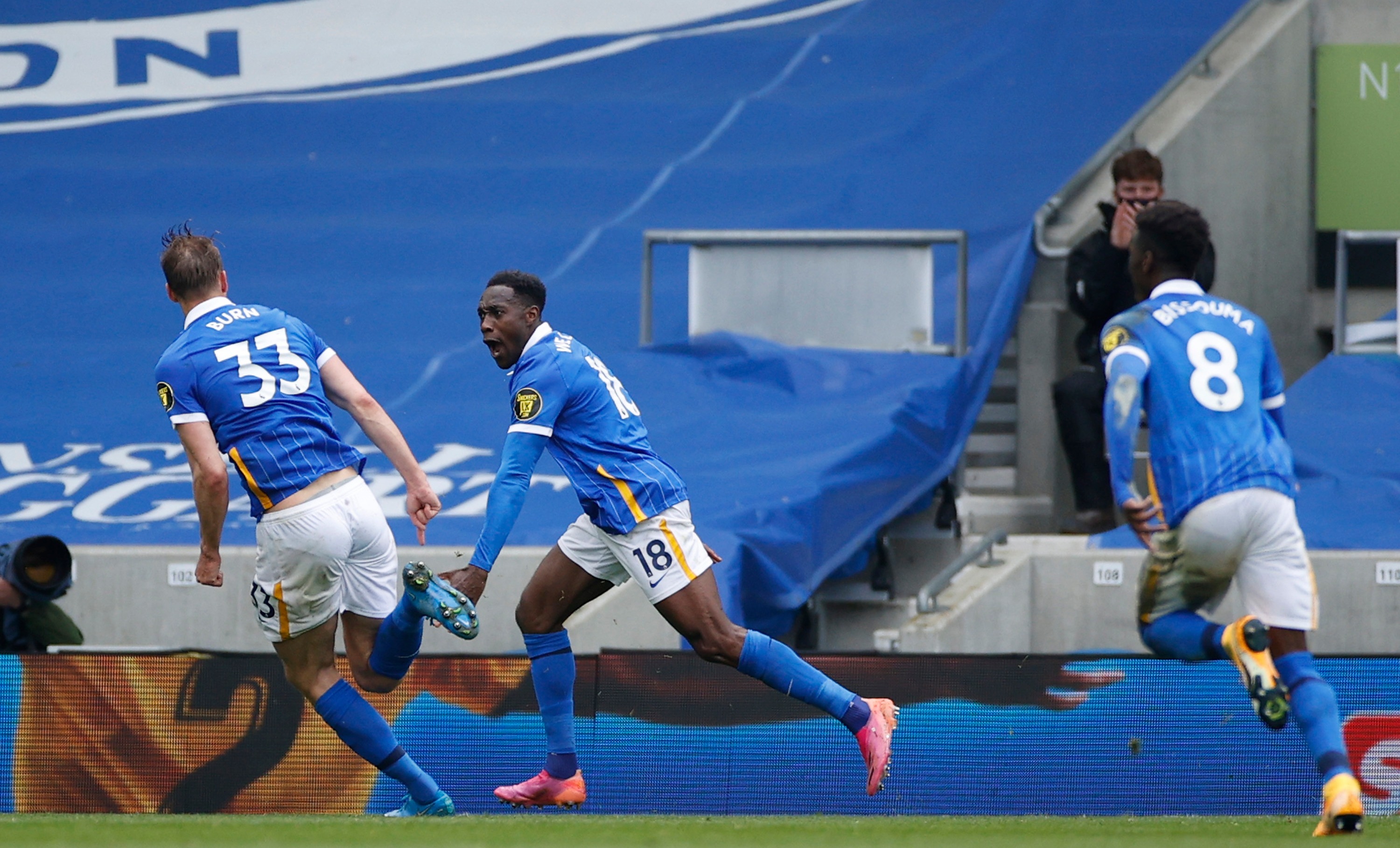 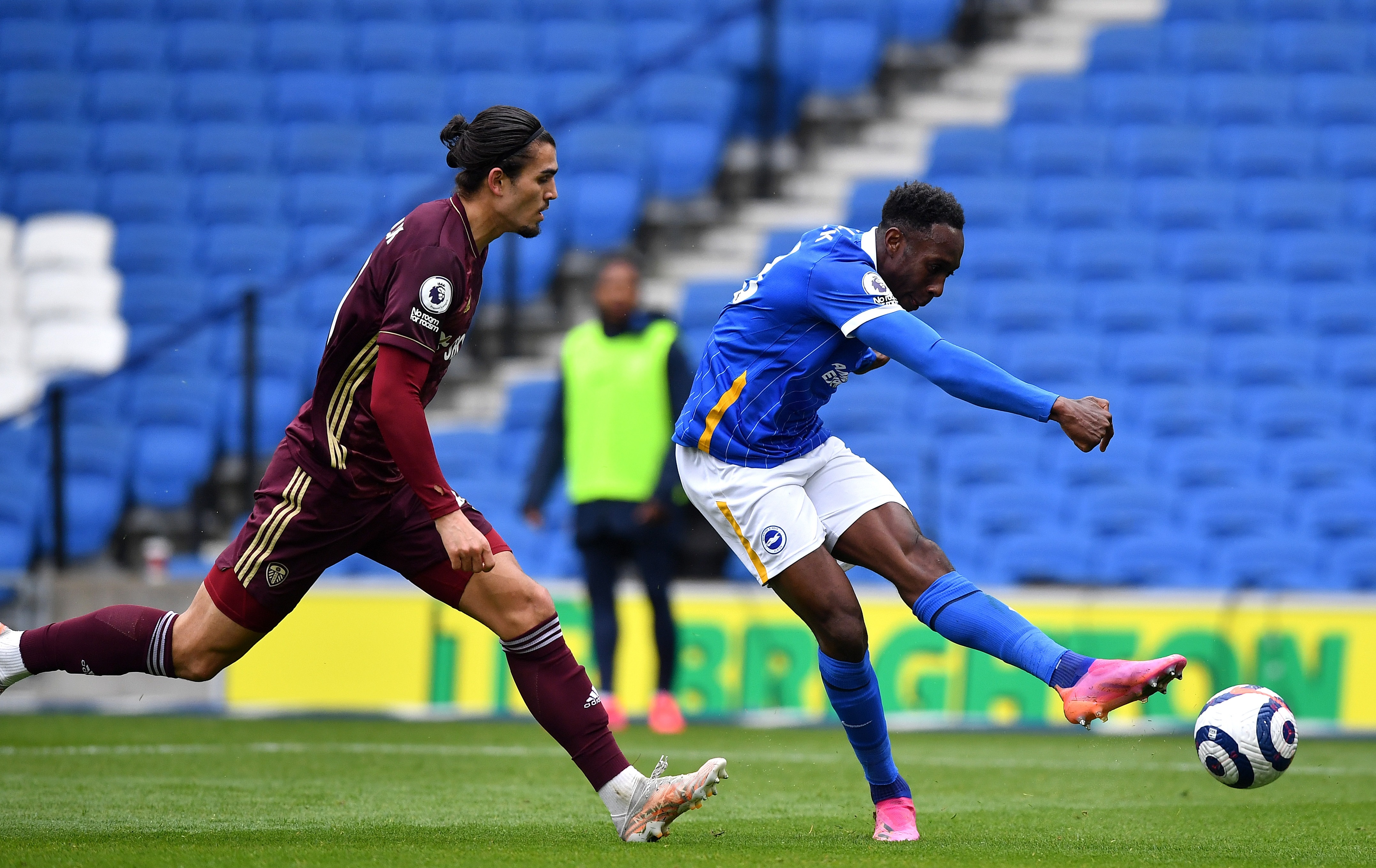 For time and again Potter watched in sheer frustration as his players blew chance after chance to bury Leeds with a second after Pascal Gross had opened the scoring with an early penalty.

This season has seen the Seagulls being made to pay for such wastefulness as they threw away point after point.

But finally they were able to get the job done as Danny Welbeck produced a moment of magic to score the nerve-settling second and ensure even Brighton could not throw this one away.

The win means West Brom are realistically no longer a threat, and barring a miracle run of results from Fulham the Seagulls will not be caught.

But next season Potter is going to have to find a cutting edge for his team, because they cannot keep getting away with their poor finishing.

The way they started made it clear they wanted to make an immediate impression on a Leeds side who, for all their attractive play, can be hugely vulnerable at the back.

So it was twice in the opening ten minutes, when the visitors stood off Leandro Trossard just inside the area to gift a couple of chances, which had to be dealt with smartly by Illan Meslier in goal. 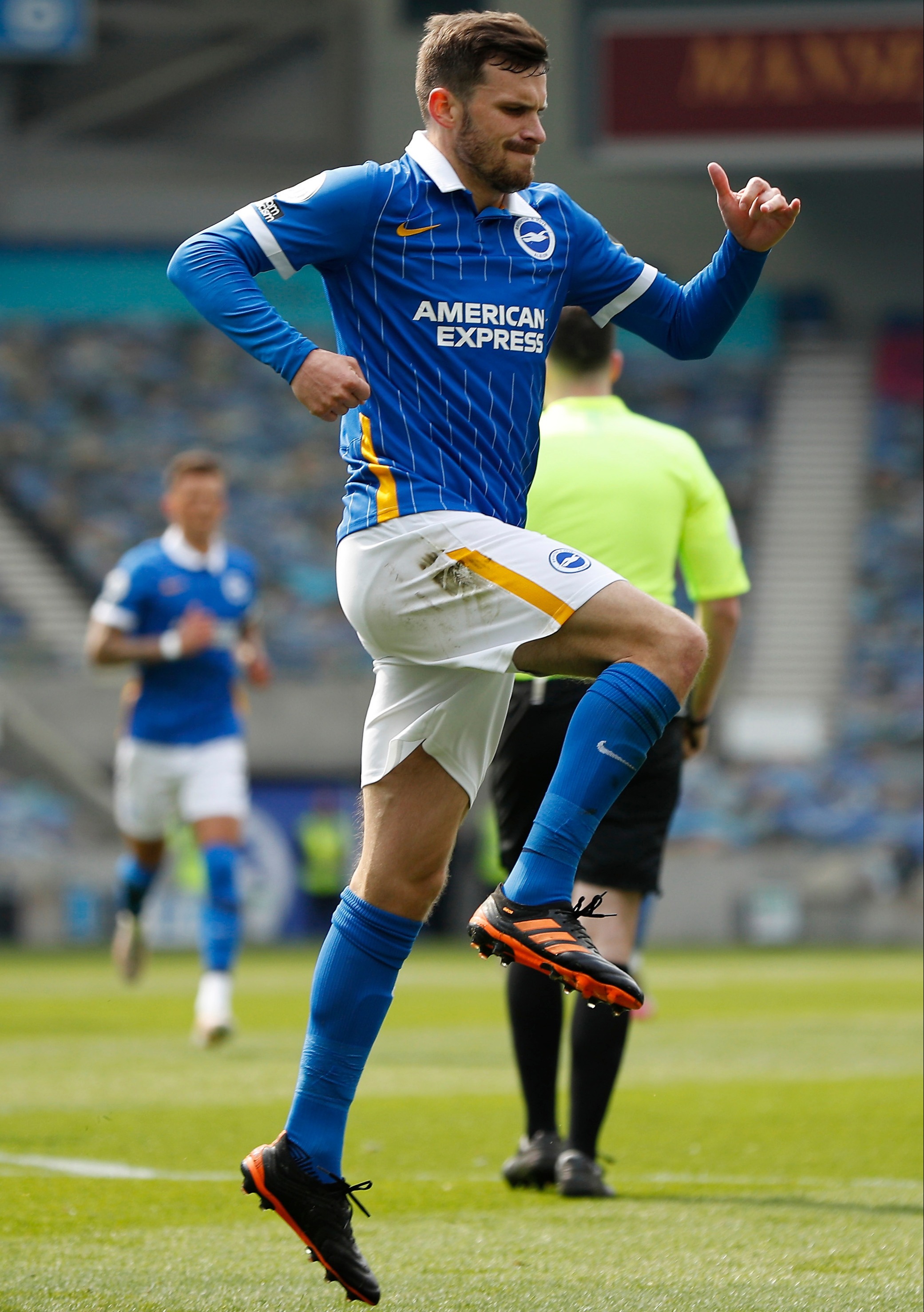 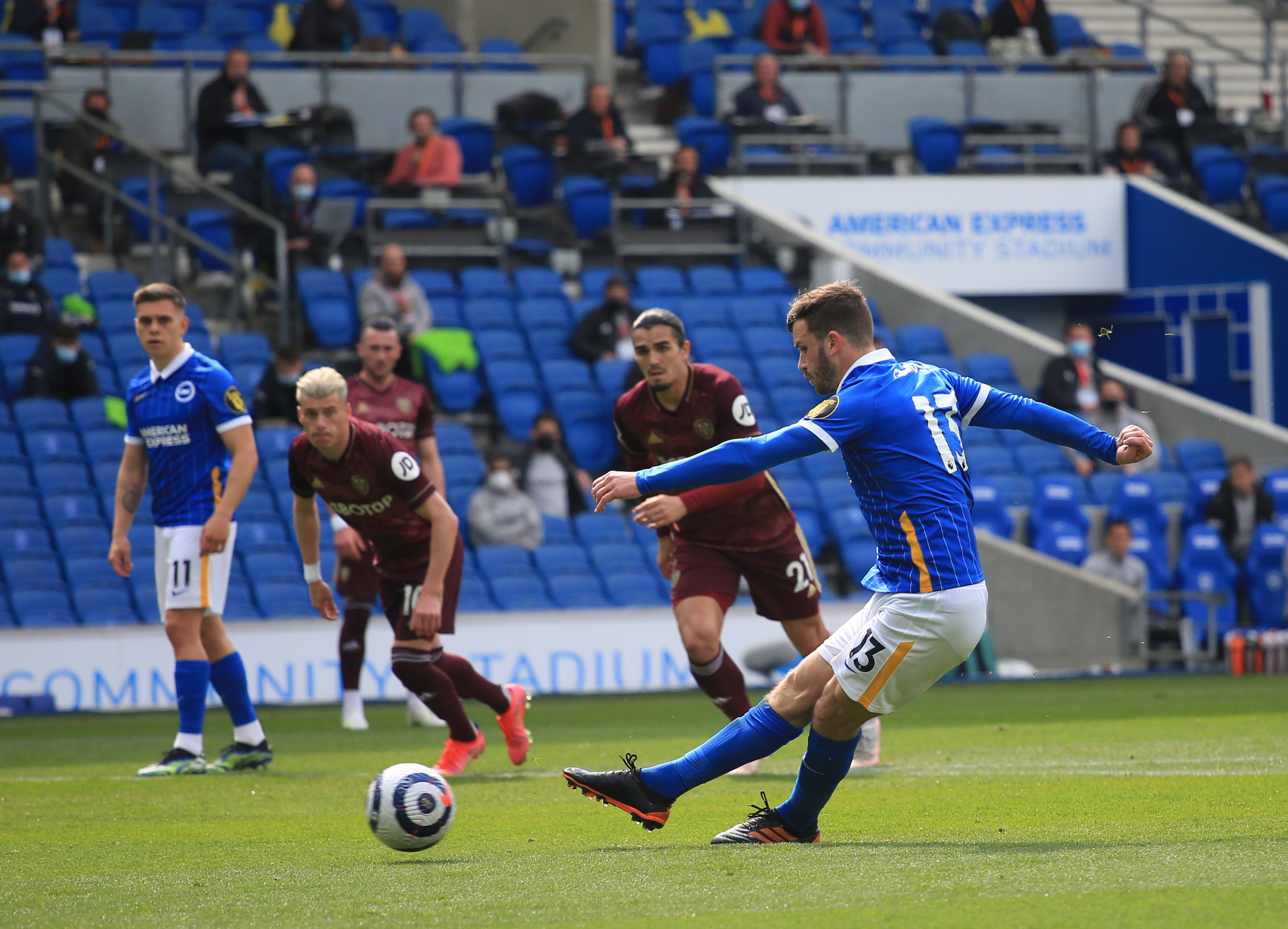 Missing Kalvin Phillips at the base of their midfield, the Yorkshire team struggled to even get close to containing a Brighton side who were faster, sharper and better across the pitch.

And in the 13th minute the breakthrough arrived, as much down to poor defensive play from Leeds as anything else.

Gross mishit his free-kick from way out on the right, but the ball was allowed to roll across the Leeds defence where it reached Welbeck just inside the area.

The forward tried to cut inside towards goal, only to be upended by a clumsy challenge from Ezgjan Alioski and ref Chris Kavanagh had no choice but to point to the spot.

Penalties are hardly a given for Brighton this season, but this time Gross was up to the task and drove his spot-kick low into the bottom corner for the lead.

At that point Leeds had been anonymous, but it was as if falling behind had suddenly turned the switch on for Marcelo Bielsa’s men.

For suddenly they were the sharper side as Brighton sat off for a breather, and the came close to a freak equaliser on 21 minutes when Jack Harrison’s cross was headed against Joel Veltman by Dan Burn – and the Brighton defender only jut recover his ground to stop the own goal.

Harrison then tested Robert Sanchez with a shot as he cut in from the right, before the winger then sent a dipping volley from the other side just across the face of goal. 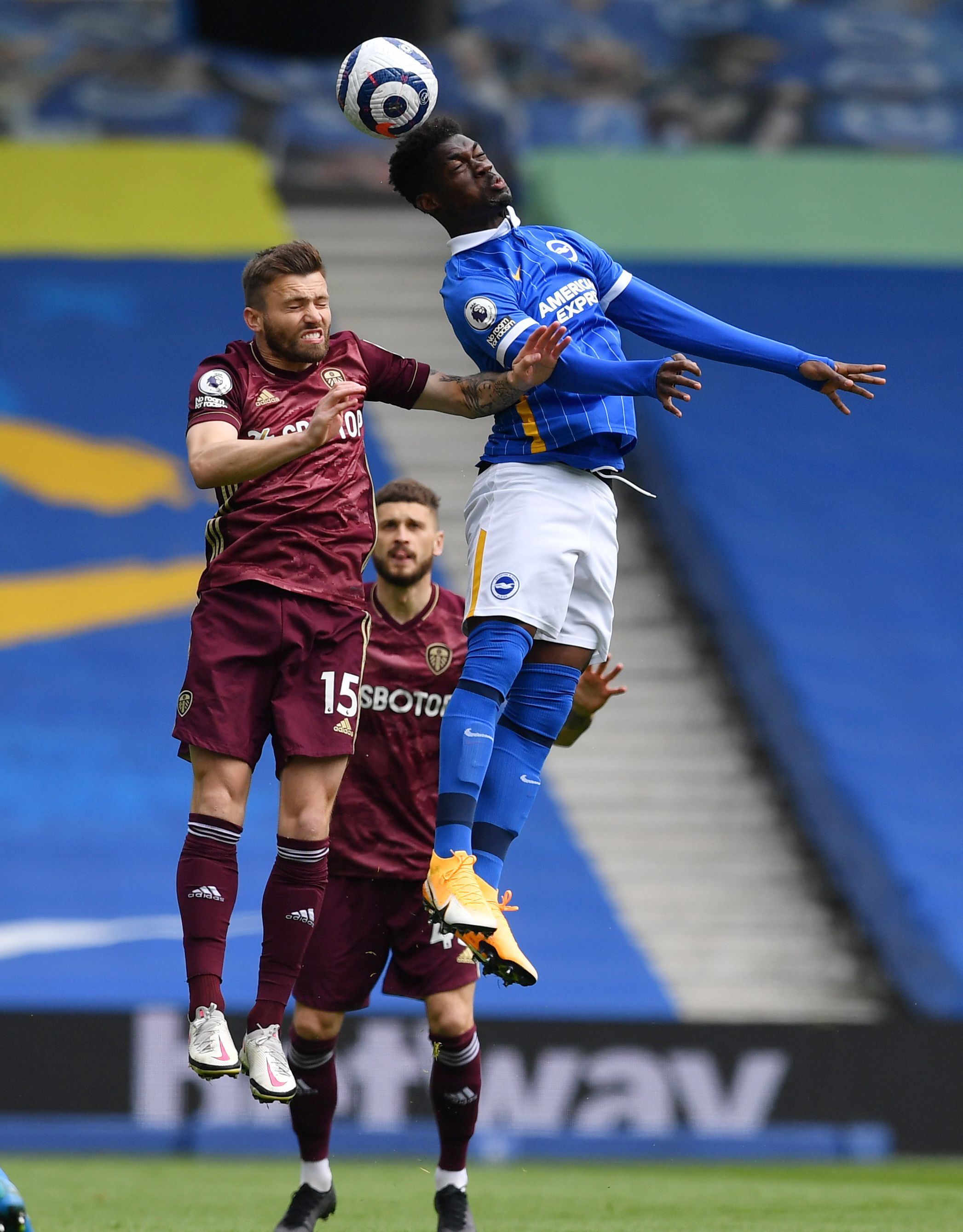 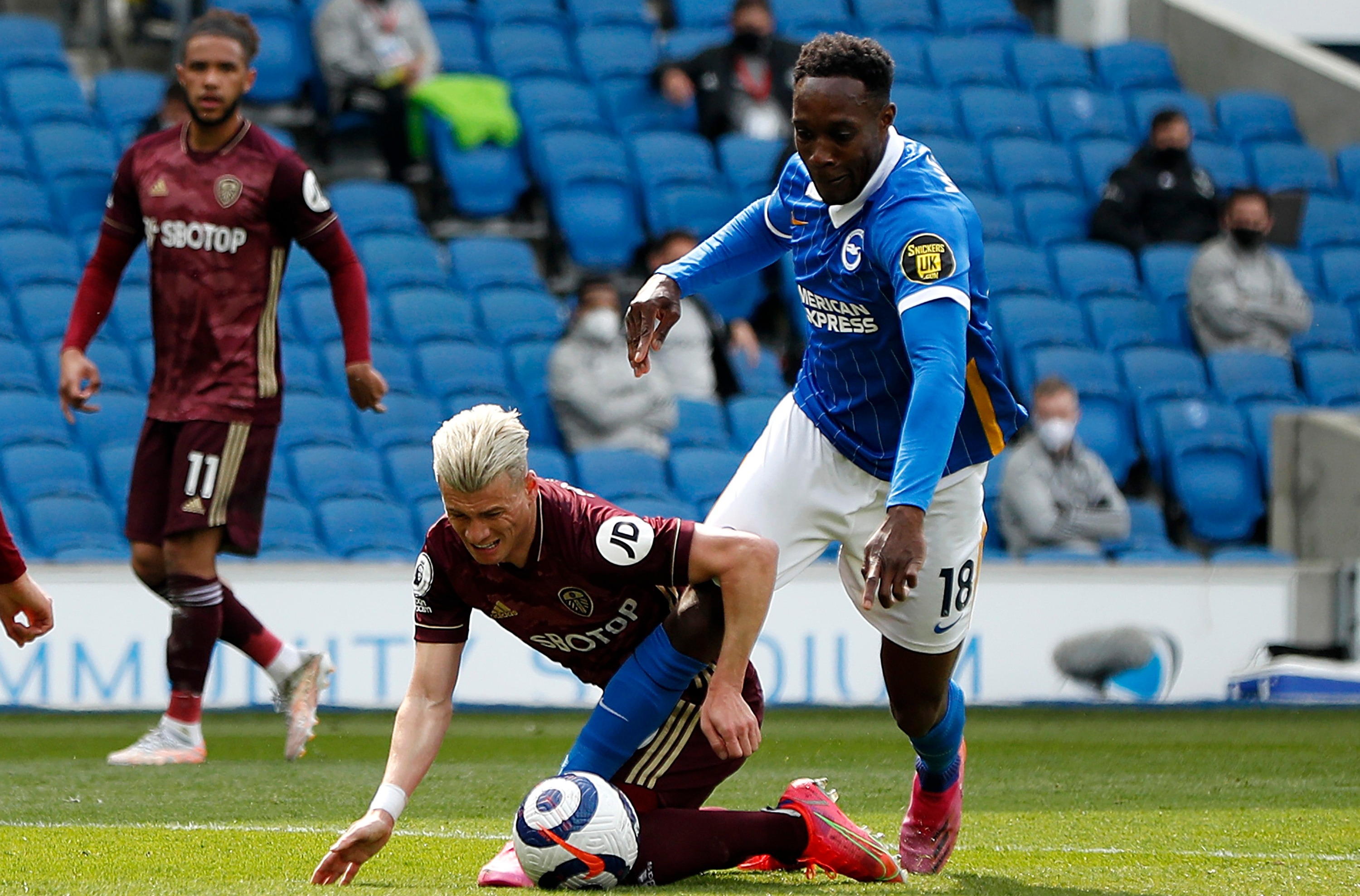 It was a fragile lead and the home side knew it, their desperation for a second evident as they continued to press forward in numbers.

Ad they really should have doubled their lead five minutes before the break when excellent pressing from Welbeck caught Leeds playing around at the back, and the forward rolled a ball across for Trossard with the goal at his mercy.

But when composure was needed he was found wanting and the ball blazed high over the bar instead of nestling in the back of the net.

The second half was only a minute old and Brighton were guilty of another howler .

Burn got down to the byline on the left and pulled the ball back for Veltman arriving 12 yards out – and again the effort ballooned high into the stands.

You’d be forgiven for thinking that would be it in the glaring misses stakes. But not when Brighton are in town.

For the worst was yet to come as Veltman rolled a lovely ball to Neal Maupay, unmarked 12 yards out, and the striker completely missed his kicked and bobbled a tame shot two yards off target.

Leeds had offered little to nothing, particularly after the break, but the fact they were still in the match to make it a nervous last quarter was all down the Seagulls.

It could have been worse had Stuart Dallas not seen his dipping volley from 20-yards just fly over the bar.

Luckily, though, Welbeck stepped up with a flash of quality when it was needed most with a lovely turn and finish to settle the contest on 79 minutes.