Handheld breathalysers could soon spot signs of diabetes and cancer

A breathalyser that detects early warning signs of chronic diseases like diabetes and cancer is being created by scientists after the development of a new sensor.

Researchers successfully created a material called a ‘nanoparticle scaffold’ which is made of tiny pieces of metal and semiconductors — all thousands of times smaller than a human hair — that are integrated into a small and highly-sensitive sensor.

These will be fitted into handheld devices, similar to what the police use to test drunk drivers, to detect signs of disease in a person’s breath, scientists say.

This proof-of-concept study is now being taken to the next stage and a prototype is currently being built. 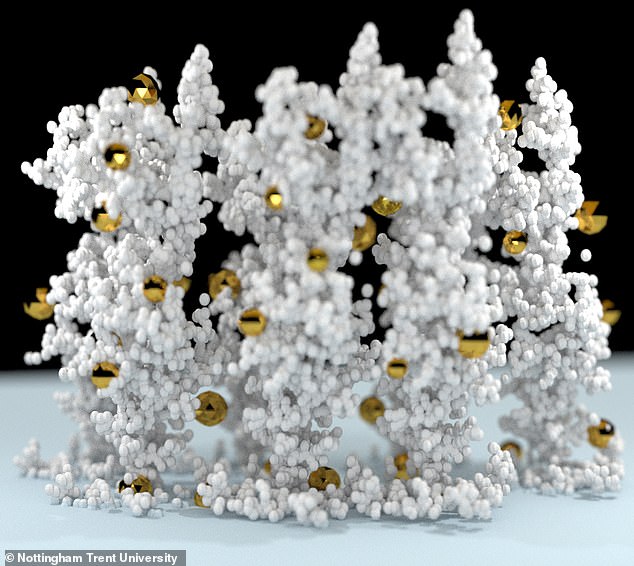 Scientists have successfully created a material called a ‘nanoparticle scaffold’ (pictured) which is made of tiny pieces of metal and semiconductors — all thousands of times smaller than a human hair — integrated into a small and highly-sensitive sensor.

Biomarkers of disease can be used to identify the presence of infection or a burgeoning long-term health condition and are currently spotted via blood tests.

But these hallmarks of illness are also found in a person’s breath, but at much lower concentrations.

Currently, it takes a lab analysis and expensive electrical equipment to detect their presence but researchers at Nottingham Trent University have been working on making a cheap and easy way of spotting them without invasive procedures.

To do this, the researchers focused on creating specialised nanoparticles which increase the sensitivity of optical tests that do not need electricity or highly-trained lab staff to give a result.

The new material is able to spot molecules that are only present in a sample of breath at the level of 100 parts per million, similar to current lab-based methods.

At this level, doctors could get a positive result for signs of of diabetic ketoacidosis, a potentially life threatening condition, for example.

Dr Mohsen Rahmani, a Royal Society Wolfson Fellow at Nottingham Trent and co-author of the paper, said: ‘The good thing about breath is it’s full of biomarkers that could help us to detect chronic illnesses, but their concentration is so little in gaseous environments.

‘The problem up to now has been the lack of a reliable detector. Our new material, however, would be able to detect a low concentration of biomarkers freely moving within these environments.

‘Our sensing material will not need batteries, wires or large and expensive lab equipment.

‘This paves the road for the next generation of pocket-size sensors that could quickly and reliably diagnose disease at very early stages, simply by blowing on them.’

The scientists documented their findings in a research paper in the journal Advanced Materials.

Australian researchers at Royal Melbourne Institute of Technology (RMIT) and Queensland University of Technology are also helping build the prototype.

It is hoped that by improving testing for conditions, people can rapidly see medical advice and treatment before their condition and symptoms worsen.

Pregnancy-style tests for Covid-19 and HIV would be ‘up to 100,000 times more sensitive’ if they used tiny diamond crystals

Pregnancy-style tests for diseases such as Covid-19 and HIV could soon be upgraded with embedded ‘nanodiamonds’ that improve their sensitivity up to 100,000 times.

While PCR swabs are currently the most common way to test for coronavirus infection, other diagnostic methods are also being developed.

These include ‘lateral flow’ tests that work in the same way as pregnancy tests, in that they can detect the virus proteins in bodily fluids, such as blood or urine.

Traditionally, lateral flow tests use gold nanoparticles, which absorb light and produce a red line to indicate a positive result.

However, the researchers claim that replacing gold with diamond nanoparticles would result in this line emitting a bright fluorescent light, which is easier to detect, making the test up to 100,000 times more sensitive.

UCL researchers working on the project say this method, which is still in its early stages, could allow for earlier diagnosis and rapid treatment.