Why do doctors miss women’s heart attacks? Study shows chest pain, sweating and shortness of breath are the most common symptoms for BOTH sexes

However, this divide has now been proved false by a team of scientists, who found ‘considerable overlap’ of symptoms between the sexes.

A study from Dutch researchers found chest pain, sweating and shortness of breath are the main three symptoms of a heart attack for both sexes.

According to the British Heart Foundation, women had a 50 per cent higher chance than men of receiving the wrong initial diagnosis following a heart attack. 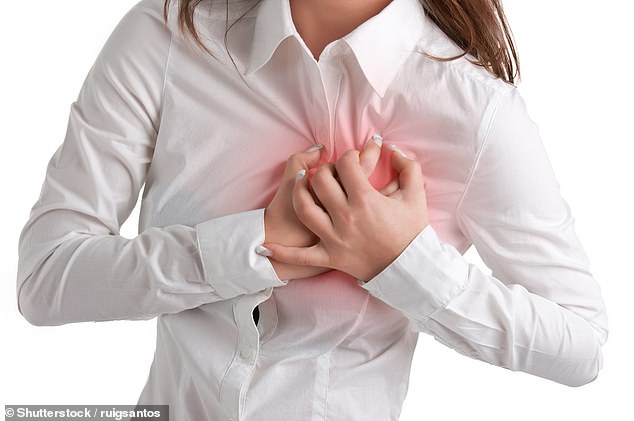 According to the British Heart Foundation, women had a 50 per cent higher chance than men of receiving the wrong initial diagnosis following a heart attack. A study from Dutch researchers found chest pain, sweating and shortness of breath are the main three symptoms of a heart attack for both sexes (stock photo)

A study published in the Journal of the American Heart Association looked at 27 high-quality studies over the last 20 years which have recorded symptoms in patients with confirmed acute coronary syndrome (heart attack or unstable angina).

‘But our study shows that while symptoms can differ between the sexes, there are also many similarities.’

But despite the three most common symptoms being consistent for both sexes, there are some noticeable differences between men and women.

Women, for example, are more than twice as likely to experience pain between the shoulder blades.

Women are also more likely to have nausea or vomiting, and struggle with shortness of breath.

Chest pain and sweating were the most frequent symptoms in both women and men, but are more often seen in men, the study also found.

The study only assessed the prevalence of certain symptoms and not the cause of them.

Dr de Boer said: ‘Previous research has shown sex differences in how heart attacks occur in the body, but it is uncertain how or whether this relates to symptom presentation.

‘The cause of symptom differences between the sexes deserves further study.’

At least two women die ‘needlessly’ of a heart attack every day because men get better medical care, experts warn.

A report by the British Heart Foundation from 2019 reveals stark differences in how the sexes are looked after due to the mistaken belief that heart attacks are a ‘man’s disease’.

The BHF found that women get treated slower, are less likely to receive life-saving scans and tests, and, even when they are discharged from hospital, many are not provided with vital drugs or access to rehabilitation programmes.

The charity’s researchers estimate that 8,243 women in England and Wales have died over a ten-year period – the equivalent of 69 a month, or more than two a day – who would have survived if they had received the same care as men.

‘Yet women are dying needlessly because heart attacks are often seen as a man’s disease, and women don’t receive the same standard of treatment as men.’

The report reveals that when women have a heart attack they often delay seeking help – taking up to seven hours and 12 minutes to arrive at hospital, compared with three hours and 30 minutes for men.