HENRY DEEDES watches as America goes to the polls

What happens if the US election turns into a legal battle? HENRY DEEDES watches as America goes to the polls with sales of guns soaring and police on standby in case of a bitter stalemate

National polls currently put Biden’s lead over Trump at 8 per cent. And those are just the conservative ones

With the President due to address a 2,000-strong crowd that afternoon, gas-guzzling pick-up trucks roared down the main street while Trump supporters gathered in the town’s main bar to slurp beer and eulogise about their hero.

One elderly lady, who had brought her family along for the day, told me: ‘We’re just here to support the guy that is going to make America great again.’

Amid the burger vans and merchandise stalls, a middle-aged woman braving the drizzle explained to me why she was there: ‘This is God’s country, honey, and we’ve gotten away from that. He’s done great things.’

Such jubilant scenes of Trump-worship reminded me of the last time I was in America, back in March, when the President, emboldened by his enemies’ failed attempt to impeach him, was an untouchable capo of the Republic.

Now, three days ahead of one of the most bitterly fought elections in America’s history, the political reality could not be more different.

Most devastating for Trump’s presidency has been the perception of his handling of the pandemic, which has resulted in nearly 230,000 American deaths.

On top of that, the Black Lives Matter protests, inspired by the killing of George Floyd at the hands of Minneapolis Police in May, saw America turn on itself as major cities exploded into violence.

Having spent the past week in the States, the fall-out from these events is plain to see.

Here in Washington DC, where unemployment has almost doubled in the past year to 9 per cent, homelessness is rife.

The area around Constitution Park, a stone’s throw from Capitol Hill, currently resembles a travellers’ site.

On street corners and outside convenience stores, vagrants await, arms out-stretched, asking not for money, but food.

In mighty New York, the world’s greatest city is zapped of its sparkle and humour. Midtown, its financial heart, is deserted.

Almost anyone who can afford it has left the city, and now the Big Apple looks, as one sad former New Yorker told me this week, like an old flame who’s fallen on hard times and become dependent on drugs. 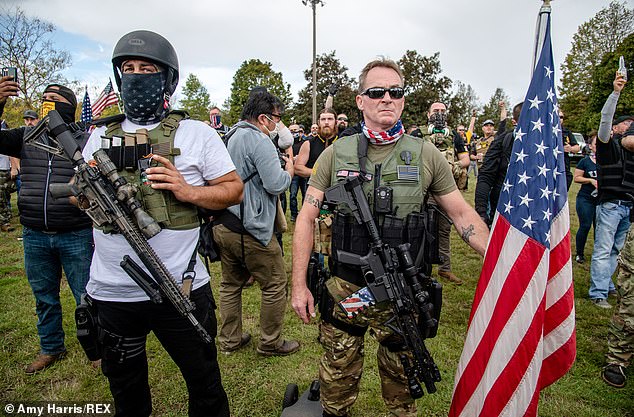 Proud Boys are seen gathering for a rally at Delta Park Vanport on September 26. Across every state, there have been disturbing reports of weapons sales skyrocketing ahead of polling day

Small wonder, then, that the consensus here is not whether Mr Trump will lose to his Democrat opponent Joe Biden, whose hopelessly sclerotic campaign would be a laughing stock in any other election year, but how badly.

National polls currently put Biden’s lead over Trump at 8 per cent. And those are just the conservative ones.

How depressing, then, that when Americans cast their ballot papers on Tuesday, this disunity among them could not only increase, but might actually see the country descend into all-out civil war.

Don’t believe me? Here’s how. On a mundane level, we may have to wait days for a result because of the vast increase in postal votes in this year’s election due to the Covid crisis.

These have to be opened and subjected to various technical requirements, so take far longer to process.

The greater concern for Americans is Trump’s insistence that even a whiff of impropriety will trigger a legal fight to hang onto the keys to the White House.

And should the election end up being closer than expected — far from impossible considering how spectacularly wrong the pollsters got it last time — he will have good reason to think he stands a decent chance of success.

Long, drawn-out legal battles are of course Mr Trump’s bread and butter. This is a man who has forged his entire business career by suing and counter-suing opponents, grinding them down through an expensive war of attrition. But it is more than Trump’s legal battle scars which could hand him the advantage.

Since he was elected in 2016, the President has been busy stuffing America’s judiciary with judges sympathetic to him.

The confirmation of the right-wing Amy Coney Barrett to the Supreme Court on Monday further solidified the Republican majority in America’s highest court. 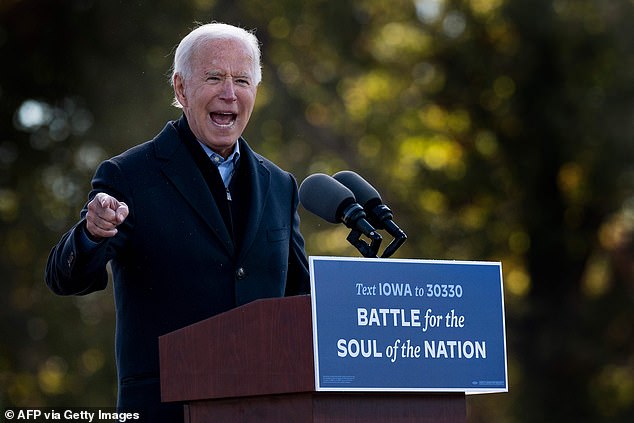 Small wonder, then, that the consensus here is not whether Mr Trump will lose to his Democrat opponent Joe Biden, whose hopelessly sclerotic campaign would be a laughing stock in any other election year, but how badly

Should any election dispute end up before the Supreme Court, as it famously did over Florida’s count when Al Gore lost to George W. Bush in 2000 by just 537 votes, there is every possibility the court will come down on Trump’s side.

The constitutional crisis which would ensue will make the Gore/Bush saga look like a lovers’ tiff.

America’s law enforcement agencies are already gearing up for days, if not weeks, of civil unrest in anticipation of such a scenario.

Even as I write, workers around my hotel in Downtown DC, just a few blocks from the White House, are busy boarding up buildings to protect them from rioters. Gun-toting Police and Secret Service agents, armed to the nines with the latest in sophisticated hardware, almost outnumber civilians.

In Texas, the National Guard is said to be deploying troops all around the Lone Star state this weekend because of concern about violent disturbances.

Citizens too are busy readying themselves. Across every state, there have been disturbing reports of weapons sales skyrocketing ahead of polling day.

The National Shooting Sport Association, the trade association for America’s firearms industry, recently reported gun sales were up 95 per cent compared to this time last year. Sales in ammunition ballooned by a whopping 139 per cent.

Only a month ago, Trump supporters faced off against armed militias in normally genteel Louisville, Kentucky.

If the idea of anarchy breaking out in the so-called ‘land of the free’ sounds like the stuff from a dystopian J. G. Ballard novel, then it really shouldn’t.

It is hard to over-emphasise just how torn America feels right now. Zig-zagging across the country this past week, I have encountered hate and division at every turn. And while Trump’s core voters are unflinching in their support, much of the hatred is directed at the President.

During a trip to upstate Pennsylvania on Monday, I spoke to a Biden campaigner called Joan Duckenfeld who compared Trump to a fascist.

She told me: ‘My father fought in the Battle of Normandy and my mother made bullets at Frankford Arsenal [a World War II munitions factory in Pennsylvania]. They were anti-Fascists and I can be no less.’

At a Black Lives Matter vigil in front of the White House south lawn recently, I came across a woman from New York called Karen Irwin. She told me the previous evening, Trump-supporting thugs had arrived en masse and ripped down all the tributes pasted onto the wire gates.

Trump’s failure to quell racial divisions was evident in Philadelphia this week. Early on Wednesday, I arrived in a city overrun with violence after police shot dead a mentally ill black man called Walter Wallace Jr. the previous evening.

Hearing the angry crowd out on the streets while enjoying an evening beer in an Irish-themed pub later on that day was a disconcerting experience.

Even the kindly reassurance from a grizzled barfly, who advised me the mob ‘only wanna kill cops’, did little to settle my unease. So how will it all play out on Tuesday?

Even if Trump does choose to go quietly (and given his vote- rigging jibes that is by no means guaranteed) he still has the potential to wreak havoc in his final two months in office.

There will be the predictable slew of Presidential pardons bestowed upon those Trump will consider useful to his post-politics career. To be fair, he won’t be the first or last President to exercise this unseemly parting shot.

But far worse scenarios could play out.

Trump could sign a raft of irresponsible executive orders — regulations which don’t require the approval of congress — which a Biden administration would then have to spend months, or even years, unpicking.

Only last week, Trump issued one such order, effectively giving the President the power to fire thousands of independent-minded civil servants and replace them with politically appointed stooges happy do the leader’s bidding.

First to be fired, should Trump somehow win again, would be White House medical advisor Dr Anthony Fauci, whose dire warnings about coronavirus were at odds with Trump’s denials.

Given his unpredictability, the idea that Trump might just slope off to his garish Mar-a-Lago Florida retreat to sulk and whack golf balls all day might be the least worst option for everyone. 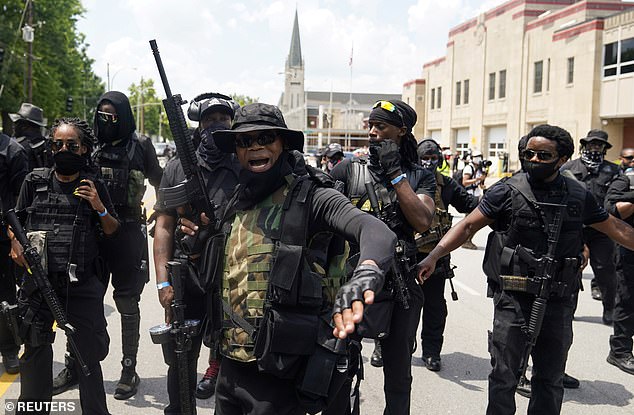 Protesters are pictured above in Louisville, Kentucky in July.  If the idea of anarchy breaking out in the so-called ‘land of the free’ sounds like the stuff from a dystopian J. G. Ballard novel, then it really shouldn’t

Of course, we probably shouldn’t totally discount a Trump victory and not just because of what happened last time. He has been extraordinarily energetic out on the campaign trail, making as many as four stops a day to rally his support base.

And for all its problems, the U.S. economy, so often the biggest influencer come election time, grew an impressive 7.4 per cent at the end of September.

But to me The Donald looks beaten. He eyes are shot, his body language defensive. His tone, too, has become increasingly whiny.

Meanwhile, his government departments have seen an ever-revolving door of departing staff over the past couple of years, many of whom had simply had enough. The absence, too, of his icy wife Melania by his side, until she finally showed up in Florida on Thursday, suggests she’s long done with Washington, too.

If Trump is booted out, what next? There are reports the President may set up his own television channel, Trump TV, whose output we can assume will make the claim of his right wing friends on Fox News’ to be ‘fair and balanced’ sound reasonable.

Not all options are as inviting, or lucrative. Two months ago, Manhattan district attorney Cyrus Vance Jr. announced in a court filing that his office had the grounds to investigate the President and his businesses for tax fraud over his various business dealings.

Prosecution, worse still jail, would represent an even greater humiliation than losing to a chump like Joe Biden.

And so as polling day approaches, Americans have a stark choice. A Joe Biden presidency is hardly a prospect to savour. Watching him up close this week, the 77 year-old shows every sign of being the sort of old duffer who, when sent to the market for a tray of oranges, returns with a handful of bananas.

So hapless does he sometimes appear, few Washington politicos expect him even to serve a full term. This would mean handing over to his running mate and former California Attorney General, Kamala Harris, whose flinty personality may not be the unifying force America needs right now.

Yet the alternative is a President who shows an ever increasing detachment from reality. Even as Covid infections rates continue to rise across every U.S. state, Trump, fuelled by his nuclear-powered ego, insists on telling everyone he has defeated the virus.

What a sorry state of affairs American politics has become. How one longs for the likes of Ronald Reagan, arguably the greatest of modern Presidents, who when he departed the White House in 1989, described the United States as ‘the great shining city on hill.’

Whatever happens on Tuesday, it is hard to imagine that shine returning any time soon.