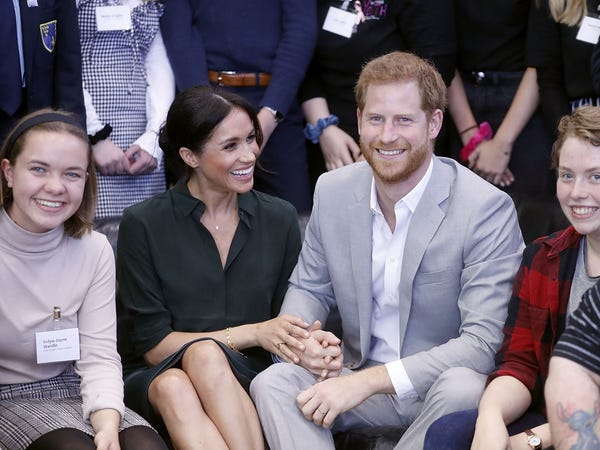 Prince Harry asked to be introduced as "Harry" instead of "Prince Harry" or "the Duke of Sussex" at a sustainable-tourism summit earlier this year, and ever since people haven't been sure what to call him.

He stopped using his HRH title after he officially resigned from the royal family in April.

It's unclear whether he will start using a last name — here's what it could be if he decided to use one.

'Harry' isn't actually his real name — but 'Duke of Sussex' is

"Harry" is actually a nickname for "Henry," though the prince has never used the name.

His full name is His Royal Highness Henry Charles Albert David Duke of Sussex, as was written on baby Archie's birth certificate.

While Harry stopped using the HRH title in his name in April, he has remained the Duke of Sussex.

This style is similar to that used by other royals who dropped their titles. For instance, when Princess Diana and Prince Charles divorced in 1996, she did not revert to the name Lady Diana Spencer but became Diana, Princess of Wales.

However, Harry appeared not to want to be introduced using his title at the summit earlier this year.

More recently, Kate Middleton and Prince William scrapped the "Duke of Sussex" title from their birthday message to him on Tuesday.

This could be a sign that Harry plans to stop using the title. Alternatively, he could remove "duke" and be known as Harry Sussex.

This wouldn't be unusual for the prince: He was known as Harry Wales — after his father, the Prince of Wales — during his school days and throughout his time in the British army.

He could also use the royal family's official last name, Mountbatten-Windsor

While "Wales" was used in instances where the royal needed a last name growing up, he technically never had one.

The royal family's official last name is Mountbatten-Windsor, but Harry and Meghan Markle never had to use it before because they had HRH titles.

It's a combination of Prince Philip and Queen Elizabeth II's last names: "Mountbatten" from Philip's side, and "Windsor" from the official name of King George V's descendants.

"It was therefore declared in the Privy Council that The Queen's descendants, other than those with the style of Royal Highness and the title of Prince/Princess, or female descendants who marry, would carry the name of Mountbatten-Windsor," a statement on the royal website says.

Harry gave the last name to his son, Archie Harrison, who does not carry a title but instead is referred to as "Master Archie."

However, the couple are yet to confirm whether they will change their name in the future.

In the meantime, it seems most appropriate to call him Harry, Duke of Sussex — or, as he requested, simply Harry.