Home » Lifestyle » ‘How could he have been so stupid’: Turnbull, Joyce and the ‘bonk ban’ debacle

‘How could he have been so stupid’: Turnbull, Joyce and the ‘bonk ban’ debacle

Former deputy prime minister Barnaby Joyce gave an “unequivocal” assurance he was not in a sexual relationship with staff member Vikki Campion in May 2017, despite later writing about how close they were at that time.

Months before the affair became public, Mr Joyce gave the assurance to then prime minister Malcolm Turnbull after being with Ms Campion at a doctor’s surgery in Canberra. 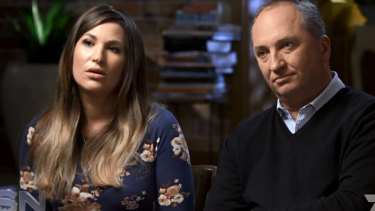 Vikki Campion and Barnaby Joyce during their paid interview on the Seven Network in 2018.Credit:Sunday Night

Mr Joyce’s former wife, Natalie, told The Australian Women’s Weekly she confronted Ms Campion in Tamworth in March 2017 to tell her Mr Joyce was “off limits”.

But Mr Joyce’s denial in May 2017 meant Mr Turnbull took no action on the matter and assumed the Nationals leader knew the story was “dynamite” if he did not manage the situation.

Mr Turnbull describes Mr Joyce as a “complex, intense, furious personality” who gives the impression he is “about to explode” when in full flight.

“He’s highly intelligent, often good-humoured but also has a dark and almost menacing side – not unlike Abbott – that seems to indicate he wrestles with inner troubles and torments,” he writes.

Only in February 2018 did the affair come to light, in a series of reports by Markson that rocked the government when it was trying to recover ground in the opinion polls.

Frustrated with Mr Joyce’s handling of his personal and political life, Mr Turnbull then applied a “bonk ban” on ministers to prevent relationships with their advisers, a decision he defends in his memoir.

Mr Turnbull says only two members of the government’s leadership group, Christopher Pyne and Scott Morrison, supported the bonk ban when he proposed it on February 12, 2018, and announced it three days later.

“I couldn’t help being angry with him,” Mr Turnbull writes of Mr Joyce.

“How could he have been so stupid, so recklessly selfish, as to do so much damage to our government?

“I couldn’t sack him as he was the leader of the National Party and yet as every day wore on and we all lined up to defend him, we appeared to be condoning his conduct.”

Mr Joyce resigned on February 26 and the bonk ban remains part of the ministerial code of conduct applied by Mr Morrison as Prime Minister.