Andy Orme, 34, shares with Men’s Health the changes he made to his diet and lifestyle that led to him burning fat and building muscle.

From my early teens into my twenties, I was super active and participated in numerous sports at least three or four times a week, and so did not really pay close attention to my diet as I was able to maintain a relatively healthy weight. I then “fell out of love” with participating in all sports and became a spectator instead, which regularly involved consuming too much alcohol.

This physical inactivity, combined with a complete disregard for my diet, led to me gaining weight. Every day I would have a delivery driver at my door, sometimes on multiple occasions. Food became a comfort to me and unfortunately, I did not know when to say no. The ease with which you can order food online and have it delivered in less than 30 minutes was all too convenient, and meant I could eat alone without judgment from others.

I had not comprehended just how bad my anxiety had become, until it came to the point where I would not want to leave my apartment to meet with friends, and I dreaded even going out in public to the shop – I didn’t want anyone to see me. At my heaviest, I was just over 224 pounds.

For the past few years, I had been wearing compression vests underneath my clothes because I was conscious of what other people would make of my appearance. I would wear clothes that would hide this, however one day on the rare occasion I would meet with friends, they questioned what I was wearing. I thought I had hidden this ‘secret’ of mine but it was evident I had not, which then sent my anxiety through the roof. I left and went home and continued with ordering junk food to comfort my emotions. Opening up to my friends about my struggles with anxiety, which is the first time I had ever discussed it with anyone, made me realize that I needed to take action for both my physical and mental health.

One of the biggest immediate changes I made was reducing my alcohol intake – almost to the point of none. Throughout the whole process, I would say I only had about six or seven gin and tonics.

I started working out at Ultimate Performance Dubai, and for the first 12 weeks of the program I was in the gym with my trainer Tawfik Bakkar three days a week. For the remaining 11 weeks, this increased to four days a week. The sessions were all weight-based exercises, and outside of the gym, my goal was to get 20,000 steps in per day. This sounds like a lot, and at first, I was hesitant, but after a few weeks, my trainer was almost having to put a leash on me as I was far exceeding this.

The beauty of living here in Dubai is that there are a number of well established companies who provide you with nutritional, macro tracked meal plans. I would only consume these meals, together with a protein shake post workout. I stuck to the meal plan seven days a week as I knew that diet equates roughly to 70% of a weight/fat loss transition.

The support and motivation I received from Tawfik was a huge contributing factor in my transformation. He was always on hand to answer any questions I had, and would check in on me daily to see how I was. This is different from other trainers I have had in the past, whereby they forget about you as soon as you’re out the door.

Whilst I had some idea prior to training with Tawfik, I never really paid attention to the finer details; for example, the reason behind why you perform a certain exercise and how to properly target a specific muscle group. I think it is safe to assume that when someone starts weight training, their ego takes over and try lifting too heavier weight and not focussing on the range of movement. I used to be one of those people! I have learnt the safe techniques to train efficiently and how you can still enjoy a meal or two out by just choosing the right menu option.

Originally, I had only signed up for 12 weeks of training, however having seen the transformation to that point, it then got me thinking about where I could take this. Never before have I seen my abs, and I always thought that would be the case as I was just destined to be a little bit fat. So I then set my sights on achieving this and that became a motivating factor as I had come so far already. 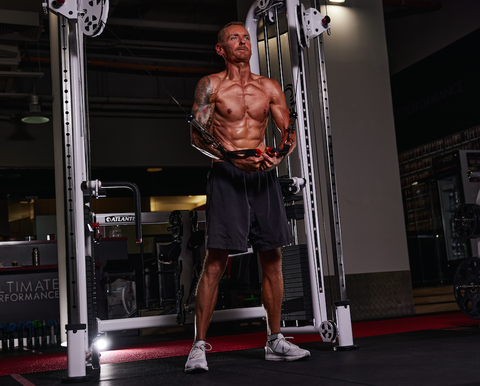 Over the course of six months, I lost 27 kgs (60 pounds) and went from 30 percent body fat to 9 percent. As a result of this, my energy and self-confidence are at an all-time high, and I now struggle to sit still for long periods of time – I just want to keep moving. I no longer go out in public and worry about what other people think about me ,as I feel comfortable in myself now not to let that bother me. It had also been a good few years since I had taken my top off around a pool or on the beach, and now I can’t take it off quickly enough.

I am definitely not finished yet. The next goal I am setting myself is to build muscle size and put on some weight, but in a controlled manner following a calorie tracked diet.

If I could give one piece of advice to somebody who is at the beginning of their own fitness journey, I would say, don’t just focus on the end goal, as it will take time but will be absolutely worth it. Just try and do better each day than the day before, but also, don’t get disheartened if you “fall off the wagon.” Get back on the wagon, and leave all excuses at the door!