For the sixth time this Atlantic hurricane season, people in Louisiana are fleeing the state’s barrier islands and emergency officials are considering evacuation orders as Hurricane Delta churns through the Gulf of Mexico. It’s the unprecedented season’s 25th named storm.

Forecasts placed most of Louisiana within Delta’s path. The National Hurricane Center projects a landfall Friday afternoon or night.

Early Thursday, Delta was some 450 miles south-southeast of Cameron, Louisiana and moving northwest at 15 mph, with sustained 100 mph winds.

The center’s forecasters warned of gusts well above 100 mph and a “life-threatening” storm surge of up to 11 feet when Delta’s center hits land. It could bring up to 15 inches of rain in some spots and five to ten inches in many areas, the center added.

“This season has been relentless,” Louisiana Gov. John Bel Edwards said, dusting off his now common refrain of 2020: “Prepare for the worst. Pray for the best.” 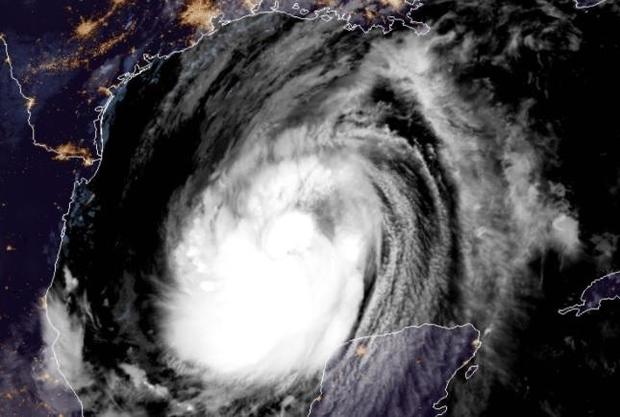 But Edwards said Delta is moving fast, so hurricane force winds could reach well inland and expected heavy rains could cause flooding.

Delta strengthened back into a Category 2 hurricane early Thursday after a hurricane warning was issued for a stretch of the northern U.S. Gulf Coast. Delta is expected to become a major hurricane again by Thursday night, forecasters said, then some weakening is forecast when it approaches the coast.

Delta was a major hurricane when it hit Mexico’s Yucatan Peninsula Wednesday.

It trapped many American tourists, reports CBS news correspondent Mireya Villarreal, and many worried about being in crowded shelters during a pandemic.

“They took us into an abandoned building, no heat, no air conditioning, no fans, no kind of ventilation at all,” Agence France-Presse quotes 42-year-old Nick Fifis as saying. “The staff are trying to help everybody, but there’s a mess. No masks, no social distancing. It’s just not safe.”

So far, Louisiana has seen both major strikes and near misses. The southwest area of the state around Lake Charles, which forecasts show is on Delta’s current trajectory, is still recovering from an Aug. 27 landfall by Category 4 Hurricane Laura.

Nearly six weeks later, some 5,600 people remain in New Orleans hotels because their homes are too damaged to occupy. Trees, roofs and other debris left in Laura’s wake still sit by roadsides in the Lake Charles area waiting for pickup even as forecasters warned that Delta could be a larger than average storm.

New Orleans spent a few days last month bracing for Hurricane Sally  before it skirted to the east, making landfall in Alabama on Sept. 16.

Plywood, batteries and rope already were flying off the shelves at the Tiger Island hardware store in Morgan City, Louisiana, which would be close to the center of the storm’s path.

“The other ones didn’t bother me, but this one seems like we’re the target,” customer Terry Guarisco said as a store employee helped him load his truck with plywood needed to board up his home.

In Sulphur, across the Calcasieu River from Lake Charles, Ben Reynolds was deciding whether to leave or stay. He had to use a generator for power for a week after Hurricane Laura.

And there are nearly eight weeks of hurricane season left, although forecasters at the National Weather Service office in New Orleans noted in a discussion Tuesday of this week’s forecast that outside of Delta, the skies above the Gulf of Mexico look calm.

“Not seeing any signs of any additional tropical weather in the extended which is OK with us because we are SO DONE with Hurricane Season 2020,” they wrote.