Home » Lifestyle » Indiana's gamble pays off in OT upset over No. 8 Penn State

Indiana's gamble pays off in OT upset over No. 8 Penn State 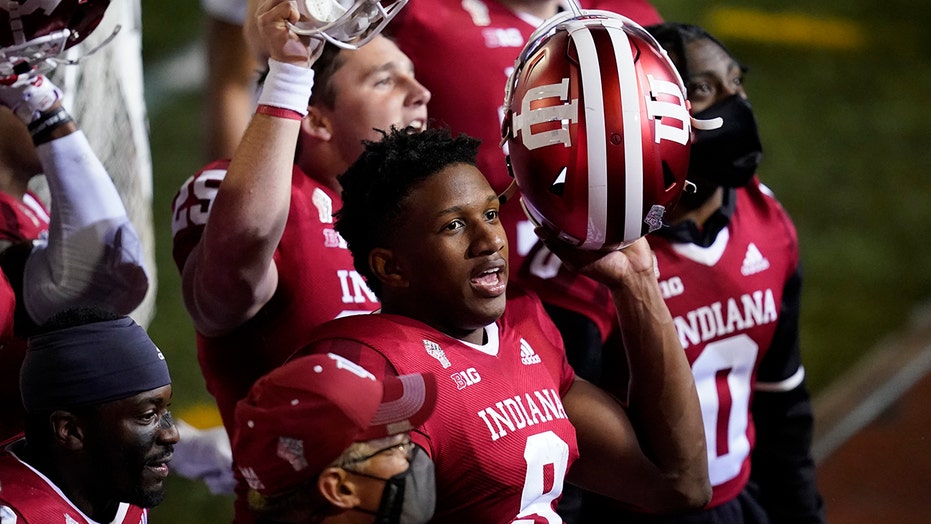 On Saturday, Allen went for it — and Michael Penix Jr. made those gambles pay off the Big Ten rivals' first game of the delayed season,

After leading the Hoosiers on a touchdown drive in the final minute of regulation and scoring on a 2-point conversion to force overtime, Penix hooked up with Whop Philyor for 9-yard TD pass in overtime and dove into the pylon for the decisive 2-point conversion to give Indiana a 36-35 victory over No. 8 Penn State — its first win over a Top 10 team in more than 33 years.

“We’d been close so many times, and I was tired of being close," Allen said. “We liked the call and stayed with the call (after Penn State called timeout) and stayed with the call. We felt like we had our three players inolved in the play and one of those was going to get the ball or Michael was going to keep it. If felt like the right thing to do."

Indiana snapped the longest streak of consecutive losses to Top 10 foes at 42, a skid that dated to a 31-10 victory at Ohio State on Oct. 10, 1987 — a game the late Earle Bruce dubbed as the darkest day in Buckeyes history.

They ended the second-longest active streak of losses to Top 10 opponents in the Football Bowl Subdivision. Only Wake Forest, at 63, had been longer.

They beat their highest-rated opponent since upsetting No. 6 Michigan State in 1967, which capped a three-game streak in which they also beat No. 10 Arizona and No. 7 Wisconsin and won for only the second time in 24 tries against the Nittany Lions.

They did it on a day Penix wasn't at his best. He finished 19 of 36 with 170 yards, one touchdown and three sacks. But his magical feet worked wonders when the Hoosiers needed him most.

“All I'd seen was an opportunity, an opportunity to go out and show the world what the Indiana Hoosiers are all all about," Penix said, referring to the final play of the game. “They were playing man (coverage), and we've got to score to win the game so I wasn't going to let my team down. I went out and gave it my all."

It took a lengthy replay review to confirm the initial call and when the official made the announcement Penix knew was coming, the wild celebration began inside the mostly empty stadium.

Allen needed to pull out every trick in the book, too, especially after Sean Clifford hooked up with Jahan Dotson on a 60-yard TD pass to give Penn State its first lead of the second half, 21-20 with 2:30 left in regulation.

Penn State sacked Penix on the next two plays, forced him to throw the ball away on third and an incompletion on fourth, taking the ball back on down at the Indiana 14. This time, Allen called for the defense to give up the touchdown, hoping for one more possession, and Devyn Ford obliged with a TD run that gave Penn State a 28-20 lead.

Instead, Penix capitalized on the miscue. He took the Hoosiers 75 yards in seven plays, scoring on a 1-yard TD run before the tying conversion. And after Clifford made it 35-28 with 9-yard TD pass to Parker Washington in overtime, Penix hooked up with Philyor before beating two Nittany Lions defenders to the front pylon.

“What was going through my head, was that we're playing the No. 8 team in the country and I knew if we scored would have had the ball on the 3 with a chance to win it," Allen said. “When you think about all the things that happened and all the plays that had to be made to win this game, it’s just amazing."

Indiana: This victory is a huge step for the program. Allen know the Hoosiers need to start beating ranked teams more consistently, and this one came on a day the defense played reasonably well and the offense managed only 221 yards 19:35 of possession time.

Penn State will slip in the Top 25, perhaps precipitously. The defense played well but broke down late while the offense and special teams weren't anywhere near championship caliber.

“It’s turnovers and penalties," Franklin said. “I would hope you guys would agree over last six years, that’s very uncharacteristic for us."

Less than two minutes into the fourth quarter, Penn State thought it had another turnover when receiver Miles Marshall fumbled at the end of a 17-yard completion. Instead as Marshall lay motionless on the field, linebacker Jesse Luketa was ejected for targeting.

The wobbly Marshall eventually got up and was helped to the locker room.

Indiana: At Rutgers next Saturday.