Inside Prince Charles and Camilla’s Library at Clarence House: Duchess of Cornwall is surrounded by 18th century paintings and candelabra and ornate Chinese snuff bottles in new photo

The Duchess of Cornwall offered royal fans a look inside the Library at Clarence House in a photo released to mark her latest radio appearance.

Camilla, 72, was photographed in her official London home during the recording of her special BBC 5 Live show, which was broadcast yesterday.

The Library is used by Prince Charles, 72, and the Duchess of Cornwall for official engagements and is one of five rooms on the ground floor of the house that are open to the public. The Queen Mother, who lived at Clarence House for almost five decades, used the room for intimate dinners.

A closer look at the image – combined with more detailed views offered by Google Arts & Culture’s virtual tour – reveals how the room is filled with royal treasures, from a portrait of Queen Anne (1665-1714) to ornate candelabra. 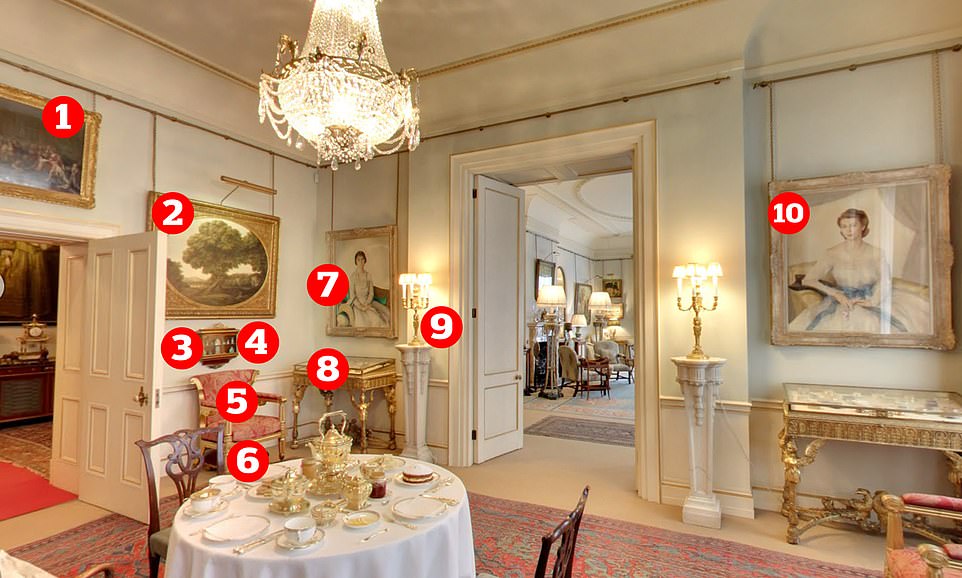 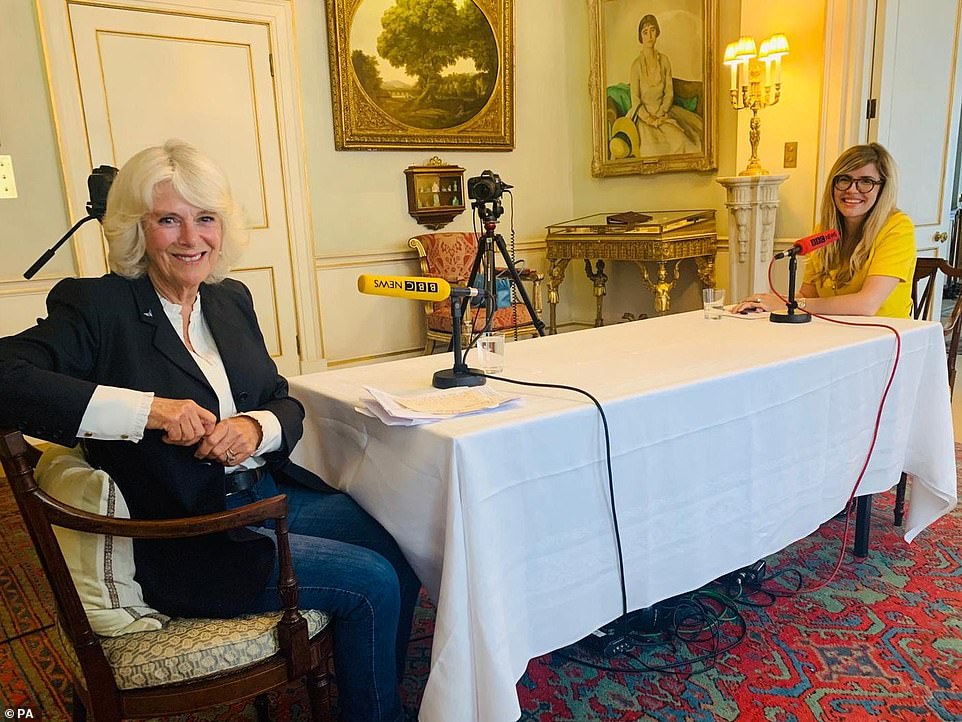 Queen of the airwaves: The Duchess of Cornwall, 72, was photographed in the Library of Clarence House, her official London home during the recording of her special BBC 5 Live show, which was broadcast yesterday

Among the highlights is a Chinese snuff bottle, which was given to the royal family as a Christmas present in 1914, and is showcased in a charming wall-mounted display cabinet, seen in the background of the portrait.

Elsewhere there are twin portraits of the Queen Mother, commissioned while she was still the Duchess of York, and the then Princess Elizabeth, which hang on either side of the grand double doors to the Morning Room.

Here, using archive information made available by the Royal Collection Trust, FEMAIL explores the stories behind just 10 of the objects in the Library at Clarence House… 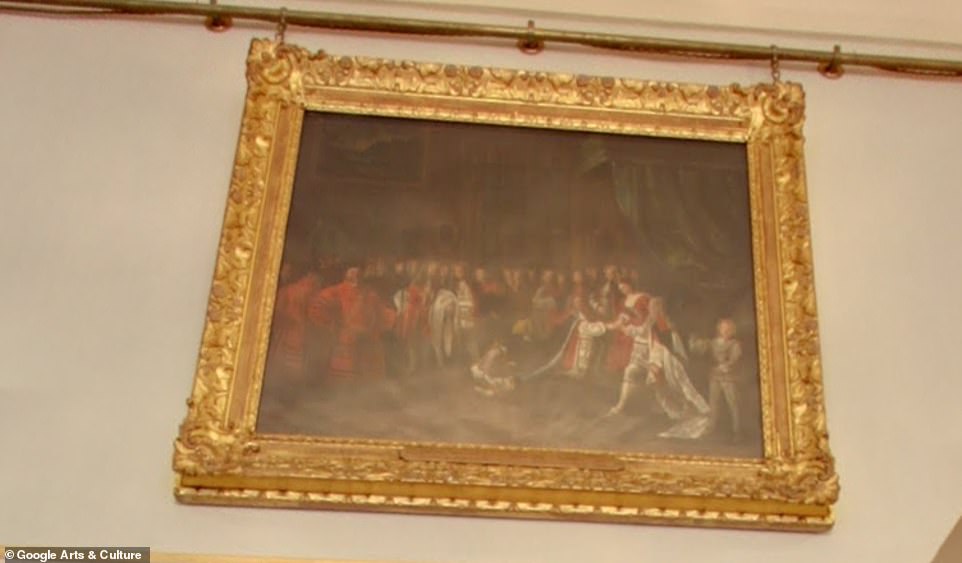 Royal history: Painting is thought to depict the Chapter of the Order of the Garter held by Queen Anne at Kensington Palace, on 4 August 1713, a year before her death. The ceremony was held in London, rather than Windsor, due to her ailing health

This painting is thought to depict the Chapter of the Order of the Garter held by Queen Anne at Kensington Palace, on 4 August 1713 and is a 1899 copy of an original painting that is dated to the 1720s.

The ceremony was unusually held at Kensington Palace rather than Windsor Castle, where it is held to this day, due to the ill health of Queen Anne at the time.

The Queen is seen seated to the right of the painting beneath a green canopy and is depicted leaning forward to touch the hand of a kneeling Kight of the Garter, who is being presented to her by another Knight.

The painting, which hangs above the door from the library to the corridor, is attributed to an ‘MC Hennel’. This is thought to be the artist Mary C Hennell, who exhibited at the Royal Academy in 1917. 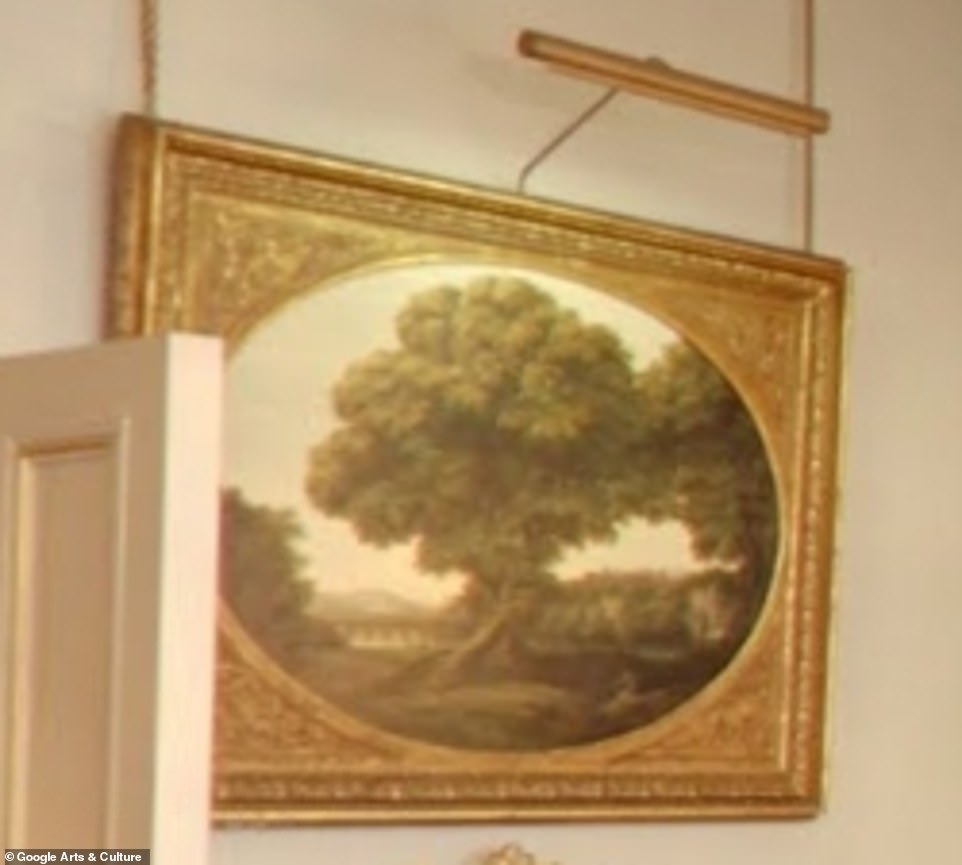 Classic landscape: This painting of a large tree by artist John Taylor, dated 1780, was presented to King George IV in 1822

This painting of a country landscape is one of 18 pictures by artist John Taylor that were presented to King George IV by the artist’s son, Dr J Taylor, in 1822.

Another of Taylor’s painting hangs on the other side of the door in the library. There is a third housed by the Royal Collection.

As the name suggests, the focus of the piece is a large tree in the middle of a woodland area. A viaduct can be seen in the background. 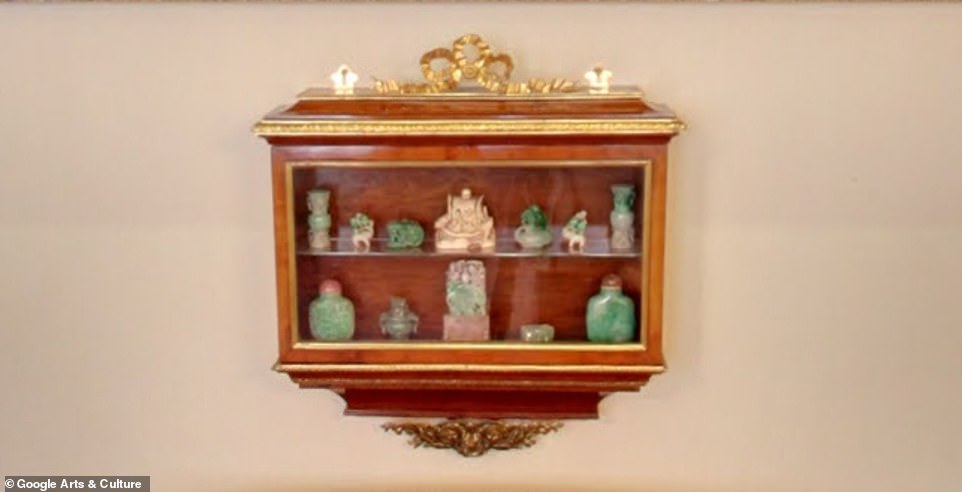 Either side of the door to the corridor is a pair of rectangular hanging display cabinets, which house a collection of objects including the ornate Chinese snuff bottles (more information below).

Unlike many items in the Royal Collection, the designer of these pretty little cabinets is not known.

The cabinets feature beautiful gilt bronze detailing. Above the glass doors are stylised leaves set in a ‘u’ shape.

Among the objects on display in the glass cabinets is a Chinese snuff bottle, which was given to the royal family as a Christmas present in 1914 by aristocratic humanitarian Lady Paget (1881-1958).

The royal family is known to favour smaller, thoughtful gifts at Christmas, or ones that hint at a private joke. This tiny snuff bottle, which is just 7cm tall, certainly fits the bill.

The piece is beautifully carved with flowering peony bush and butterflies and a fish in water with clouds coming out of its mouth. The piece is topped with a coral stopper. 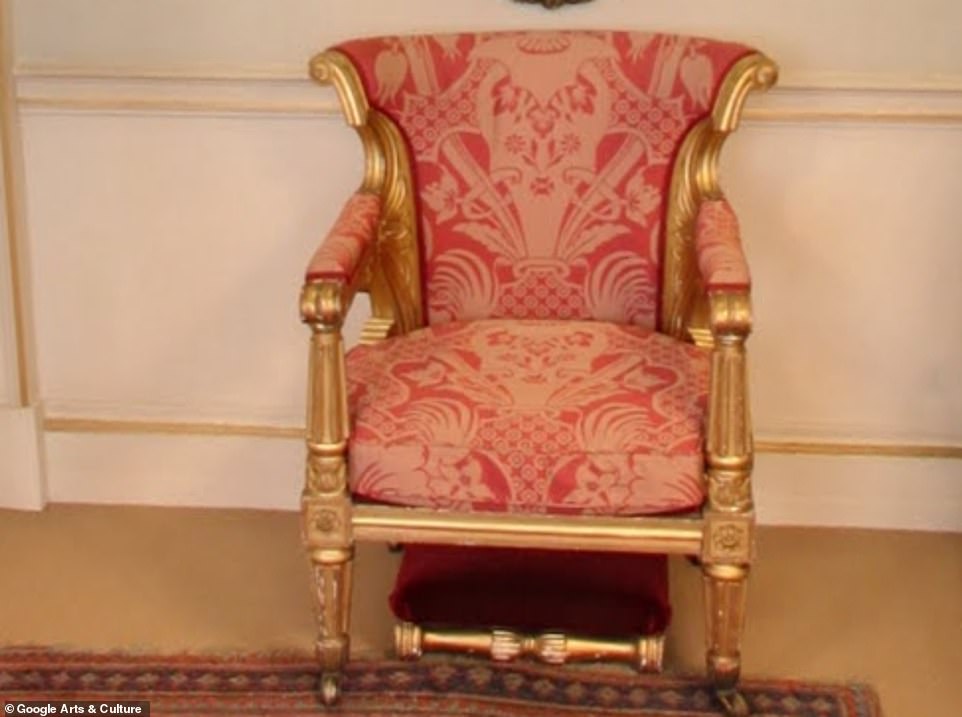 Silk seating: This is one of a set of seven matching red silk armchairs bought from Tatham, Bailey and Saunders. Beneath it is a stool, which features carved and gilded wood and lion’s paw feet, which was given to King George IV circa 1827

This is one of a set of seven matching red silk armchairs bought from Tatham, Bailey and Saunders.

Originally founded in the 1780s, the company was responsible for supplying furniture to the Royal Pavilion and the Prince Regent’s household generally.

This chair, and the matching one on the other side of the door to the corridor, add a touch of colour to the room.

This pretty damask covered stool was given to King George IV between 1827 and 1829 for his then newly built apartments at Windsor Castle.

Designer Nicholas Morel had previously worked for George IV when he was still the Prince of Wales on furnishings for Carlton House and the Royal Pavilion at Brighton and had impressed enough to earn yet another royal commission. In order to fulfil the contract he entered into partnership with George Seddon III whose family had large and long established furniture workshops in Aldersgate Street in the City of London.

The stool, which features carved and gilded wood and lion’s paw feet, is positioned beneath an armchair in the library. There is a second stool beneath the matching armchair on the other side of the door out to the corridor. 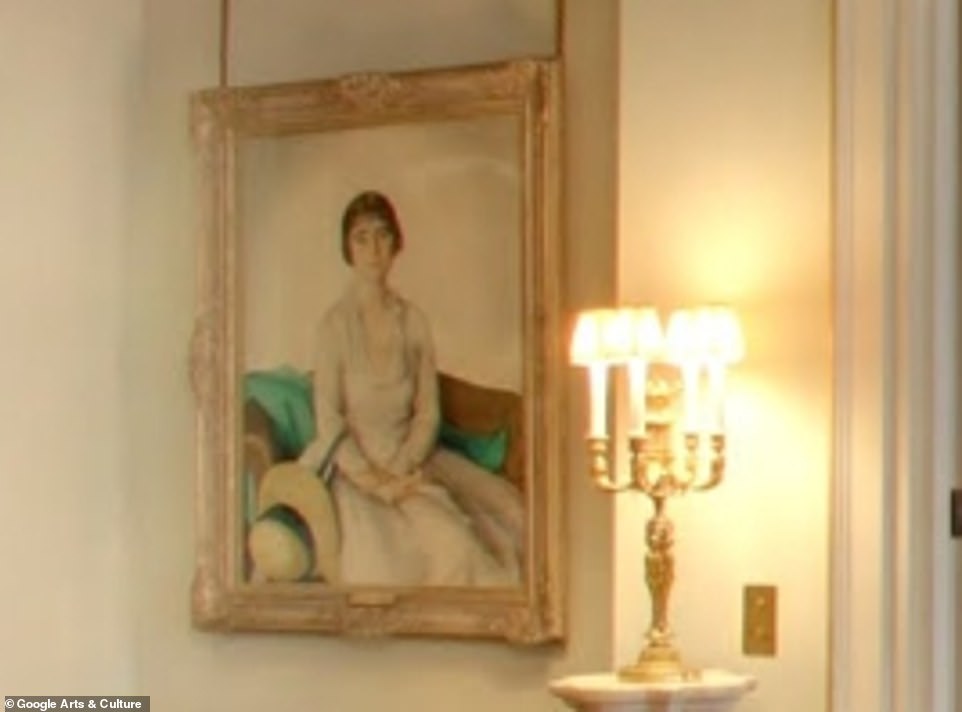 On the wall behind the Duchess of Cornwall is a painting of her husband’s beloved grandmother, the Queen Mother.

The portrait was completed in 1923, the year she became the Duchess of York on her marriage to her husband the Duke of York, later King George VI.

Then in her early 20s, the Duchess of York is depicted seated in an armchair with green sash draped over the back. She is holding white gloves and a straw hat hangs from her arm.

The painting, possibly commissioned by the subject, was the work of Russian artist Savley Sorine, who trained at the Imperial Academy of Fine Arts in St Petersburg before moving to Paris.

An exhibition of Sorine’s work in London that year may have provided the motivation for the commission. 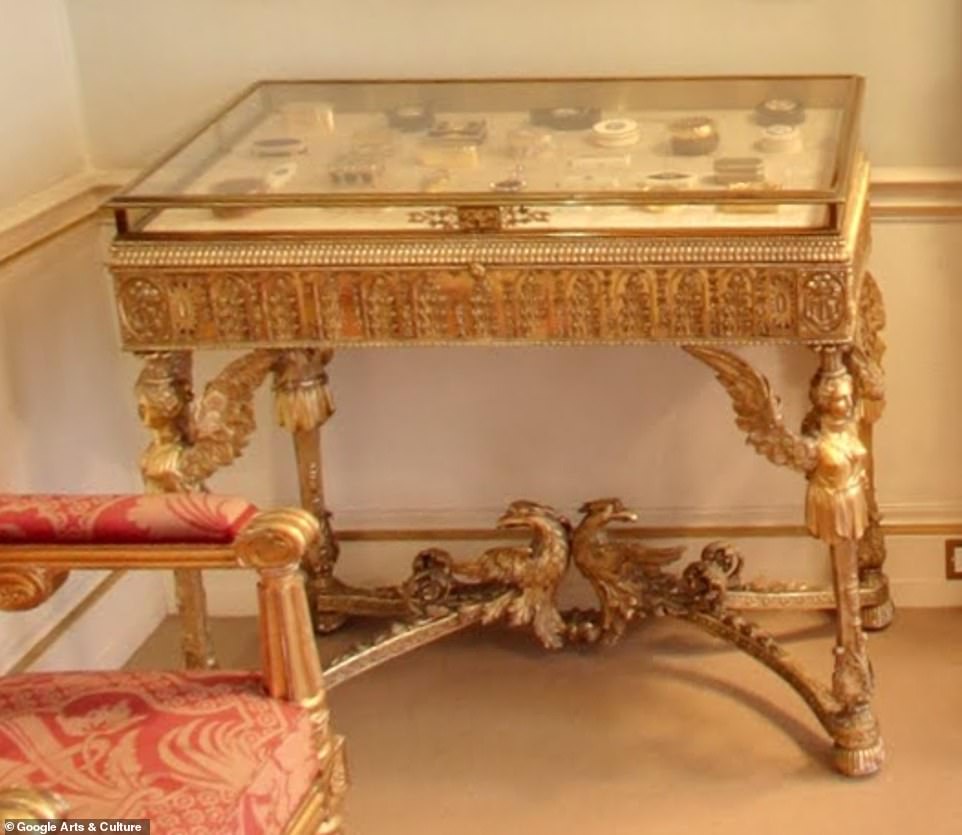 Showcase: This display table is part of a pair designed and made by William Gates in the late 1770s

This display table is part of a pair designed and made by William Gates in the late 1770s.

It is thought they at one point furnished the apartment of George IV (then Prince of Wales), which his father King George III had ordered as part of the construction of a new wing on the north side of Buckingham House.

Today the gilded display cases, which feature carved legs and a hinged tops, are used to showcase various items in the Library at Clarence House. It is thought these pieces were originally built with marble tops and later replaced with glass.

The second display table is located on the other side of the door in the library. 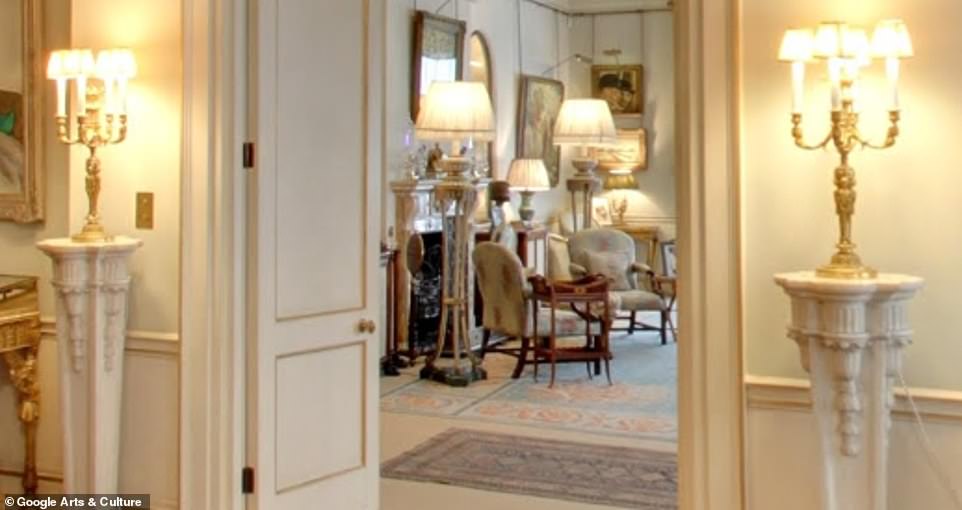 Ornate lighting: Stationed either side of the double doors to the Morning Room are a pair of ornate gilded bronze candelabra

On either side of the double doors leading out to the Morning Room are a pair of ornate gilded bronze candelabra dated to between 1770 and 1770.

The four-light candelabra each feature a baluster shaft, surmounted by an urn, with reeded, acanthus scroll branches, terminating in Egyptian masks, the lower stem with Egyptian terms and circular, domed foot cast with acanthus.

The provenance of the candelabra is not known but they were included in a 1827-1833 inventory of some of the royal family’s clocks, vases, candelabra and other miscellaneous items. 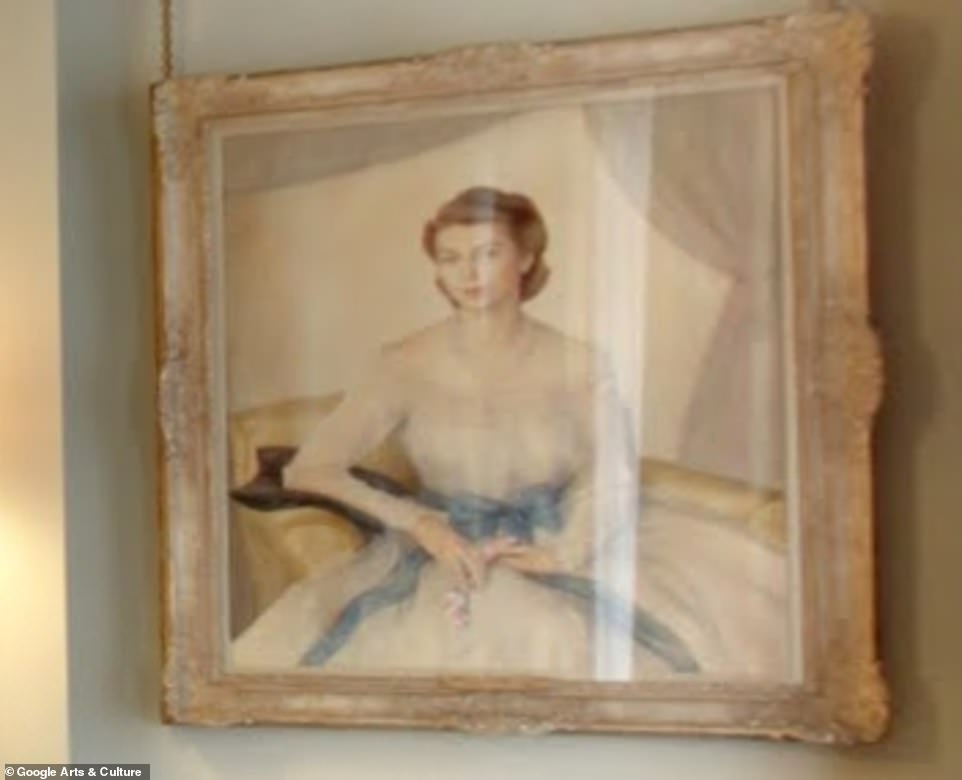 Young princess: This 1948 portrait of the then Princess Elizabeth was commissioned by her mother, then Queen Elizabeth

On the opposite side of the door to her mother’s portrait hangs one of the then Princess Elizabeth, dated 1948.

The portrait by Russian artist Savley Sorine was commissioned by the princess’s mother, then Queen Elizabeth. It was completed the year after Princess Elizabeth married the Duke of Edinburgh at Westminster Abbey.

The composition is typical of Sorine’s work and features a similar cool colour palette to her mother’s matching portrait.

The princess is depicted wearing a white chiffon decollete dress with a blue sash tied in a bow around her waist and a double string of pearls around her neck.